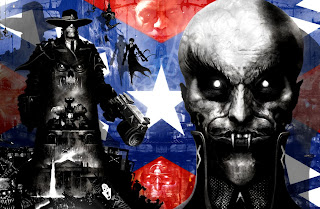 Here's Clint Langley's spooktastic cover for Prog 1674 featuring terrifying Doktor Grobari! The doctor is the head of the G-Men, the police force of the Terran Government of Mars.

The Doktor is a creepy, floating, bulbous headed, winkle picker wearing freak, so one can't help but think of Reeves and Mortimer's skit of Lloyd Grossman of Masterchef! Apologies to Clint and Pat!

Also on the cover we see police chief Inspector Sturn, who has a Dredd-like chin to die for! Clint's fantastic futuristic work on ABC Warriors and his depiction of Sturn makes me really want to see him have another crack at doing a Dredd story. Imagine the image below but set in one of those Martian Cities, perfect! 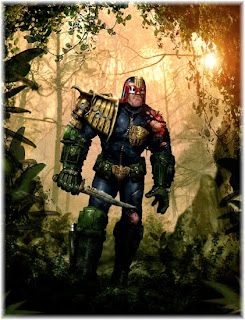 Finally, I wanted to include the Star Scan from Prog 1665 last year. I loved this Amber Smuggler image of Slaine and thought it'd make a cracking cover. I am, however, a huge fan of Star Scans too and will do a feature on them in a future blog entry... 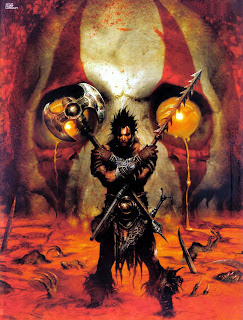 Thanks yet again to Clint. Remember to visit his site here.
Posted by Pete Wells at 03:55 2 comments: 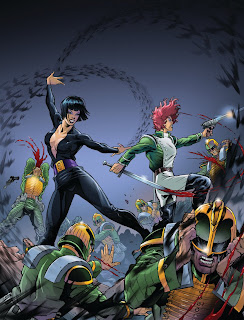 Ah, the beautiful Blood Sisters cover of Prog 1672 featuring Romanov and Makarov fighting side by side! This awesome cover by Richard Elson is a representation of John Burns' fantastic centre pages, double page splash (I feel like I'm 10 years old again, three cheers for Tharg!)

I asked Rich if he'd seen John's page before undertaking the cover as the two complement each other so well. Rather modestly, the man who has produced some of the finest 2000AD artwork in recent years said, "Matt did send over the brilliant John Burns double page spread for reference when he asked me to do the cover. Obviously, that was a bit intimidating. John Burns is the consummate draughtsman. I am in awe of the man's ability." I don't think he needed to worry too much, I'm sure you'll agree.

With regard to the printed cover, it's a shame the 2000AD Logo has a big black background this week as it really obscures Lulu's beasties. I'd have loved to have seen them looping behind and in front of the 2000AD logo.

If, like me, you're missing Mr Elson's work in the prog, then fear not, he's doing something for 2000AD while working on things for Marvel - phew!

Below we have Richard's roughs followed by those absolutely beautiful inks. 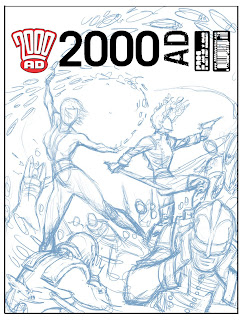 With regard to the inks, Richard just inks on top of the roughs, there's no intermediate stage between the two, the talented beggar! 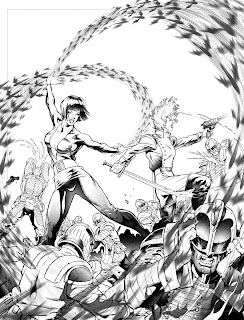 Thanks once again to Richard for sending these, they really are appreciated by me and I'm sure all that read this blog!
Posted by Pete Wells at 04:54 1 comment: 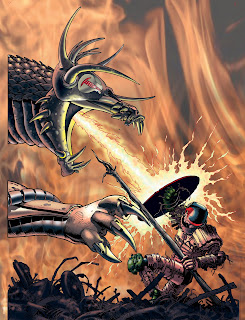 At last, a cover by the legend that is Cliff Robinson! Cliff is among a handful of classic, iconic 2000AD artists who, thankfully, still produces work for the galaxy's greatest today. And what amazing work it is!

Cliff is responsible for well over 100 covers for the mighty House of Tharg, many of them being among the most iconic, enduring and memorable in 2000AD's long history. His depictions of Dredd are impeccable, and because of this grace 2000AD merchandise for everything from poster flags to geometry sets to bobble heads to socks! I have a Cliff special planned very soon where I will be highlighting many of his amazing covers.

Onto Prog 1671, which features this wonderfully composed and executed cover showing our favourite law man battling a Cursed Earth dragon. This was for the story Dragon's Den, a cracking Gordon Rennie scripted tale which saw Cliff on art duties for the first two parts and P.J. Holden for the second half of the story.

Above we have the finished version of the cover and below the roughs... 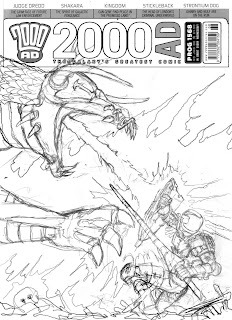 Cliff said "I based Dredd's makeshift armour on P.J.'s design after he emailed me the pencils of that lovely splash page of Dredd from episode 3." Thanks to P.J. for sending those pencils...

And, of course, the finished inks.

Which brings us to Cliff's beautiful finished line work. Cliff notes "You may notice on my original line art, I (for some weird reason) thought it would be a 'good idea' for Dredd to have (what looks like) a washing up drainage rack on his left shoulder pad. I'm not sure just how much more protection that would have afforded him though. I must have been on the wine when I came up with that amazing idea. I got rid of it once I'd come to my senses!" 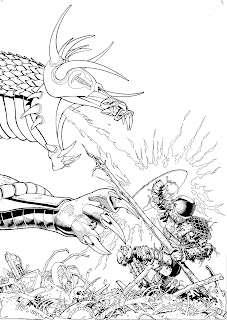 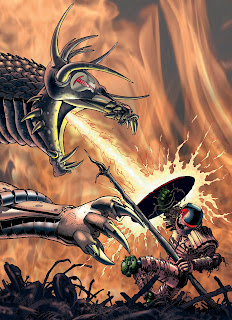 Breathtaking stuff! Thanks to Cliff for being so generous with his time, he really is a star. Please check out his superb blog here, the banner is particularly nice...
Posted by Pete Wells at 11:18 3 comments: 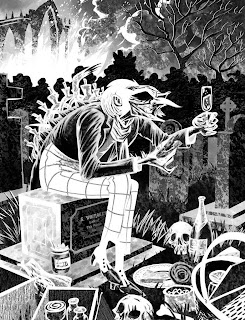 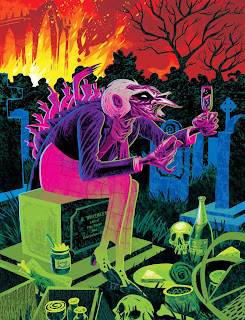 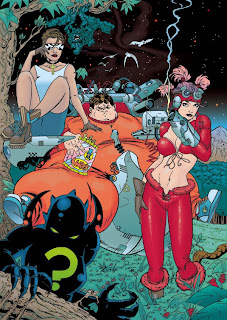 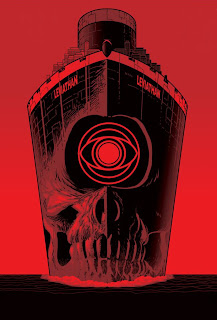 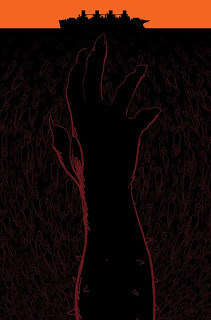 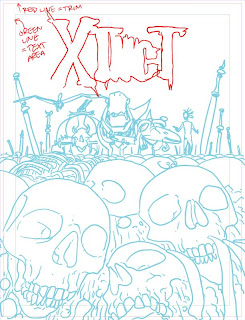 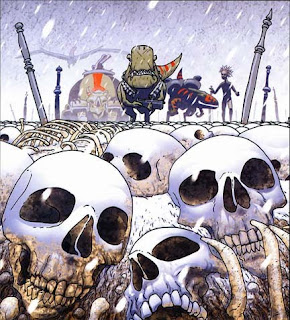 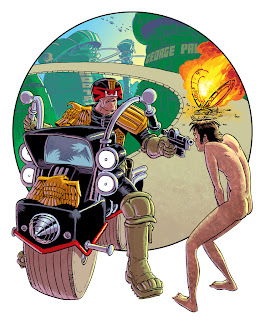 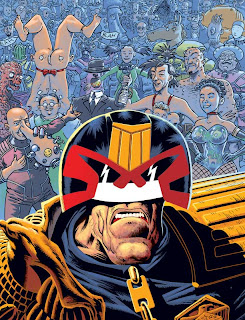 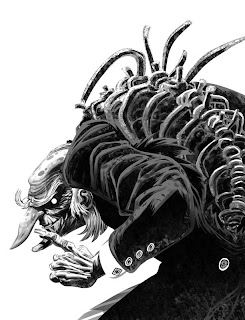 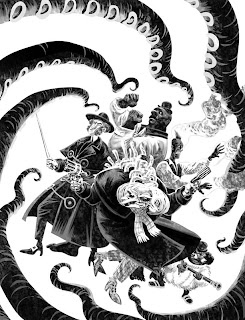 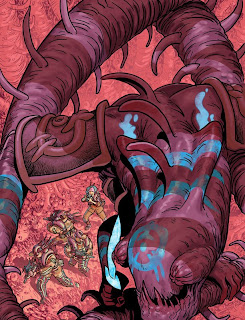 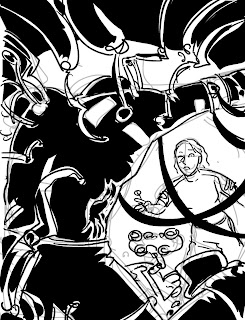 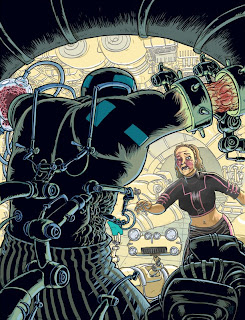 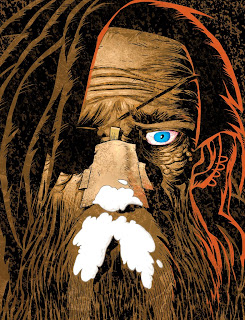 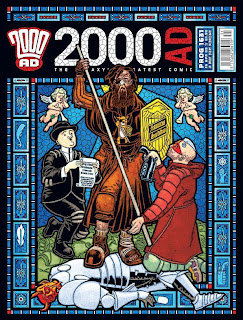 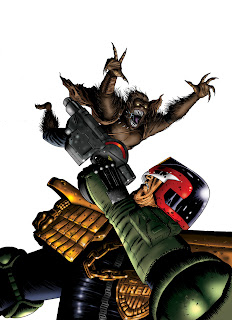 Defoe and Dredd artdroid Leigh Gallagher has posted an excellent 'making of' the current Megazine cover on his fantastic blog. The post contains his roughs, pencils, inks, colours and even a bit of Barry White.

You'll find the post here, thanks to Leigh for sharing. 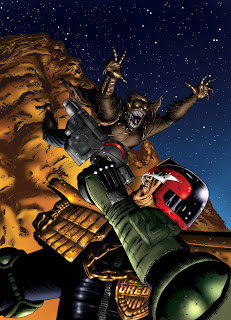