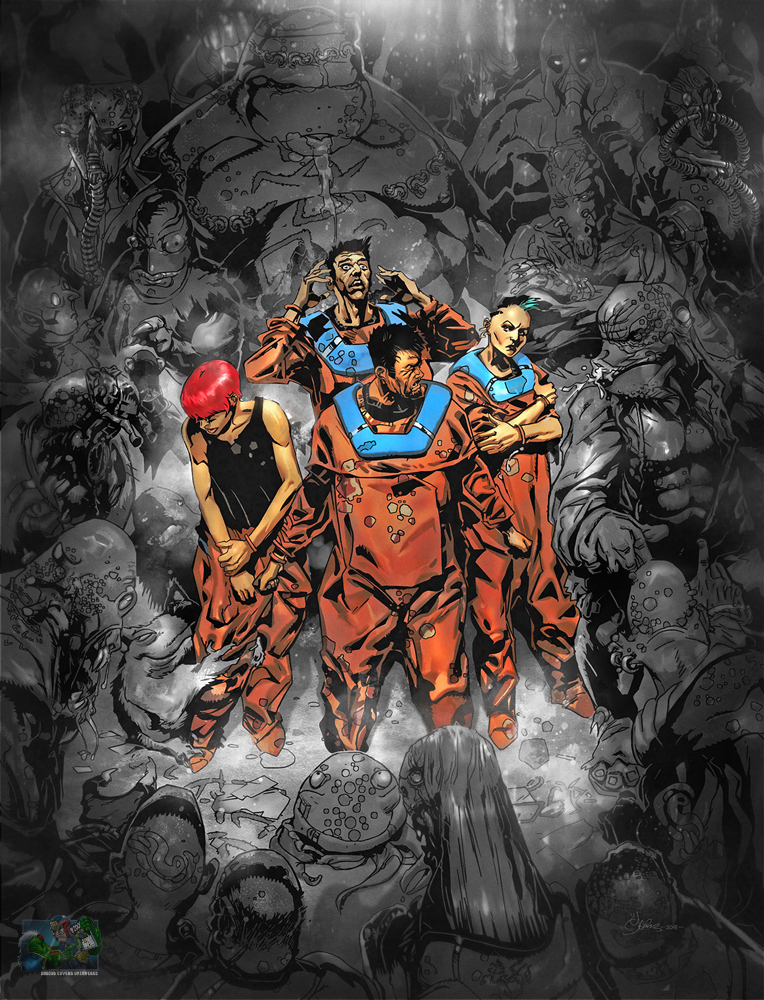 Yay, it's a Mark Harrison cover for Prog 1928! I always enjoy a cover from Mark as, like his artwork, his write-ups are always brimming with extras and cool little titbits! Mark is back on art duties for Grey Area, which has hilariously seen our heroes trapped in immigration on the doomed planet of Homeworld.
Over to Mark to tell us more "This was another "I knew exactly what I wanted from the get-go" cover. Tharg wanted the Grey Area team on the cover, possibly surrounded by aliens and I recall those great covers in the past by Brian Bolland and Colin MacNeil of a character surrounded by a crowd..."
﻿ 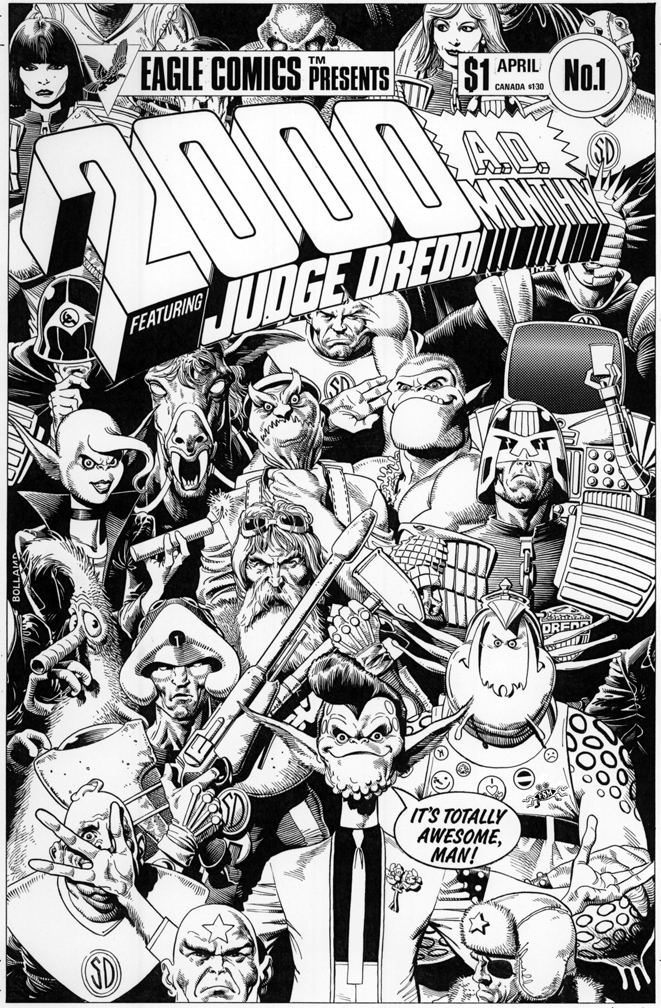 Walter got on the cover by bwibing Tharg with that polystyrene cup... 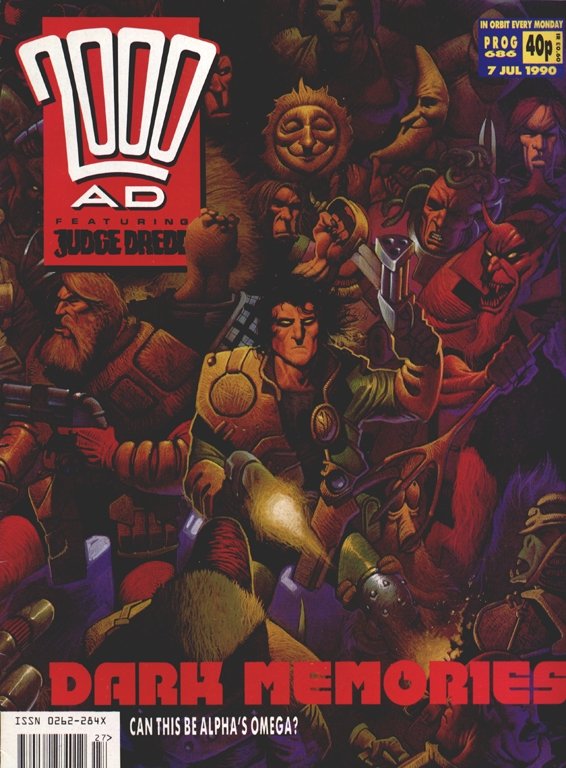 Sniff! Painful memories...
"Here I wanted to deliberately play with colour and have a pun to boot; namely the "Grey Area" is literally a grey palette, the only colour being provided by the role reversal of the team. They are hemmed in, alone in this part of the galaxy, feeling vulnerable, defiant, and Kymn has got a sense of the horror yet to come."
Here's Mark's sketch for the cover, it looks like a night out in Newcastle... 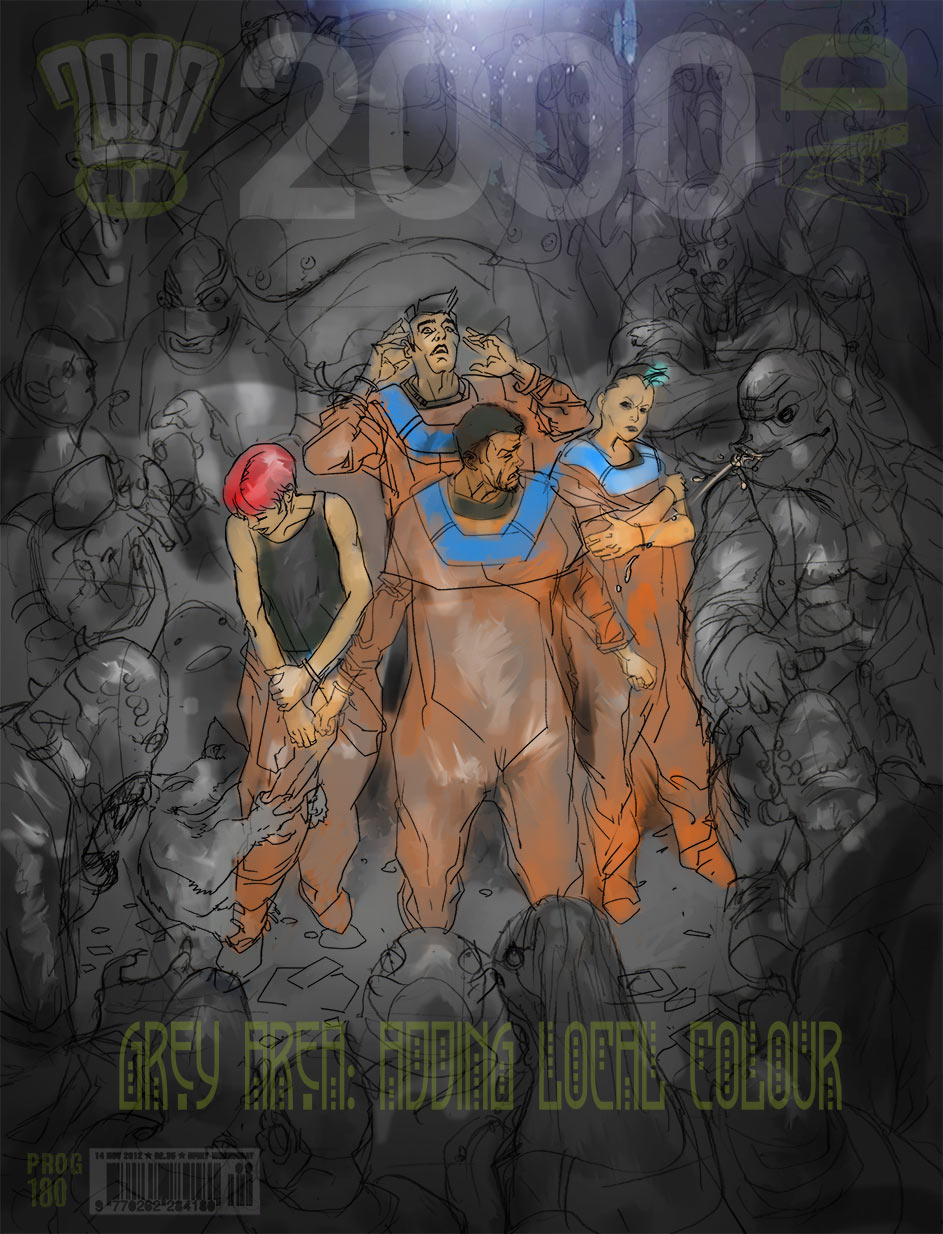 ﻿
The Dean Gaffney appreciation society meeting
Mark talked about the fantastic way in which the story opened, back in Prog 1924 "I loved the concept that Dan came up with, that he found a way to flip the roles and have the ETC officers as the "aliens". It was a tricky first episode to do, mostly with silhouettes. Even had the Logo for "Grey Area" in an alien language to slightly baffle the reader."
"It's actually Kilngon; I had no idea that one of those online language translators did Klingon!  There was a brief internal debate as to whether this breached any kind of copyright, but it turns out you can't copyright letters- even made up ones and especially used as words." 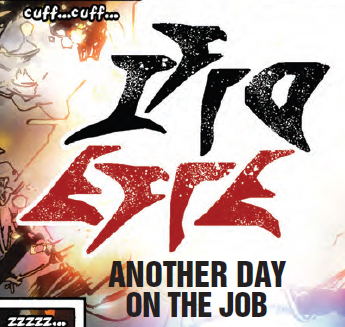 Ifra Exre, one of my favourites! 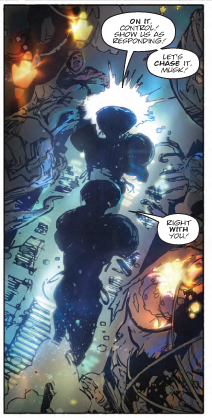 ﻿"Behold! This Grey Area strip is actually... Grey Area!" (Dun, dun, duuuuuuun!"
"Kinda disappointed the page layout of the final comic and introduction robbed the strip of the surprise factor; we really wanted the readers to be scratching their heads and have this slowly dawn on them and have the reveal this wasn't earth ETC you were following in silhouette but alien!
But hey, that's life in the big world of comics..."
"On the cover my fave bit is the little furry alien humping a nervous Birdies leg. I had it do the same to a War of the Worlds alien in last weeks episode in the food line up but it was probably too subtle. I've been having fun adding little nuances to the alien life and not just making it a cavalcade of weird faces and body shapes." 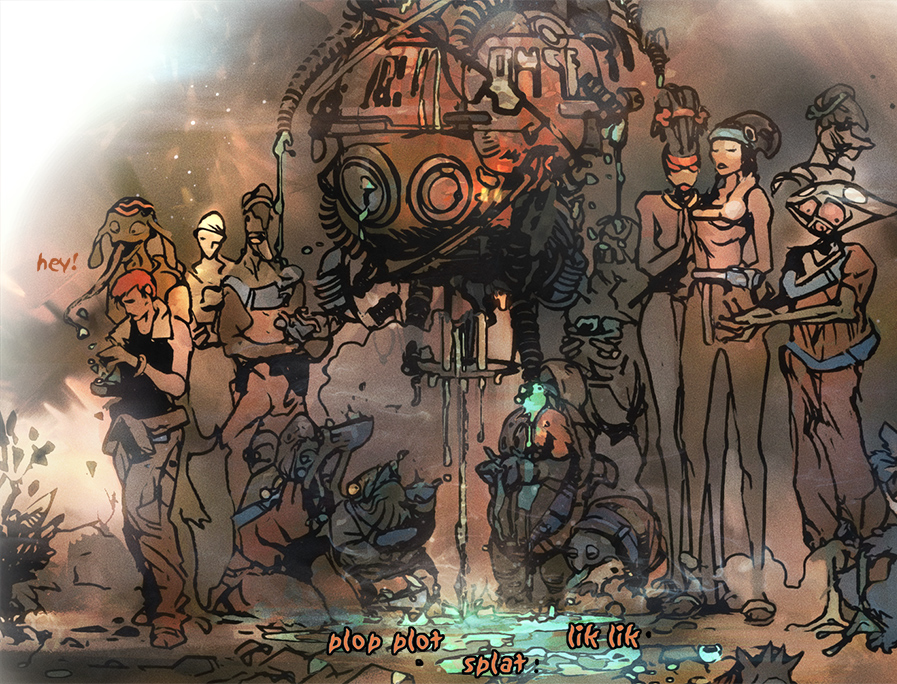 ﻿The 2000AD version of Nine and a Half Weeks...
Spoiler warning - there is some top quality leg humping to climax in this weeks' prog, disgusting!

"Gnuht!" indeed!
"I try to imbue the background characters with a sense of daily life, as if there is another story going on there, such as betting on the outcome of something bothering the foreground characters. The  sound effects (Richard Corben influence), shouts, calls, a vibrant place in a world of comfortable entropy."
"If I had more time I'd make more of a thread of these things. The inspiration comes from the Studio Ghibli films like Spirited Away where you see minor characters doing their own thing in a corner of the frame." 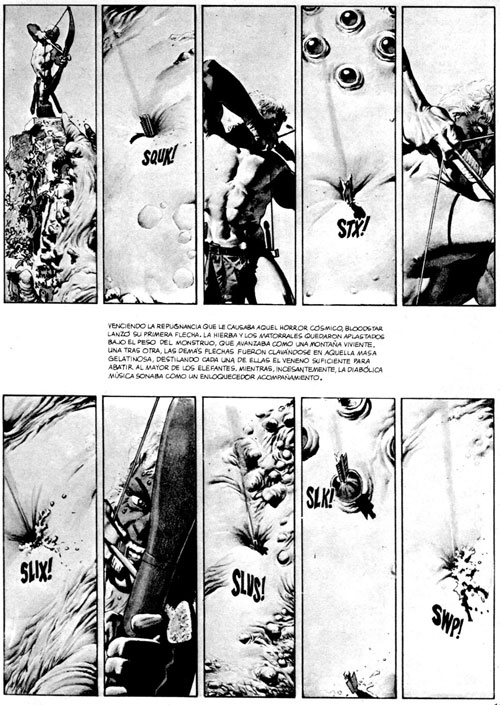 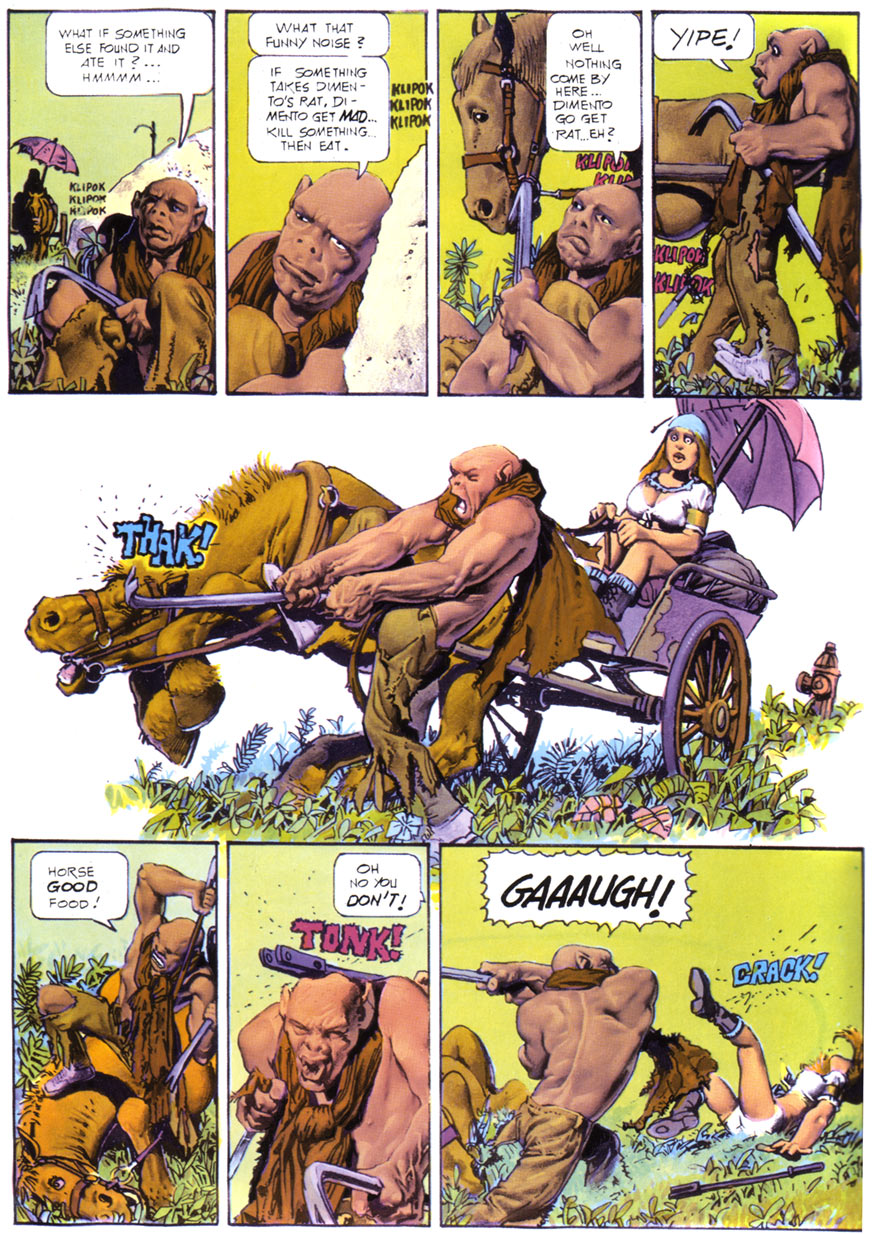 Dimento is a bit demented!
As an extremely experienced concept artist, Mark is incredibly adept at world building, just check out some of his concept work on his site, it's amazing!
He says "World building is something I love doing on the stories I've worked on. This current run of Grey Area is no different. The Idea for the Harmonious Free was sort of Hippie culture Native American (Hopi tribe), very laid back, sunbathing, in touch with nature and each other through telepathy and telekinesis. I did a bit of research and  chose the three figured hand as the races icon which in itself is derived from the similar looking "Hand Nebula" that dominates the sky (okay- there's a bit of Logan's Run ref there too!)"
"The HF don't do much in the way of maintenance of their cities or infrastructure; there is a "It was it's time to fail" attitude so most of the city is crumbling and the Grey Area is located in ruins or retrofitted parts of the city."

﻿What a shithole
"Also, looking to ancient cultures, I was surprised how sex obsessed most of the imagery is. Everything is phallic or vaginal. So I put that into the strip too in buildings, doorways, clothing, etc.
Hopefully it hasn't been too obvious and detracted too much from the strip. ;)  Actually the nudity was carefully discussed as I wanted to go even more with decorative codpieces but we toned it back.  I hope I've struck a non-sexual National Geographic tone. This is an alien race with different values.
It's not smut it's culture will be my defense which dovetails nicely with my other response "It's not porn, its reference!" (Try claiming THAT as a Tax expense!)" I've tried - Pete.
"Art wise it's a lovely learning process as I become more confident in "Spotting the blacks". I've  come to realise the brilliance and skill needed to pull off silhouettes and shadow work in comics which you will see more of in my work. That's what I love about this job and working for 2000 AD. It allows you to develop and try new things (Like this Guardians of the Galaxy wallpaper I did for myself- love that film!)" 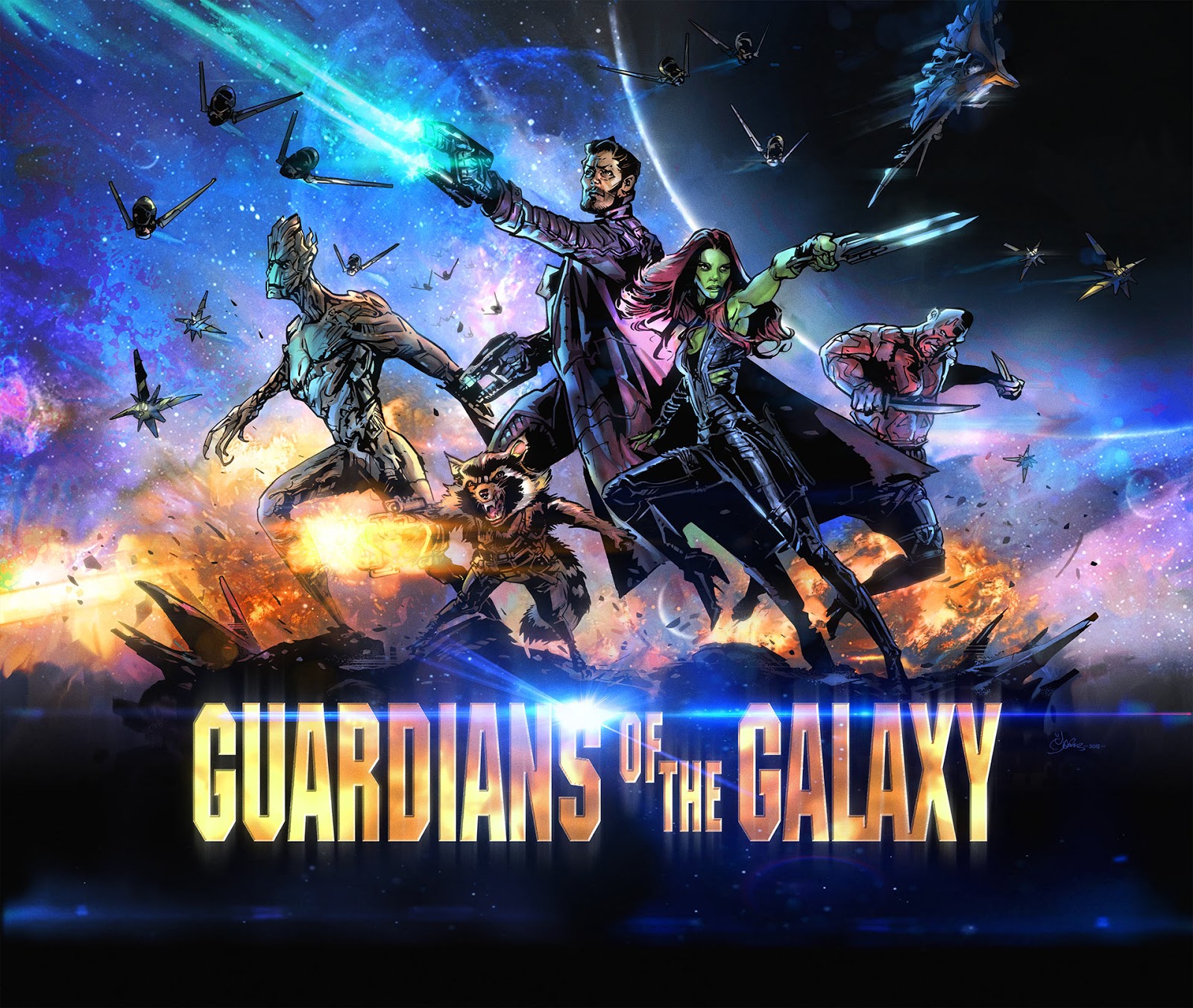 ﻿
"I am Groot!"
"I'm always learning and at my age that's pretty wonderful. Maybe I should just settle on a style (and get good at it!) but I just love the process. It's a new challenge every script  such as the latest one I have in front of me now which will have me referencing a favourite artist  from the past, Brian Lewis (as a sort of homage) Disgorged Nightmare Vision! No one will probably get it but that doesn't matter- it makes me happy!"
For those unsure of Brian's work, here are a couple of fantastic examples... 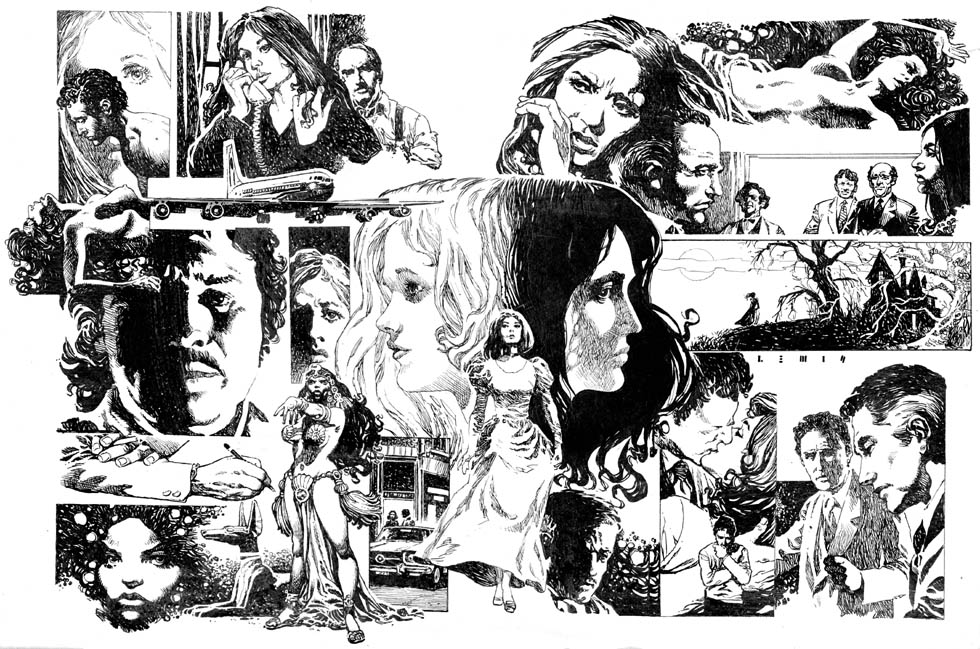 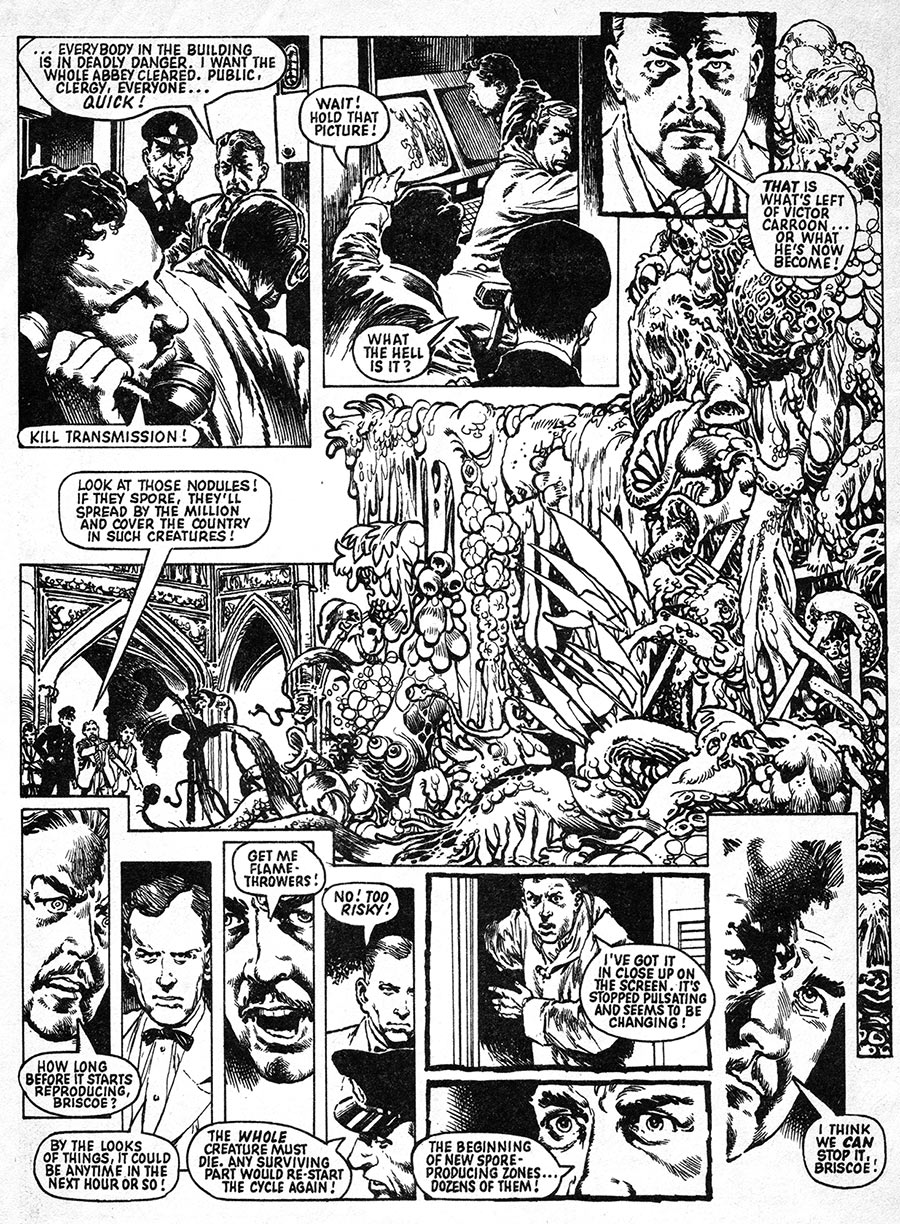 A Quatermass debate﻿
"I've always liked doing that,  throwing in in-jokes, monsters and aliens from the classic  film and TV of my past. If you think that looks like a Morlock from the Time Machine or a Draconian from Doctor Who you're probably right!"
So once again, here's that brilliant cover...

﻿
The clientele of your average comic shop
And here's how the cover looks on your local Thrillshelf... 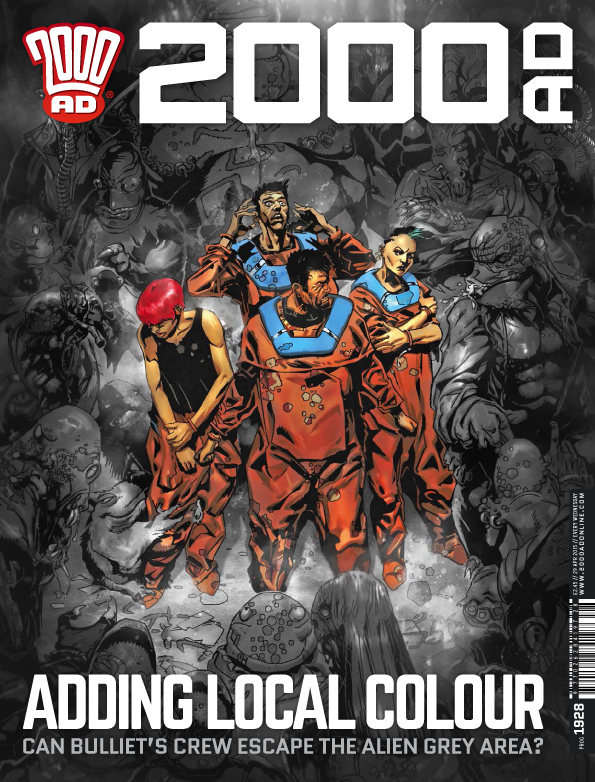 Yay, they used Mark's tagline!
Mark also go in touch to berate himself for his cover being too similar to this Best of 2000AD Special Edition back in 2000. I say poppycock!﻿ 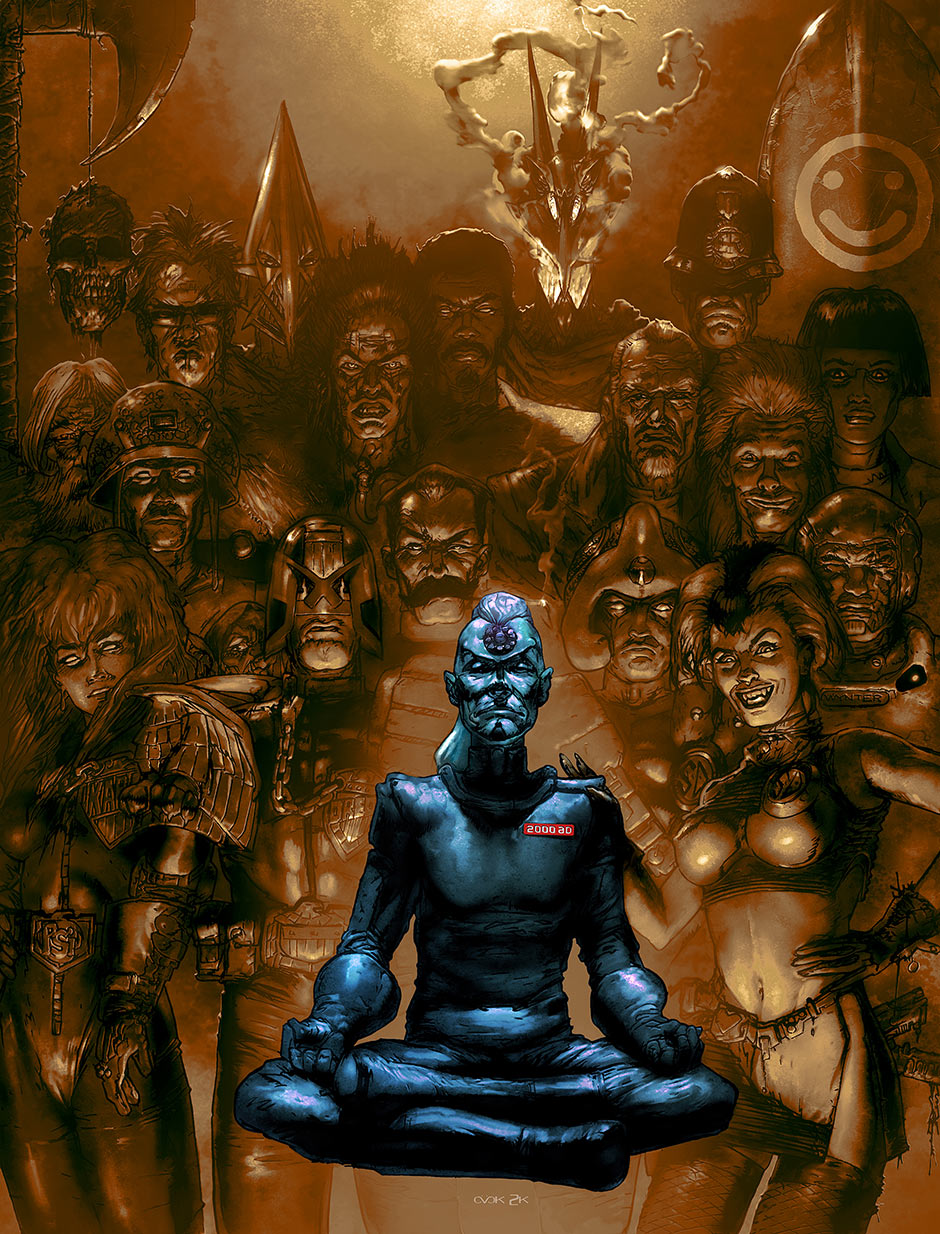 Hey Nemesis, no smoking!
Mark has also been hard at work on the most recent Zarjaz cover, but it NOW citizens!  http://www.futurequake.co.uk/shop.php 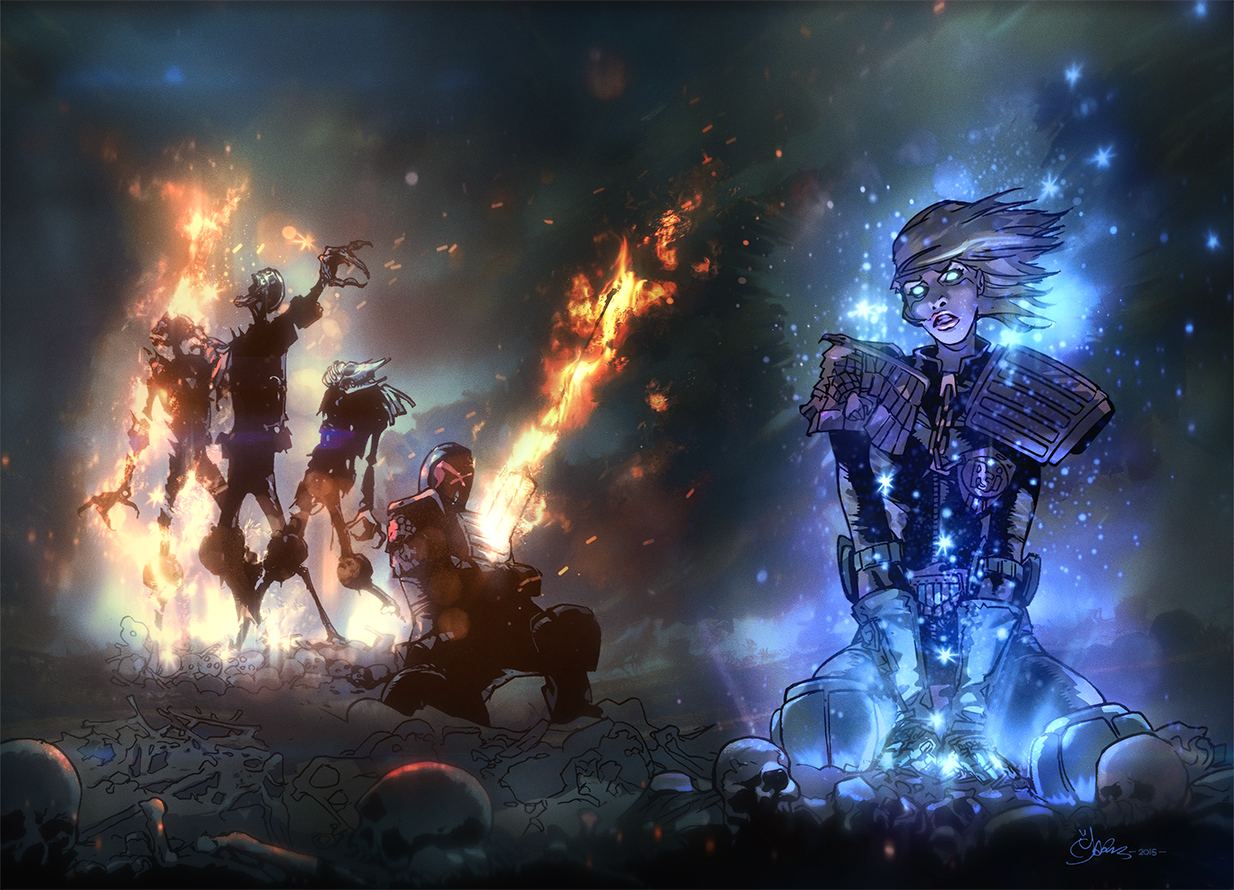 Deadworld REALLY needs a good hovering...
Huuuuge thanks to Mark for sending his fascinating commentary and pictures. PLEASE go over to his site and look at some of his work, it's superb. Here are some highlights, starting with a Dredd movie Dark Judges concept... 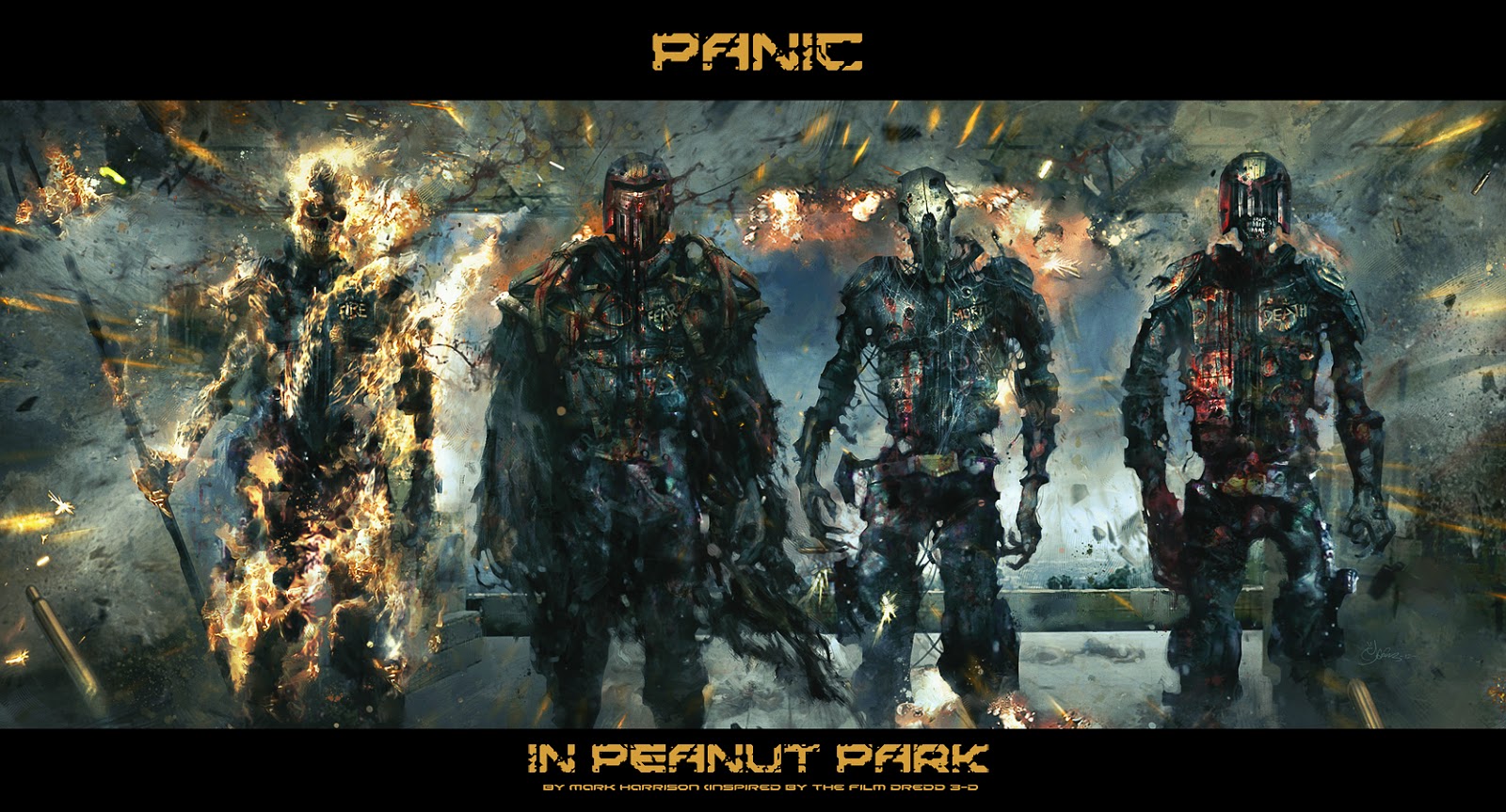 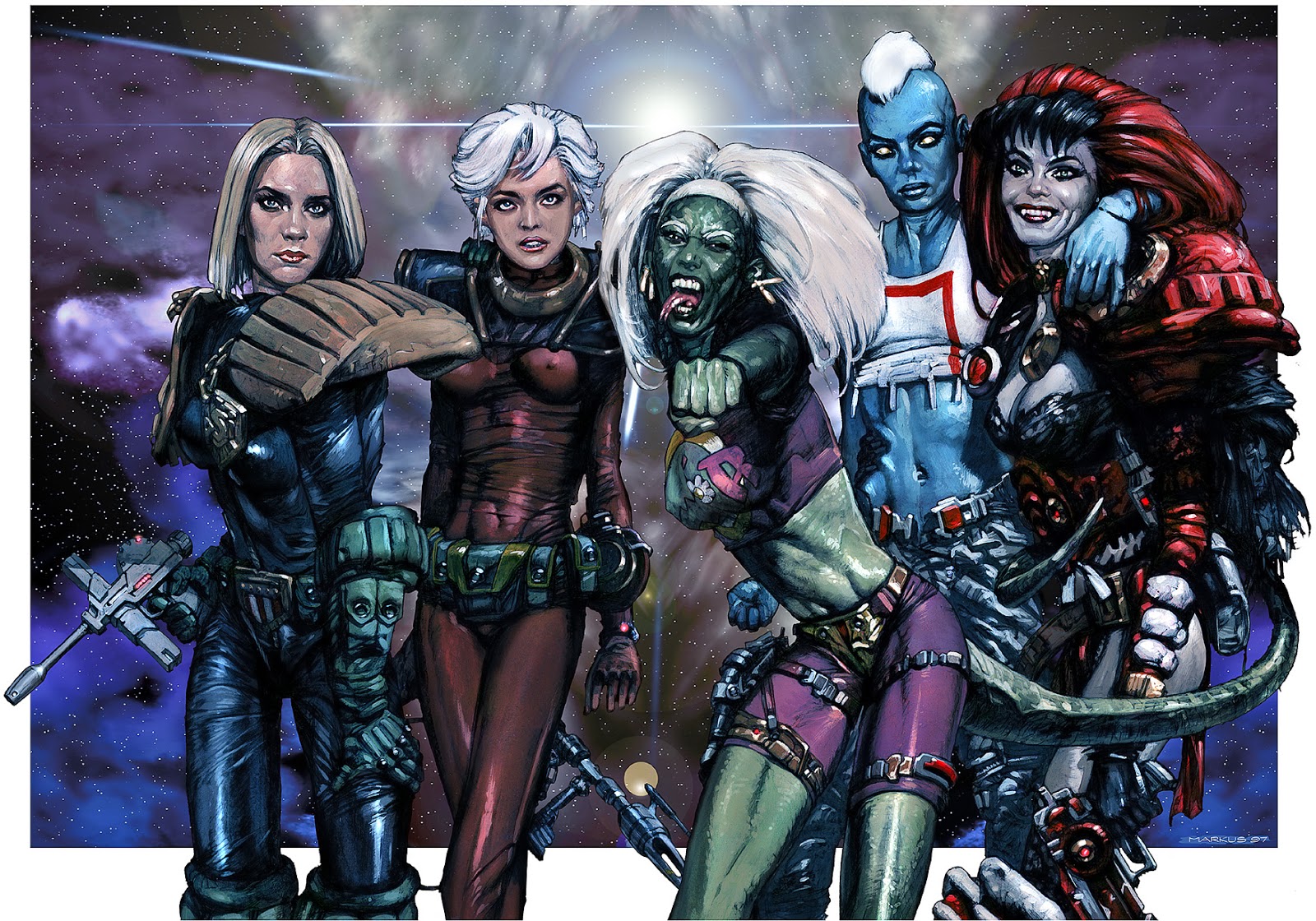 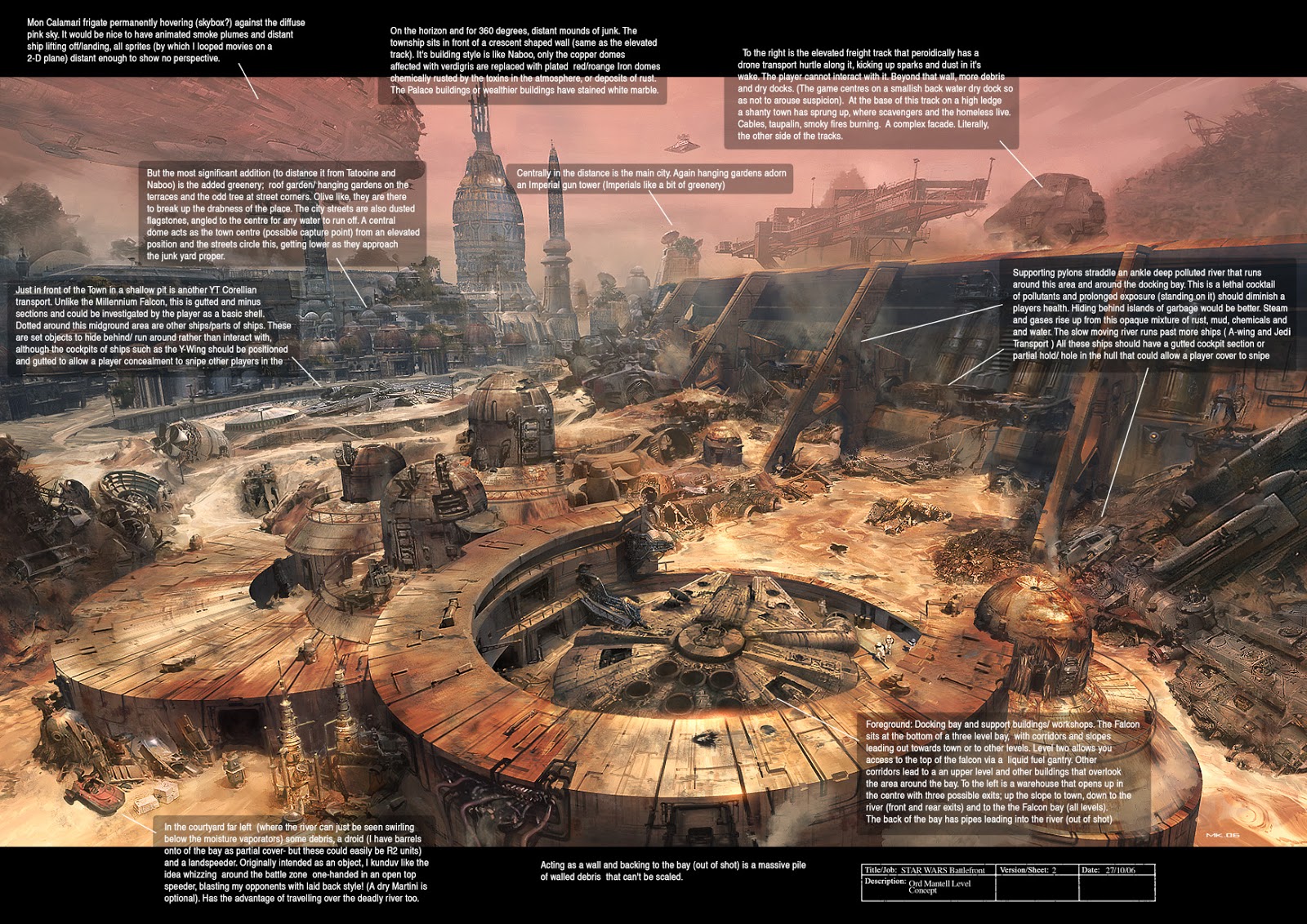 Fascinating Dredd concepts from the Dredd vs Zombies game (I assume?) 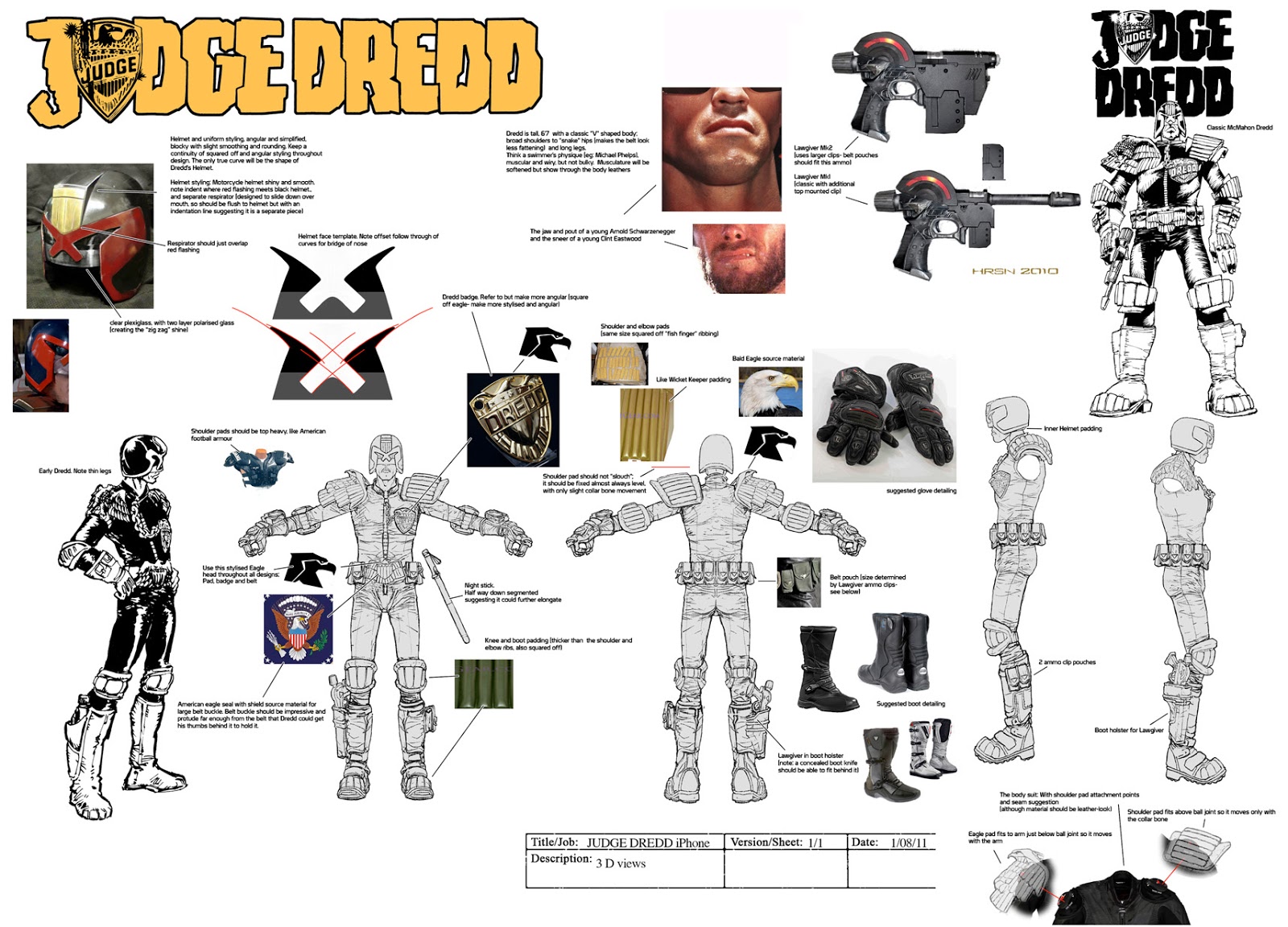 They forgot sock down the front of the bodysuit

And a brilliant study of a new strain of the 2T(Fru) T virus that affects robots!

The cure was to turn it off and then on again.
And finally a lovely Nemesis and Purity illustration, lovely! 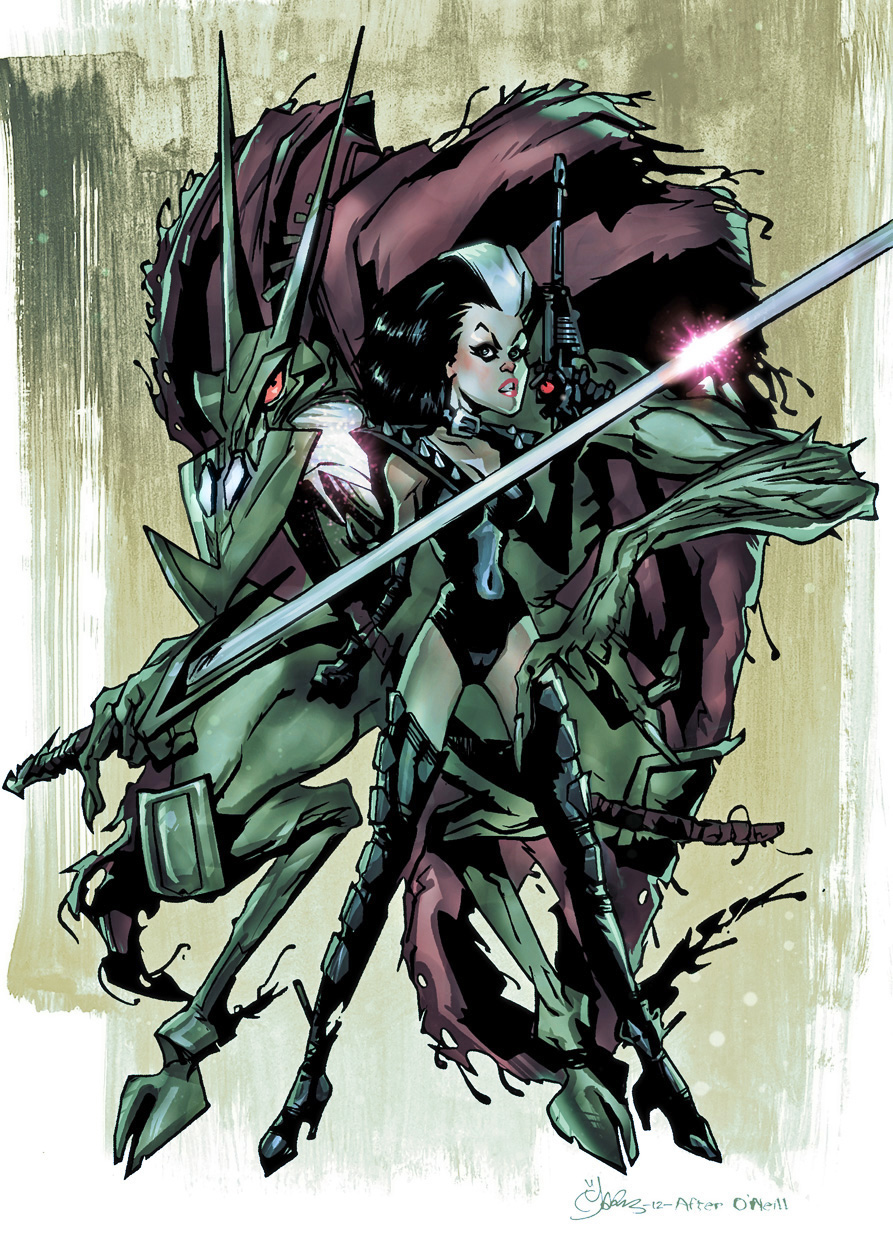