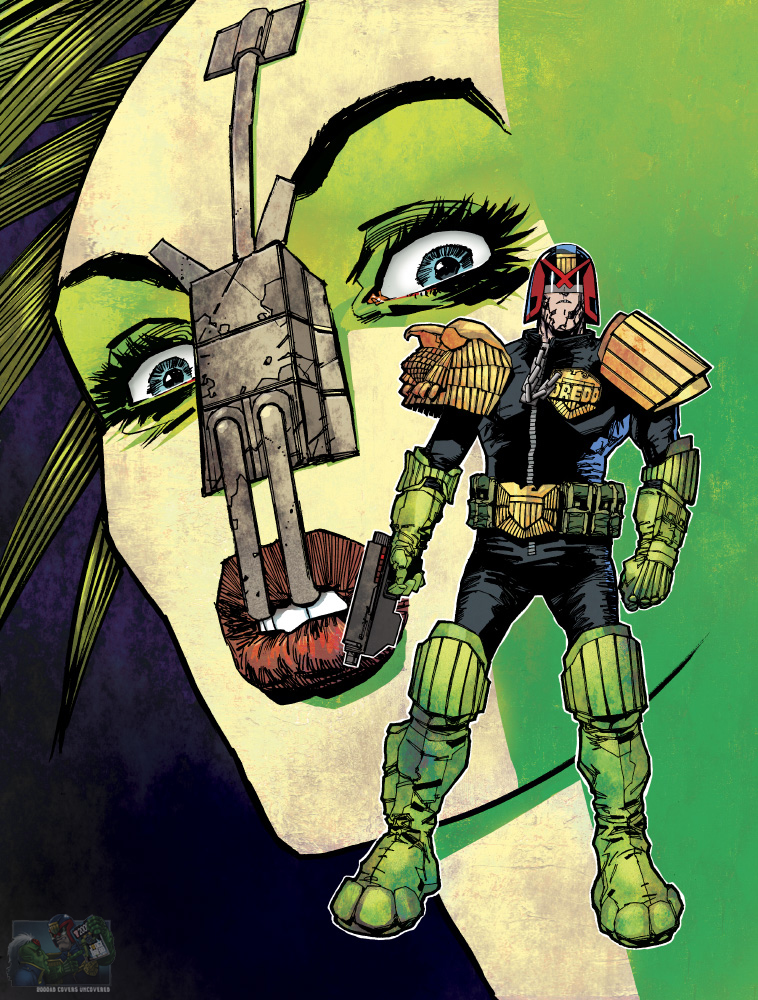 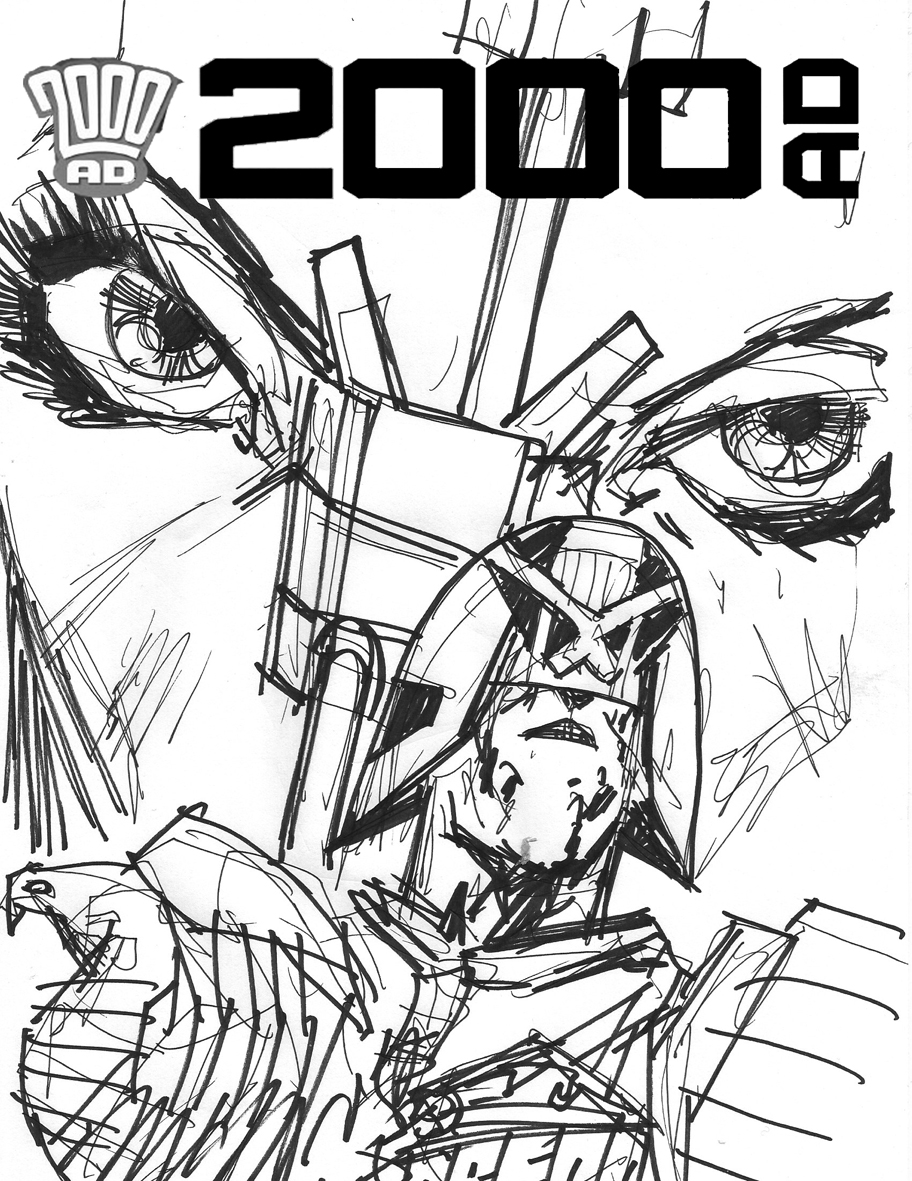 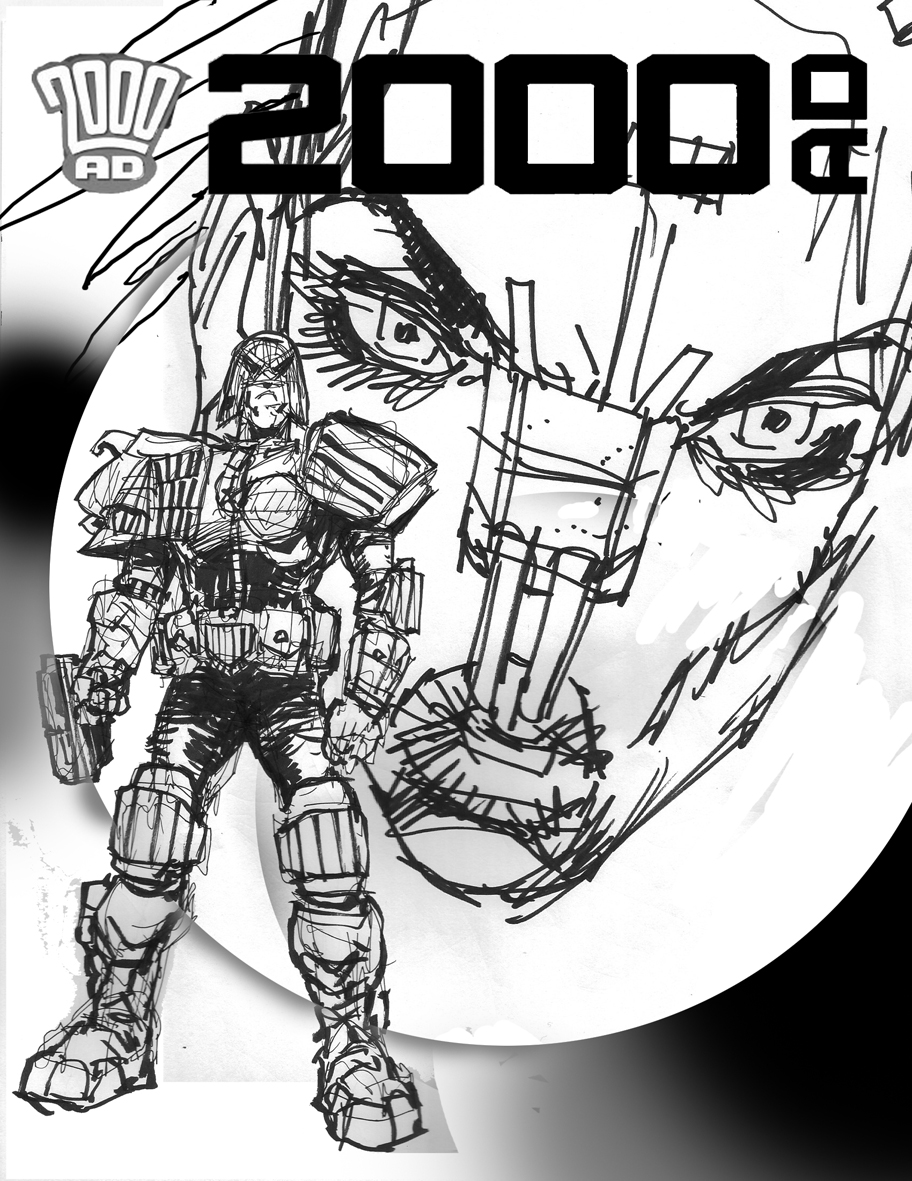 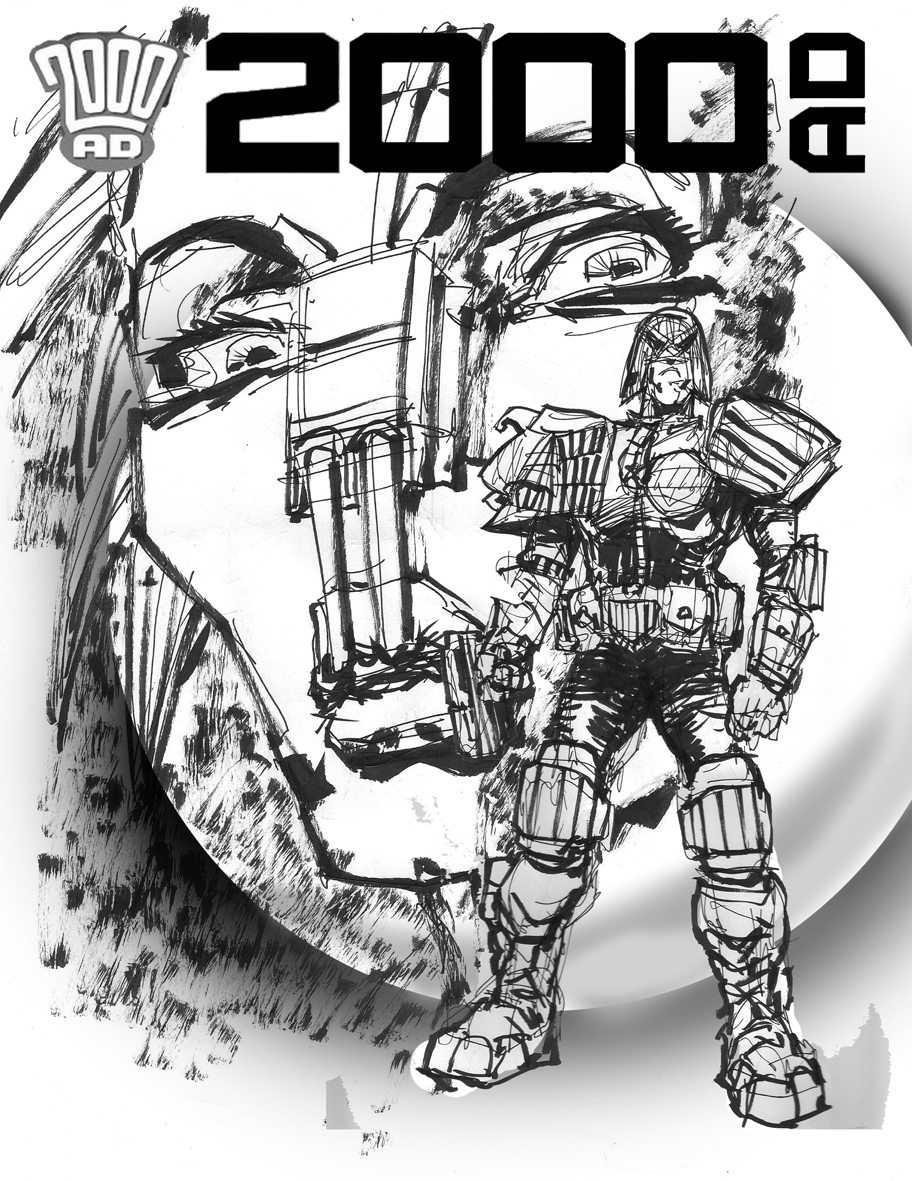 "Oh no she isn't!"
With the composition decided, Henry inks and colours the piece, sadly losing the moon in the background...﻿

﻿
It's a frigging nightmare when Aimee gets a cold...
Pye offered some wonderful bonus material for this post, he said "I have a slightly different version of this weeks cover that Henry sent. The cover of 1926 came in the same week I was redesigning the Newstand app advert and I needed a new Dredd image, so he modded it for me all special like so I could use it as a background! Excellent chap that Henry!"

I'm certain all readers would agree! 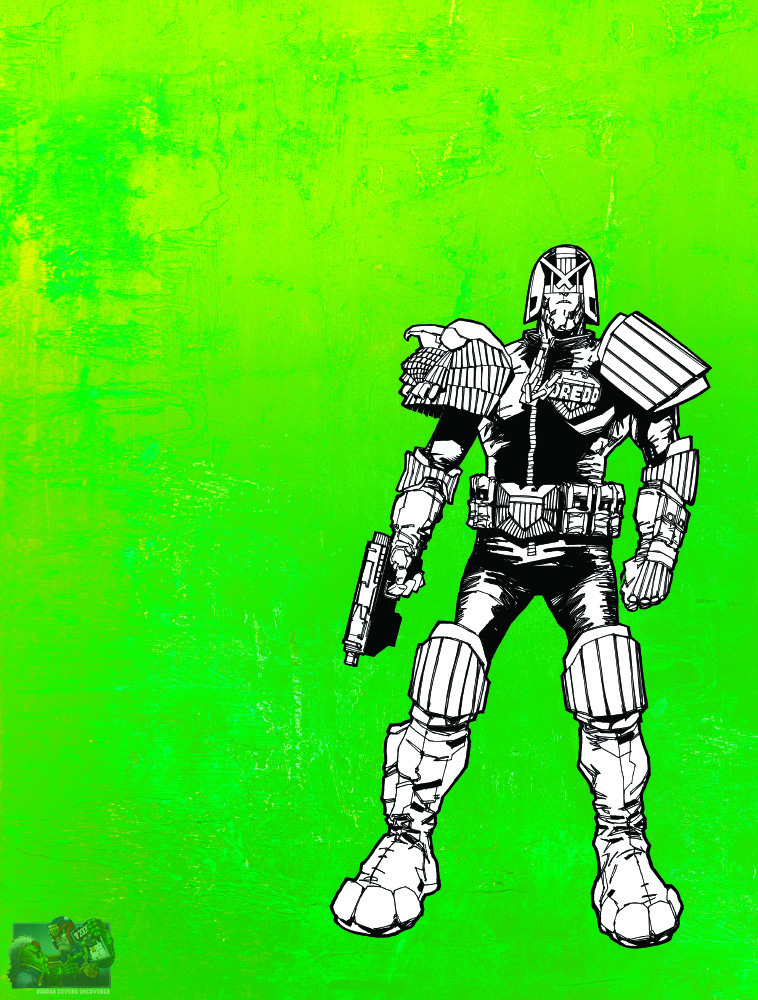 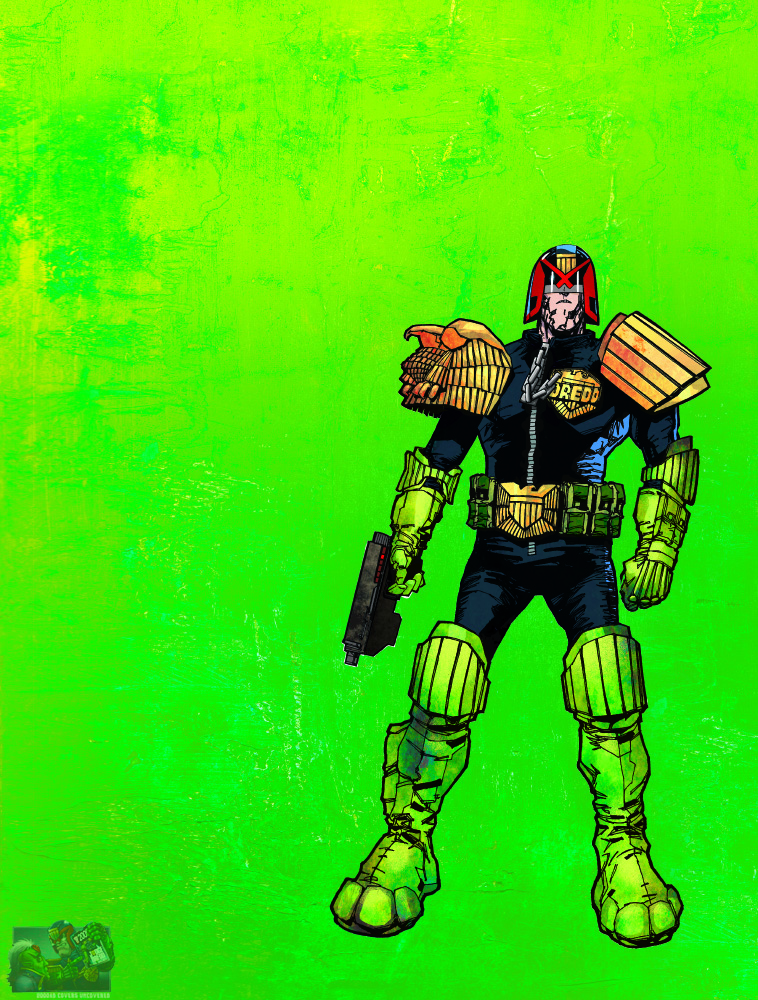 Rumour has it they were going to use Giant for this ad but weren't allowed.
We now interrupt this blog post for an ad break... 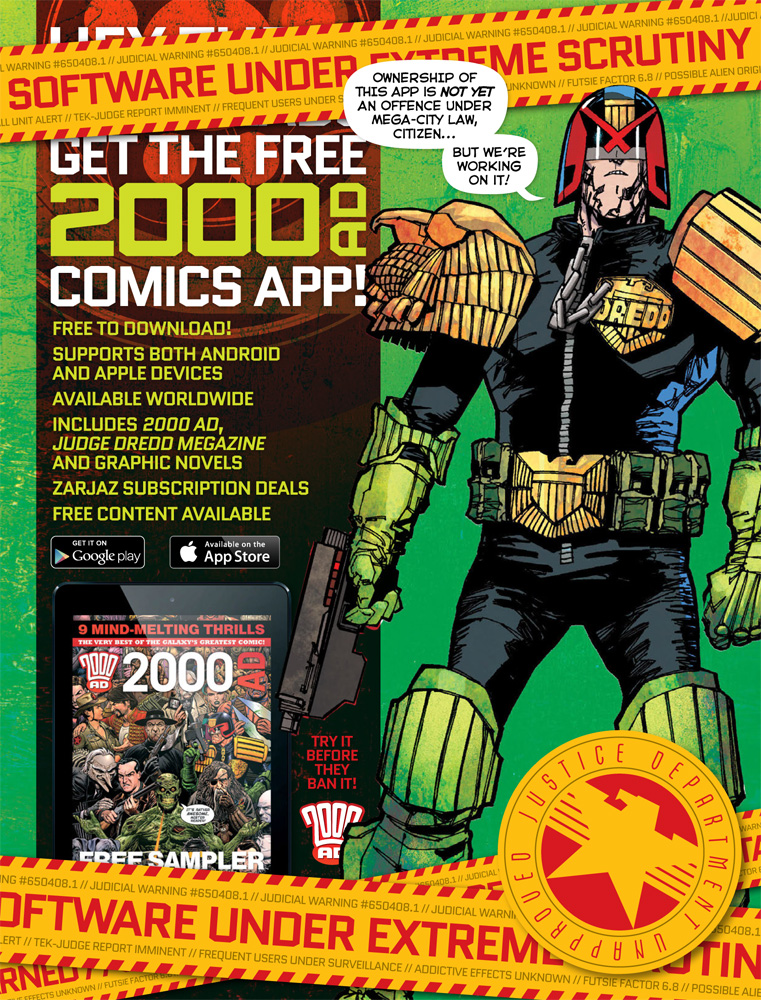 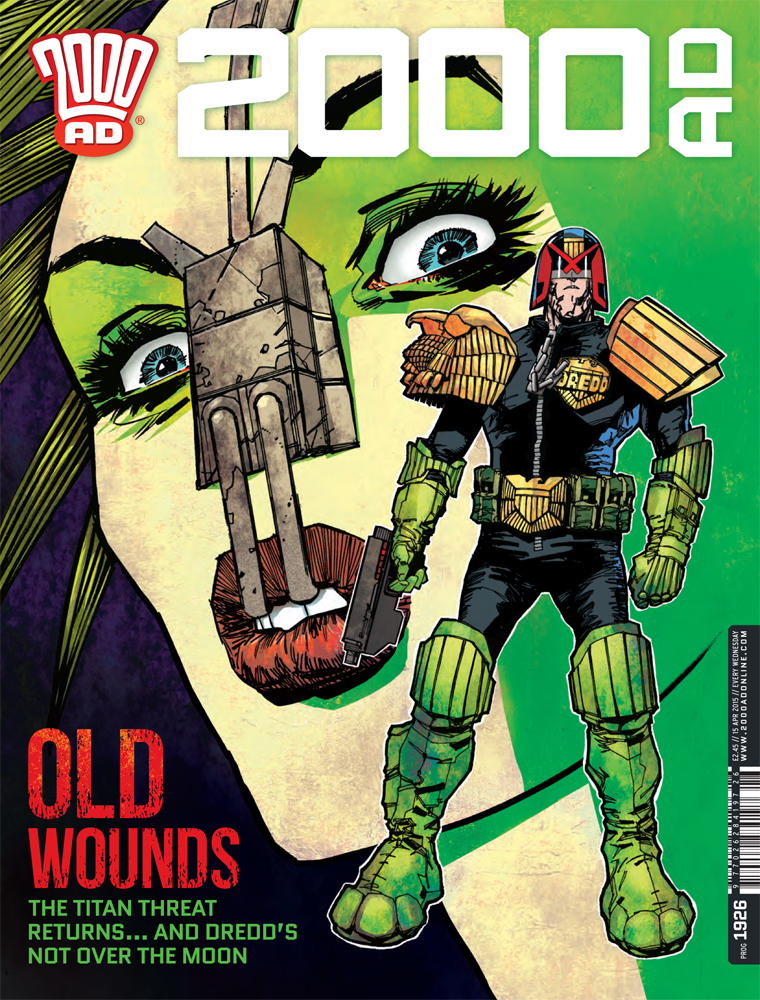 How does she smell? Awful!
Huge, huge thanks to both Henry and Pye for their support, I really thought this article wasn't gonna happen!﻿
+++ 2000AD Covers Uncovered Bonus feature +++
Enceladus Series Recap
Nixon, Gerhart and Titan.
Here's a reminder of the characters and events leading to the current storyline, for anyone who may be a little bewildered!
Nixon... 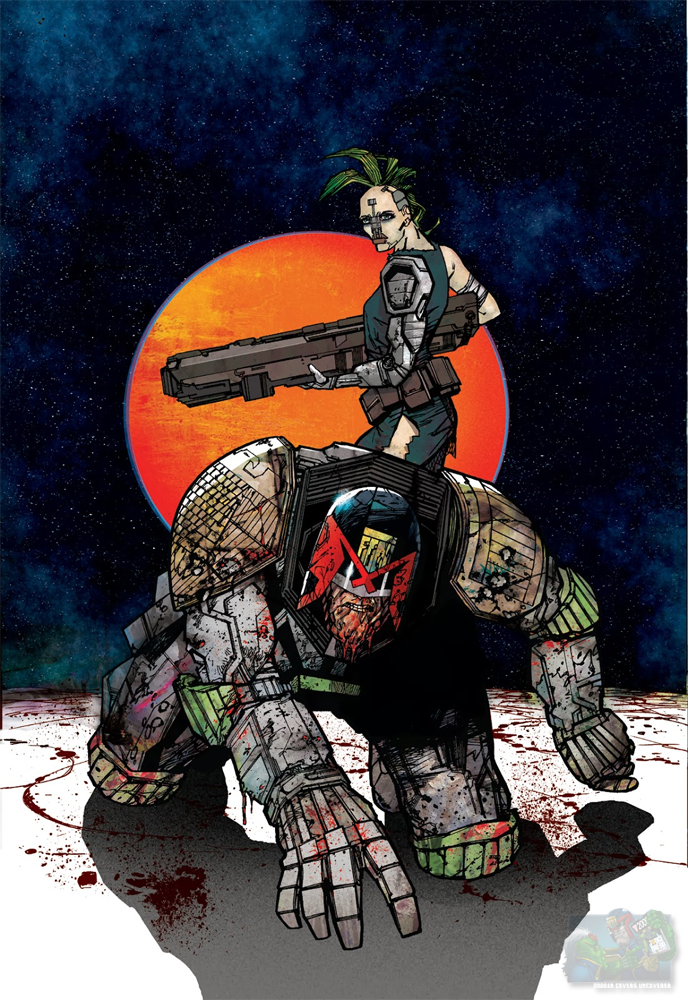 ﻿Dredd prepares for the mother of all enemas
Let's start with Aimee Nixon, Wally Squad Judge in the crime-riddled Low Life. Tough, jaded and uncompromising, Nixon voluntarily had an arm removed and replaced with robotics as part of her cover. During her miserable time in the Low Life, she had a run in with Dredd following a bombing in a Shopping Mall - let's just say the two didn't get on... 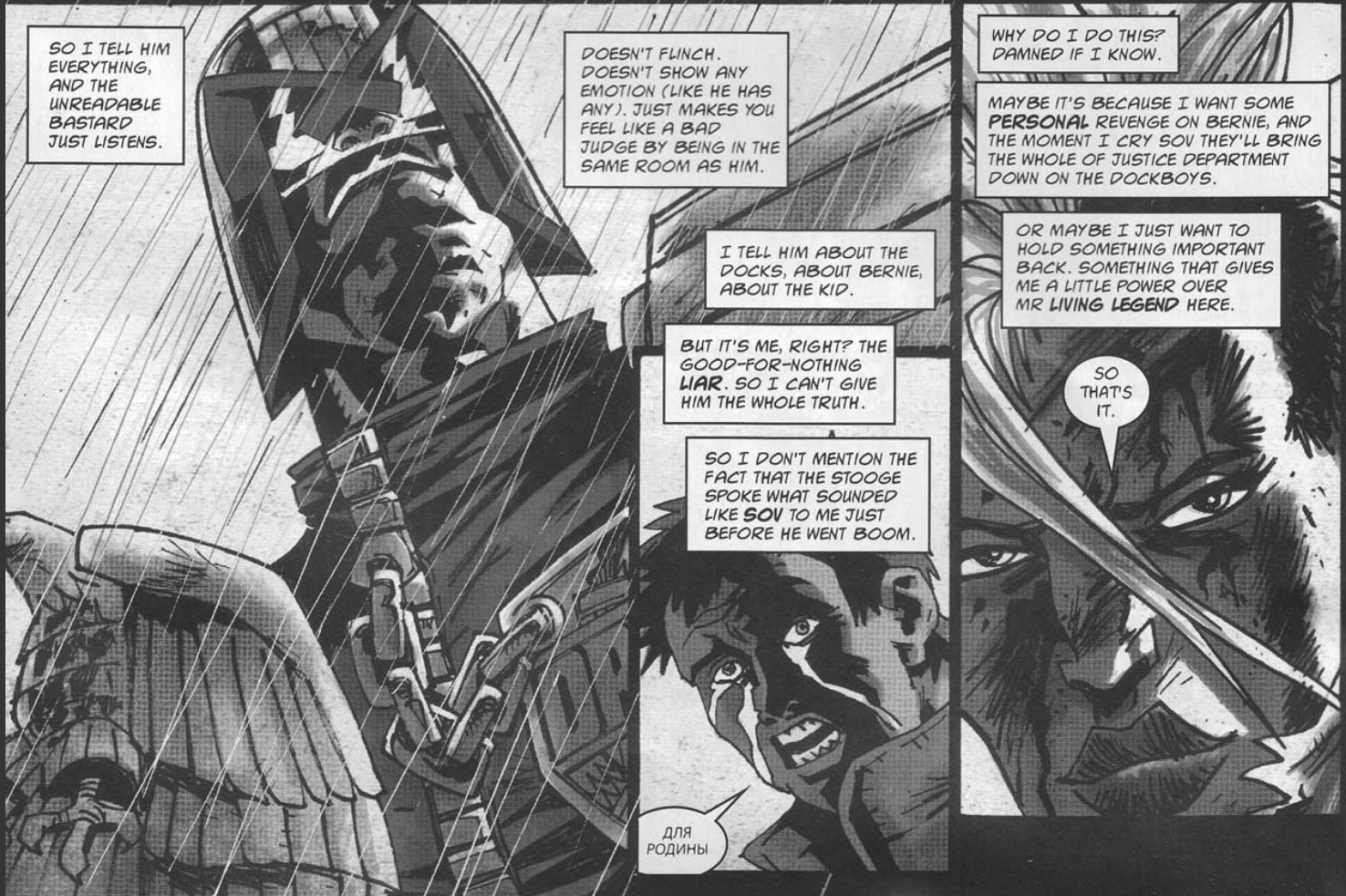 ﻿ Mr Living Legend? Meet Good-For-Nothing-Liar...
Disillusioned with the Justice Department, Aimee switched sides, covertly controlling the criminal underworld of the Low Life under the guise of 'The Big Man.' Eventually, she sold out to the yakuza who were trying to get a foothold in the Big Meg. Aimee betrayed her Wally Squad family having each one murdered before staging her abduction by Yakuza droids.
Dirty Frank, believing Nixon had been kidnapped, travelled to Hondo to get his friend back. Learning the awful truth about Aimee, Frank arrests her and brings her back to Megacity-One to be punished.
Initially, Nixon escaped being sentenced to the penal colony of Titan by cooperating with the Justice Department and spilling the beans on the Yakuza. Unfortunately, dwindling cube space and resources as a result of the Chaos Day bug saw Aimee shipped off to the inhospitable moon where she was surgically altered to survive the harsh conditions...
Gerhart...      ﻿

Gerhart Bugger
﻿
SJS Judge Gerhart was introduced in the 'Innocent' storyline. In the tale, a cocky Tek Judge called Wilson creates a drug which renders the citizenry unable to commit crime and wishes to test it in the aftermath of Chaos Day. Despite Dredd's furious and very vocal reservations, the drug is trialled on three city blocks for a short period. However, as the trial is underway, Wilson is brutally murdered. With the populace unable to commit any kind of crime, it is reasoned that the killer must be one of the eight judges who making up the Justice Department control team, of which Dredd is a part.

SJS Judge Gerhart is assigned to question the suspects. Gerhart's line of questioning is extremely harsh and provocative. He knows just the right buttons to push, blaming Dredd's actions during the Apocalypse War for the high death toll of Chaos Day. 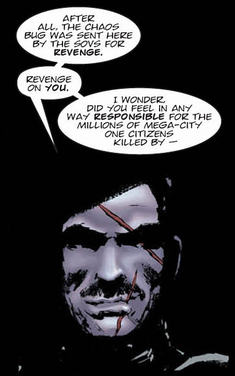 ﻿Hmmm, I wonder how the annoying prick got those scars?﻿

Despite himself, this gets a rise out of an already furious Dredd, but he ultimately satisfies Gerhart that he is not the killer.

The pair next meet in the 'Skulls' storyline, as a battered Dredd is out gunned and pinned down by a gang of Judge Killers called the Bug Boyz. With the shortage of street judges still a problem, Hershey orders the SJS to take to the streets to swell the ranks. It is no coincidence that Gerhart chooses to monitor Dredd, who may or may not be showing signs of excessive anger following Chaos Day.

As the pair storm the Bug Boyz' position, a missile is fired directly at Dredd. Gerhart shields Dredd from the blast, taking the brunt of the explosion himself causing incredible damage to himself. However, this is no great act of heroism from the SJS judge, he still holds Dredd responsible for 'killing' the Justice Department and fully intends to make him pay... 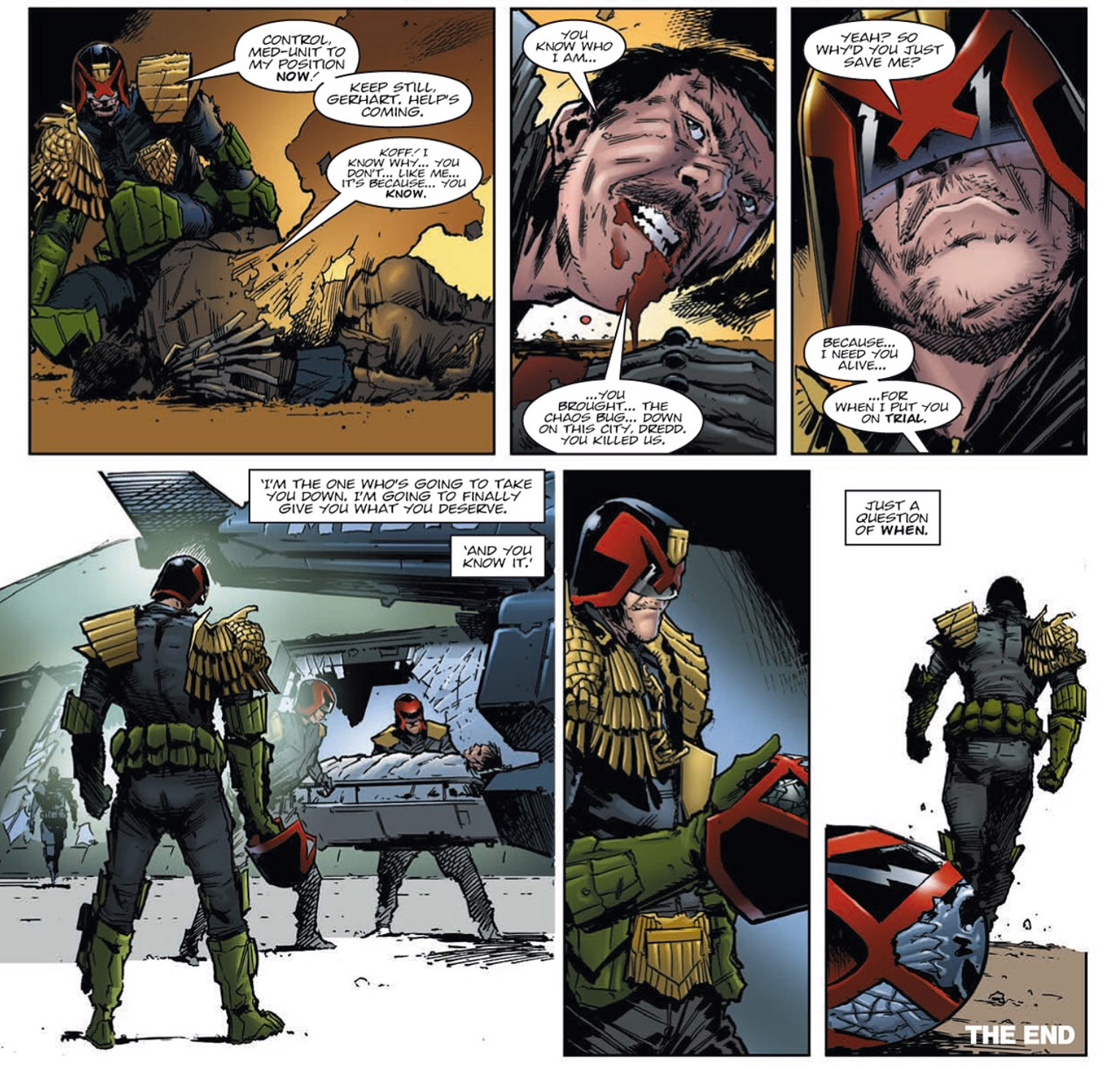 How to win friends and influence people...
﻿
Titan...

When all contact is lost from the penal colony of Titan, Dredd leads a squad of marines into deep space to find out why. Accompanying him on the mission is disgraced ex-warden McIntosh and, you guessed it, SJS Judge Gerhart. 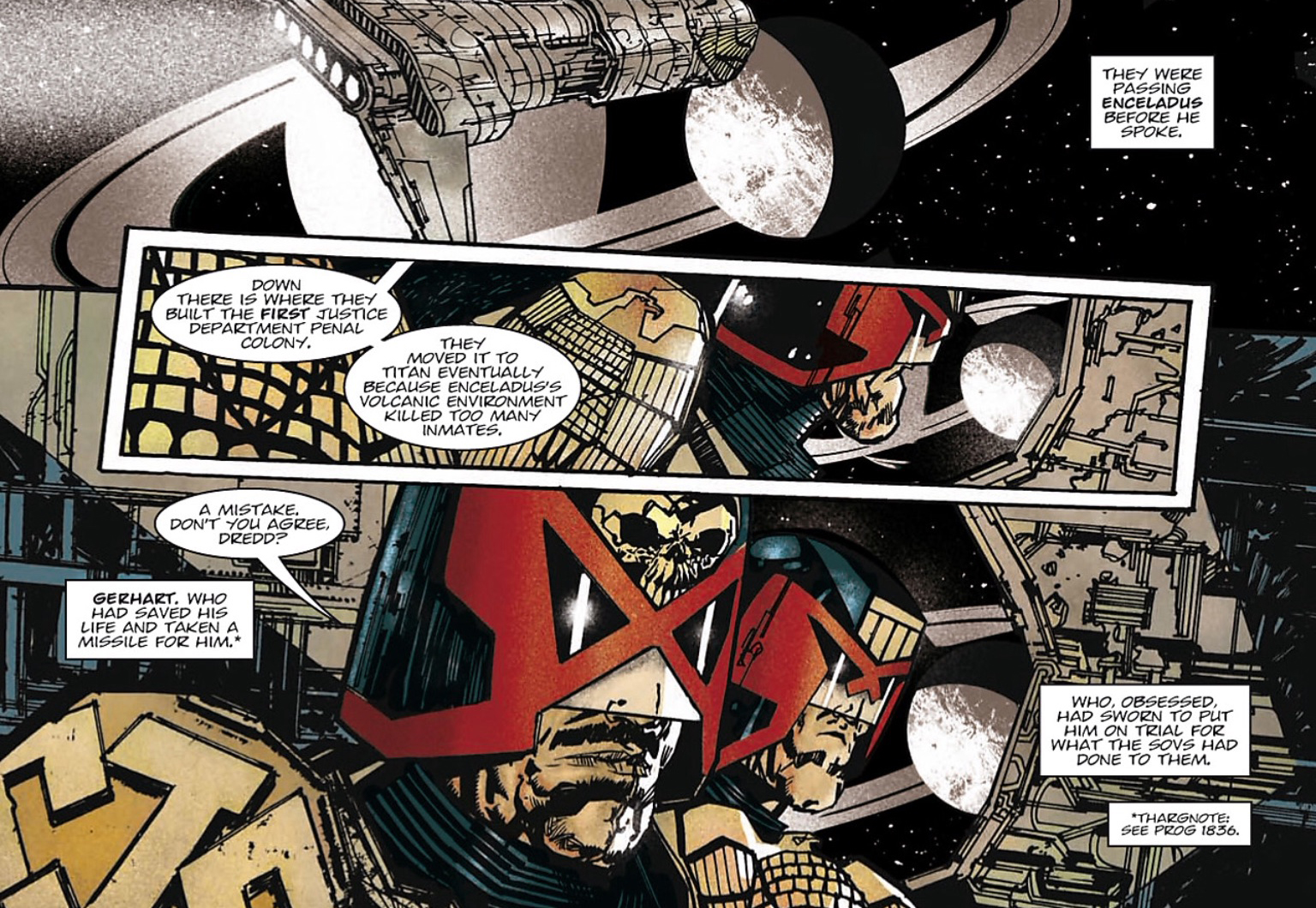 Surely no one would be crackers enough to go back to Enceladus! Oh...
﻿
As the squad freefall into the atmosphere of Titan, Dredd collides with a floating corpse and blacks out. As he begins to burn up, he is saved by both Gerhart and McIntosh. Once on the surface of the moon, Dredd's squad rig the prison's escape craft with explosives before attempting to enter the facility. Sadly, they cannot bypass the prison's impenetrable security systems.

McIntosh leads the group through the mining system beneath the penitentiary to an alternative entrance. As they negotiate the miles of tunnels, they pass a number of failsafe explosive caches buried deep beneath the prison to be used in case of emergency. On reaching the secret entrance, the traitorous McIntosh cuffs Dredd to a pipe and floods the mines, washing the Marines and Gerhart away...

A battered and bruised Judge Dredd comes to in an open prison cell, with a gun just out of reach. Aimee Nixon watches over him, goading him as he fights four embittered inmates who stand between him and the weapon. She reveals that she has been repeatedly drugging Dredd with the same memory wipe drug they cruelly give new inmates following the brutal respiratory operation they receive on arrival. Dredd has been fighting for hours and hours, and is not in good shape...

Back in the mines, Nixon's men find the only two survivors of the flood, Gerhart and Marine Sergeant Austin. Gerhart overpowers the inmates but is badly shot up in the process, showing the extent of his reconstructive surgery following his encounter with the Bug Boyz. After overpowering Aimee's henchmen, a badly injured Austin goes in search of the explosives cache, intending to bring the entire prison down and putting an end to the mutiny. Meanwhile, Gerhart goes after Dredd.

It's just a flesh wound!
﻿
While Nixon continues to break Dredd, disgraced former Chief Judge Sinfield attempts to negotiate a treaty with Hershey. The inmates demands are that Titan is recognised as an independent colony outside of  Justice Department jurisdiction. Hershey steadfastly refuses so Sinfield suggests they relocate to the moon of Enceladus instead, allowing the Justice Dept. to save face. The debate is soon moot as Sgt. Austin blows the charges beneath the prison, causing chaos and catastrophic structural damage to the prison.

As the inmates flee to the booby trapped prison ships, Gerhart searches for Dredd amidst the crumbling ruins of Titan. Suddenly, the ground gives way and Gerhart falls, but is saved by a weakened Dredd. As the two judges escape the colony, Joe reveals that Nixon gave him the remote detonator that will blow the ships, killing herself and the escaping convicts.

Dredd and Gerhart arrive in time to see the ships take off. As Dredd's finger hovers over the detonator, Gerhart reasons that by giving Dredd the detonator, Nixon is trying to make break him by making him a murderer. The physical and mental torturing was a means of weakening the judge before giving him the means to kill prisoners who were not part of the uprising. Aimee knows that if Dredd presses the button, he will condemn himself, and she would be responsible for that.

Dredd does the right thing and let's the ships go. Nixon has lost, she did not break Judge Dredd. The story ends with the inmates arriving on Enceladus, ready to make it their new home...

In the story 'Fit' (read the script here, it's brilliant,) Gerhart continues to monitor Dredd, noting the effects of the Titan mission on his already explosive temperament. Hershey has a tense meeting with the SJS judge, asserting her unwavering loyalty to the city's premier Law Man, while admitting the slightest element of doubt. While it seems that Gerhart has a new found respect for Dredd, it would appear that he is still very much on the law man's case... 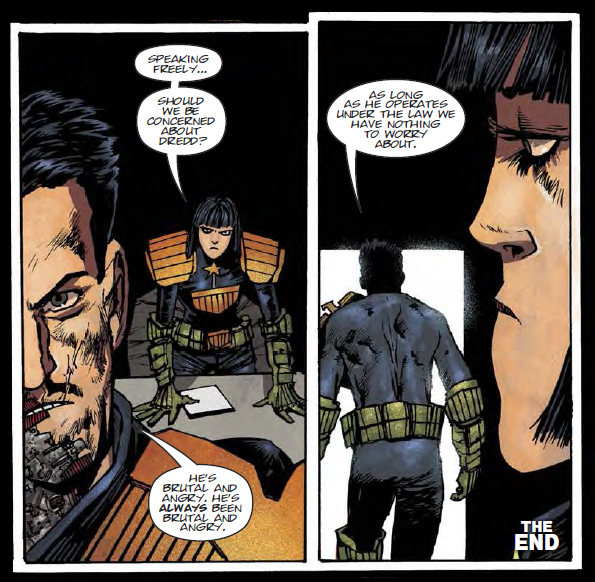