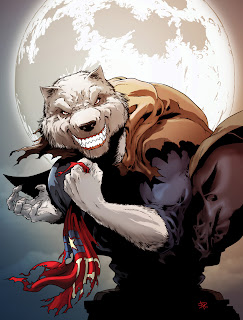 Rejoice Earthlets for Alec Worley and Jon Davis-Hunt's excellent Werewolf series Age of the Wolf returns in Prog 1840! This series, chillingly titled Wolfworld, marks the final book of the trilogy and is set 35 years after the initial werewolf apocalypse.

The trilogy has followed the amazing metamorphosis of heroine Rowan Morrigan. We've seen her develop from a feisty young woman caught up in a Lycanthrope flavoured Armageddon to a grizzled, kick ass Rune Witch who is humankind's last hope. How will the final book end for Rowan and what sacrifices will she have to make?

Jon has produced this typically brilliant cover, showing Sigrid, the villain of the piece, clutching the tattered hoodie of the legendary Rowan. He says "This was the initial rough that I sent to Tharg. He suggested a cover that focused on Sigrid, the main antagonist for the series rather than Rowan. As this is the final Age of the Wolf book, I wanted to still link it into the previous stories, so suggested I have Sigrid, hunched over with the tattered remains of Rowan's signature red 'I am Legend' hoodie..." 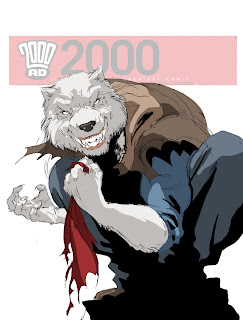 Grrrr, one of Sigrid's red socks had found its way into the white washing...

Jon continues "With the sketch approved I went straight onto inks. I was really happy with the pose in the sketch so I didn't really make too many amends at this stage - just kept to the confines of the pencils, although I did include a lot more detail around the folds and creases of Sigrid's clothing." 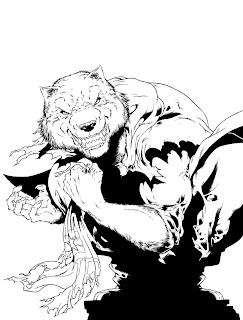 Time to add some colour, "Flat colour went on next, just using the swatch I had already used for Sigrid within the series..." 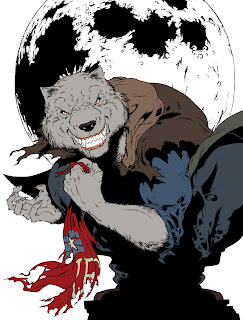 Next we begin to see some of the old Davis-Hunt digital magic. "Then it was time to add shadows and highlights. I decided while I was doing the inks that I would add a moon to the top third of the background that would provide a strong light source - illuminating Sigrid from above. I made some liberal artistic allowances with this. Really, Sigrid should be far more in shadow, but I still wanted certain elements to stand out from the shadows I had already decided upon with the inks - so I didn't bother with the deep shadows that would really appear around her arms and lower jaw..." 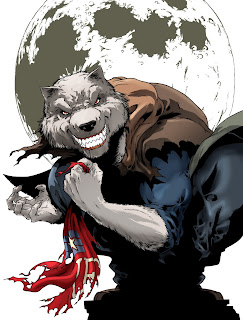 Yikes! Now this cover is getting really scary!

"Finally I added a series of washes and effects to provide a real glow to the moon and then bring all the colours of the image together. I also warmed up the image with some orange and red hues, just to add a bit more visual interest and so the red of Rowan's hoodie didn't unbalance the composition. And that was that!"


And here's how the cover looked on your local cyber shelves, nice that the logo was red to match the hoodie... 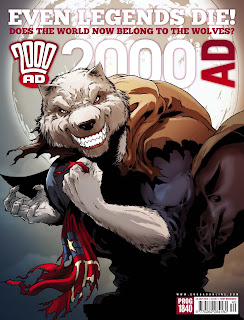 A HUUUUUUGE thank you to Jon for sending the images and text, he's been a wonderful supporter of this blog since the start. Please check out his brand new website right here! While I'm on, Alec Worley's website is similarly ace, giving some great insight into how he works.
Posted by Pete Wells at 15:55