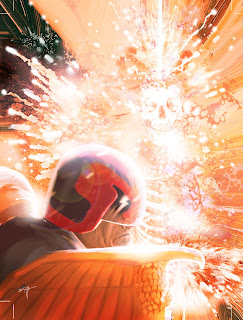 BOOOOM!!! What an explosive cover from fan favourite Artdroid Dave Taylor! Dave has made a triumphant return to the prog after spending some time working for 'Big 1 Comics' over in Megacity One. The artist has been scrambling our circuits with his awe inspiringly intricate work on the current Dredd thriller Wastelands which also sees the return of John Wagner.
Over to Dave to tell us how the piece came together...
"Tharg wanted this panel from the last episode as the cover, it being the most dynamic scene, so I wanted it to not just ape the image but to add something. Something more graphic by design."
Here is the panel in question... 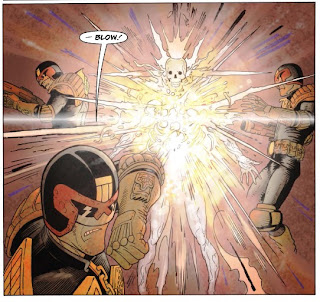 Boomshanka!
"My first thought was to leave his arm out of the shot but I had a go at fitting it in for the hell of it...I decided I was right, it was in the way."﻿
﻿ 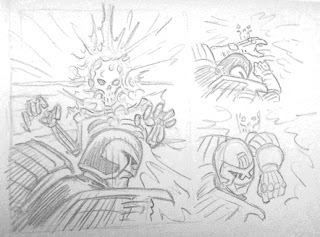 
"I then did this very fast colour sketch in photoshop for Tharg, thinking at this stage that I wanted an unusual colour scheme, not the obvious red/orange/yellow hot/fire/baddaboom colours. Tharg wanted more of Dredd's handsome features visible but was happy for me to go ahead with this concept." 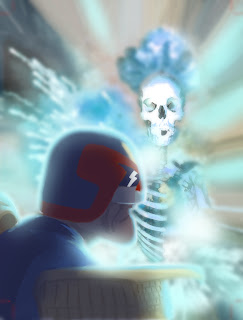 Mrs Gunderson showed Dredd her new Blue Rinse...
"As I'd eaten most of my cover deadline up finishing the last episode I now only had a few days to get this finished, so I took some short cuts. I took photos of my skeleton...I mean, not MY skeleton, my other one, the one I rescued from the medical school in Edinburgh many years ago and who now rests in relative peace in my studio. I actually did this for the colour sketch (last image) along with taking photos from youtube of explosions (copyright free obviously!), which I then manipulated and painted over in PS. Here you can see the finished skeleton, with lovely new teeth, painted in." 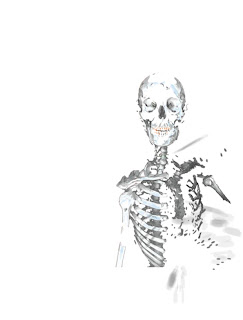 I bet he uses Colgate.
"I then messed about with the explosion photos I'd taken and finished the background. Warm colours creeping in." 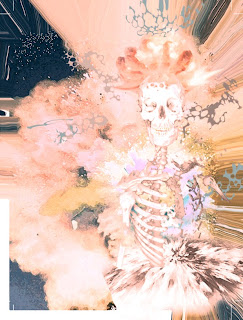 "The under painting of Dredd. Have I mentioned how much I love PS!?! I'd love to have the time to paint with real paints on real canvas but it's just not to be, so being able to bang colour down quickly is a dream." 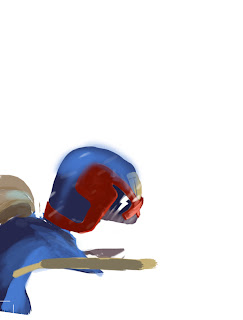 Judge Griffin
"Dredd's face and eagle added, again, as fast as I can, keeping as much energy as possible. I knew as I got closer to the end that it would build up dynamism and depth, something the first colour sketch seriously lacked." 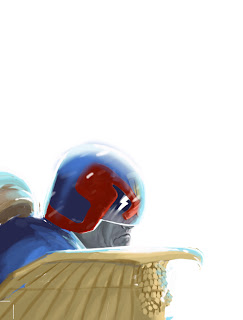 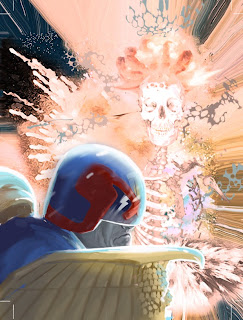 I can totally hear Tchaikovsky's 1812 Overture when I look at this cover!
"Added detail and fx." 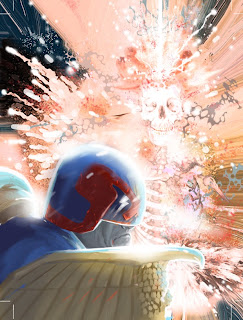 Judge Fartypants let one go next to the Stumm Gas canisters again.


"Almost....there...almost...there. Not happy at all with the colour I knew I could simply add an overlay of my beloved orange and all would be fine." 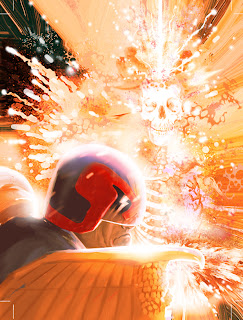 "Just a few tweaks and nudges and a little lighting fx...and we're done. On time too! It should go without saying really, but it's always a literal thrill to do a cover for 2000AD, this being my fourth. I wanted to have this tie in somehow with Chris' awesome first episode cover, book ends if you will, so the orange I used is as close as I could get to the one he used."

Disclaimer: The contents of this image may be hot
And here's that bookend by Chris. I've got to say, the two images compliment eachother nicely!﻿ 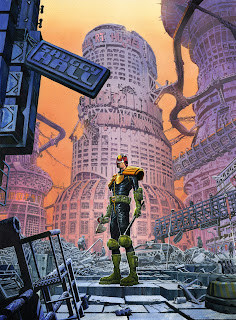 Finally, here's the cover as it appears on your local Thrillmerchant's shelf; now there's an eye popper if ever there was one! 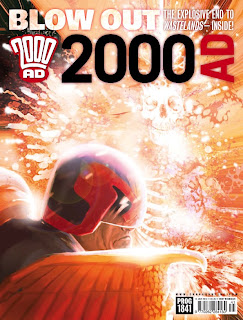 I'm a massive fan of Dave's work, his city blocks and robots are phenomenal so naturally he was one of my first choices for a commission. The brief was Dredd battling an enemy of Dave's choice (though I strongly hinted for Call Me Kenneth) at Pete Wells Block. What I got was Dredd up to his knees in deranged droids - classic! 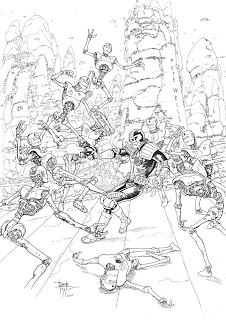 Another frigging riot at Pete Wells Block!?!
Thank you so much to Dave for taking time to send us all of these fantastic images and the fascinating commentary. Let's hope he's back in the prog soon! While we wait, here's a link to his blog, go on, spoil yourselves!﻿
Posted by Pete Wells at 16:16