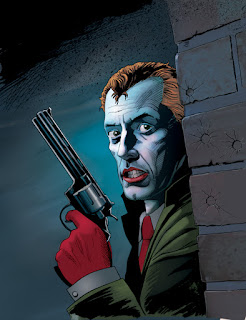 John Charles returns to the cover of the prog this week with this tense image of Finigan Sinister as he faces Melcze... erm, Melchervi... try again, Merchevich.... erm, as he scopes his prey, okay!?!

This isn't John's first cover featuring the wise cracking gun shark, he was also the star of John's first ever Prog cover almost fifteen years ago! 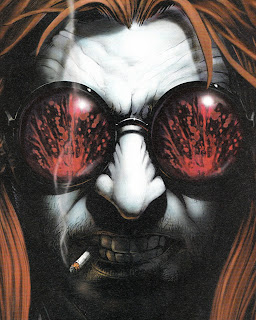 Ye've got red on ye!

Over to John to tell us about his reunion with a gun shark...

"The Brief, from Tharg the Mighty: “I was thinking of a side-on, upper-body shot of Sinister, back against a wall, looking desperate, his gun held before him, maybe gunshots peppering the wall. Lots of tension and drama.”

"I start doodling and come up with several very rough, roughs. I then get my wife to photograph me in various relevant poses, so that I can garner clothing detail, etc. I do some more rough drawings and scan these in and arrange them with the 2000AD cover template, so that I can see how they'll work with the logo, etc."

"At this point, I'm falling in love with details like the folds in sleeves, and perhaps missing the point. Thankfully, something tells me to go back to my original sketch roughs and add a final one: E, which oddly enough was my first response to the brief. I'm probably favouring other roughs, but Tharg says E is the one, and he's the man, (well alien - Pete) so we go with E."

"I'm up in Leicester that weekend and I get my mate Mark to pose for the shot for me. Mark's a top-class graphic designer, and when I show him the roughs he plumps for E too. Who knew my best mate was from somewhere near Betelgeuse?" 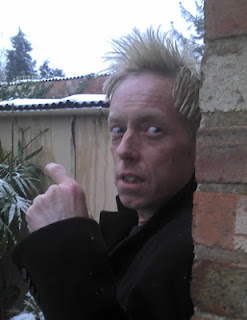 "Then it's pencils, and inks in the time-honoured manner. For some reason I want to keep in the cross hatching flavour for this one, although if you ask me I think cross hatching is illogical, as it doesn't exist in real life. But something tells me to go with it this time." Hmmmmm, try looking at Cliff Richard's neck or Keith Richards' face and tell me cross hatching doesn't exist - Pete. 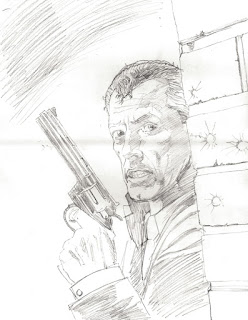 All in all it's just another Mick in the wall...
(Apologies to Irish people/Pink Floyd fans everywhere.) 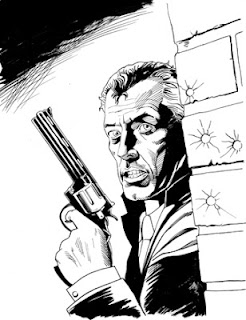 Finny is still playing hide and seek with Ramone

"Looking at the inks now, part of me thinks I should've just worked over the pencils, but, hey-ho. Then it's into Photoshop for colouring: a flats layer, several shadow and highlights layers, and thankfully it all comes together. I send it into Tharg, and wait for it to come out..."

"And now it has, hurray! I'll be honest with you, I'd have put the wall behind the 2000AD logo, but I can see why it makes sense to pull the wall forward. I think it works though, and I hope it sells well for Tharg, and that the 2000AD readership like it."

I'm sure they do John! Here's the final cover with the logo, I have to say I'm a fan of the logo hiding behind the wall with Sinister. 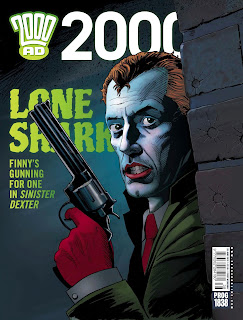 Massive thanks to John for sending the images and commentary, and to his mate Mark! Check out John's deviant art gallery here, let's hope to see more 2000AD stuff in there soon!
Posted by Pete Wells at 23:43