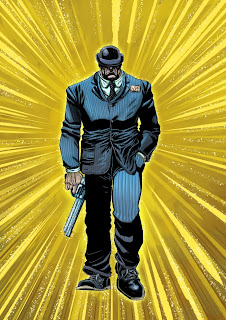 This week saw the Titan release of Si Spurrier and PJ Holden's magnificent Number Cruncher. This brilliant, brain-bogglingly clever story first appeared in the creator owned slot of the Meg and was so good it made the Megacast's Iz and Whittle's knickers melt! The Titan version has been expanded and coloured, so fans of the strip should definitely track this down.

The comic focuses on dead thug Bastard Zane, top enforcer for 'The Divine Calculator', the omnipotent accountant who keeps the universe checked and balanced. It's Zane's job to speed people into the afterlife, something he was born, or at least killed, to do.

When mathematician Richard Thyme dies, he crafts a deal with The Divine Calculator to be reincarnated to see his true love. What follows is a chaotic cat and mouse game of plots and counter plots between two brilliant minds, with poor Zane caught in the middle.

"Numbercruncher snuck up on me. I'm more used to how 2000AD's deadlines works, and while 99% of the art for numbercruncher was completed long ago for the meg, what we didn't have were covers. "

"So the deadline for the first cover came at me out of nowhere."

'In a blind panic I sent off the original Numbercruncher Meg cover (read all out it HERE - Pete) as a holding image - Titan wanted to be able to launch the book at San Diego and were looking for the cover in November! A recoloured version of the original cover would end up being used as the cover for issue 2 which I photographed and sent off - I can't remember now, but I think my internet was on the blink, so I could only send email via my phone - luckily it has a camera…' 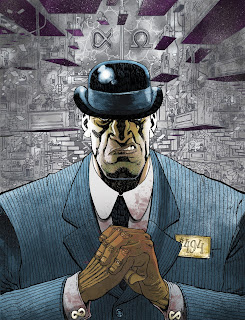 'At this point, there was an idea of using some sort of fancy pants/clever/clever two tone cover thing - splitting the cover into the real world and some sort of abstract "time travel" diagram (very cleverly setting out the story in a subtle way people wouldn't notice until they'd read the whole thing).'

'Time being what it was, that idea was shelved.' 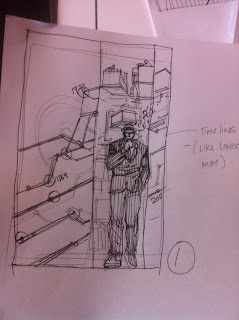 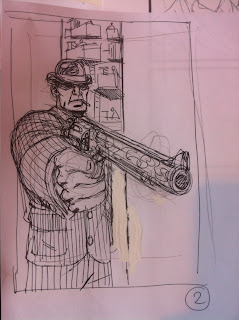 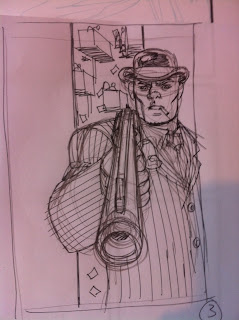 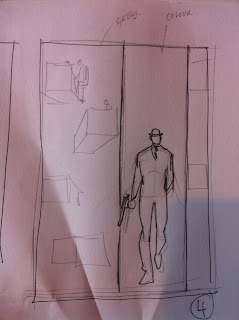 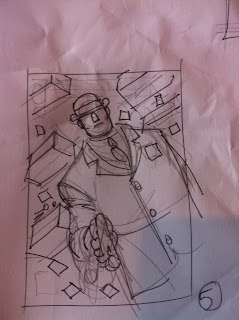 "I can't find the pencil sketch now, sadly, but in order to give Steve White (my editor at Titan) something to look at, I quickly pencilled, inked and coloured a standalone figure of Bastard Zane. It was pencilled traditionally but inked in a really early version of Manga Studio 5 (which Smith Micro were kind enough to send me as an early adopter). Numbercruncher - which features some of the most traditional grey washed art I've ever done, was going to be my stepping stone to all digital art." 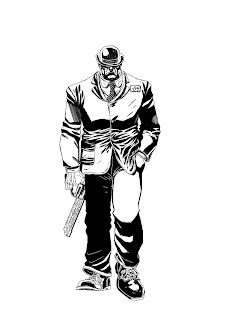 'I coloured him up and sent him on. Have to say, I was pretty pleased with how the big fella looked…' 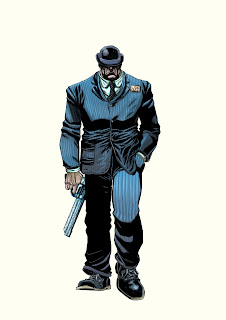 'That sent, I got on with some other stuff, oddly both Titan and I knocked up a final image idea with a lot of yellow in it.'

'At this point, I had something they could use as a final cover, but I felt like I needed to add more to it (and, by more, what I actually did, was took away from the straight forward impact).'

'Luckily, the final cover I sent Titan, they rather ignored, and brought it back closer to the original simpler image. ' 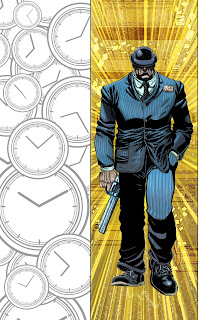 'In hindsight, titan's decision to lose the clocks and expand the yellow into the whole background really is a good one. The clock cover above already looks a little dated (to about 1986.)'

'And the final cover.' 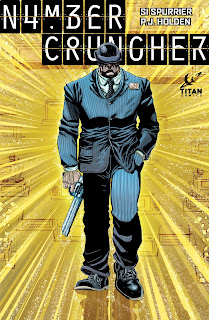 'Oh, for issue 1 I was asked to do an alternative cover. Time was pressing even worse for this than the previous #1 cover, so to be honest, I'm far less happy with it. BUT, here it is anyways...' 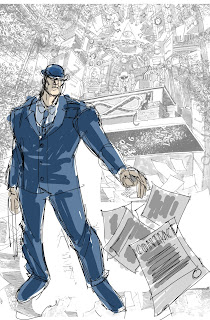 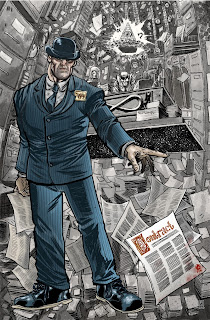 Wonderful! It's great to see Numbercruncher find a bigger audience, it really is a fantastic story and PJ's art blows me away every time!

As Paul said, it's available now and I can't recommend it highly enough!
Posted by Pete Wells at 02:32