Simon Davis - Who's your Grandpere? 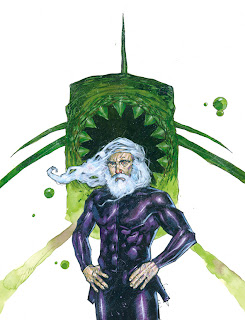 Above is a great cover featuring Grandpere, the fearsome leader of the doomed foreign legion squad from Al Ewing's Damnation Station story. The cover is yet another painted masterpiece by award winning portrait painter, Mr Simon Davis.

Below is his other Damnation Station cover featuring the initial cast of the space epic. 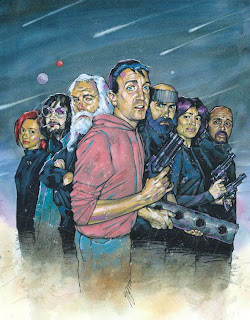 Simon is a self confessed luddite who doesn't own a scanner and prefers to hand deliver his artwork to Tharg's Command Module, hence no work in progress scans or sketches for the blog unfortunately. However, I can point you in the direction of his glorious Ampney Crucis covers, a wonderful collection of his Sinister Dexter covers and some outstanding white space covers here.

I've also printed a random selection of his covers below kicking off with the cover of the 2000AD Brit Cit Special that was Prog 1293 and the cover of Classic Judge Dredd number 6, showing Simon's depiction of the classic ale 'The Big Sleep' by TB Grover and Cam Kennedy. 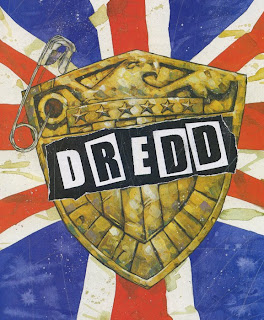 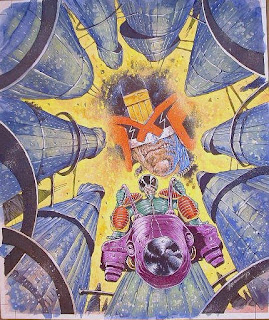 A couple more Dredds, firstly the cover of Prog 1069 for the Story 'Little Bo Peeper' by John Wagner and Cliff Robinson and then Prog 1038 from the story 'Fog on the Eerie' which saw Dredd and a bunch of cadets go back in time to hours before Big Bad Bob Booth intitated the atom wars that led to the creation of the justice system... 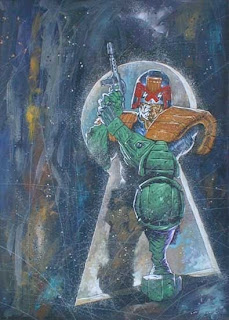 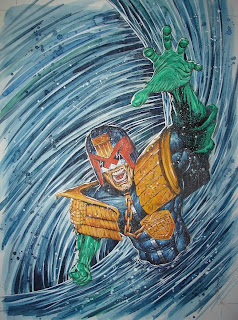 I've included the printed cover so you can see the erm... realistic gaussian blur that was added to the water in the whirlpool, ugh! 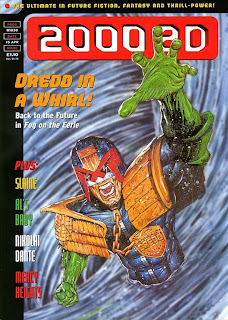 Simon has painted well over 80 covers for the House of Tharg featuring pretty much every major character or series. He's worked on dozens of strips and has a knack for taking other artist's characters and making them his own, for example, in many readers' eyes, Si is the definitive artist for Sinister Dexter and Missionary Man.

Below we see a bunch of geeks from Si Spurrier's Beck and Kawl series from 1329, a wonderfully creepy cover for the nasty Stone Island from Prog 1502 and Hannah Chapter fighting a Golem from the much missed Caballistics Inc. by the much missed Gordon Rennie... 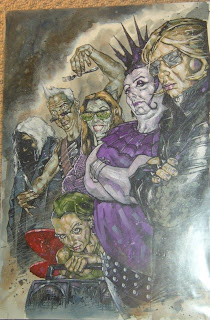 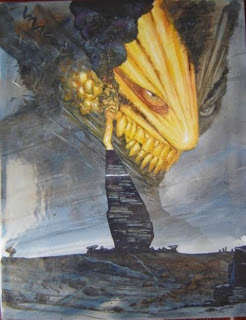 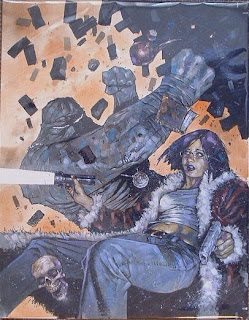 A strange one next, a spread from the Judge Dredd Mega Special from 1994. Readers were asked to vote on which series they'd like to see back in the Megazine. From left to right there's: Judge Karen, the Undertaker (from Missionary Man), Pandora (drawn by the late John Hicklenton), Sumos and Sporrans, Dredd - Sinned-In City and the superb Wetworks. 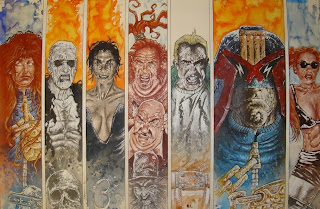 Aaaaand finally, a crowning moment in 2000AD's history. After our glorious alien editor was ousted by the odious Men In Black, Tharg made is triumphant return on the cover of Prog 1032 and squax everywhere rejoiced! 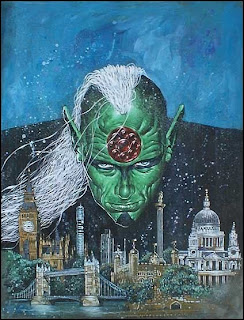 I'm a big fan of Davis' work and think he's definately one of 2000AD's treasures. It says a lot about the comic that such an accomplished and respected artist is still so active in the galaxy's greatest and long may he continue...
Posted by Pete Wells at 23:15