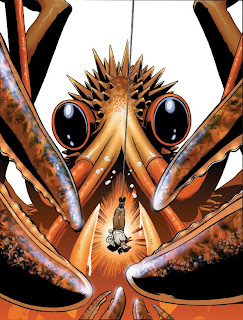 Poor Jack Dancer, he's been dangling in front of that giant lobster since Prog 1623, that's forty five weeks ago now! This is, of course, another brilliant Red Seas cover by the series' celebrated artsit Steve Yeowell.
Steve's delicate penmanship was first seen in 2000AD way back in Prog 535, on a little known strip called Zenith. Grant Morrison, the writer of Zenith, had worked with Yeowell on Marvel's Zoids comics and invited him to be the artist on his story of the egotistical British superhero. It's worth noting that only three progs after his momentous start on Zenith, Yeowell also provides the art for a Future Shock written by Neil Gaiman! Not a bad introduction, eh?

Steve has worked on a large number of strips for 2000AD, including big hitters such as Judge Dredd, Sinister Dexter and Nikolai Dante as well as being the main or sole artist for several titles such as the afore mentioned Zenith, Detinator X, Manic 5, Pussyfoot 5, A Life Less Ordinary, Devlin Waugh: Chasing Herod and most recently, the Red Seas.

The Red Seas is a swashbuckling adventure which mainly follows the adventures of 18th century pirate, Jack Dancer and his crew. First published in Prog 1313, many readers, myself included, assumed that Tharg was jumping on the forthcoming Pirates of the Caribbean bandwagon. Naturally the mighty one soon proved us wrong as the tale quickly developed into a complex, dimension spanning, time travelling epic featuring themes and characters from writer Ian Edginton's vast universe and beyond.
Below we have the rough for this weeks cover followed by the half size print rough, check out the faultless composition, wow... 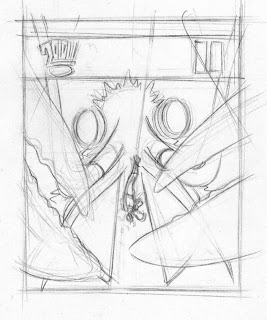 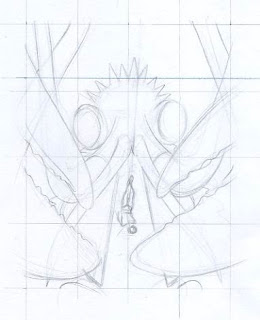 Next we have the pencils and those wonderful inks. I don't know about you but this cover freaks me out a little, crustaceans always look so dangerous, ugh! 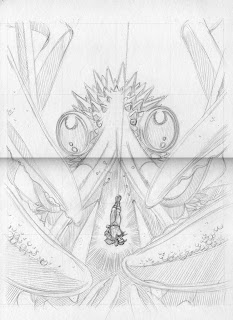 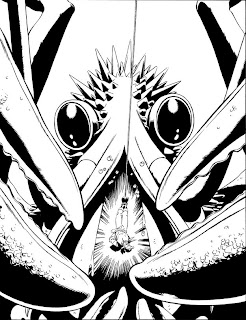 And finally the coloured version (colours by Chris Blythe...)

Fantastic! So, lets have a look at some of Steve's wonderful Red Seas covers from Progs gone by and a brief, somewhat muddled recap of this complex story to date! Allow me to introduce the fearsome villain of the first Red Seas story, Doctor Orlando Ignatious Maximillian Herodetous Doyle (who also featured in England's Glory, the second book of Stickleback...) 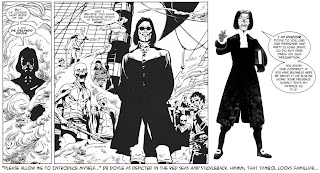 Doyle was an evil necromancer, captain of 'The Black Galleon' and leader of an undead horde who planned to destroy the world using information stored in 'The Albrecht Tome', a lost chapter of a powerful religious book which had been unwittingly stolen by Jack and his crew. With a little help from Satan himself, Doyle undergoes a fearful transformation as shown on this great cover for Prog 1321... 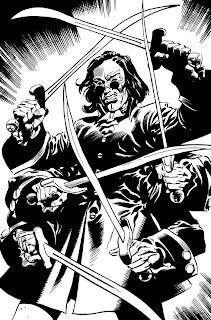 And here are the dazzling colours by consistently excellent colourist Chris Blythe... 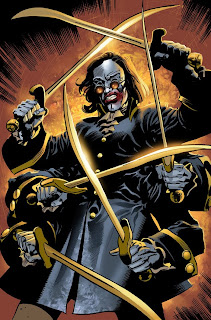 Doyle is thwarted by Satan who plans to use the Albrecht Tome himself to unmake creation, thankfully the devil himself is defeated by Dancer and his sorceress lover Isabella. Something which may well come back to haunt him...

The next two images feature the cover for 1460, boasting what I feel is the definitive Red Sea's cover - a cocky looking Jack quite literally up to his neck in trouble. This was the opening episode of "Underworld", a romp where Jack, accompanied by his crew and his half brother Alexander, journey beneath the Earth to find their missing father on the orders of Sir Isaac Newton. 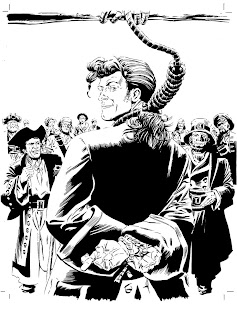 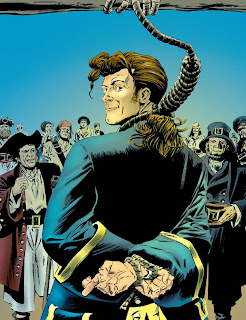 Onto Prog 1602, the the first of two covers for the "Old Gods" story which saw Jack and his faithful crew in the service of George Washington to stop a horde of undead Vikings murdering civilians in America... 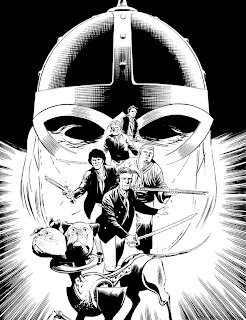 This led Jack to an hilarious meeting with some cantankerous old Norse gods and the acquisition of a host of mythical weapons powerful enough to stop the zombie Vikings and recurring bad guy Professor Toten. In the cover below (Prog 1609) we see Jack with the fabled Lightning Bow, given to him by the Demi-God Storr. By the end of this adventure, Jack and his crew decide that they will no longer run from their fate, choosing to face whatever dangers come their way head on... 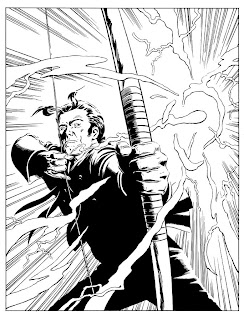 Indeed danger soon finds Jack as he is summoned by a tempest to the Isle of Lost Souls by none other than Shakespeare's Prospero, who wishes to emphasise to Dancer his importance in forthcoming events. Prospero warns that Satan, still furious at his defeat by Dancer, has summoned the Cradle of Filth (a vast ark filled with all manner of dark creatures) to destroy Jack and his crew forever. Shortly after hearing this news, Jack and co are captured by Caliban and offered to the giant lobsters seen at the start of this article...

Meanwhile, Sir Isaac Newton calls together a meeting of the twelve members of the all-powerful Brotherhood of the Book - the guardians of the secret magical history of mankind. Made up of many characters from Edgington's universe (including Dr Doyle,) this otherworldly cabal protect their respective realities from all manner of arcane threats. Newton warns the group of Satan's plan to undo creation and remake it in his twisted image but they decide not to get involved. A furious Sir Isaac storms out, leaving the brotherhood forever...

The superb cover below, for Prog 1644, shows the great clock who's bell summons the Brotherhood to order. 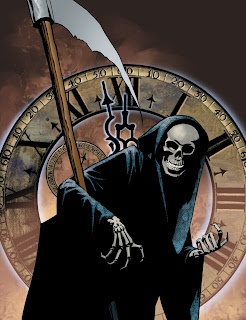 Newton decides to find Jack but is himself kidnapped by the mad Baron of Vulgharia, a robot-making maniac who wishes to discover the secret of Newton's immortality. Sir Isaac discovers that the Baron is working with a resurrected Professor Toten and that there is a traitor within the Brotherhood of the Book. As Toten begins to torture poor Newton, Dancer's beautiful Arabian cousin Captain Sarita, descendant of the great adventurer Sinbad himself, saves the day. She reveals she was also summoned by Prospero and told to rescue Newton and Dancer. 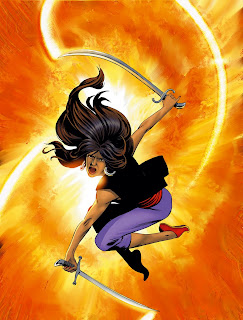 Please note, colours for both the above covers are again by Chris Blythe.

So, that clumsily brings us up to date with the Red Seas and allows me to showcase some of Mr Yeowell's amazing covers. Thanks to Steve for sending them, and particularly for getting in touch with Chris to get the coloured version of this week's cover. I'm sure all who are reading this appreciate it as much as me!