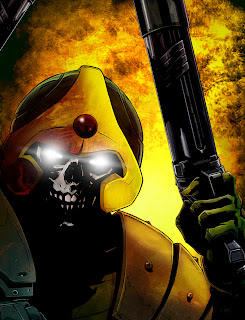 Another winning cover from Ben Willsher, this time for the mouth-watering epic that is ‘The Life and Death of Johnny Alpha.’ As long term readers of 2000AD know, back in 1990, following months of speculation that a major 2000AD character was going to die, Johnny was heroically killed in prog 687.
Johnny was killed in an Alan Grant penned story “The Final Solution” which saw the mutants of the UK offered a life of paradise in another dimension through a portal at Stonehenge. The offer was made by the Evil Lord Sagan, who we find out was the illegitimate son of Nelson Bunker Kreelman, which makes him Johnny’s step brother.
Of course, the paradise the muties were promised was a lie, and they were expelled to a hellish barren dimension dominated by a “big flying monster.” Johnny was thrown through the portal and faced off against the flying beast using powerful alpha rays from his eyes to read the monster’s mind. This came at a terrible price as the beast burned out Johnny’s eyes, blinding him and leaving him in agony.
However, this meeting of minds showed Johnny that the beast was a construct of Ly-ran sorcery and that a blood sacrifice could defeat the beast and open a portal back to earth, allowing the mutants to escape. And so it was that Johnny faced the monster a second time, sacrificing himself so the mutants got home… or did he?
Twenty year later and Strontium Dog creators John Wagner and Carlos Ezquerra are giving us their version of events. Did Johnny die at all? Over the next few weeks we will find out what really happened!
To celebrate the start of the series, we have a terrifying cover by current favourite Ben Willsher who has been kind enough to offer commentary on this and his fantastic Megazine cover.
Below we have the roughs, Ben said “Tharg came up with the concept of a 'dead' Johnny Alpha cover. He wanted a head and shoulders shot of the former Master John Bunker in full Stronty armour, but with a skull lurking beneath the helmet. I did these two VERY rough concept pieces (which were little more than thumbnails) one with glowing eyes, and one with merely hollow sockets. The Mighty One favoured the glowing eyes. 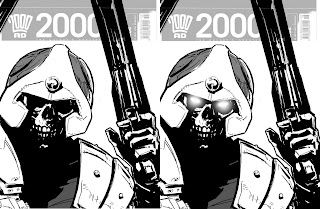 Next the chilling inks, “Normally I do the black and white art in a fairly traditional manner, and pencil it and then ink it fully. However, I wanted to tackle this piece more as a painting; so the inked art was drawn more loosely and I left large blank spaces so that I could use the colour to build up these areas.” 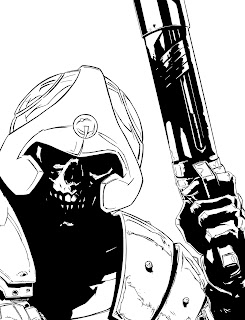 And finally the horrific coloured piece “When I came to colour the piece I released that some of the looser art didn't work, especially around the gun (the trigger being completely out of perspective,) shoulder pad and arms; and these areas needed to be reworked quite heavily. For the finished look I wanted the whole image to have the feel of Hell and atrophy, so instead of solid colour I used a lot of brush work and texting to achieve the finished effect.”

I’m sure you’ll agree the effort was well worth it. Surely this is a contender for cover of the year? For the sake of completeness, below we have Simon Parr’s teaser poster for ‘The Life and Death of Johnny Alpha’ too, cracking stuff! 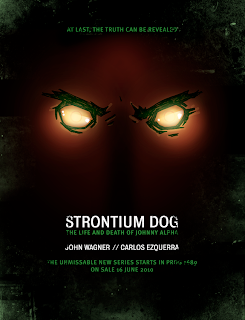 Speaking of cracking, here is Ben’s iconic, hard-hitting cover for Megazine 299. "
Here is the first concept rough that I sent to Matt. As you can see, it has the 2000Ad banner at the top; however, it was always mooted that it might be for the Megazine. So it is merely used as a generic placeholder graphic, as the Meg and Twothou use about the same dimensions.

Also note that this initial concept has a blood smear on the 'camera lens', and not a spurt of blood. I wasn't sure of the 'blood policy' on covers, so it was always made to be an element of the graphic that we could easily lose. Matt in his wisdom suggested its removal, and instead came up with the idea of smashing the 'lens'. A brilliant idea on his part, as I think it now really sells the imagine of Dredd coming at you with some force." 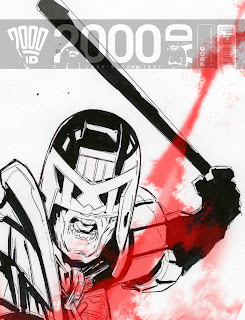 "The next stage is the Black and White art, which then becomes the template for me to start colouring and adding the effects, such as..." 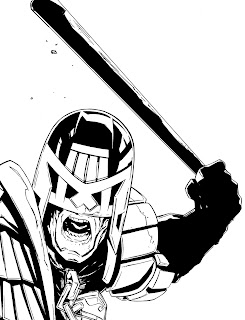 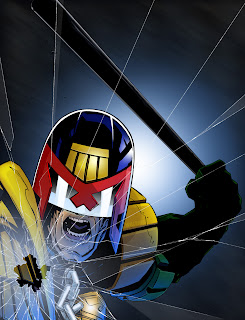 An absolutely superb cover, I'm sure we'll see this image used a lot in the future! Many thanks to Ben for once again taking the time to send his work and give us a fascinating peek into the creative process. Remember to visit his site at http://www.benwillsher.co.uk/index.html.
Posted by Pete Wells at 00:53