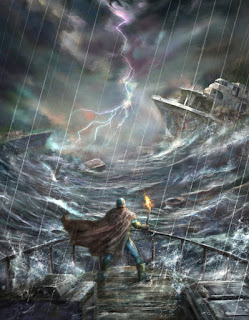 The dream team of Nick Percival and Mike Carroll are back in the Meg which sees (seas?) Dredd and Joyce battle the elements and more in the Pacific swirl of 'The Gyre.' As well as blowing our minds with unforgivingly harsh, visually stunning interiors, Nick has painted two glorious covers for the series. Over to Nick for more:

“I wanted this Dredd adventure to look quite different from any previous Dredd stuff, so really concentrated on visually creating a new mini-world for Dredd and Joyce to be stranded in, all influenced from Mike‘s great script. It’s permanently raining, so I wanted a bit of a hazy look to the art, where outside, not everything is in full-focus, hopefully increasing the atmosphere and mood. I was looking at the movie, ‘Se7en’ quite a bit (one of my favourite films) where it’s constantly raining."

"For the cover to Part 1, I originally had a figure shot of Dredd, pelted by heavy rain which was OK but ultimately decided on a piece with a grander sense of scale having Dredd entering the unknown, perilous waters of the Gyre...” 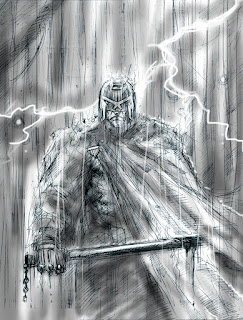 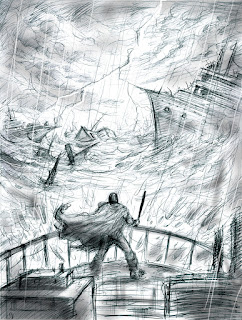 ﻿
Dredd Seas
The design team did an excellent job on this cover, really integrating the text into the image. Extra oil rations to those droids please Tharg!
﻿
﻿ 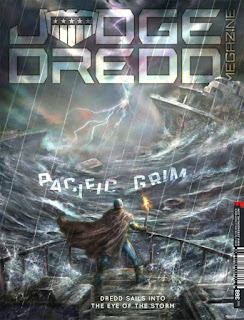 Nick's cover for part three was balls to the wall action, however, the first idea was little more menacing!

“I wanted to do something very different to the cover for Part 1, which was all about setting the mood for story, so Part 3 was always going to be an action cover. Classic Dredd vs the villain type stuff. I actually sent Tharg a different image for Part 3..." 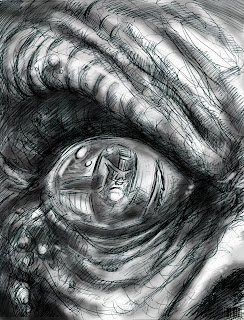 ﻿
"I see you Joe Dredd, I drokkin' see you!"
﻿
"However, I woke up early the following morning with this new image stuck in my head, quickly sketched it out and sent it to Tharg, telling him to ignore the previous version. I had a lot of fun with this one and the whole story for The Gyre. It’s been cool to design and develop a new little world for Dredd to play in and Mike always has such good ideas for settings and characters, that it never gets boring.” 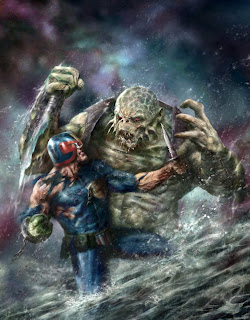 Krait balls of Gyre!﻿
And here's how the finished Meg looks on your shelf, lawsome! 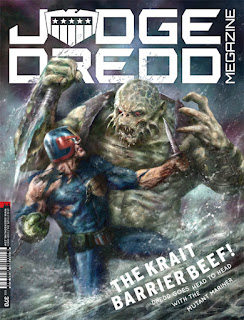 The Krait Skittish Face Off
﻿
HUGE thanks to Nick for sending the images and text. This was a classic series and I'd love to see Dredd return to the Gyre in future. It's too good to waste!
Posted by Pete Wells at 03:53