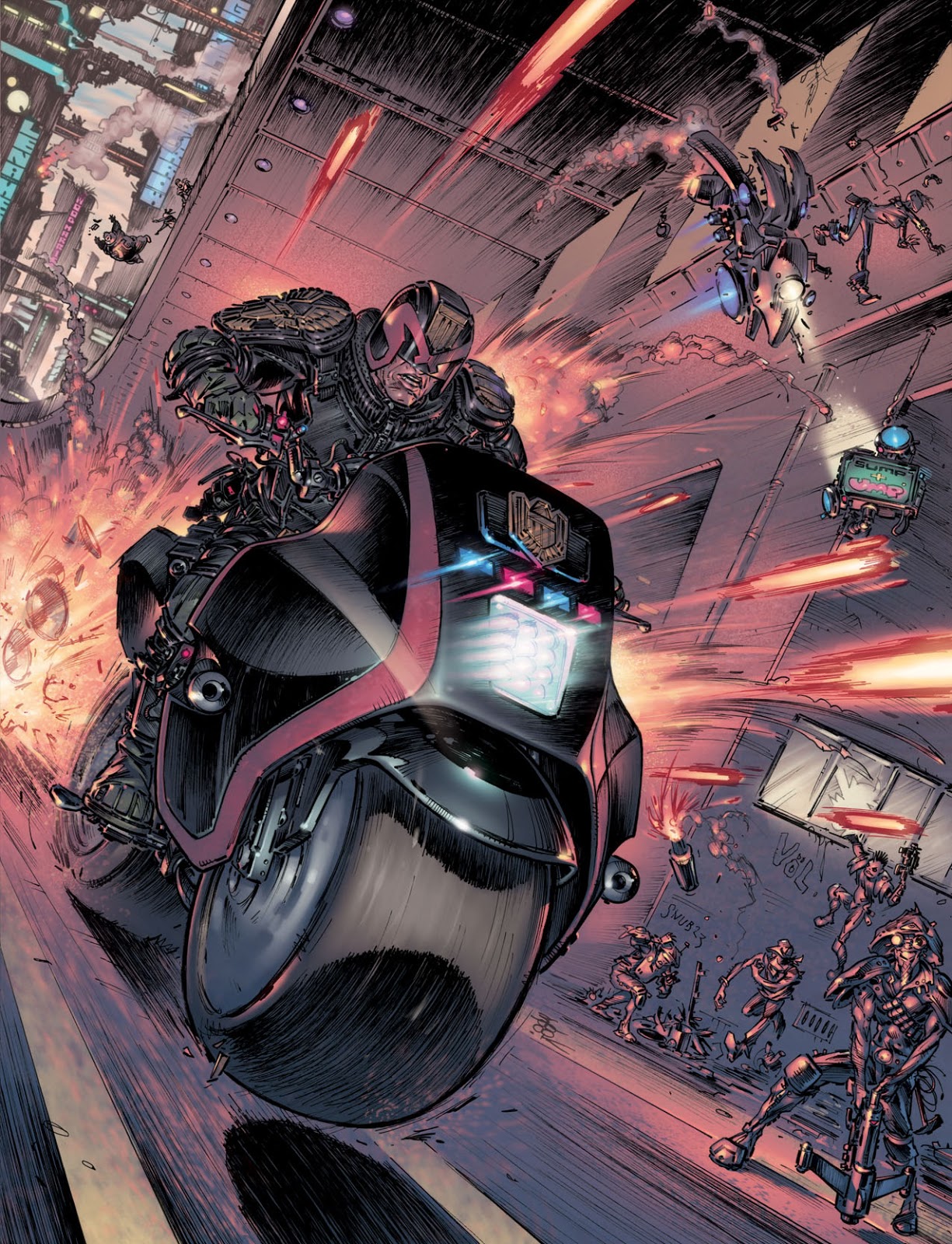 I can't think of a more enthusiastic artist than there lovely Boo Cook! I've had the pleasure of watching him sketch a few times and he always seems more excited than his lucky punters, a true credit to Thrill Power. I was over the moon when I saw he was doing a movie Dredd cover for 'Uprise' and even happier when I discovered this was to feature on the American reprint. The boy deservedly done good! Over to Boo to tell us more"

"When the email came in from Matt Smith Tharg about this cover gig I had Henry Flint's incredible San Diego print image of comic Dredd v Movie Dredd as my desktop. Plus I think I was probably wearing my Henry drawn Dredd 'Uprise' t-shirt too, so when Matt Tharg asked if I'd like to do a movie Dredd cover, it instantly fried my joy calibration motherboard! When he requested that Dredd should be on the Lawmaster, I blew the rest of my circuits!"

While Boo is rebooted, let's take a look at Henry Flint's Dredd vs Dredd image... 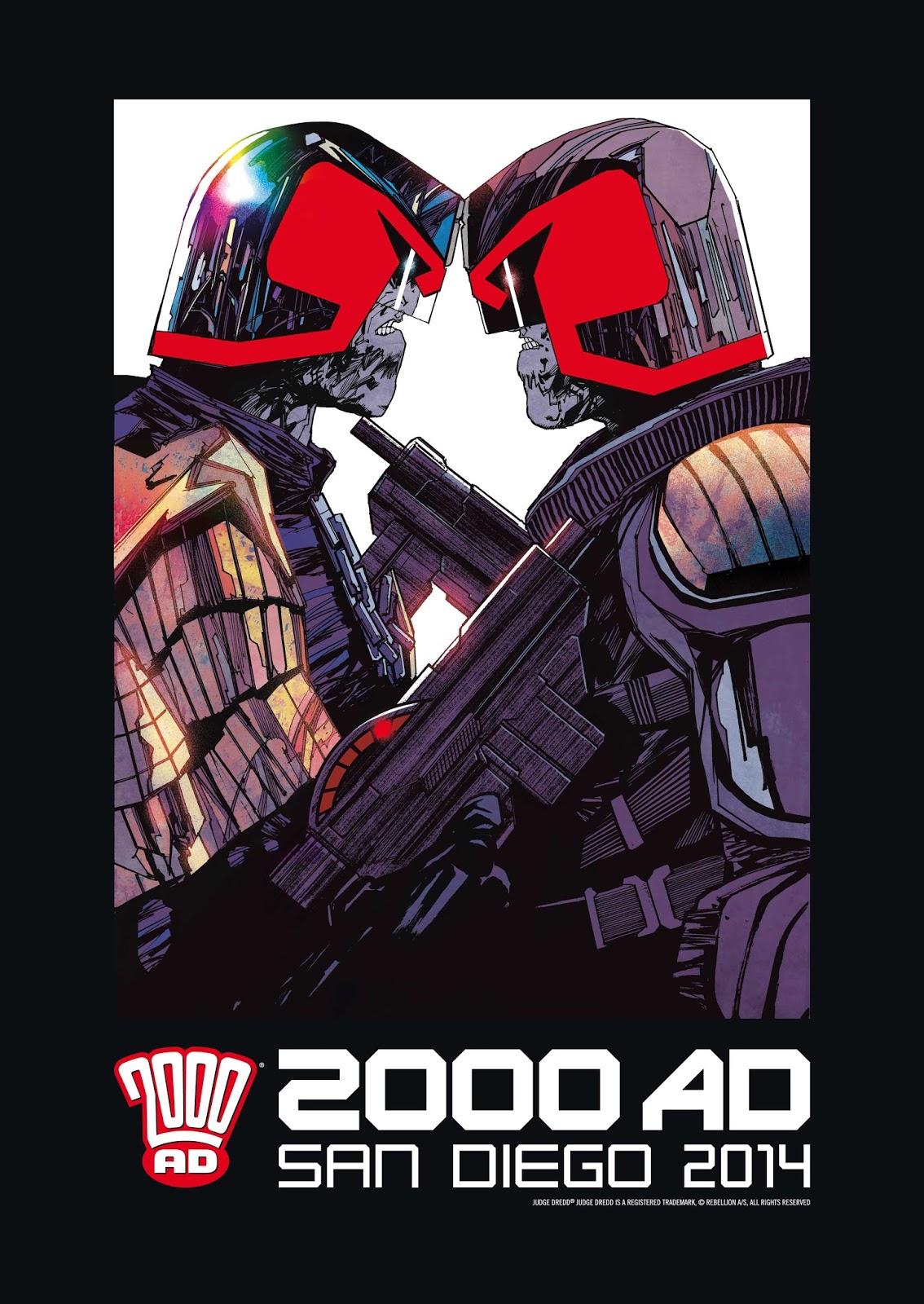 It seems Boo is back online, "I stuck the Dredd blu-ray on and paused it at some key moments during the bike chase scene at the start and boiled it down to 2 favourite shots. I didn't want to work exactly from the reference, it was more a case of using them as inspiration because amazing as the movie is I always felt the Lawmaster could've been a tad bulkier and generally more in yer face - the uniform too, and now I had a chance to realise that in a drawing..." 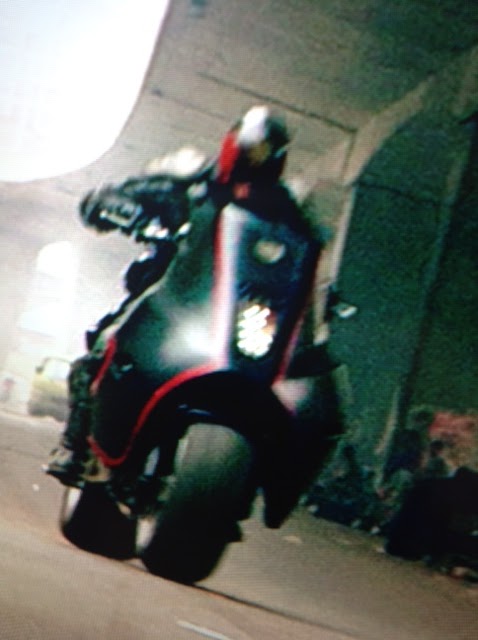 "Do you require back up?" 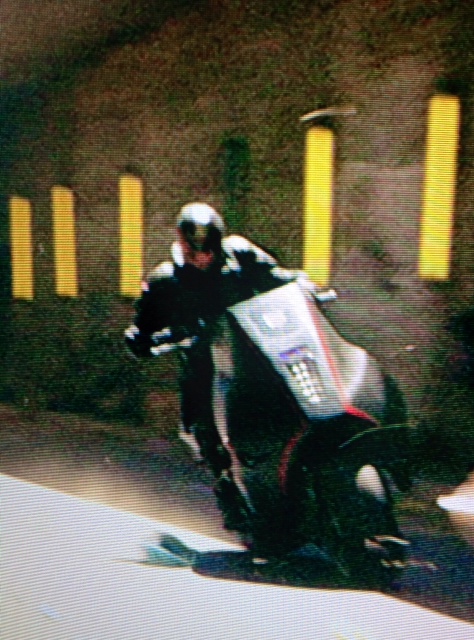 
"I had no idea what was meant to be happening in the story so I asked Matt Tharg about the background - he simply said "There's a riot" or words to that effect and I didn't need much more direction than that." 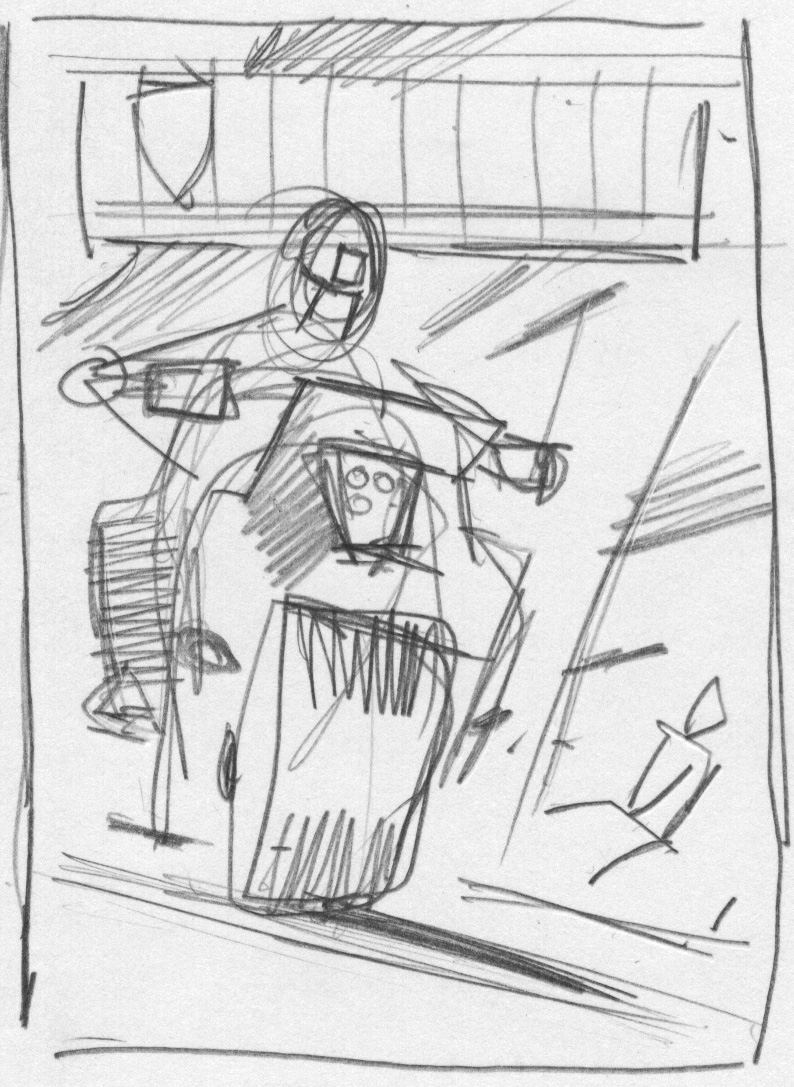 Baby Dredd with the stabilisers off. 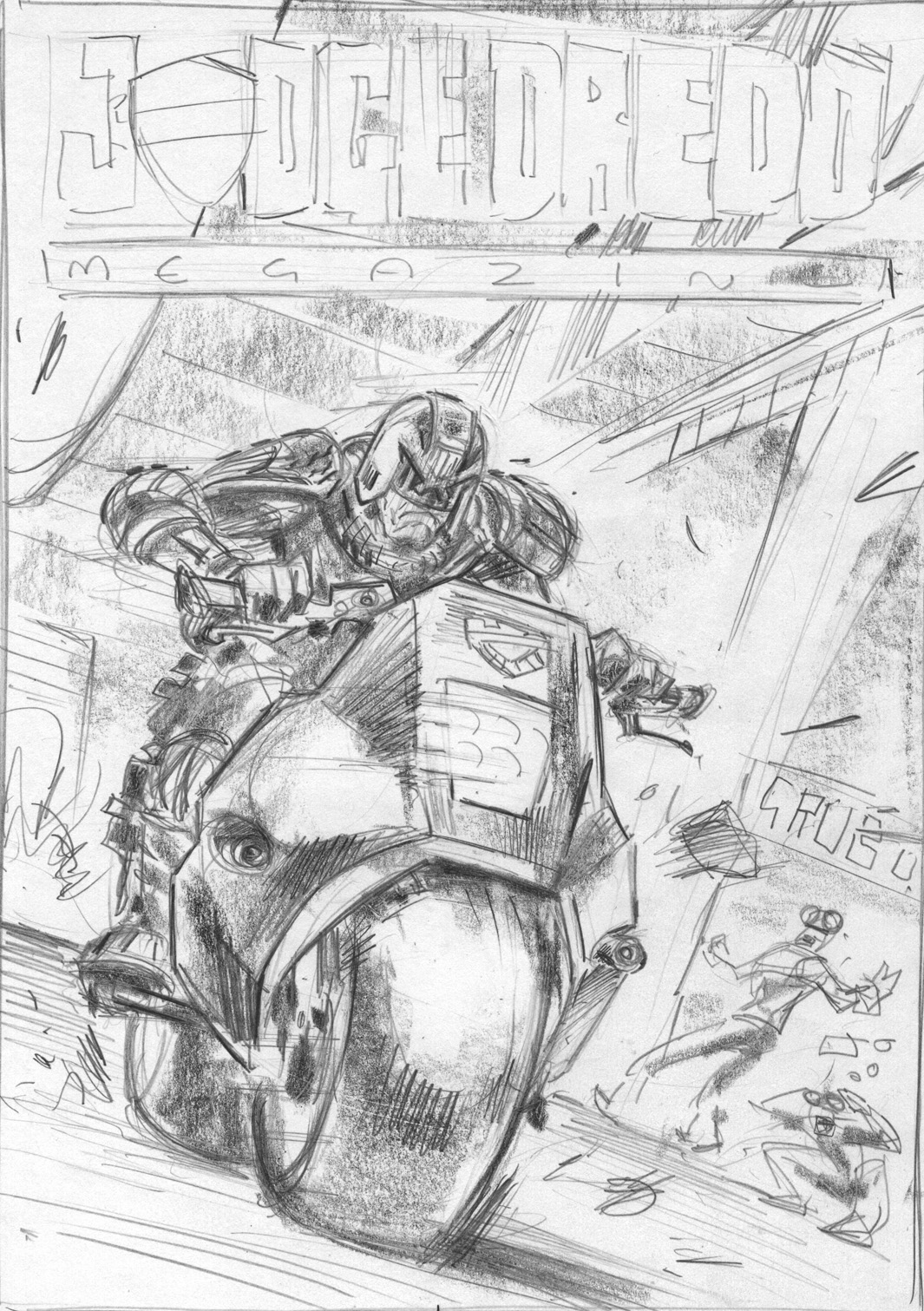 Check out those sneaky Ezquerra jaggies!

"I was so excited about doing this piece that I think you can see that excitement pouring out of the explosions, whizzing gunfire and general chaos. There's plenty of Easter eggs in there too - nods to Lena Headey, Wood Harris and Geoff Barrow whose superb "Drokk' album was originally slated to be the movie soundtrack. A scrawler has written 'Snub 23' on the wall - he's a prominent Brighton street artist that I'm sure would appeal to many 2000AD fans." 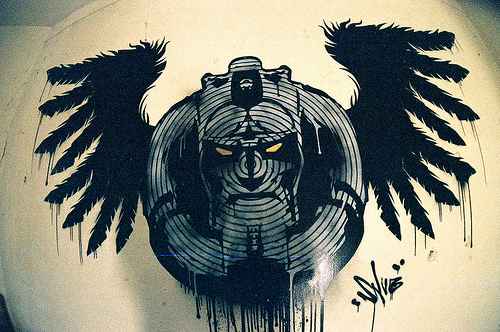 "Plus of course the obligatory pimping of the band i'm currently involved in 'VöL' (check out their Soundcloud page here) but it wasn't me who wrote that, it was a scrawler. most likely Chopper or The Phantom." Yes, I will not have this blog used as a shameless vessel of self promotion! 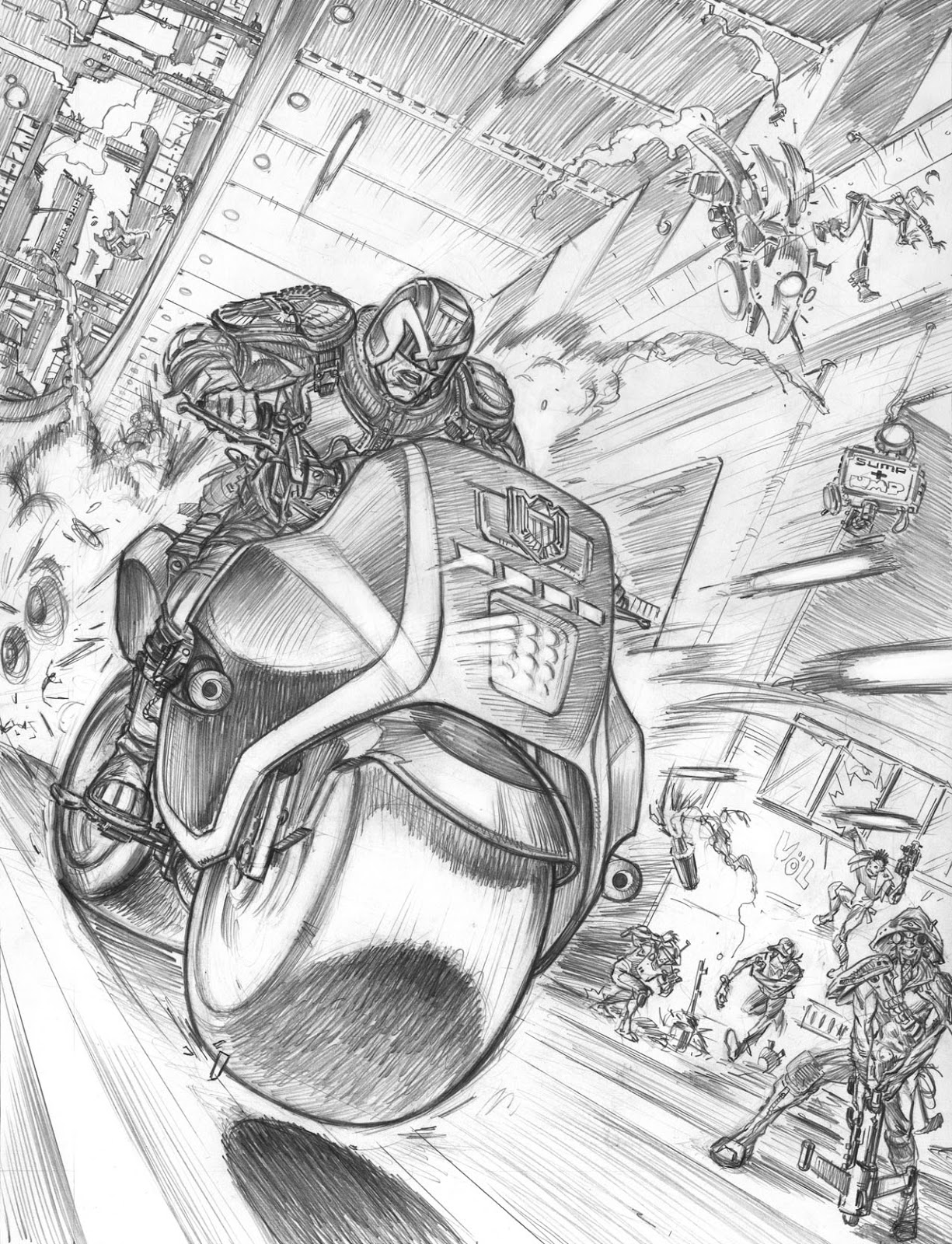 Sump and Ump!?! A deadly combination!

"Matt Tharg asked if i could provide an inked version of this cover for a variant edition in the states so i had to try and make sure it worked in black and white as well as colour, so the inks are very tonal. It took a long time. I always take a long time, but this took over 5 days in total - why rush it? I was having the most fun I'd ever had doing art since i drew my first picture and i really hope that comes across." 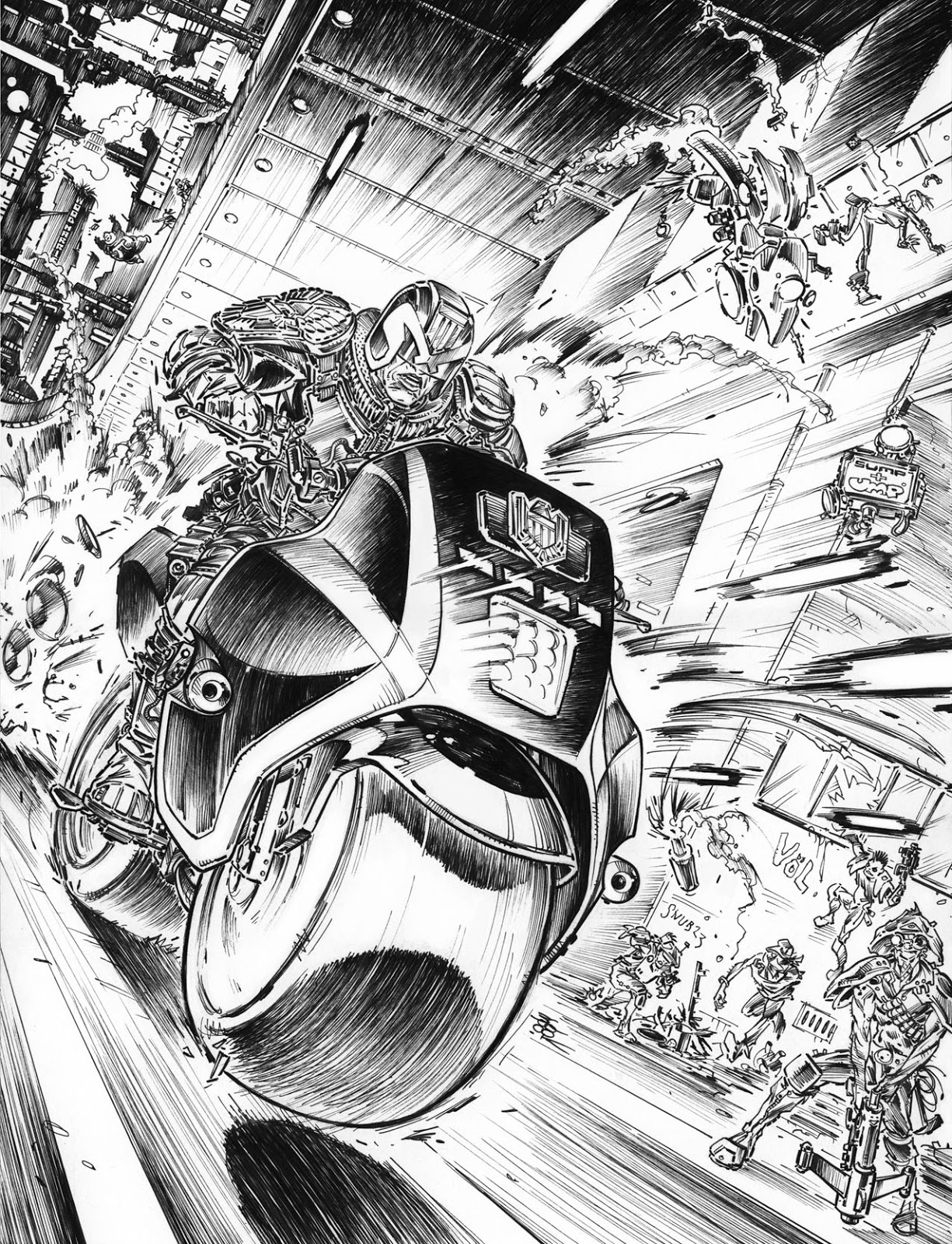 Pi in the Sky?


Here's Boo's first picture. I must admit, when I saw the thumbnail, I thought he'd sent me a picture of an erm... feminine hygiene product with that strange blue water they insist on pouring on them! 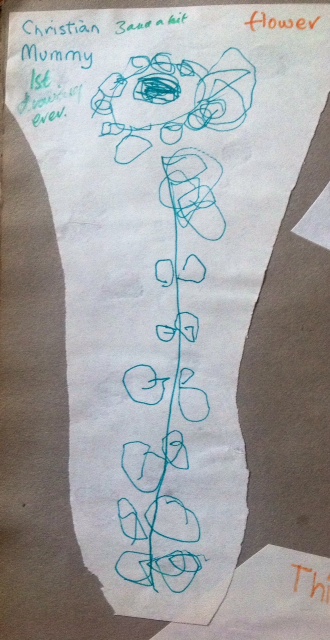 New Always Ultra - take in moisture like a flower

And here's the stunning coloured version, which totally captures the anarchic chaos of Mega City One! A final word from Boo "MEGATHANX to Matt for throwing it my way!"

Dredd knew he shouldn't have eaten that synth-vindaloo!

And MEGATHANX to Boo for throwing this our way! It's always a pleasure to see his work and share his enthusiasm! Check out his magnificent blog here!

Dredd Uprise no 2 is available on November 26th.
Posted by Pete Wells at 03:30