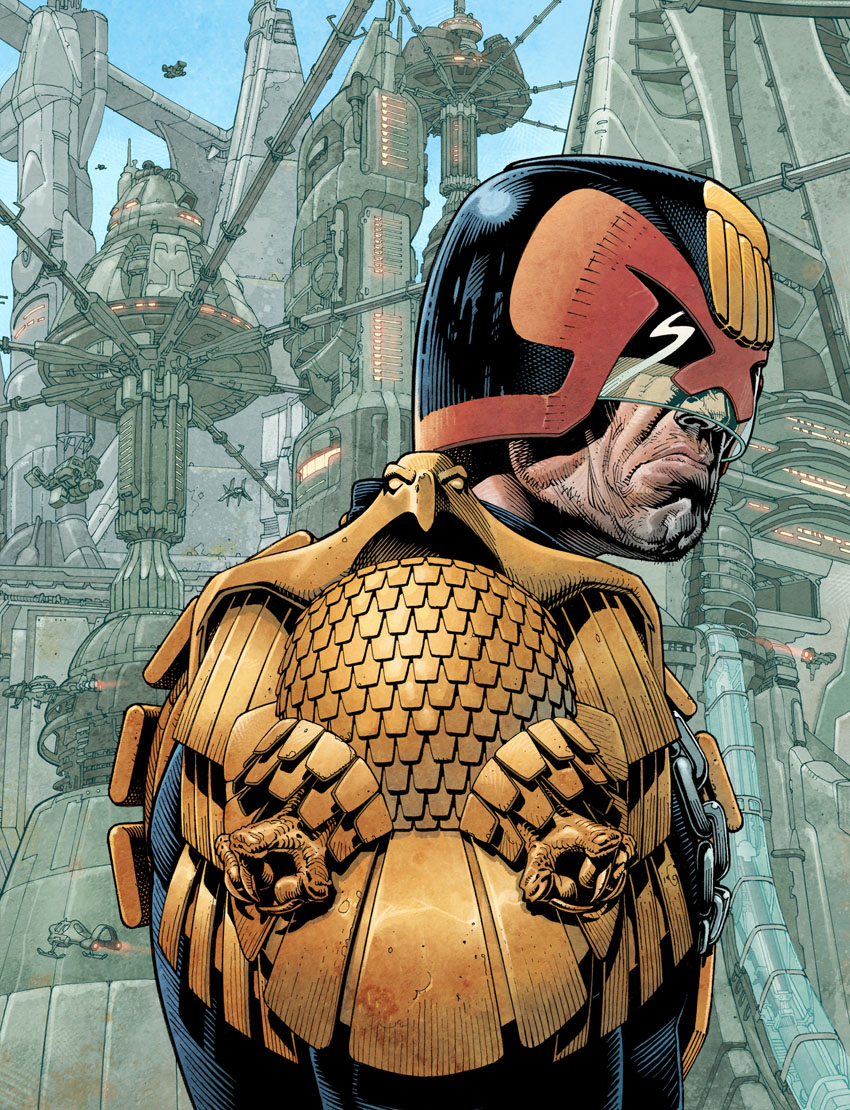 Well dear readers, did you know that kettle + bowl + stapler + screwdriver set = Mega City One? It does in the uber-creative brain of Mr Cliff Robinson! But more on that later...

The dream team of Cliff Robinson and Dylan Teague are back with another of Cliff's Mega-City equipment studies, this time, we get up close and personal with the Justice Department regulation eagle shoulder pad. Cliff really brings the piece to life, giving form and function to something we all too often choose to ignore, with it being somewhat impractical and all...

Anyway, below you can see Cliff's original ideas and first prelim sketch. From what I can make out, it looks like we were going to get a study of Dredd's arse or his crotch, so well done Tharg for going with choice #2! 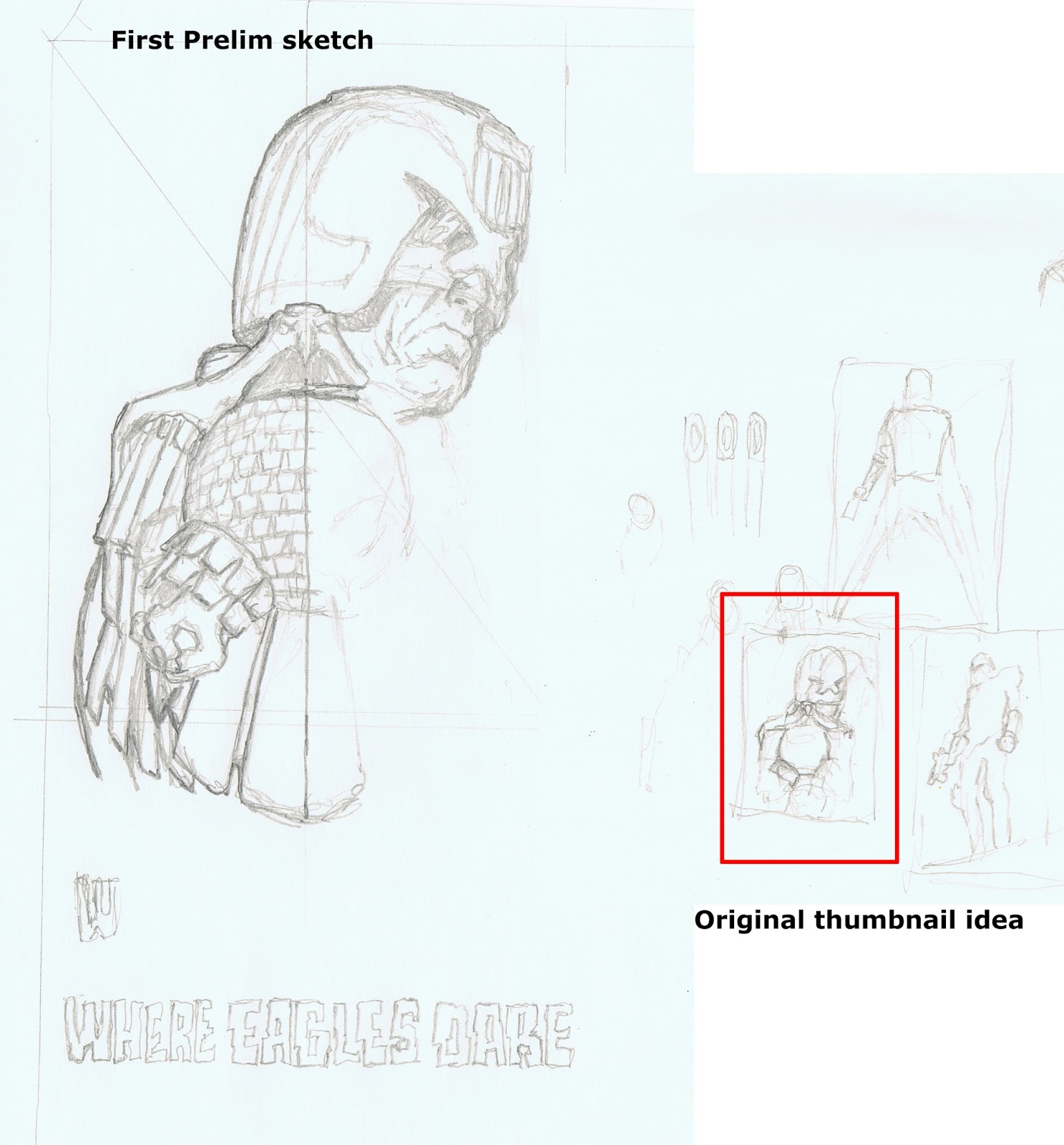 
Cliff's mock up of the cover layout, nice to see the editorial staff went with Cliff's strapline (though mine is better!)﻿ 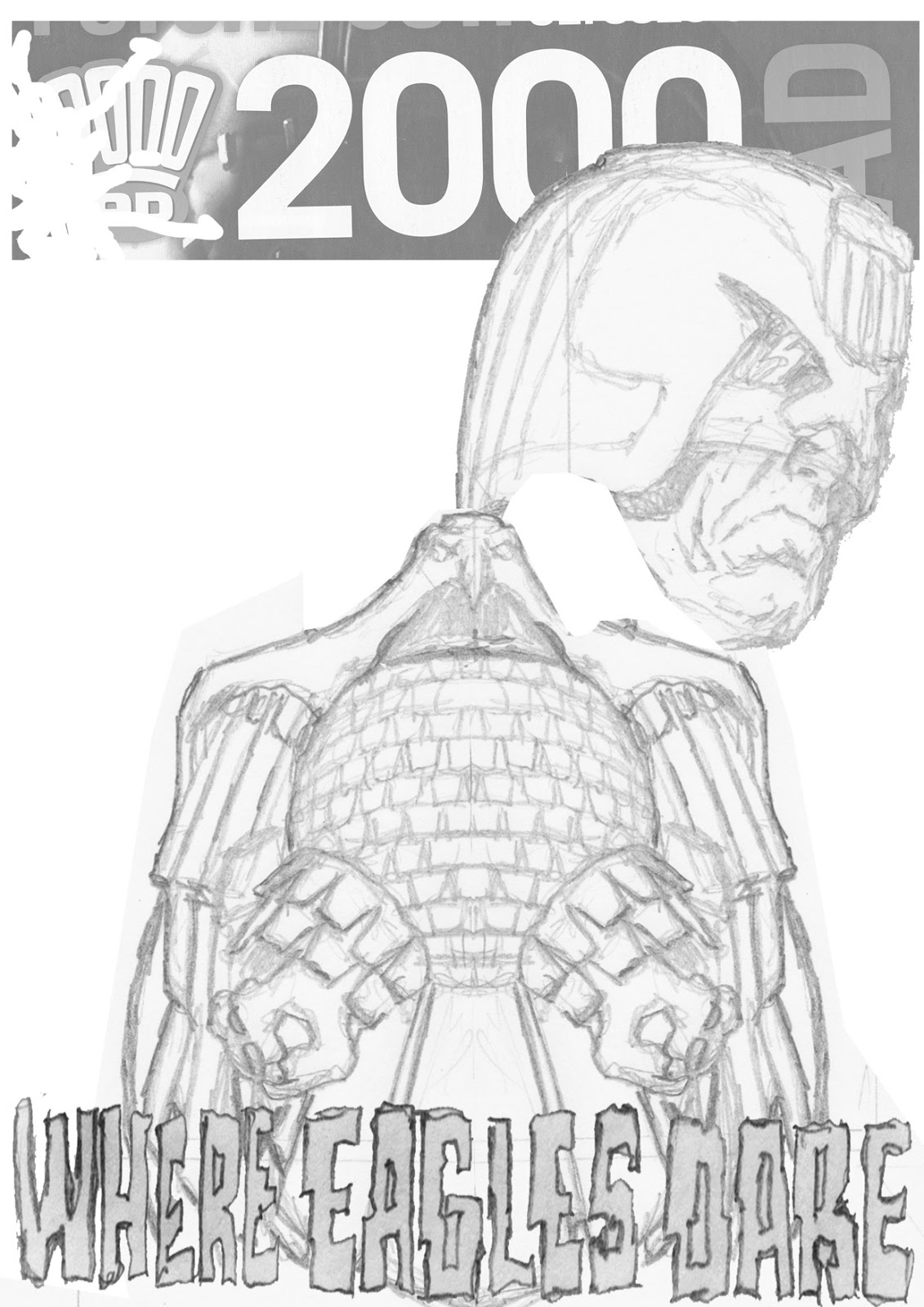 What do you call a sick eagle?
Ill-eagle!


With the composition sorted, Cliff begins to meticulously ink the piece...﻿ 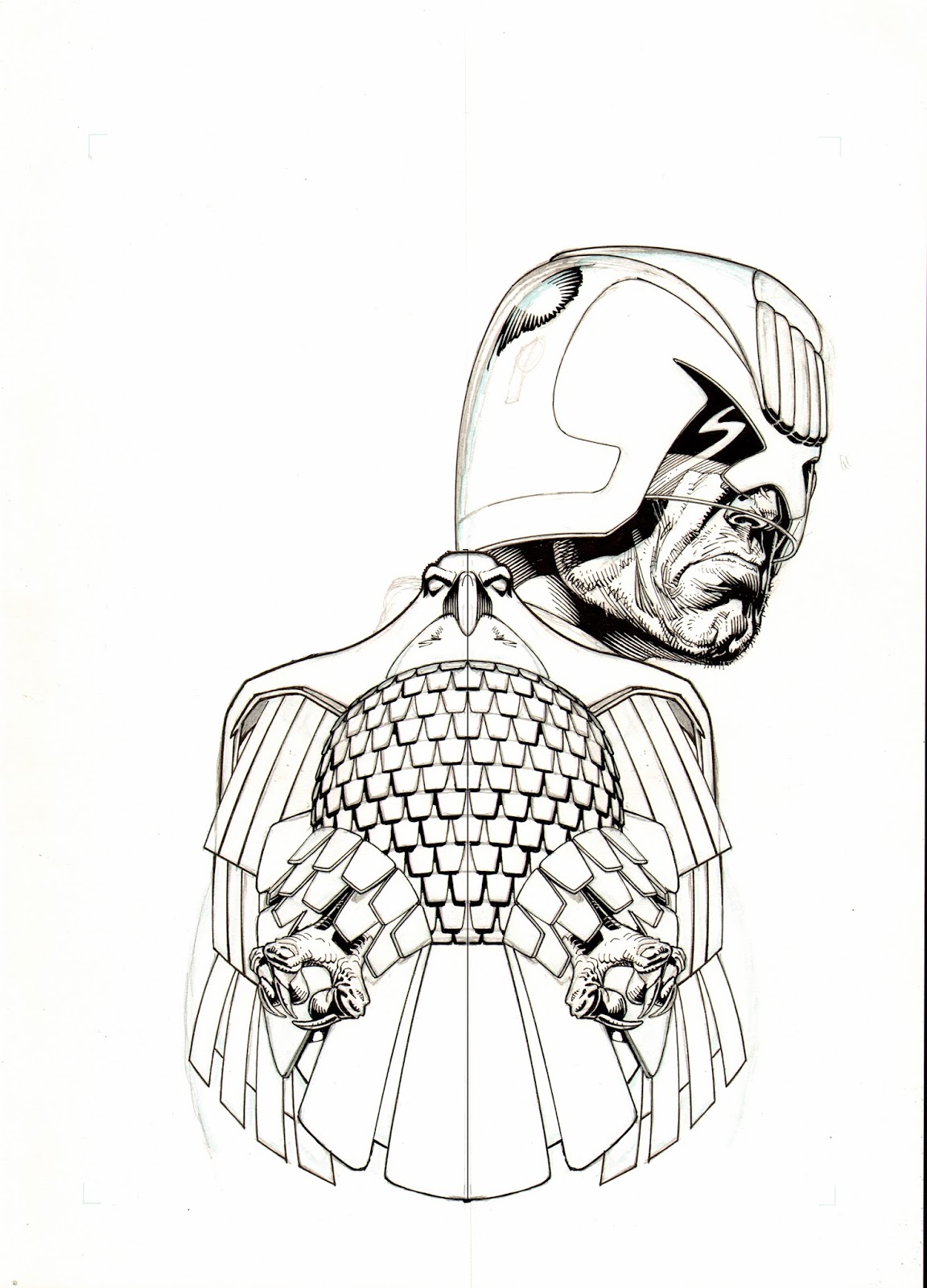 Spread-eagle
So far, so good - but here's where it gets a bit weird! Over to Cliff...
"As I was searching for prelims for your wonderful blog, I realised I couldn’t find any sketches for the Mega City One background. Then I remembered I’d used household bits’n’bobs to make up the city..." 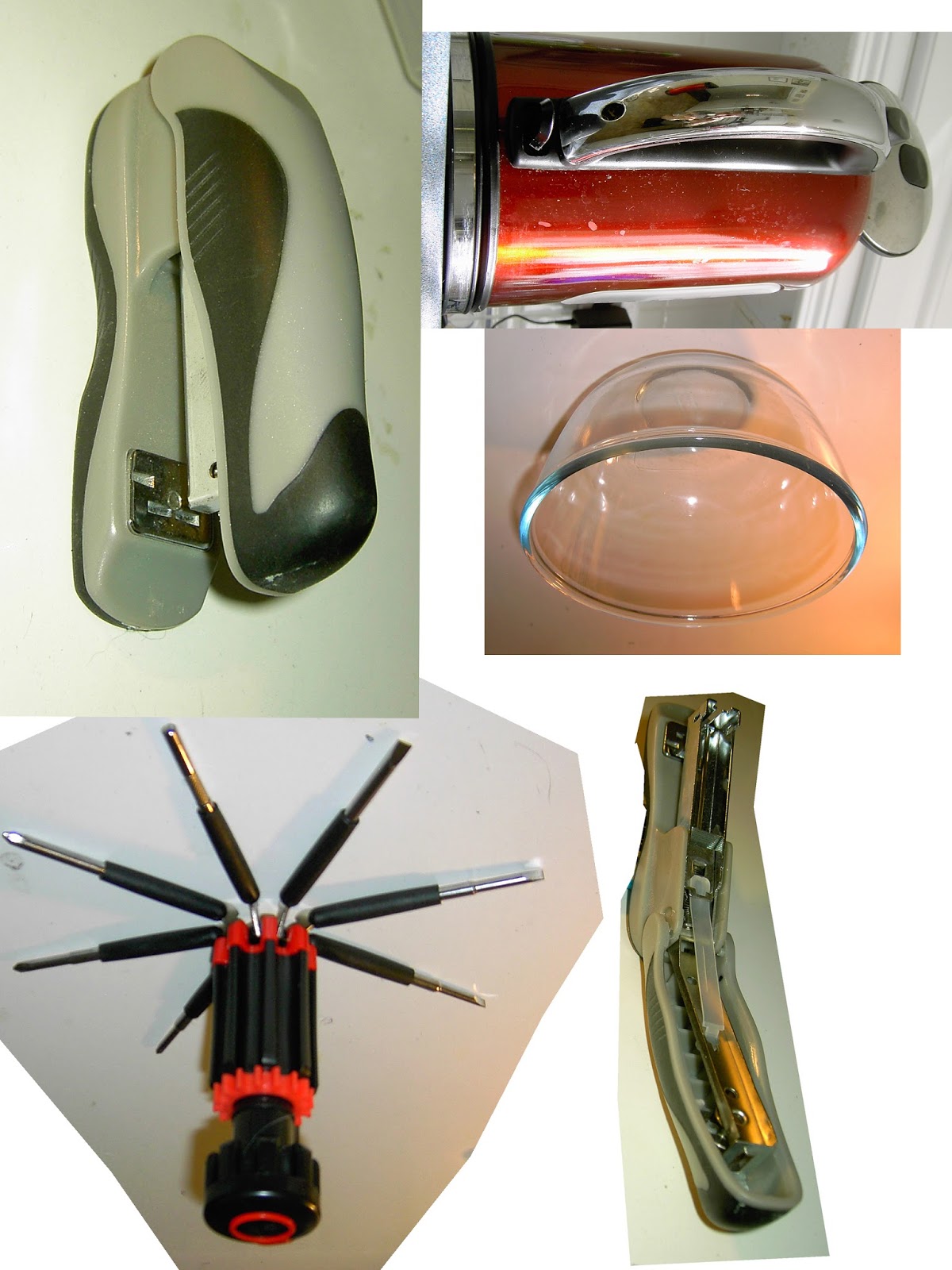 All of these items are made of the finest polypropilop!﻿

"I photographed them, arranged them on the computer, then printed them out in blue line around my picture of Dredd - yes, I actually fed my inked drawing of Dredd back into the printer!!! A procedure not for the faint hearted!" 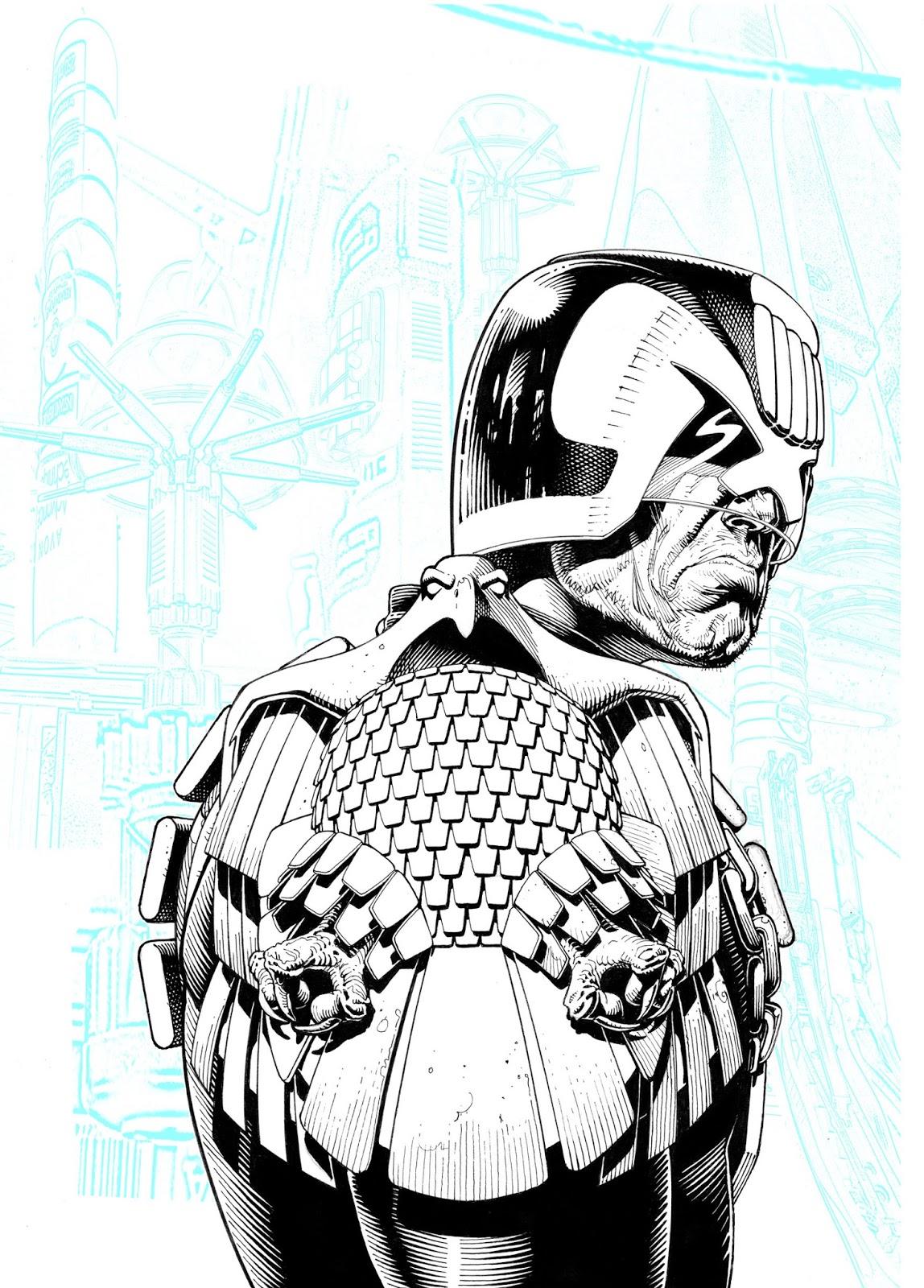 I'll never look at a stapler the same way again!﻿

"I then pencilled in all the surrounding detail on each of the 'buildings' and ended up with a passable Mega City One!" 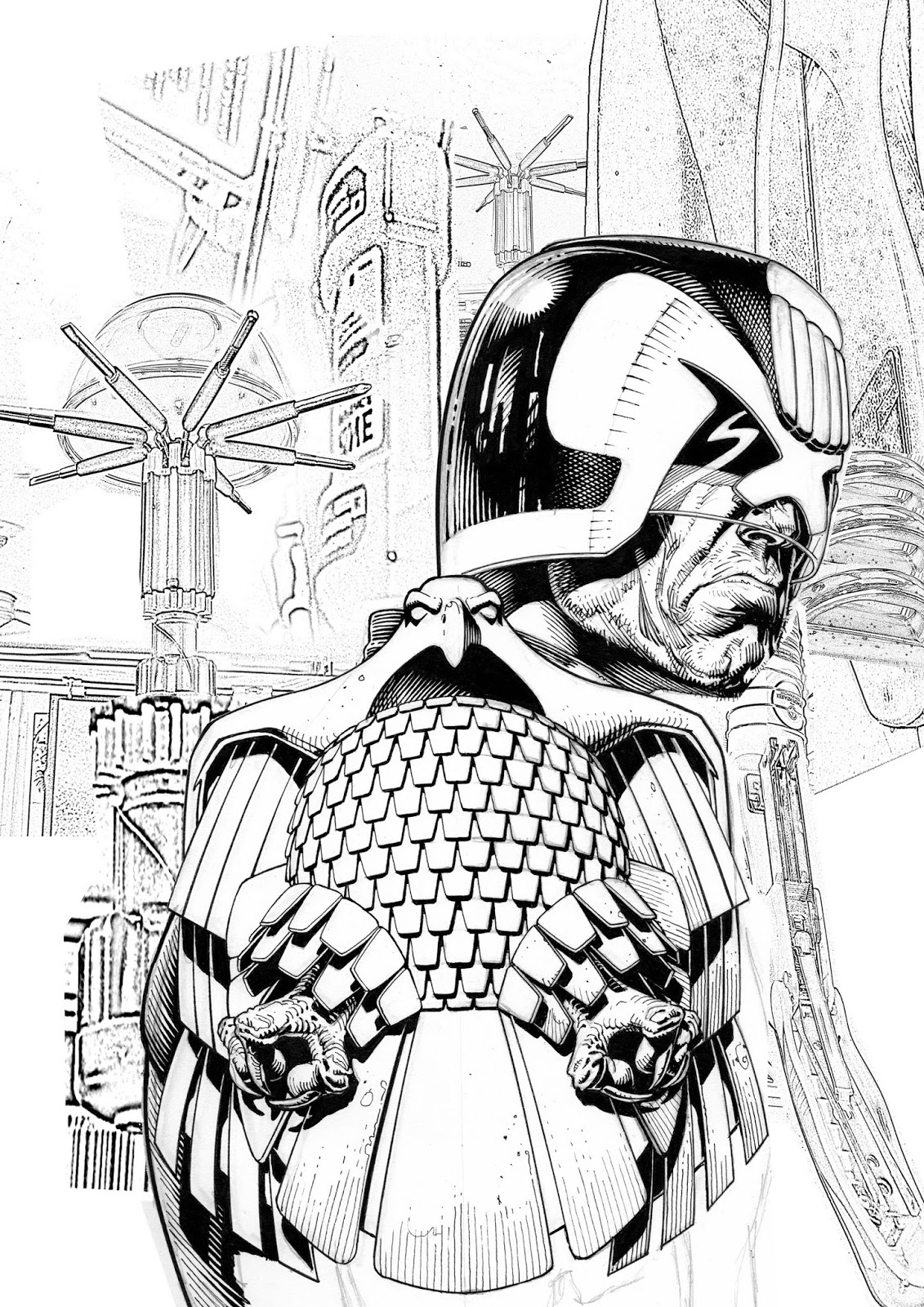 Screwdriver Heights was one of MC-1's less salubrious blocks...﻿


And below is that 'passable' version of Mega City One. Passable!?! Passable!?! It's brilliant!﻿ 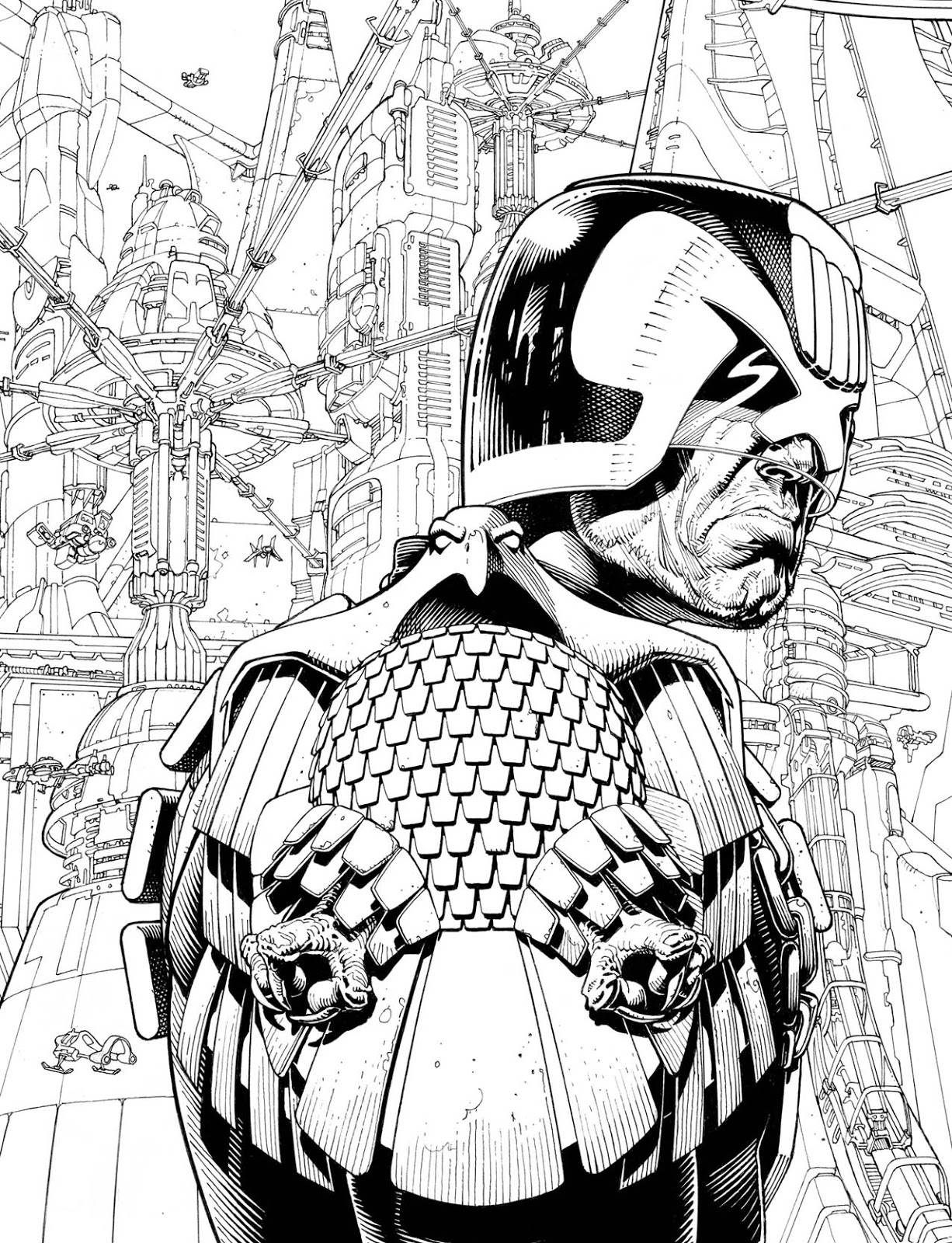 Everything but the kitchen sink...﻿

This week Cliff is making a rare appearance at a comic convention, the Lille Comic Festival, in fact. He provided some gobsmacking artwork for the event, based on Frank Frazetta's poster for Clint Eastwood's 'The Gauntlet." 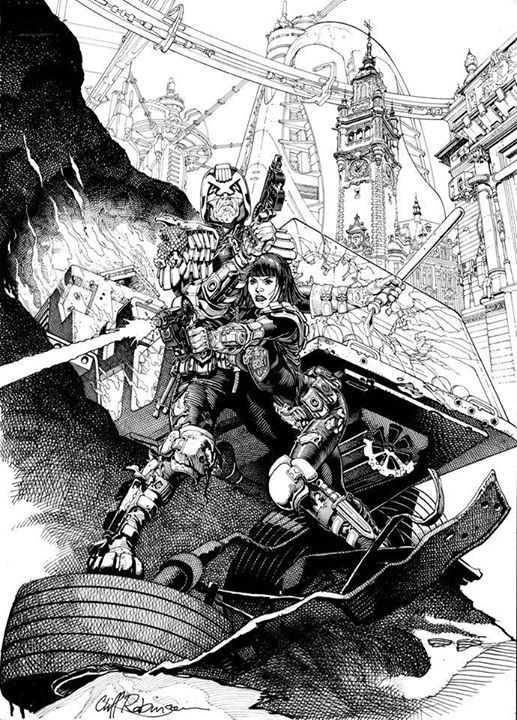 The screwdriver set and kettle make a guest appearance!﻿ 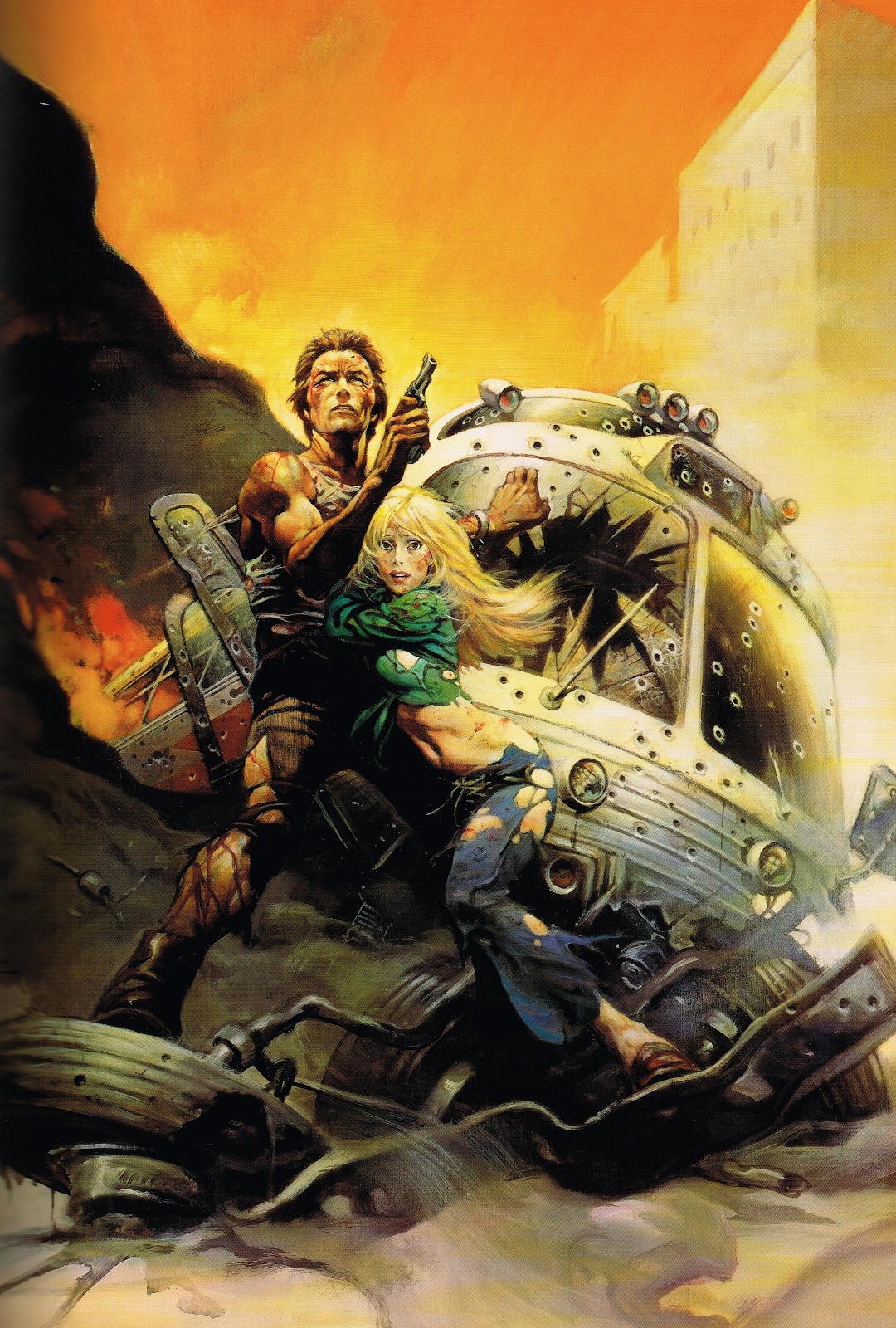 Everything comes back to Eastwood...﻿

Getting back to the 2000AD cover, with the inks done, it was over to legendary colourist Dylan Teague who had the unenviable task of bringing the image to life in glorious techno-colour! What an amazing job he did too...

﻿
This cover should win an Eagle Award﻿

And here's how the prog looks on the shelf - in a word, spectacular! 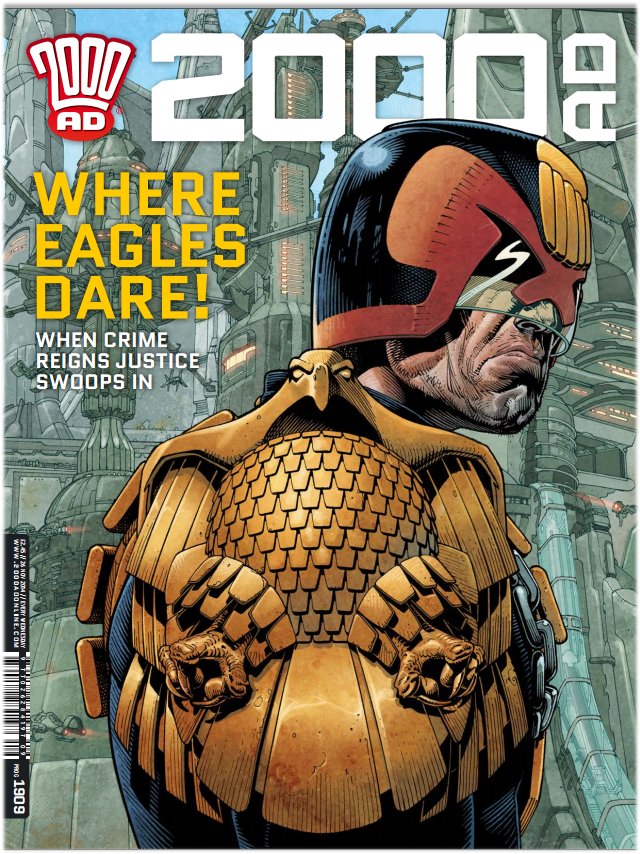 Be careful or you'll be doing bird﻿

Lucky sod Dylan is also going to Lille and has been hard at work colouring prints for his mate Patrick Goddard, not too shabby eh? Firstly we have a take on the classic Reservoir Dogs poster... 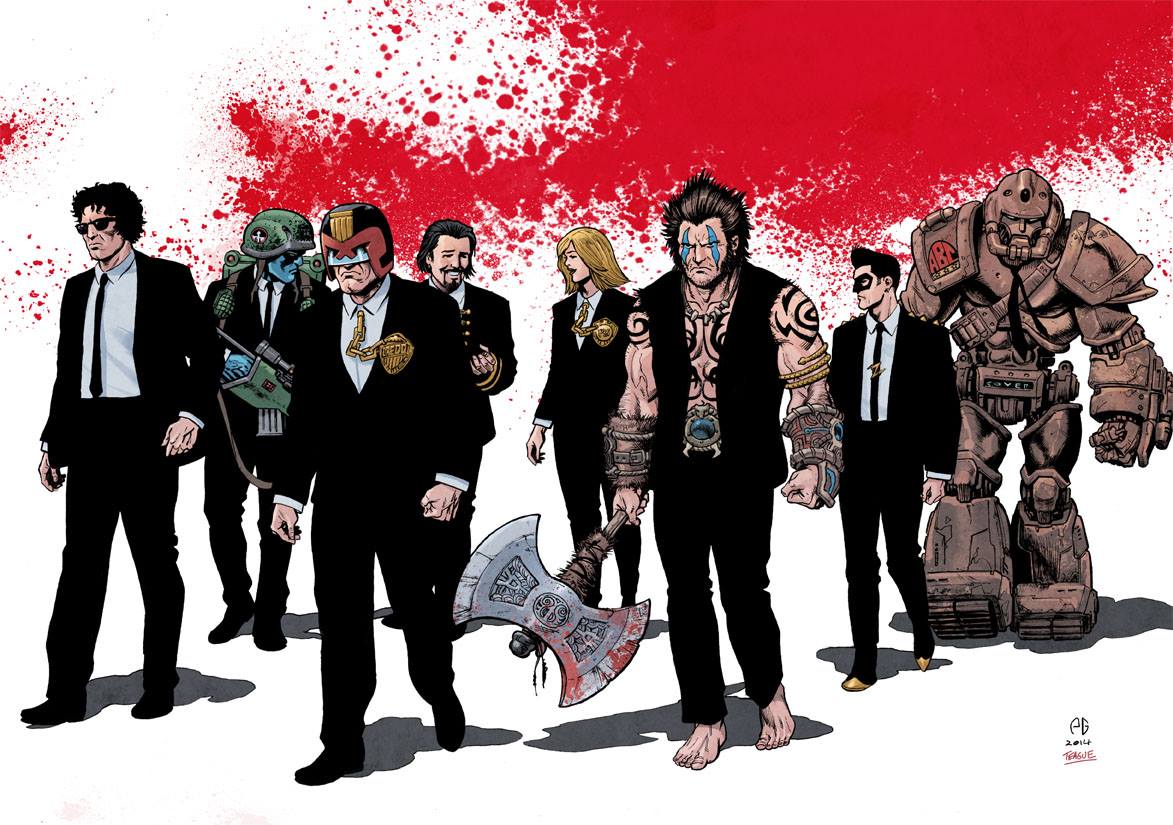 Reservoir Progs
And secondly, we go back to Eastwood again for Patrick and Dylan's take on the classic Magnum Force poster. Do you feel lucky...﻿
﻿ 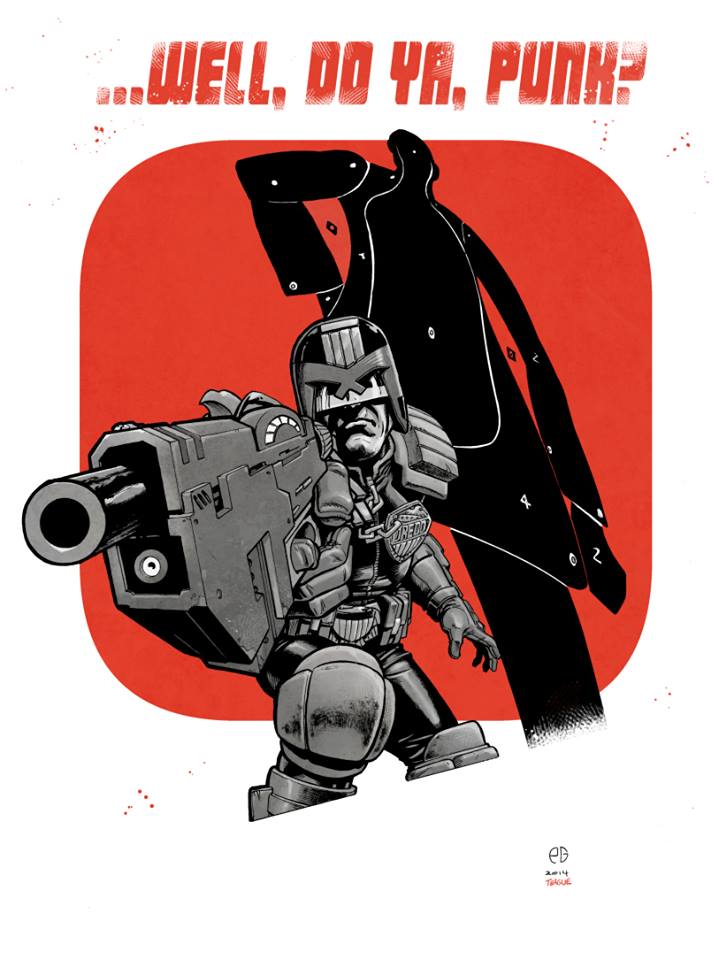 Well Joe, I've got me health so I can't really grumble. Thanks for asking though.
Absolutely massive thanks to the boys for sending the images, an absolute classic cover and no mistake!
Posted by Pete Wells at 13:54