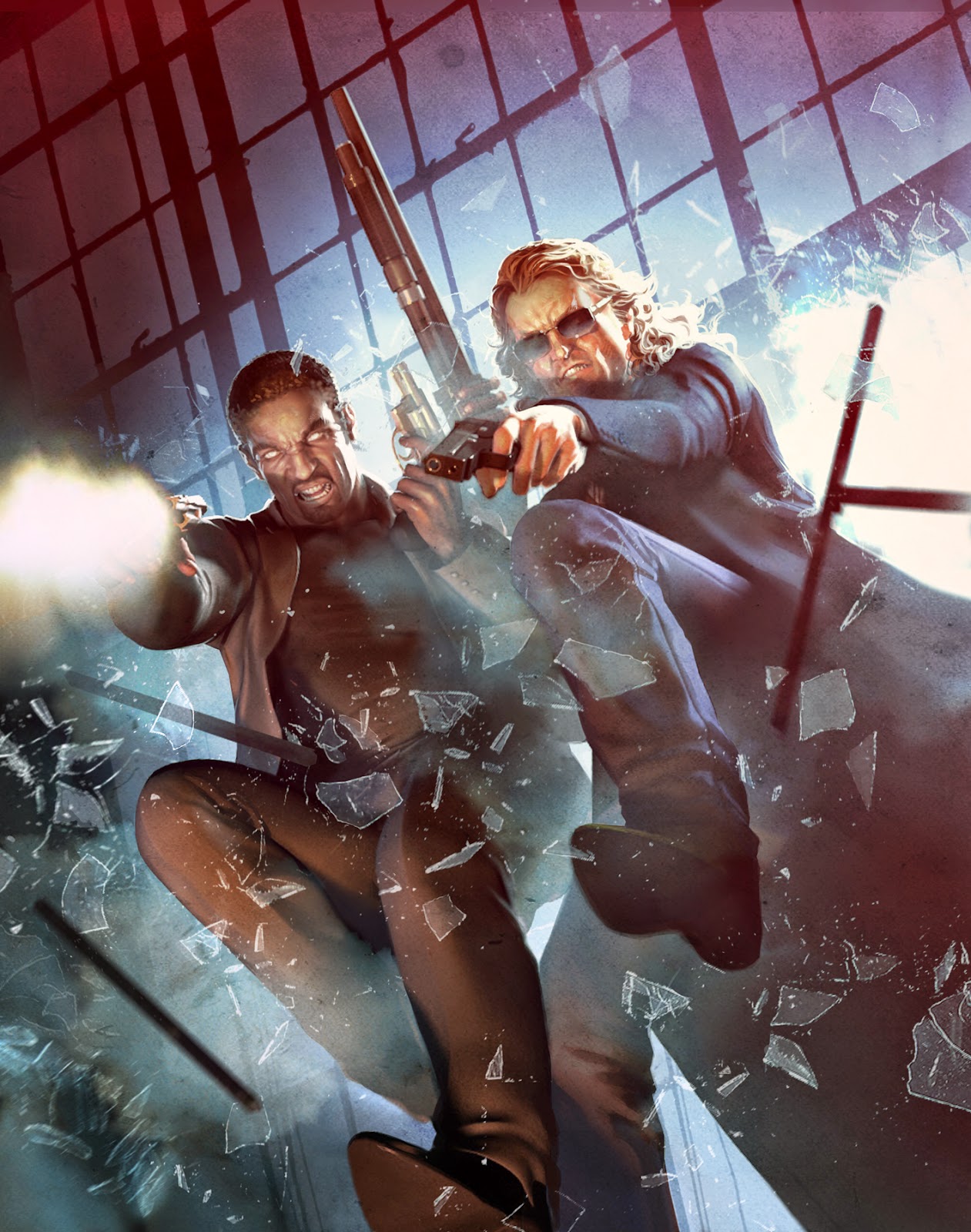 Gruff voice on... "Coming this summer... from producer Michael Bay... starring Jamie Foxx and Kurt Russell...  get ready for... Sinister Dexter and the Bunch of Cults."

What a funting smashing (ha!) cover by Alex Ronald! I'm delighted to see the Vampire Vixens of the Wehrmacht artist back on my Prog following his outstanding Ulysses Sweet cover a few progs ago. Great to see him tackling Ramone and Finny too, he's really brought the pair to life.

This is a  fantastically cinematic image from the artist sums up the strip perfectly. This was certainly the intention, Alex seeped himself in film nostalgia to construct the cover and included several movie reference images that he used for the cover, saying "All those teenage years watching crappy action flicks wasn't for nothing after all!" 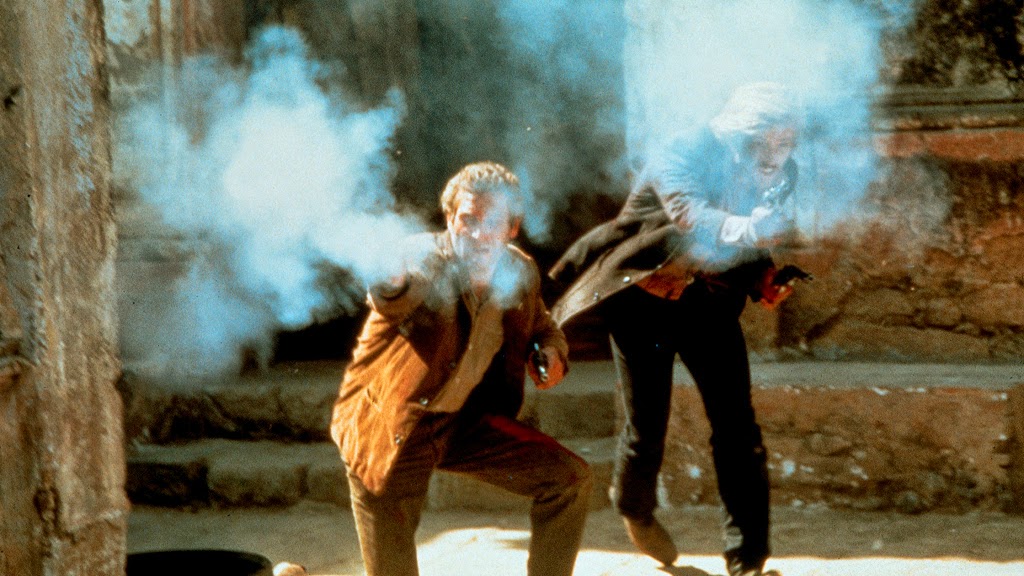 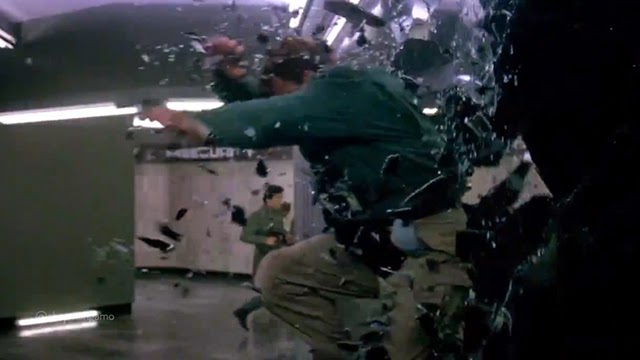 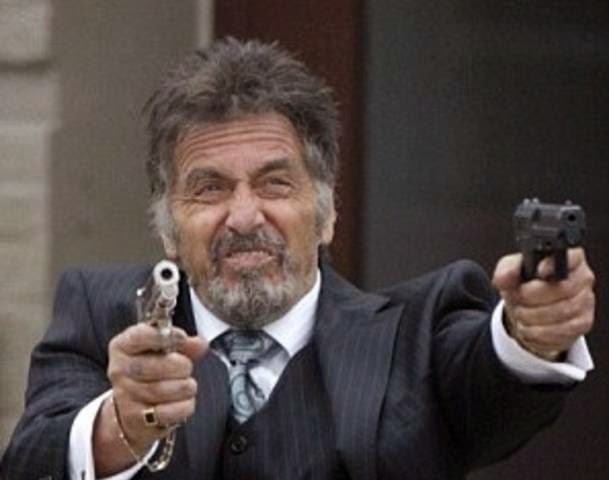 Wallowing in such classic movie nostalgia led to this rough black and white sketch (rough being Alex's words, not mine) showing the pair erm... stealthily infiltrating the compound of The Pastoral Collective of Generica. Disclaimer: Contents of the cover may not reflect story inside!

And here's the final image again, which is just amazing! I'm a massive, massive fan of Alex's work and would love to see him tackling another Dredd cover (please Mr Tharg?)

Here's how the prog looks on the shelves. Liking the glass effect logo a lot! A cool cover this which gave me a real 'wow' moment when I first saw it... 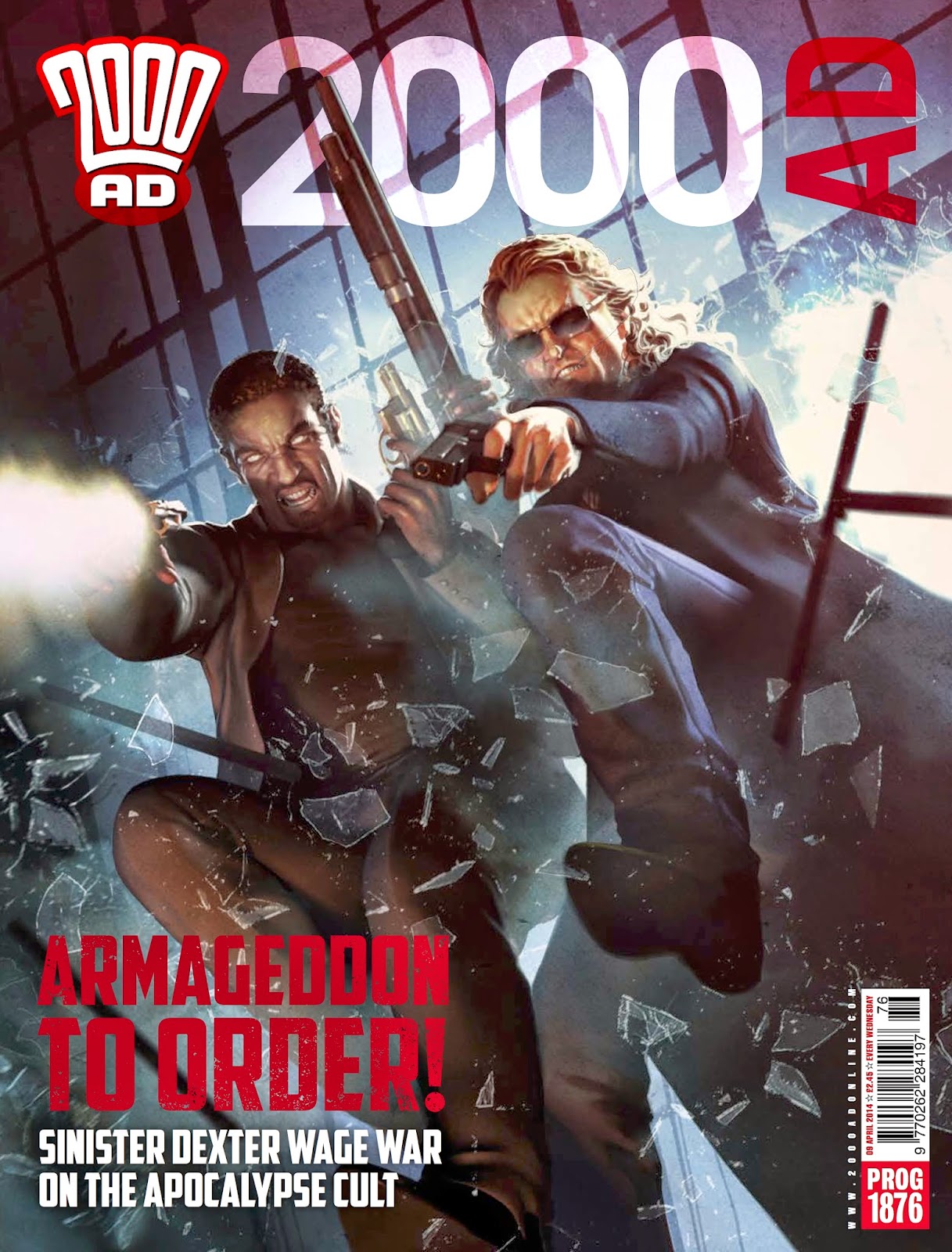 Crash! Bang! Wallop! What a picture, what a photograph!

As an exclusive bonus, I'd like to share the story behind as well as a wonderful alternative version of Alex's homage to Brett Ewins' cover of 475 (as shown in the Ulysses Sweet post...) 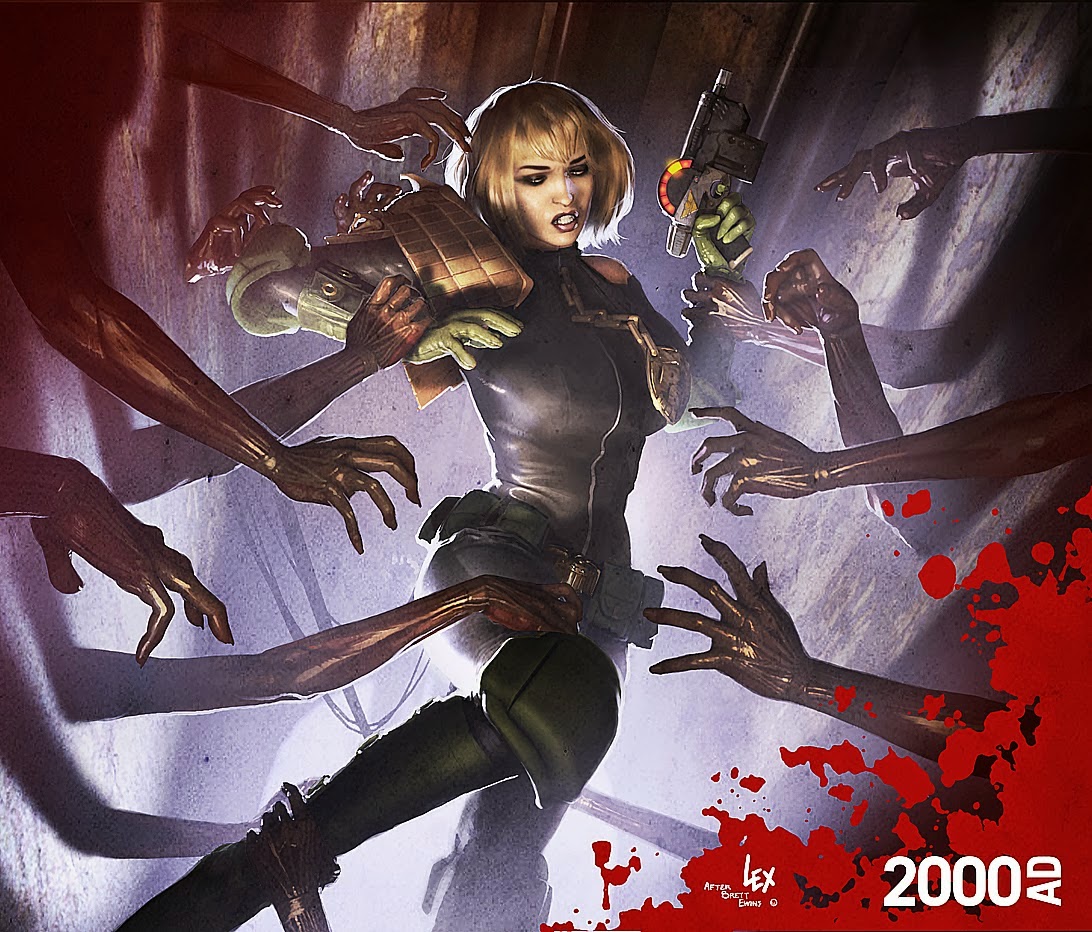 The story behind the cover is that he and fellow artist Flint Lockjaw (I'm sure you'll have heard his big gob on the brilliant Everything Comes Back to 2000AD podcast) decided to do an art swap. The pair are mutual fans of each other's work - Flint works in animation and is responsible for the animation of Mrs Brown's Boys as well as working on Don Bluth's Anastasia and Teenage Mutant Ninja Turtles. Flint is currently at the helm of the very exciting Dredd Project too. The pair decided to take the cheesecake/Grindhouse approach to Anderson and swap art. Below is fantastic Alex's version... 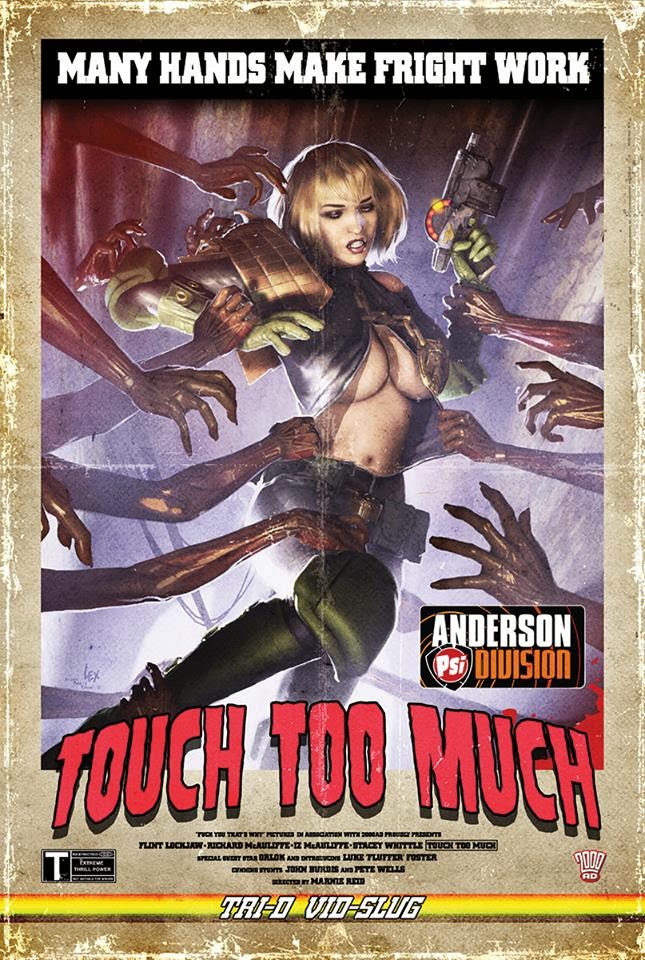 Check out the credits for some familiar names - cunning stunts? The cheek!

Here's Flint proudly showing off his print. There's only two of these in the world and I am lucky enough to own the other, thanks to Mr Lockjaw! 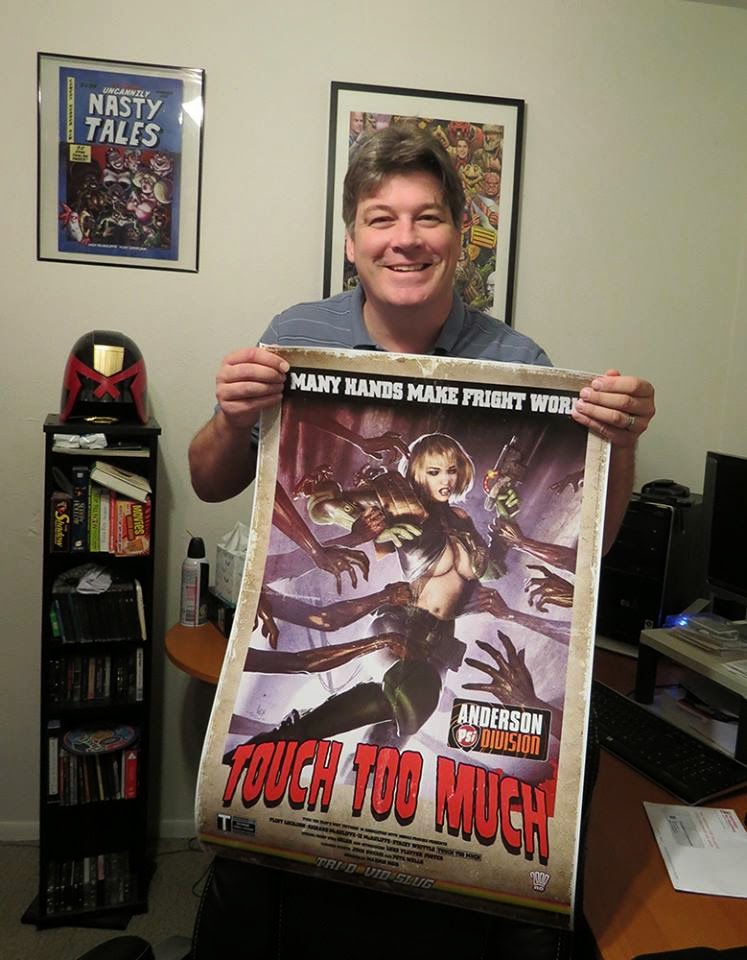 Here is the man you've no doubt shout at on your iPod!

Here's Flint's side of the deal which absolutely hilarious! Firstly the pencils... 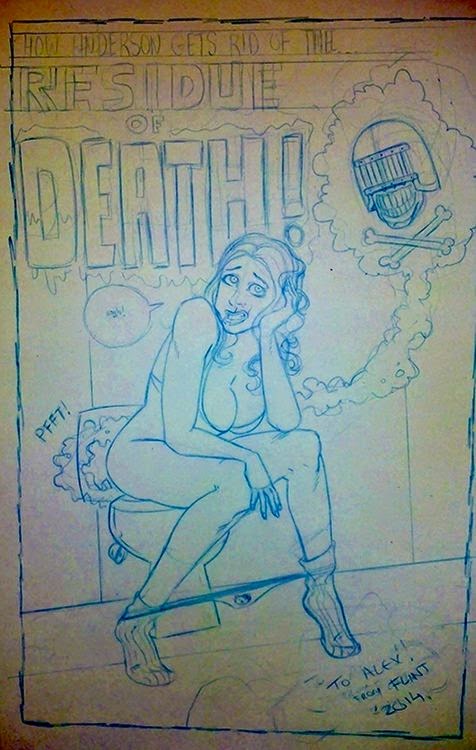 And the brilliant inked version... 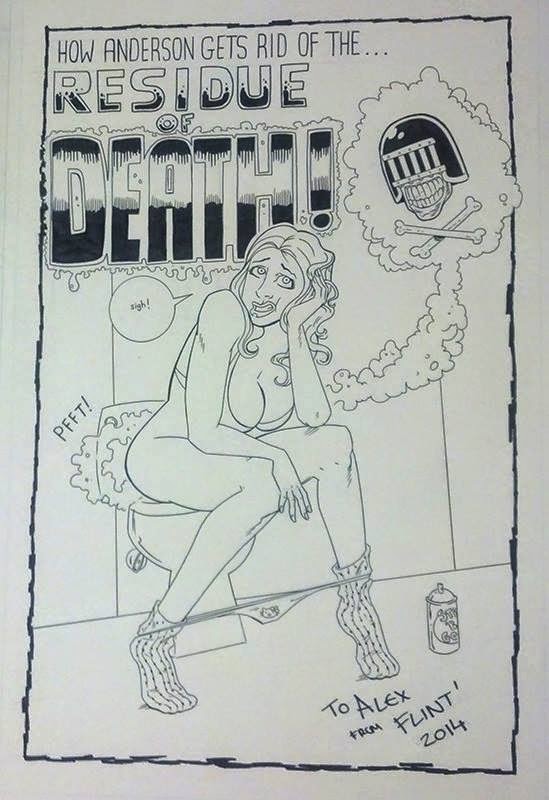 Stench Be Gone - Does exactly what it says on the tin!

Alex is a lovely fella, always very supportive of new talent on the 2000AD message board and has contributed stunning, print quality imagesto the annual advent calendar without fail! Here are his previous contributions starting with 2011's festive Flesh... 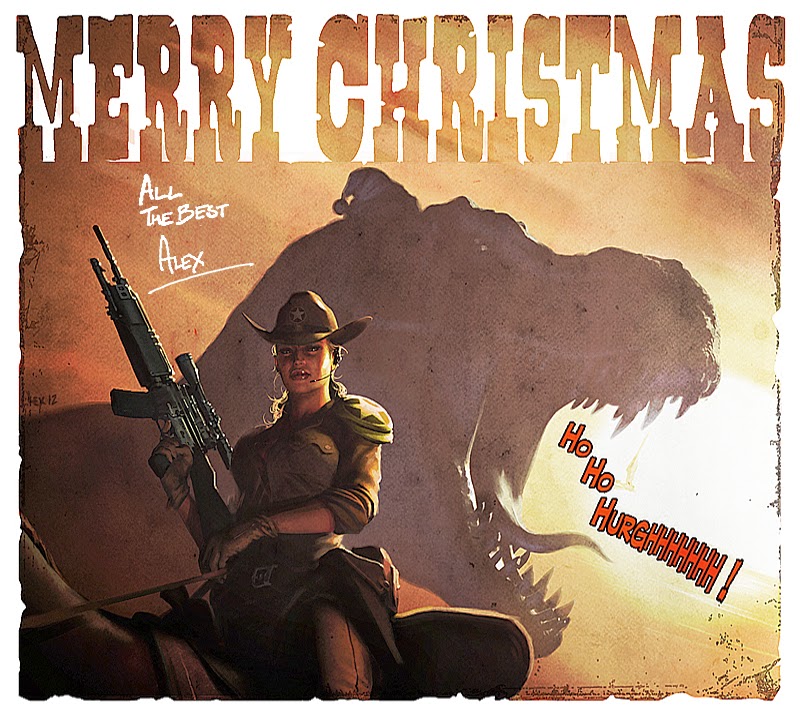 Wishing you a merry Fleshtive season. Can't beat a bit of Cava at Christmas... 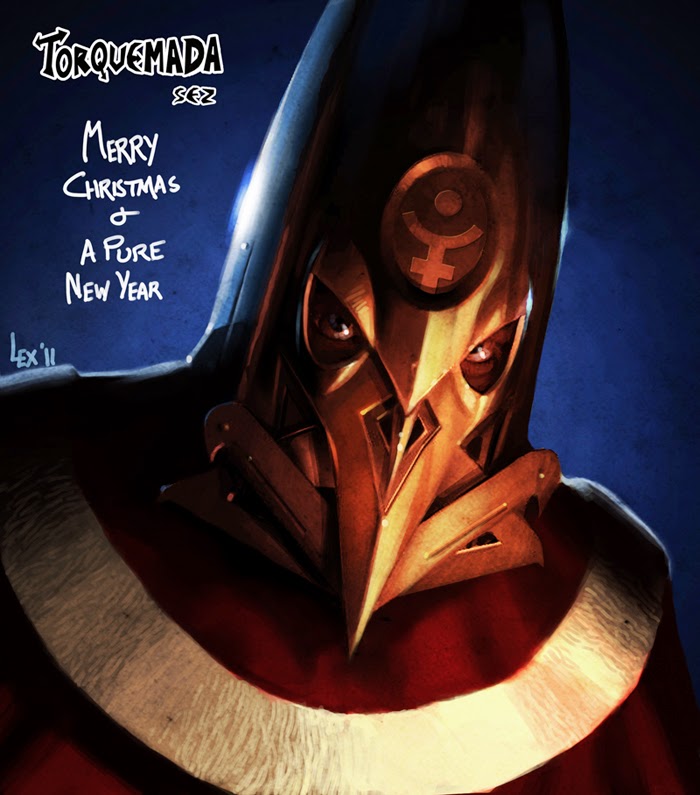 You really don't want to get on his naughty list! Giant thanks to Alex (and Flint!) for sending the images and for being all round smashing fellas!
Posted by Pete Wells at 00:42