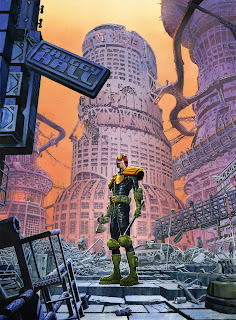 Prog 1837 sees the welcome return of John Wagner to the world of Dredd as he picks up the pieces from the devastating Day of Chaos epic. What better way to celebrate than with a cover by the Daddy of Detail, the Master of Minutia, Mr Chris Weston?

Chris has been kind enough to send his work in progress images and some words on his inspiration. Over to Chris...

"This picture was just one of those images that leapt into my head and gave no sign of leaving until I put it down on paper. First of all, I built a rough 3D model of the scene in Cinema 4D...." 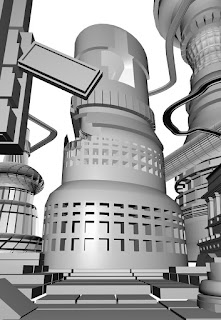 "I printed this out and traced it onto some thick watercolour paper. I wanted something with quite a rough texture as I wanted the city to look as beaten up as possible. I added in Judge Dredd, centre stage, and all the extraneous details for which I'm known..." 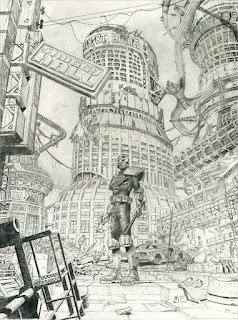 The name Albert Hughes instantly rang a bell so I asked Chris to elaborate...

"Albert Hughes Block was named after the director who employed me as a storyboard artist on "The Book of Eli" and the ill-fated live-action adaptation of "Akira". We've since worked together on another film called "Motor City" and the advertising campaign for "Crysis 3". I figured seeing as Albert has pretty much paid my mortgage for the last three years, the least I could do was immortalise him as a City-Block in the Big Meg!"

Check out the wonderful storyboards for Eli, Crysis and more on Chris' site, they're gob smacking!

"After I'd pencilled the picture, I mocked up a rough colour version and sent it to Tharg to see if he was interested in buying it. Luckily he was!" 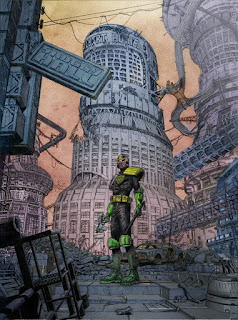 "So then it was a case of getting to work with my Acrylic inks. First I inked it, like an ordinary black and white page, except with the different coloured inks." 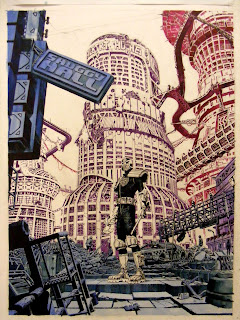 So You CAN beat Shuggy Hall?

"Then I began the laborious process of masking off sections of the art and airbrushing in the colours. It seemed to go quite well unto I started removing the masking film: it decided to take the top surface of the watercolour paper with it! I could have cried or screamed... or some combination of the two. Instead I just swore a lot and commenced the soul-destroying task of repairing the art; a job that took even longer than all the previous work I'd put in on the painting. It was tempting to scrap it and start again, but I refused to give in. By the end you'd never know anything had gone amiss, and I learnt a valuable lesson about masking on watercolour paper: basically wipe your masking tape over a thick woollen jumper before you stick it down onto the board. That way it picks up a few hairs and becomes less adhesive." 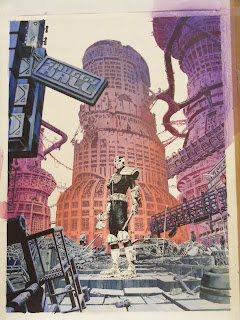 Dredd's looking a bit pale, hope it's not the Chaos virus...

'Details were added with my trusty coloursoft pencils, a technique I've ripped off from Drew Struzan.' 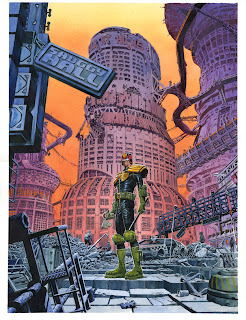 ﻿
If only Maria were around to help tidy up, waaagh!

'Once the painting was finished, I scanned the work with my beloved Epson GT-20000 A3 scanner and set about adjusting the levels and adding effects... a process I call "cheating".'

Trouble in the rubble.

'And that was that!  One last note, the oversize feet are a deliberate tribute to the one and only Mike McMahon.'
Wow, just beautiful, beautiful work as ever from Chris. This is another image that I'm sure we're going to see again and again. Thank you so much to Mr Weston for his time and effort, let's hope we see more from him soon!
Remember to check out his blog right here!
Posted by Pete Wells at 02:39