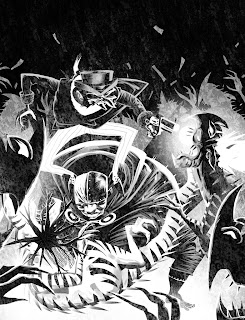 Welcome to a VERY special SERIES of 2000AD Covers Uncovered this week. The thrice crowned covers champion Matt 'D'Israeli' Brooker has produced a series of fantastic videos that show how this weeks' scrotnig cover went from twinkle in Tharg's eye to fully fleshed out battle scene!

The cover shows the rejuvenated Kingpin of Crime and his burly sidekick Black Bob, giving the old East End welcome to a sorry group of Sorries! I will be very proud to unveil a new video each day over the next three days chronicling each stage of this astounding image.

So, drum roll please as we unveil the first part of this M(att)-TV special. This video shows the very beginning of the process, with the design brief, initial designs and composition followed by digital pencilling and blocking out. Grab your popcorn, sit back, dim the lights and enjoy Part One of the Stickleback Trilogy...

Shine a light guv'nor, that was fascinating!

Matt has also included some elements from the videos for closer study, let's start with his sketchbook as he strives to find that 'strong composition...' 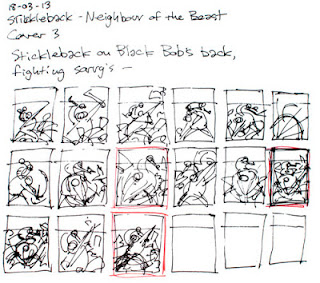 Below are the lucky winners... 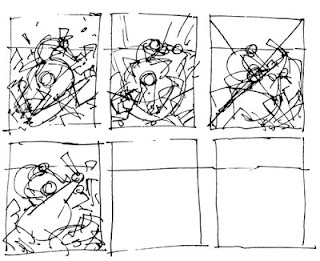 And here are those designs with their 'lines of force...' 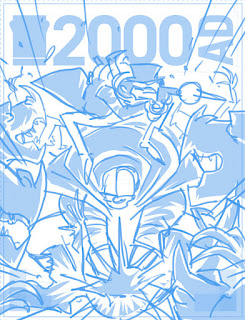 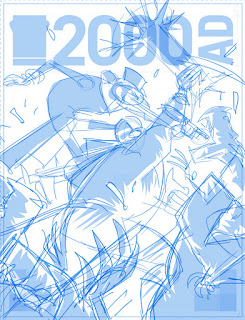 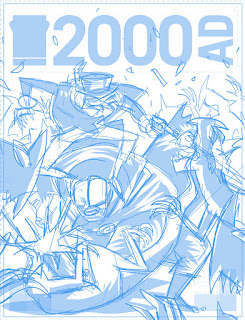 Not content with showing us a video of his work, Matt has sent 'clarifications and screen grabs' of the tool settings shown in the video AND a link to one of his Photoshop Actions! Back to Matt for yet more goodies...


'For this technique to work properly, your files want to be 400dpi resolution or greater; that's the minimum resolution at which hard-edged shapes print smoothly. Anything lower that 400dpi and you'll start to see the jagged individual pixels on the edges of curved shapes.'

'We need hard-edged shapes because we're going to use them to make selections. You can slightly blur the edges of shapes to get rid of the jaggies (this is called "anti-aliasing" and it's how computer monitors make curved edges look smooth), but the trouble with that is those blurred edges are very difficult to select - you always end up with an odd, rough edge when you try to grab them with the Magic Wand Tool or fill them with the Paint Bucket tool...' 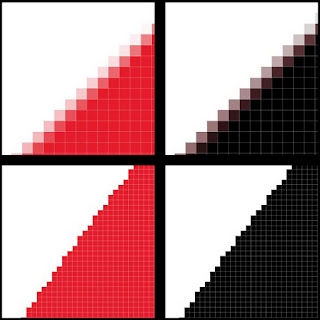 'Look at the image above, in the top left we see an extreme close up of an anti-aliased edge, showing the slight blurring that hides the pixel stepping. The top right shows what happens when the shape is filled with black, a rim of untouched pixels is left behind. The images on the bottom left and right show a hard edge will fill perfectly, but it will look jagged at resolutions lower than 400dpi.'

'By the same token, you want to make sure that Anti-Aliasing is switched off for the Lasso Tool when you're making your selections. Here are screen grabs showing the controls and correct settings for the Lasso Tool in Photoshop CS5, Manga Studio 4 (EX and Debut), Manga Studio 5 and Corel Painter 11. In each case I've circled the Lasso Tool in the toolbar of the relevant program, then underlined the controls that affect Anti-Aliasing. Note that you want ALL the settings to look the same as the ones in the following screen grabs.' 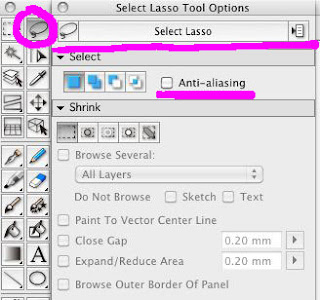 'In all the programs mentioned here, you can fill a selection by going to the Edit Menu and selecting "Fill…", but Photoshop and other programs have shortcuts that save you diving into the menu.;

'Adobe Photoshop: shift+f5 function key - this gets you a dialog box with lots of options like whether you want to fill using the foreground or background colour. That's great, but it takes another keystroke to actually do the fill. This Photoshop Action fills the selection with the foreground colour in one go by pressing the f9 function key. To load the action, open your Actions Menu (Window: Actions if its not visible), hit the little triangle top right of the menu (1) and pick Load Actions… (2)from the drop-down list (see illustration below).' 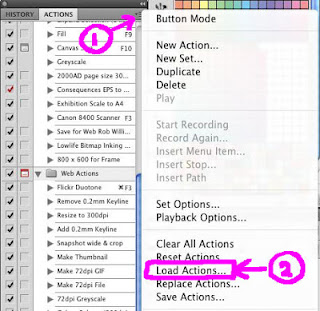 'Adobe Photoshop Elements: No shortcut built-in - once you've made your selection go Edit: Fill Selection. If you're using Photoshop Elements 11, you can also load the Photoshop Action from the link above. (Consult your help file on how to load Actions.)'

'Manga Studio 5 has a really useful "Lasso Fill" tool which automatically fills with colour as soon as you close the selection. For some stupid reason this is buried in a deeply-hidden sub-menu completely separate from the ordinary Lasso Tool. To find it, click on the third tool up from the bottom in the toolbar (the icon may well look like a set-square, an oblique line even a little set of comic panels, depending which sub-option was last selected). Click on the left-hand tab at the top ("Direct Draw") and the Lasso Fill will be the fifth one down the list of options that appears. See the illustration below for a better idea what to look for.' 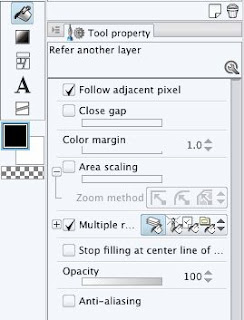 Phew! All you budding digital artists out there should now be able to pencil and fill as well as D'Israeli with no problems!

So, will Stickleback and Black Bob be beaten by the shameful Sorries? Will D'Israeli get the textures done in time?  Will Sorries be the hardest wyrms to slay? Find out tomorrow... same Matt Time, same Matt Channel!

Next episode - Adding textures with your D'lectable host, D'Israeli... 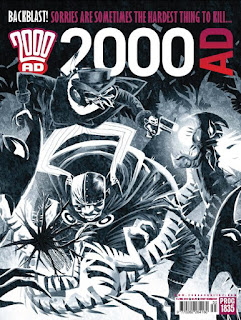