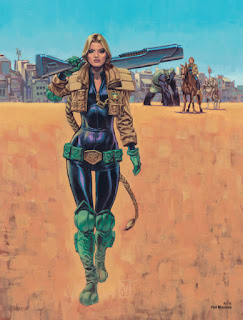 Megazine 363 sees us once again venture to the dangerous township of Badrock where Colonial Marshal Meta Lawson dispenses her own special brand of justice! Tharg the benevolent has spoiled his loyal squaxx this month by treating us to not only an incredible cover by series artist Phil Winslade, but also a bonus Star Scan too! If I know Tharg, there'll have been no extra oil rations either... 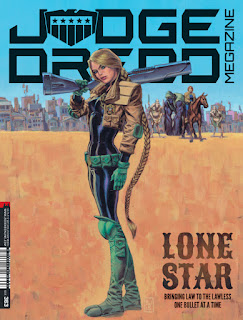 ﻿
Living in this age of digital art, I'd assumed the images were composites, the two figures digitally inserted onto a separate, single painted background image. However, closer analysis of the images showed that these were indeed two separate paintings. I asked Phil to tell me more... ﻿
"It was really tricky; I wanted to do both images as I wasn't sure which was going to turn out the most successful. I figured they could use the spare in a collection or some such."
Below we have Phil's initial sketches for the two images... 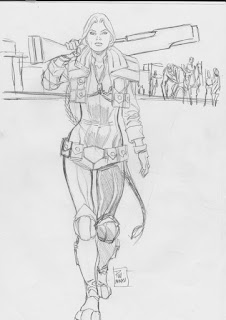 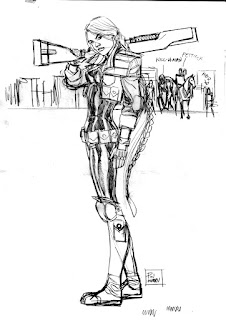 Aaaagh, Meta, there's a facehugger crawling up your back!
And here are the images tightened up. These are his cartoons, onto which he will paint... 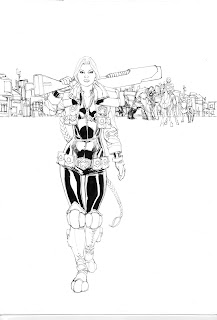 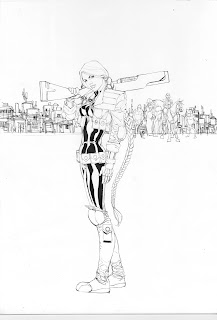 Phil continues, "Here is the cartoon with rough colour washes so that when I paint in detail I know what colours it'll be against..." 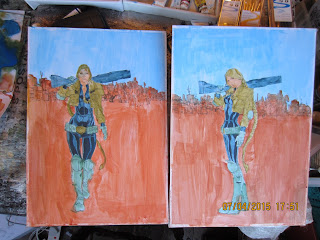 ﻿
"If there is a bright centre to the universe, you're on the planet that it's farthest from..."
"And here I am beginning to work on the figure details..." 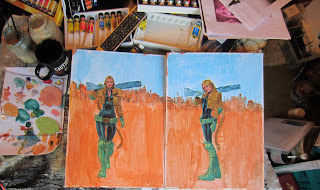 ﻿
Obviously, the text on Phil's cup is referring to his artwork...
"And here are most of the figures done..."
﻿ 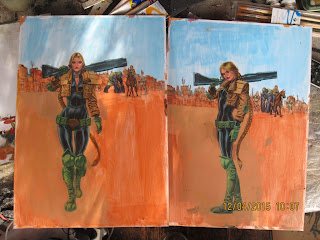 An ordered desk shows an ordered mind Mr Winslade!
Ever the perfectionist, Phil says "Personally, I wish I got the faces a little better because, as always, scanning presented a few hassles as the scanner doesn't like turquoise or any sort of greeny blue. The editing work on PS after scanning was a real bitch on those two as most of the colours went all over the place. I may have overused the black a bit and then they changed the logo so I had no real idea how they turn out as covers!"

I don't think Phil needed to worry! The artist is obviously having a ball with Lawless and it shows in his amazing work in the actial strip. He says "I wouldn't swap it for the world, I love drawing for Lawless and Matt and Rebellion have been terrific giving me enough freedom to hang myself. I love where Dan is taking the story and it's turning out to be a complete peach of a job, I just hope that comes through and people get on board."
I think people certainly are on board as Lawless is quickly becoming one of the Meg's most popular strips. Huge thanks to Phil for sending the images and breakdowns, absolutely stunning work as ever!
Posted by Pete Wells at 04:03