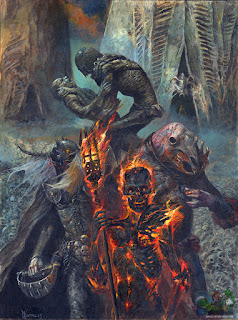 ﻿
Good Grud! An absolutely terrifying cover for Dreams of Deadworld by the master of horror, Mr Dave Kendall! This collection of terrifying tales have a fascinating origin, with Dave actually having a twisted dream of Judge Death and co and painting his nightmarish visions. Hmmmm, I wonder if Death is trying to invade our dimension? You can see those visions below, however they come with a warning - they're absolutely horrible! 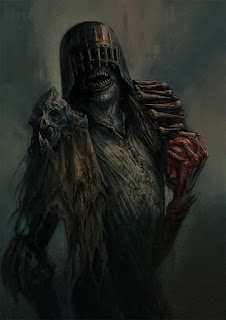 Ssssssydney's Valentine present could have been a little more subtle... 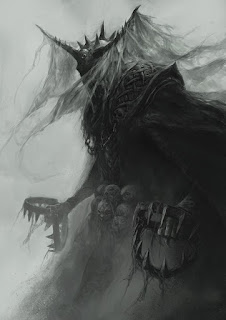 Fear dancing to the Birdie Song... 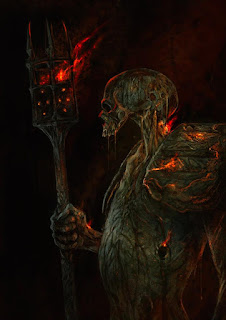 When Fire found out he was getting his own strip, his jaw literally dropped! 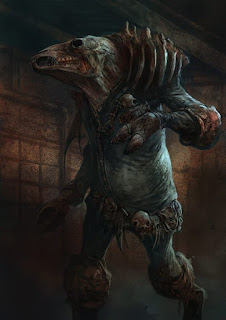 ﻿Old Mortis is putting the weight on...

Over to Dave, to tell us about the cover. He says "I'm really excited to be doing this series! A bit daunting as Dark Justice was just incredible, however I was aiming for a completely different look from Greg's amazing work. Rather than a cinematic experience, I've tried to evoke a sense of the lunacy of Kev O'Neill and the Nemesis strip. All strange settings and creepy beasts! Not to go over the story again too much, but these versions of the Dark Judges were based upon a pretty creepy Dark Judge invasion dream that I was lucky enough to remember!" (Unlickily enough I'd say! - Pete)

"With this first cover I was adamant I wasn't going to have Death physically on the cover front and centre. That's saved for another prog, but I definitely wanted to get the iconic statue of Death killing the last inhabitant of Deadworld from 'Death Lives'. I couldn't get it into the strip so went for this first cover. It nails the series firmly in time and place."

Here is that statue, a lovely little detail in a classic strip! 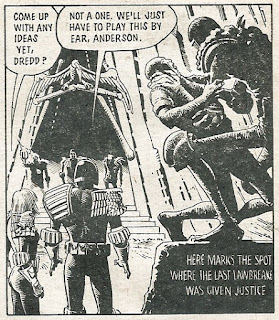 ﻿Ironically, the spot was just at the front of the queue at the post office.﻿

"Because of the inclusion of the statue, I was limiting myself compositionally. The statue had to be above the other 3 Judges and that gave me few options but a triangular composition. So I first did small tiny very, very rough thumbnails. These were just scribbles trying out concepts." 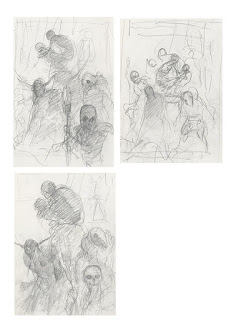 "I followed this up with a more considered rough..." 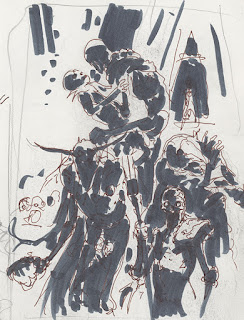 "Which laid the grounds for the final pencils." 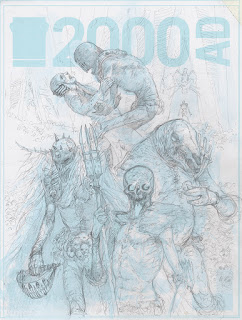 ﻿If you look carefully, you can see Death's Mum at the door shouting "Tea's ready boys!"﻿

"Then a quick colour rough. This was darker and more monochromatic than the final cover but I was trying to nail the atmosphere. This was approved by Tharg!" 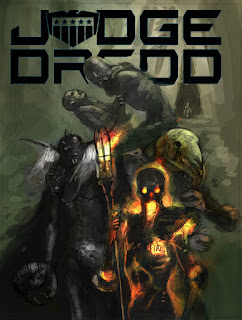 ﻿Poor Fire has a devil of a time finding decent deodorant  ﻿

"I am painting these covers traditionally. A good friend and collector had already nabbed them up even before I'd started. I did a little bit of work deciding lighting digitally. This was the image I transferred to board for final paints." 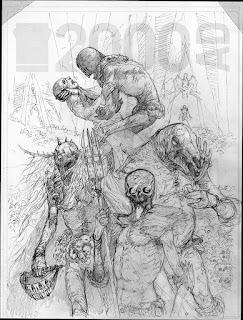 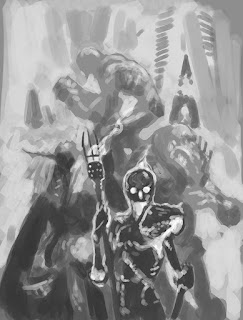 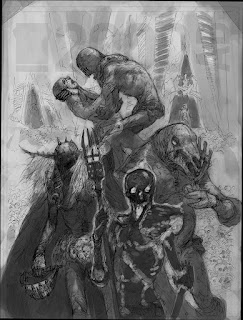 ﻿As if the nasty buggers weren't dark enough!﻿

"It was then a case of painting it. It ended up being a little more colourful than I initially intended. I think I'd already decided on the Death cover colour scheme so wanted a different feel to the first cover." What a tease! Can't wait to see that Death cover!

﻿This year's Christmas card from Death and Co.﻿

And here's how the cover looks on your weekly dose of thrillpower! 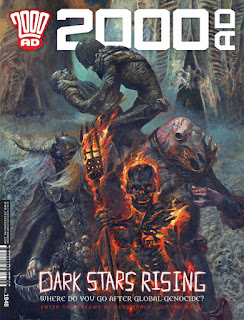 And as if that wasn't enough, Dave was kind enough to send a bonus! He included the making of his Tales of Telguuth graphic novel cover from earlier this year, a story close to Dave's heart. He says "I was asked on the back of the Aquila cover to produce the cover for the collection of Tales of Telguuth by Steve Moore and various artists. One of those stories was the first work I ever did for 2000ad." I'm sure readers will remember that Steve sadly died in March last year so it's lovely that we have a collection of his quirky stories to commemorate him with.

Dave says "I had two alternatives. A montage style cover featuring a number of story images or a single image shot..." 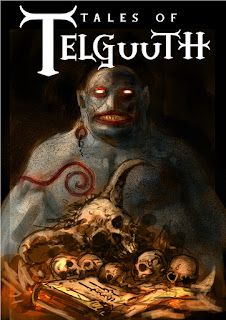 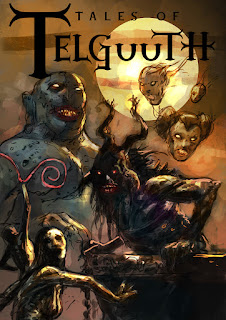 "Both of them feature the fantastic stone giant Dean Ormston painted for one of the 'Bride of Ballakruz Krimm.' This giant blew me away in it's simplicity and power."

A difficult choice, which I'm pleased I didn't have to make! Dave said "Pye Parr made the final decision and went for the single shot of giant with handfuls of bloody stories and skulls."

Below are Dave's exquisite pencils... 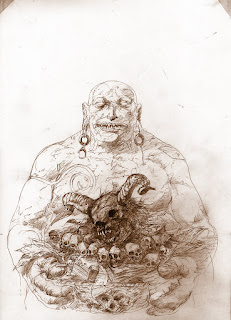 Heston Blumenthal had gone too far this time... 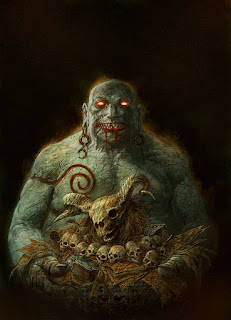 The thing with internet dating is people never look like their photo...
Amazing stuff!﻿ Thank you soooo much to Dave for sending the images, we are promised a Death cover in the next four weeks and I for one can't wait! Check out more of Dave's nightmarish art over on his excellent site!
﻿
Posted by Pete Wells at 08:56