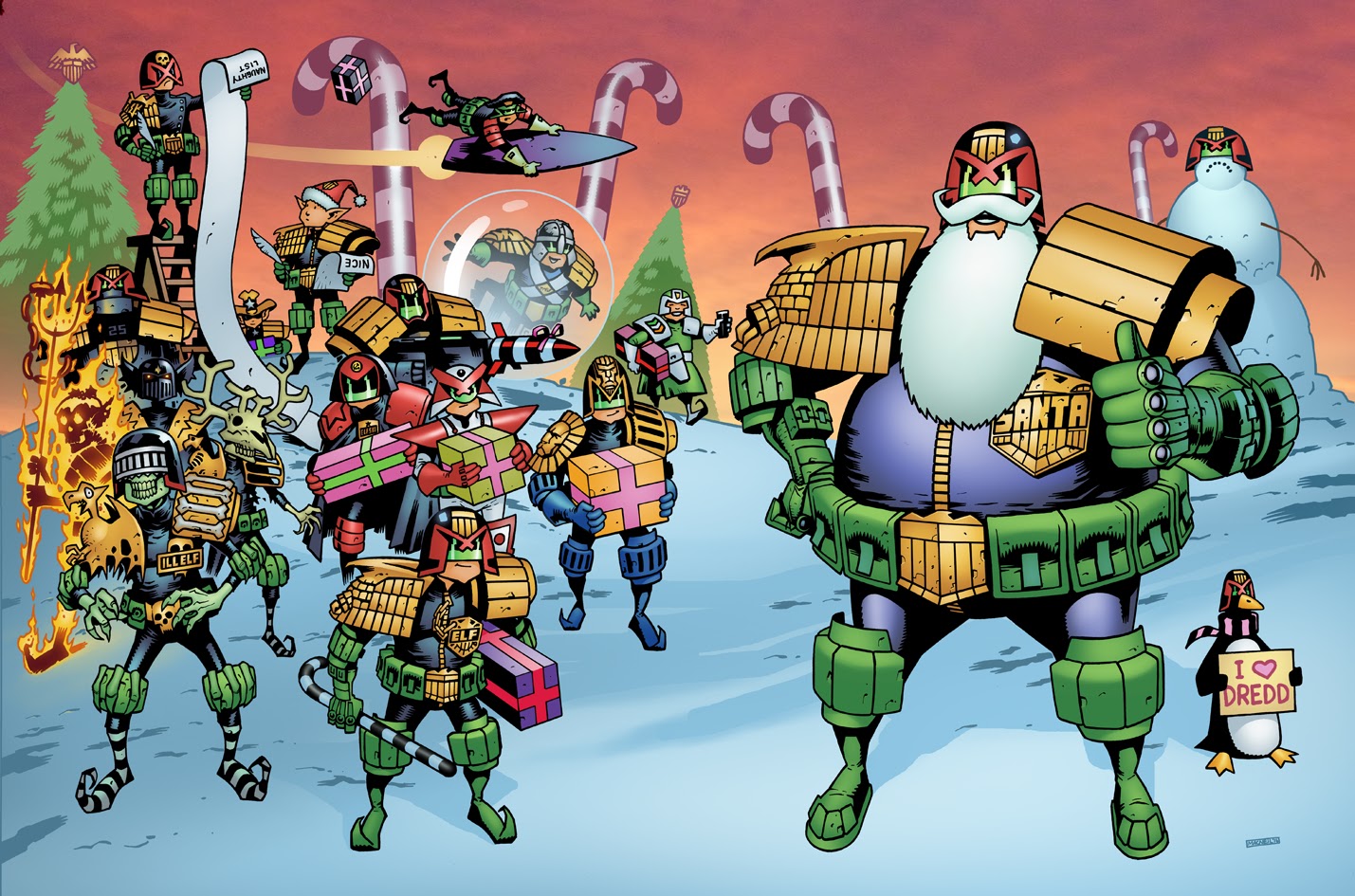 Christmas Eve!!! As the jolly fat man prepares to come to your house tonight (well, some of you, others have been waaay too naughty!) he thought he'd visit the covers blog first! There's a bit of a tradition of the mighty Colin MacNeil providing Christmas covers which we will celebrate on this special day!

Over to Colin to tell us how this year's joyful Magazine image came to be:

"I spent ages trying to come up with a new idea for the xmas cover. I had a look at the ones that had been done over the years and well, pretty much everything has been done already. Y'know... Dredd with sack of toys, various ones with Dredd and Santa, a perp throwing snowballs at Dredd, etc. It was getting kind of tough trying to come up with something new. Then, I thought, what about Santa as a Judge? Don't think that's been done before. Obviously as soon as I got that, the elves started to appear. ... and of course they had to be judges too, but judges from around the world!"

With the idea in place, Colin produced these fantastic pencils, crikey there's some work gone into those... 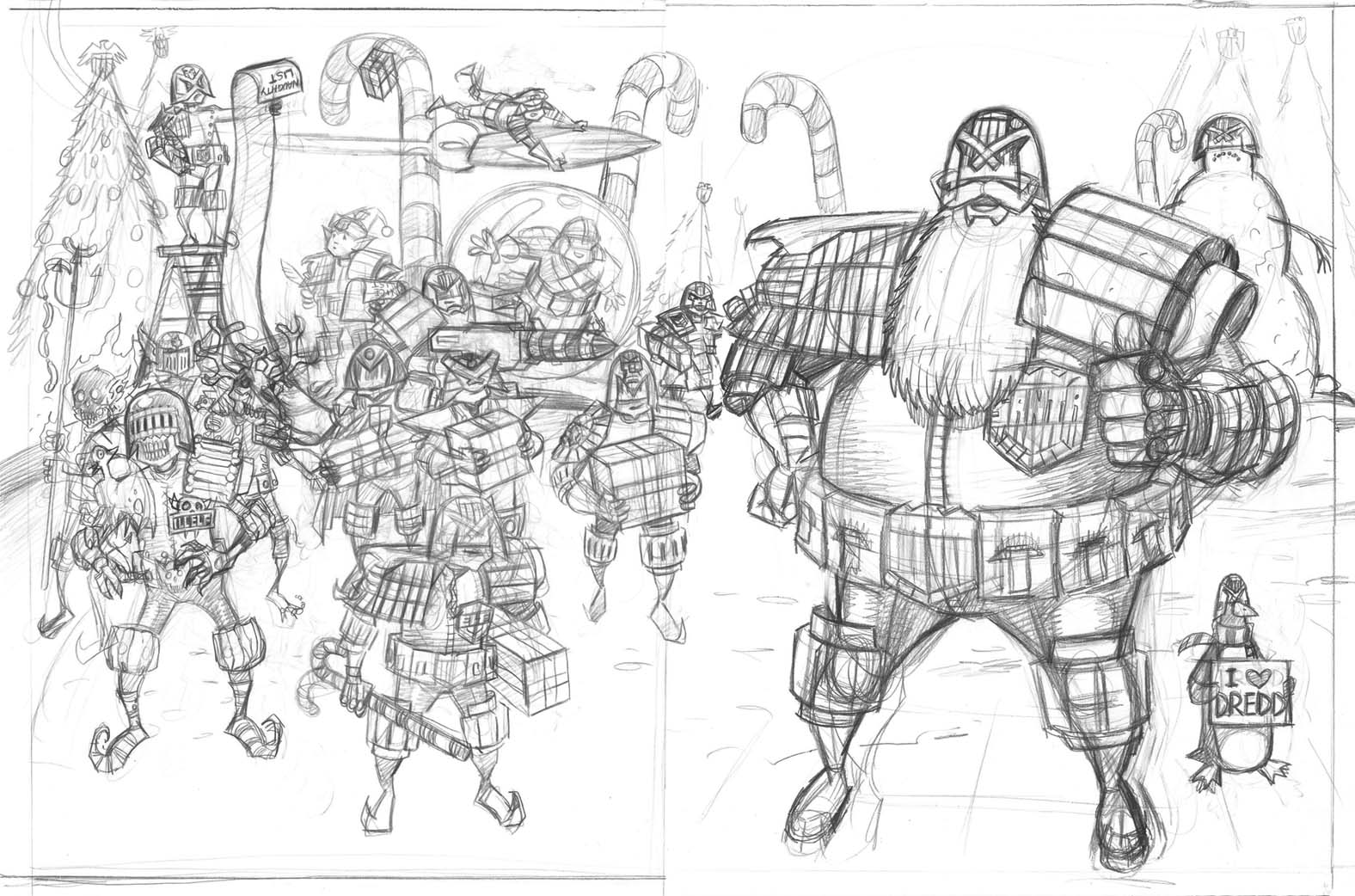 "I had lots of fun with the elves. Ill Elf instead of Death, Mortis with reindeer antlers, an SJS elf with a huge naughty list and a tiny nice list, etc." 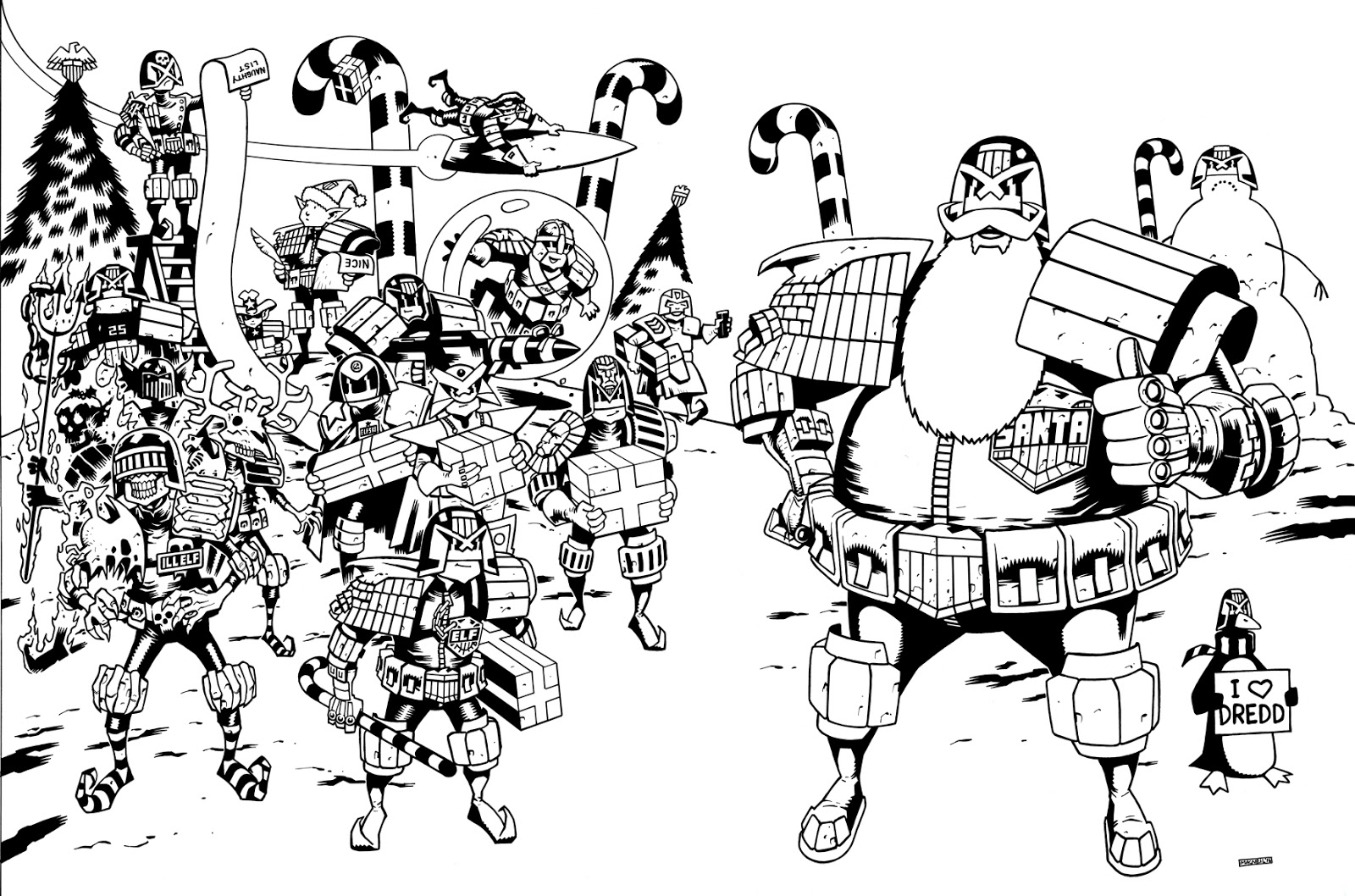 You should see the Law Slayer
﻿
"In relation to the penguin, I drew that because I needed something to fill the space next to Santa and well, it seemed a fun thing to do. I likes penguins.  It was only later I discovered there actually was a real Dredd penguin. A happy coincidence indeed!" The covers blog HIGHLY recommends the Blind Mouse Toys Cosplay Dredd Penguin, it shouldn't work, but dammit it does!

Here are Colin's glorious colours - I love how Fire is a flaming Christmas pud!

Santa's Laws are coming to town!
﻿
"Oh, originally this was just going to be a single page cover, but then as the elves appeared it evolved in to a wraparound. Happily Tharg liked the idea, so a wraparound it was for Xmas. :)﻿"

Good old Tharg, I suspect that was an Ebenezer Scrooge type moment in the Nerve Centre...

As mentioned previously, Colin has provided a few festive covers in the past, perhaps his big, white beard sends a subliminal message to Tharg? Let us celebrate those covers, firstly, the beautiful cover of Prog 815. As Dredd and Christmas are pretty much my two favourite things, I'm lucky enough to own the artwork for this cover... 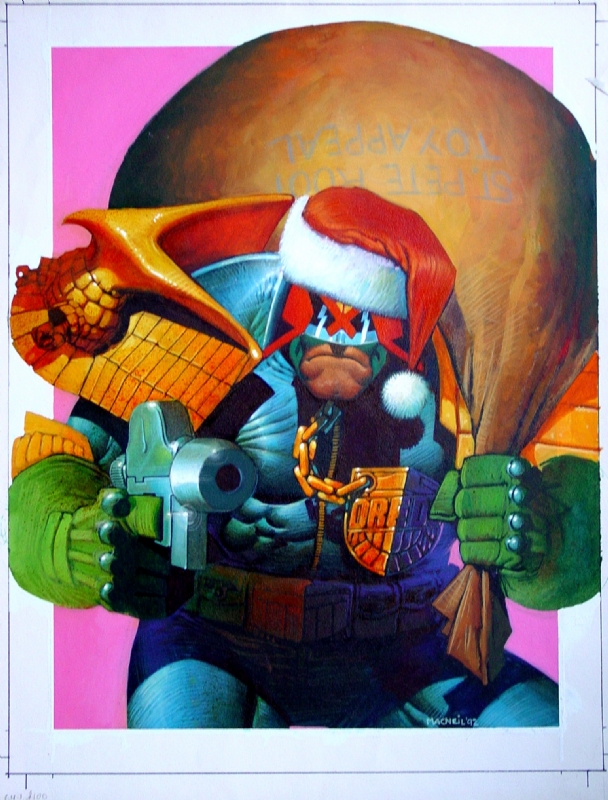 He's gonna find out who's naughty and nice...﻿ 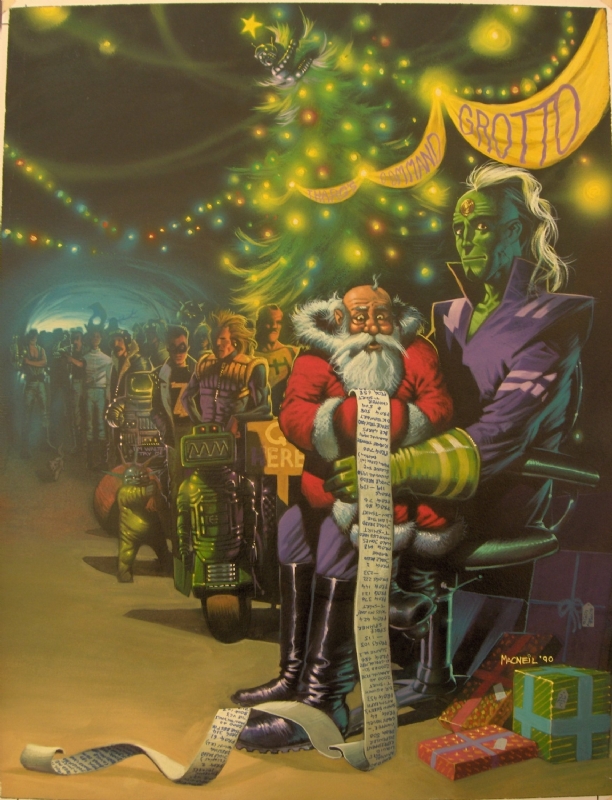 I wonder if there's a KTT on that list? 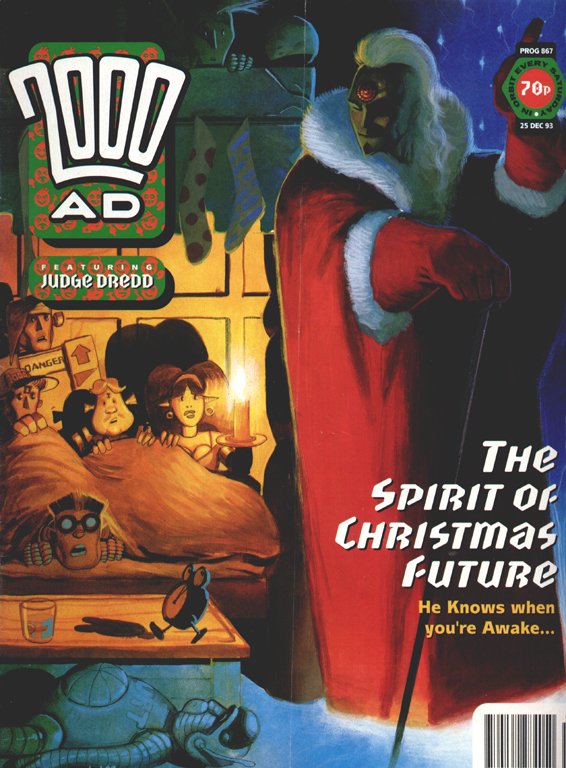 Why is Roxilla/Cyb-Aud in bed with all those droids?

Colin can often be relied upon to support the 2000AD Message Board Advent Calendar on Christmas Eve. Below is his brilliant Dark Judges image from 2009... 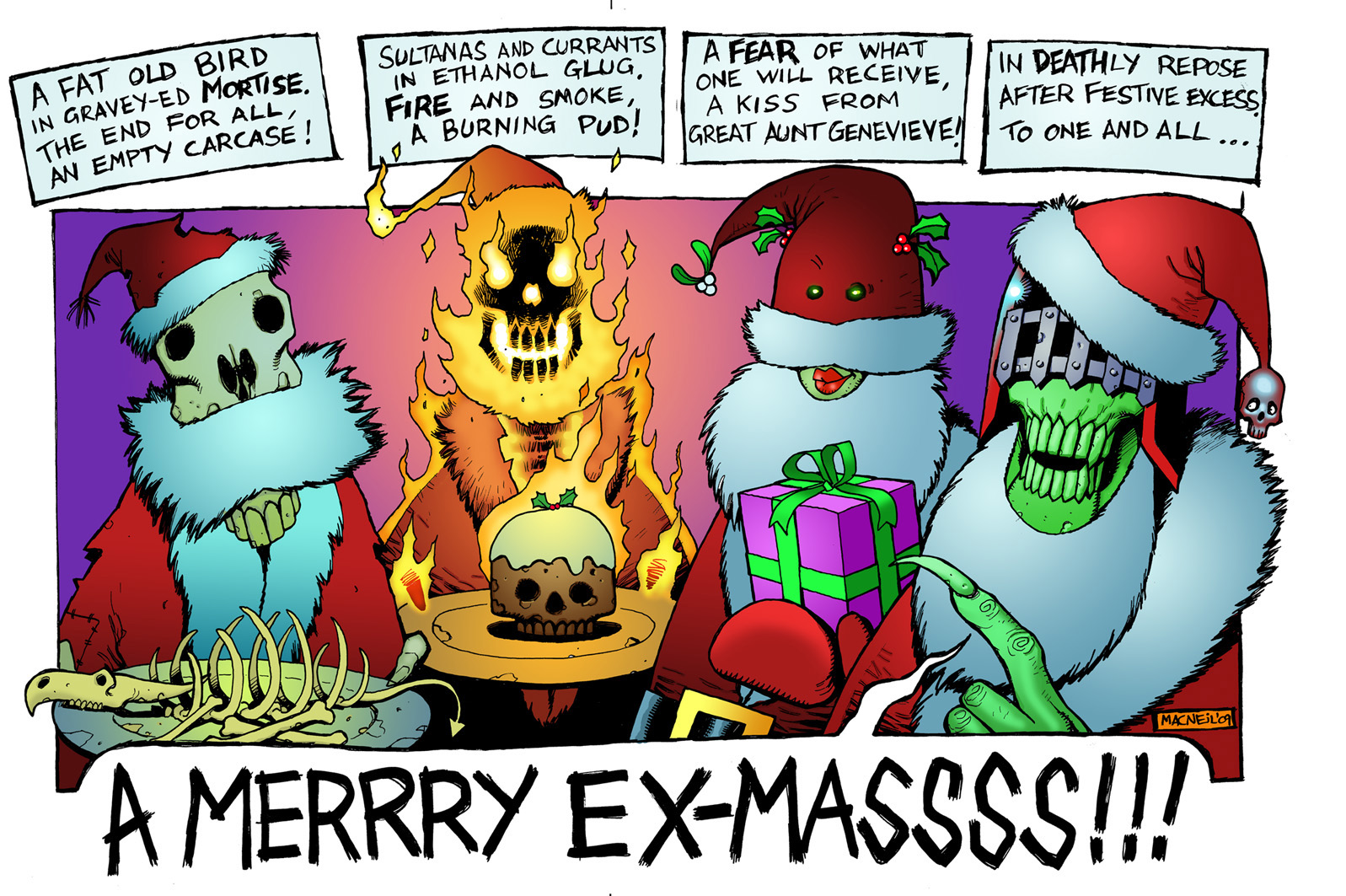 How does Colin know my Great Aunt Genevieve? 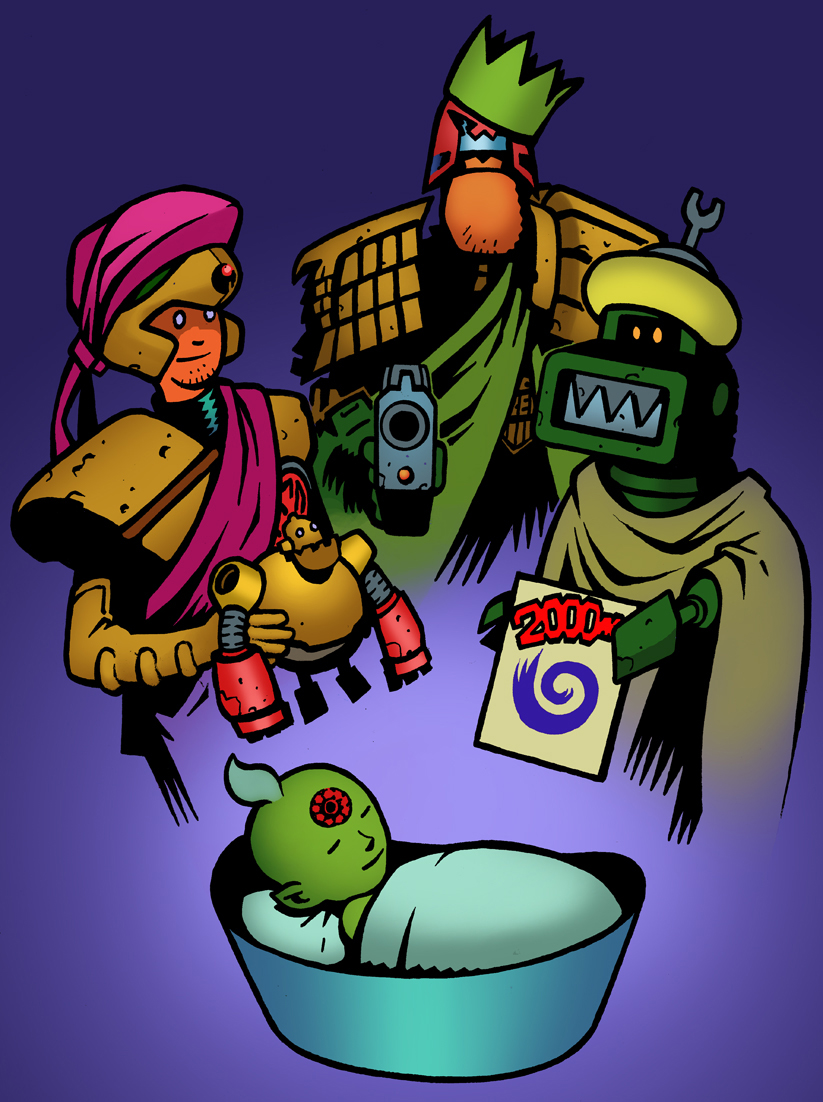 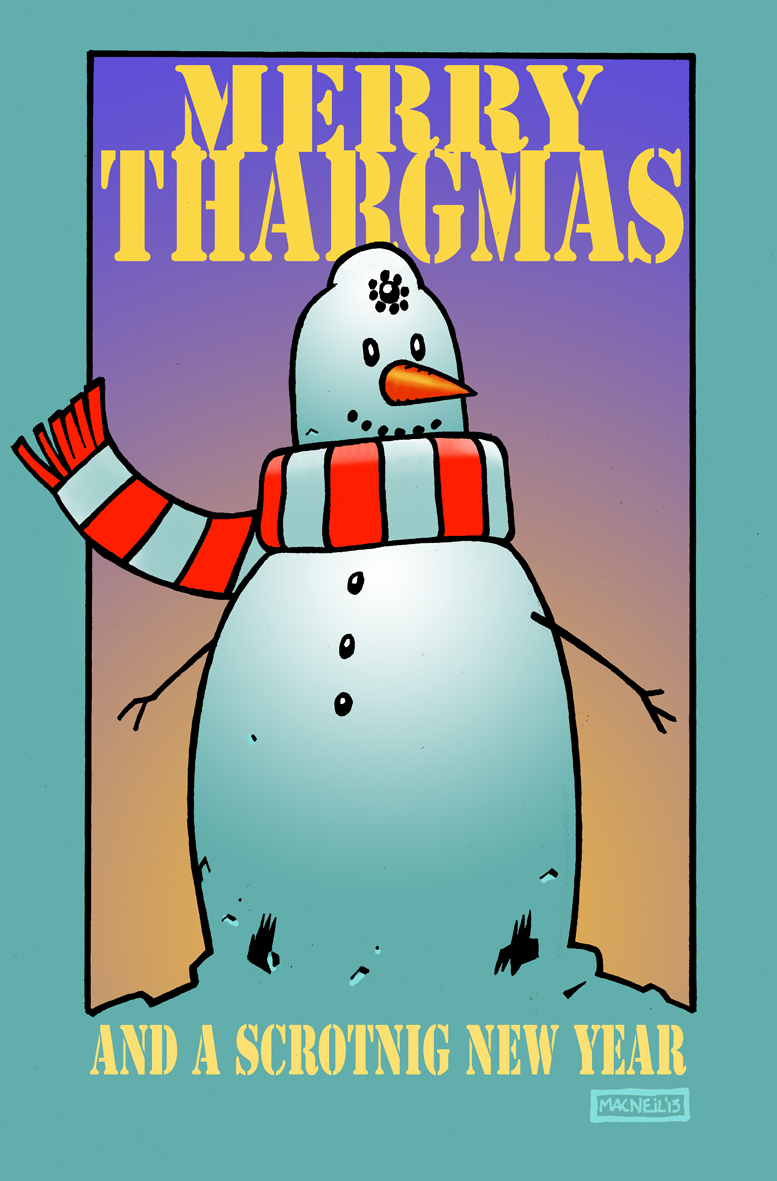 Tomorrow: Christmas Day! The first cover of 2015 will be unleashed!
Posted by Pete Wells at 16:47