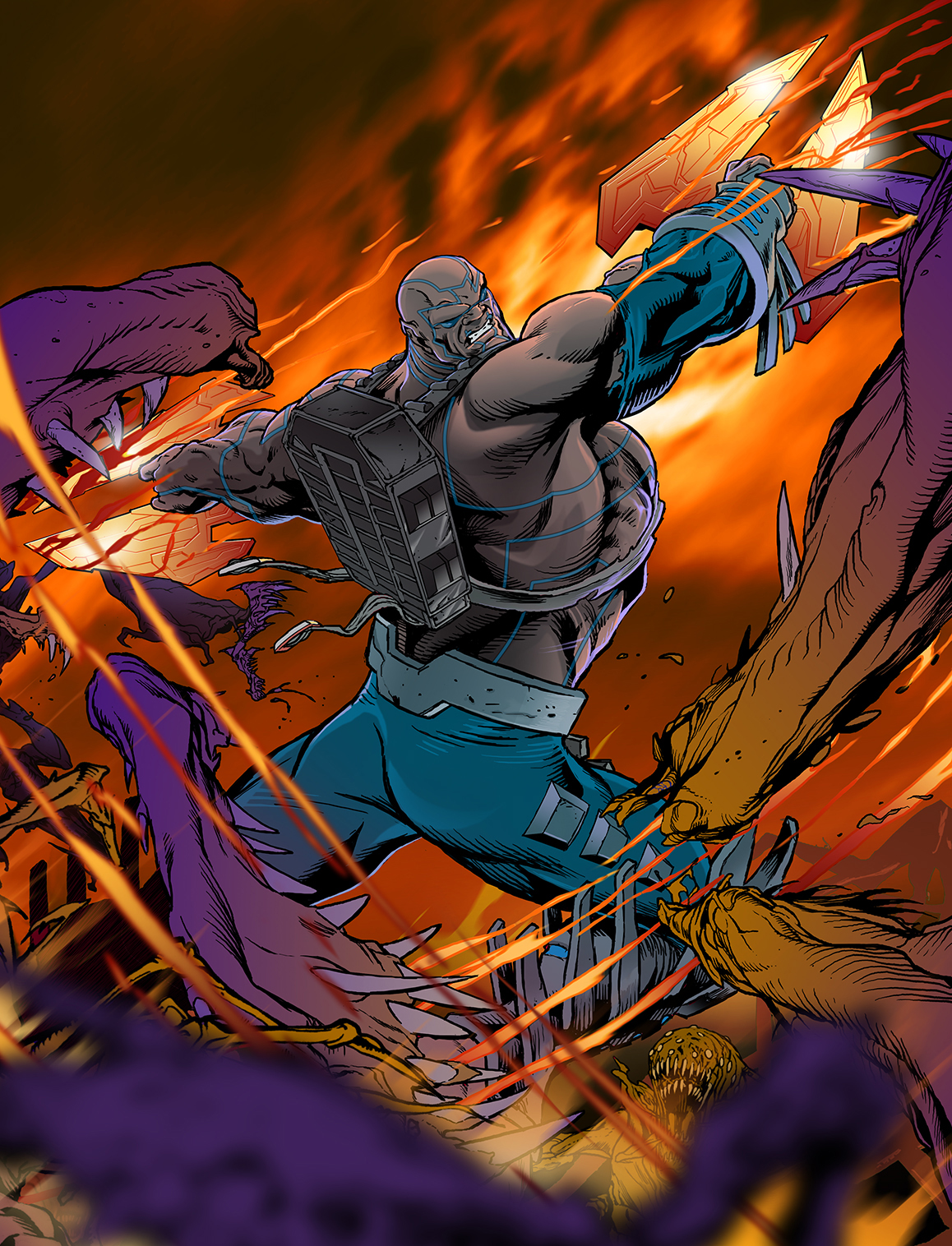 With the comic world still reeling and receiving collective therapy over Milo Manara's gratuitous Spider-Girl's arsehole cover, Richard Elson has decided to blacken the good name of our beloved 2000AD by cheese-caking none other than Gene the Hackman! His brain is full of wrong!

I'm sure you'll join me in moral outrage and righteous indignation at the cover which features Gene gyrating his beautifully pert buttocks at the reader. Let us fill social media with post after post showing how upset we are at his tasteless, yet beautifully perky sideboob. Hybrid human/canines DO NOT fight in that pose and I for one am sick of them being depicted in such a way in comics. Will nobody think of the puppies!?! (By puppies, I mean youngsters, and not Gene's heaving, bouncing chest.)

For the good of society, I confronted Mr Elson and asked him to jolly well explain himself. He said "Tharg asked for a 'Gene piling into Them' cover image for the third part of the latest Kingdom outing. I provided four initial sketches, none of which were exactly what Tharg was looking for..." Oh yeah, blame the Mighty One... 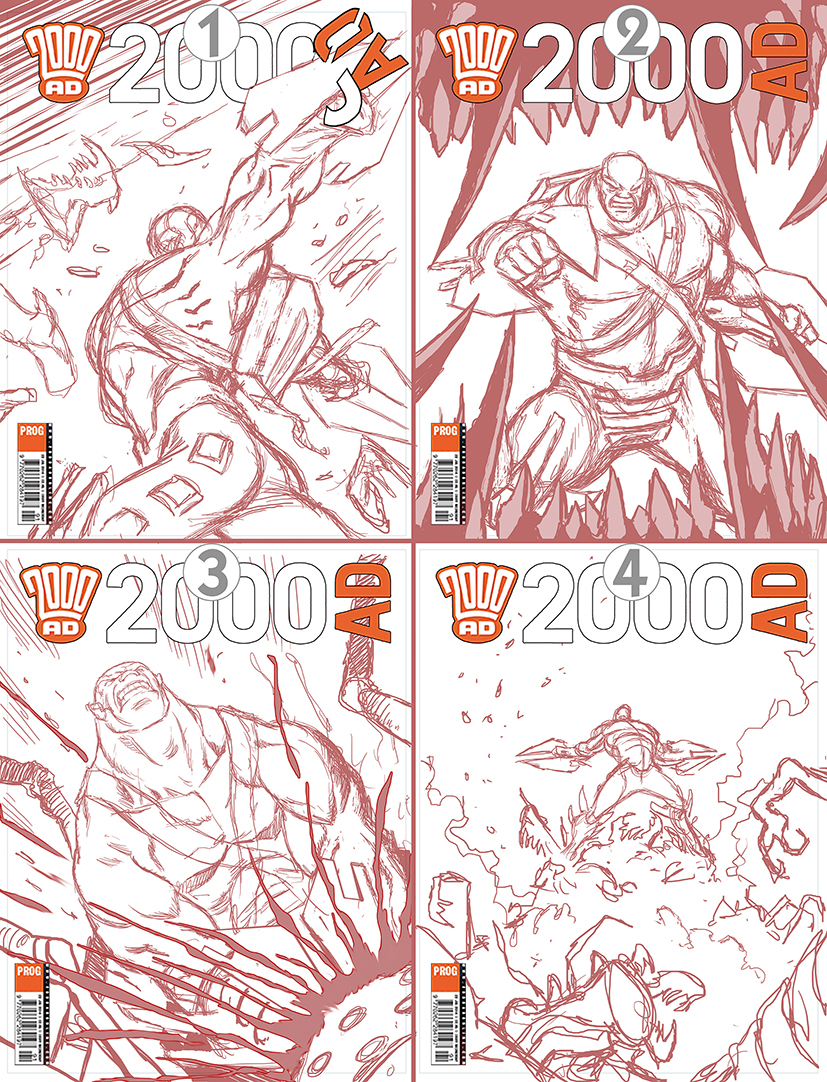 Boobs, crotch, splooge and gape - when will this madness end?

"I was asked to do something close to the feel of sketch one but with Gene facing toward the viewer, rather than sideways. I submitted a revised sketch, which was approved." 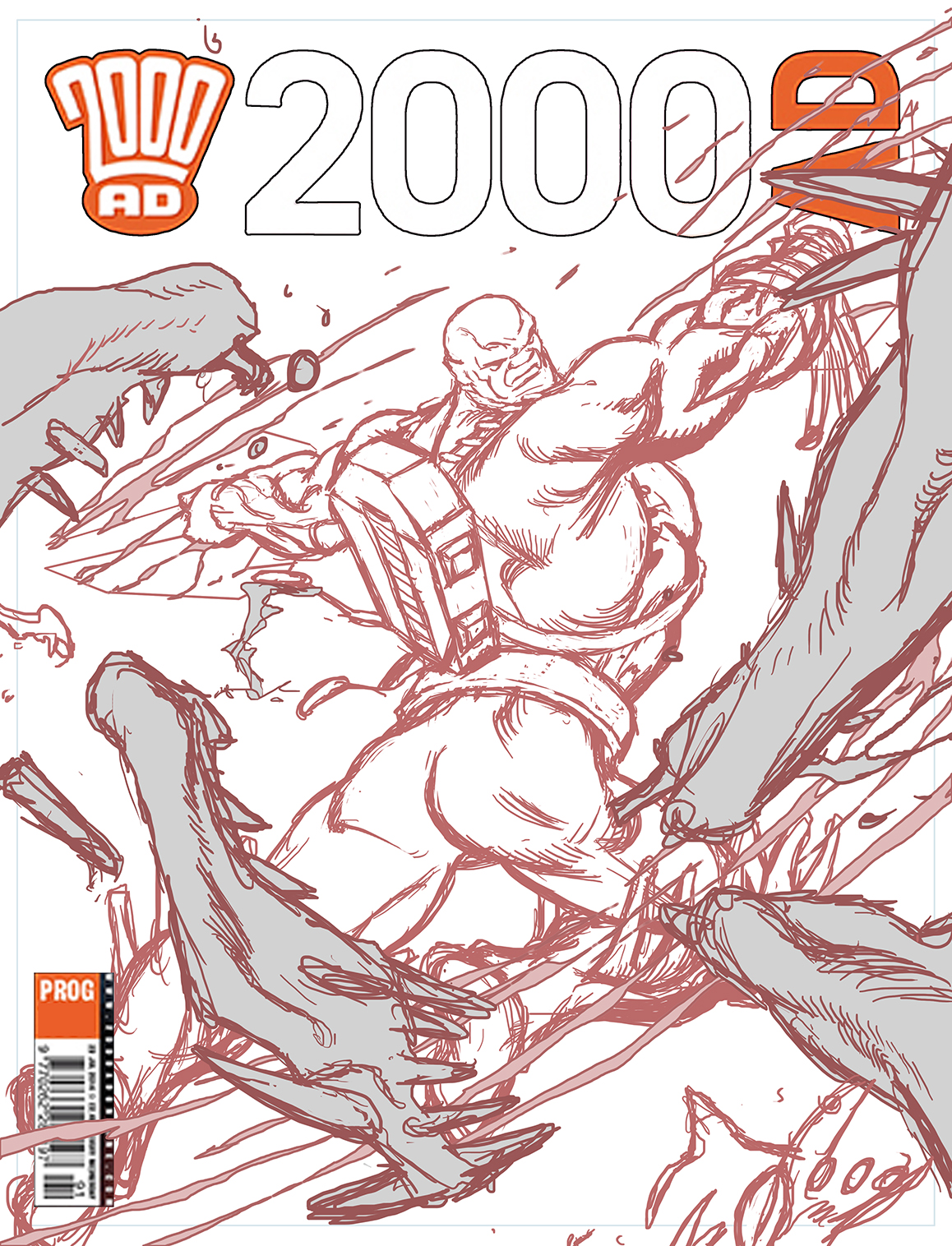 "I enlarge my roughs and ink straight over them. I try to avoid a detailed, intermediate pencil stage as, although it is an opportunity to refine the drawing/anatomy, it also tends to remove the kinetic quality of the figures and that’s what I’m primarily interested in. When I came to ink up this sketch something felt wrong. I realised that I had inadvertently drawn a Gene the Hackman ass shot. Probably a bit too balletic for Gene; raw, devastating power is the quality I’m looking for. The guy is a human/bullmastiff genetic hybrid that weighs as much as a 4x4 and is the size of a fuckin’ polar bear; there’s very little room for grace in his fighting technique. I redrew the lower half of Gene’s body, reversing the tilt of his hips, to try and better convey the brutality of his blows."

Ah yes, the old I didn't realise until it was too late excuse... 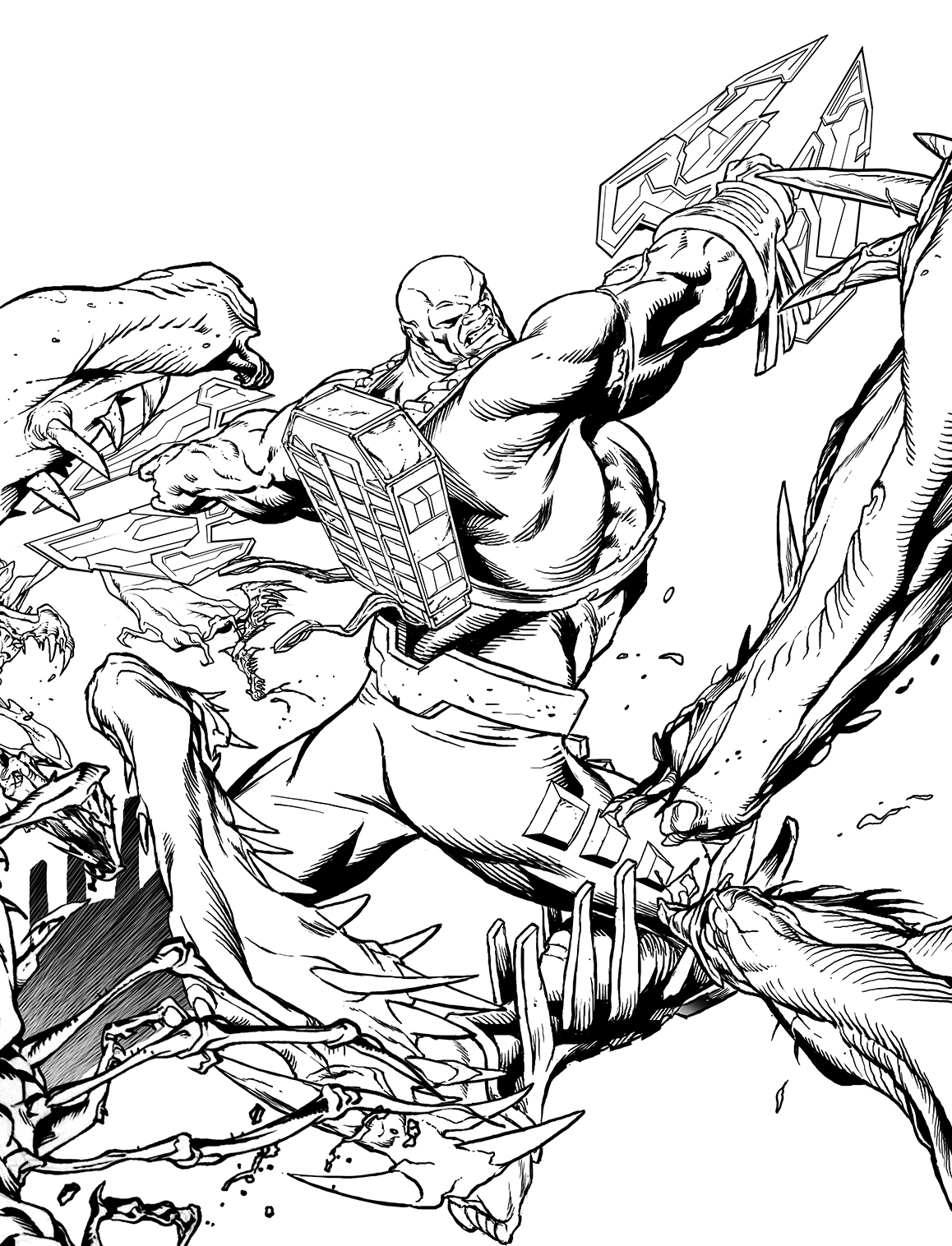 Richard was lucky enough... I mean, had the downright audacity to colour Gene's muscular glutes himself... "For the colour stage I used a bit of a hybrid technique. I usually have two distinct methods of colouring: one involves a lot of layers, the other involves very few layers but a lot of channels. With both of these methods I put the colour layers below the inks layer, with most of the colour layers set to ‘normal.' I decided to try a combination of the two on this job and also colour above the inks layer with most of the colour layers set to ‘multiply’. I ended up with an overly complex mess on both palettes (I’ve enclosed a screenshot) and managed to slightly confuse myself in the process! I don’t suppose any of this will make sense to anybody who doesn’t colour in Photoshop, but I can’t be bothered to explain it in any more detail. :)"

Twenty three layers would be enough to 'slightly confuse' anyone!

Below is the glorious finished image, Gene asserting himself from top to bottom with his fierce arsenal. Certainly not a bum note to be seen in this tush, I mean, lush cover...

Like a modern day Roger Cook, I confronted Mr Elson on his exploitation of poor Gene, he said "When I looked at the revised sketch again yesterday I realised that it is that classic 90’s comics T&A shot - as seen in a thousand drawings of female X-Men. Given some of the weird requests for sketches that I’ve received over the years, I’m sure that there is a market for Gene cheesecake out there somewhere; hopefully Dan and I won’t have to exploit that for a few years yet, but, now that you mention the Manara controversy, I am slightly concerned - those animal rights activists are nutters!"

Quite. Below is how the cover shamelessly looks in your local newsagent. I recommend you slip it into a copy of the Daily Mail before paying for it... 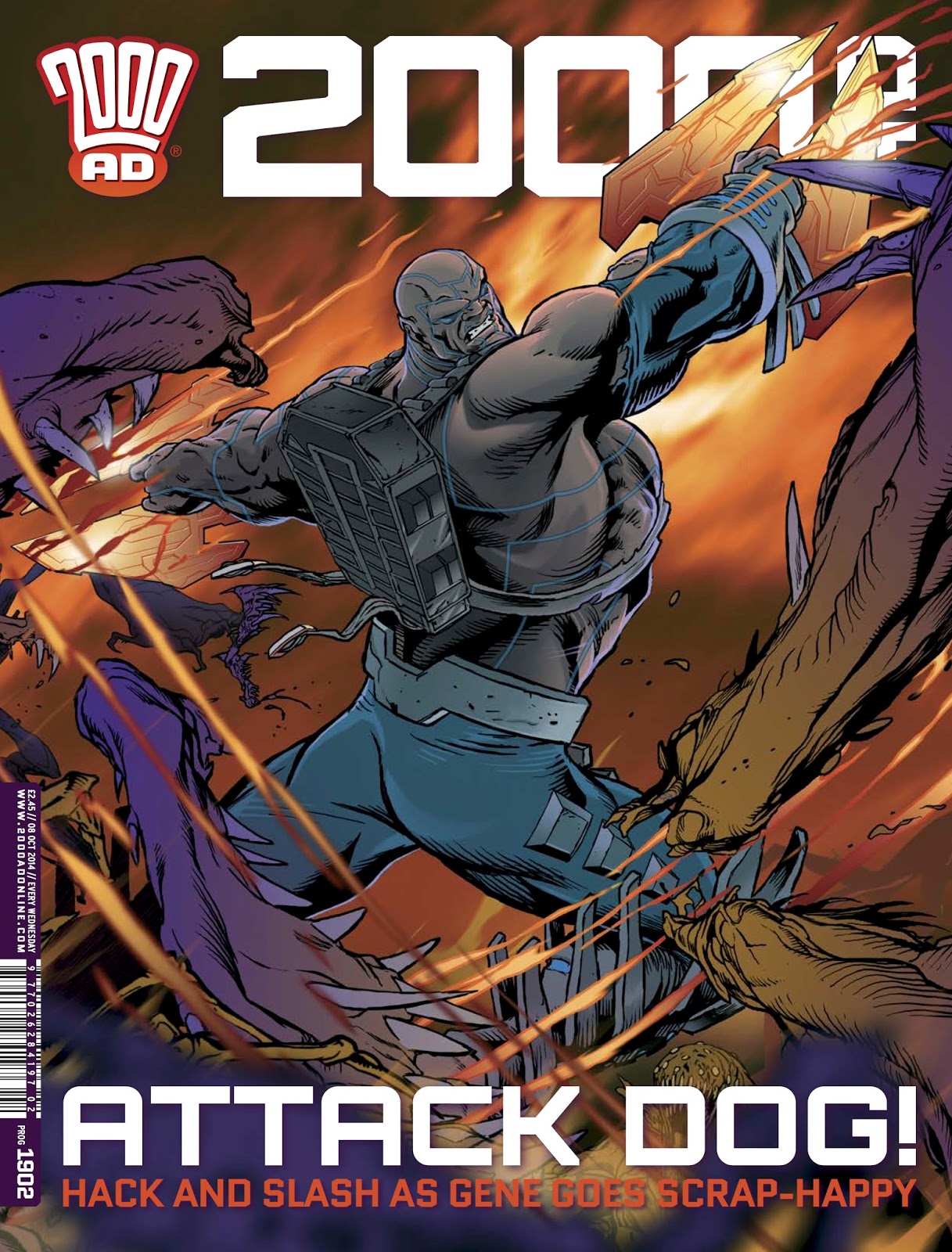 Thank you so much to Richard for sending the files which I have passed on to the police.
Posted by Pete Wells at 15:27