Mark Harrison - Pain in the Gas. 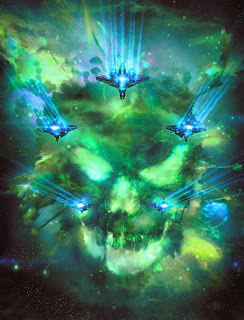 Mark Harrison treats us to one of the most sinister 2000AD covers of the year as the forces of Earth attack The Enemy planet!

"Tharg wanted the Earth ships converging on the Enemy gas planet so I did this mock up:" 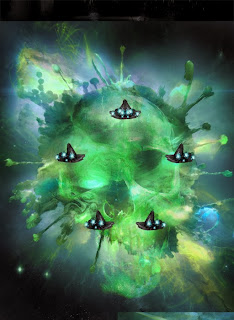 "I used existing artwork and just made up a formation, a pentangle of ships heading towards a  demonic planet. I originally conceived of the Enemy as a combination of virus and gas giant weather storm like the eye of Jupiter.  A "Supercell" (is that a pun?)" 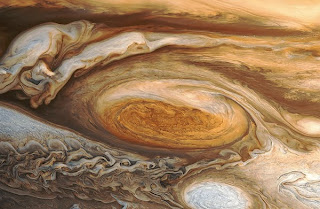 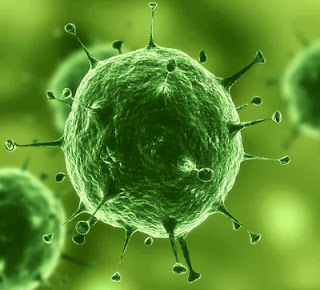 Mark gives us a virus, thanks 'mate.'

"Constantly boiling and churning, shooting off bits of itself, although on this scale it was more like solar flares taking hours to leave the surface where lightning storms raged in the glowing heart of the dark gaseous maelstrom."

"I wanted it to look like a violent and foreboding place and it was tricky to get the right sense of glow and darkness.  Worried it would print too dark as a cover I erred on the side of caution here and made it brighter that I would have liked." 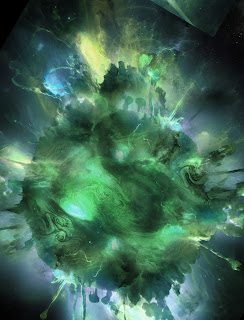 The contents of my arse after fizzy pop and beans

"But I was right to do so as it printed up pretty much as I wanted/expected with just a loss of range value in the shadows which is typical. I actually lighten the blacks just a tad, but darken towards the corners so the black borders of the strip should be the darkest part of the page."

"There should have been a ring of ships, like Saturn's rings around the planet and I did plan for them but it looked messy and bitty so I dropped them for a "clearer," simpler image of Enemy and ships."

"People may site a recent Dr who episode as inspiration for the skull face in the cloud/planet skull thing. It did consider it briefly, but I was going back further to Luc Besson's The 5th Element for my inspiration and "Mr Shadow" and the V'ger Cloud in Star Trek: The Motion Picture."

"Makes a connection with the reader, puts a  face to the enemy,  literally!"

And here's the final cover in all its' spooky glory!

Here's how the prog looked on your newsagent's shel... hey wait a minute, below is Mark's suggestion for the cover followed by PYE-01's official  version... 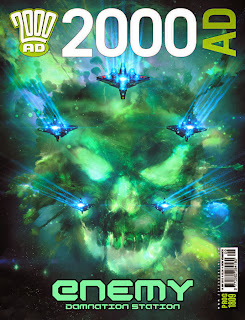 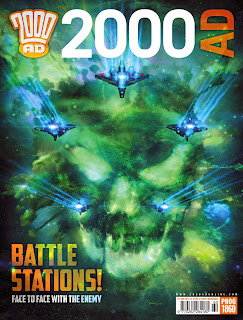 So a big tha- oh, not one to skimp on detail, Mark sent even more goodies from the strip!

"A sheet of spaceships used in the strip. Originally I was going to have the ships appear and move as vertical spires, like churches drifting  through space (more like tall ships). It would have been more original  but  it looked a bit directionless so that idea only made it into display screen graphics." 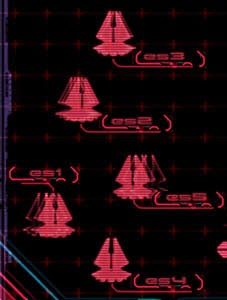 "The original enemy concept that was used in the strip. This has more of a solar flare feel about it, bursting and turning itself inside out. I experimented with different coloured internal gases, having a red gas on the inside , but that made the skull face look like a clown!"

"I did save the idea for the strip though when the Earth Ships head in to the enemy, the outer skin of green gases pulling apart to reveal a red interior." 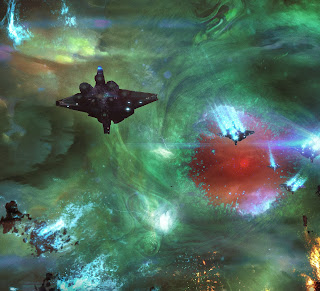 A bad case of PInkeye

"My toy child's skull which was originally day-glo colours bought form me by my dad from Ripley's "Believe-it-or-Not" on the Blackpool pleasure beach."

"Kids used to have great stuff like that back then; gruesome attractions like Ripley's "Believe-it-or-Not"  selling gore and freak show oddities and horror tales to impressionable minds amid the Dr Who and Gerry Anderson Space City Exhibitions of the 1970's that were on the seafront." 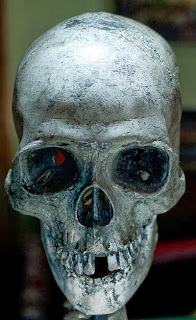 A guest appearance from Zombo

"I created a sheet of oil rigs and  ocean liners photographed  at night so only their lights were showing and made up mirrored images of them that I could use to drop on space ship silhouettes to give the impression of lighting." 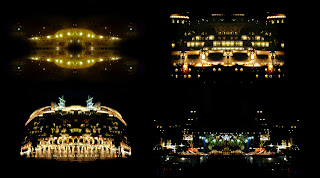 Some of Mark's cast collection of 'Oil Rig at Night' photos.
"The Earth Station symbol I came up with to suggest the human forces  was a deliberate nod to the Terminator's symbol in Nemesis the Warlock."

"So glad I don't have to paste, resize and distort that for every other panel! I'm taking it easier for the next strip!" 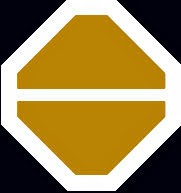 HUUUUUGE thanks to Mark for sending the bits and bobs for this weeks' cover and more, brilliant stuff as ever!
Posted by Pete Wells at 15:10