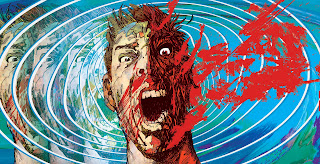 ﻿
Ooooh, Henry Flint isn't looking too well is he? Here's the final, Flesh-ripping standard prog cover of 2013 by the brilliant Henry Flint. Over to Henry to tell us more.

"In keeping with many self portraits in 2000ad over the years (artists using their own image for facial expressions mostly) thought I'd have a go. Tharg had the idea of doing a warning poster for the cover which hints back to old progs. Wanted the same feel as those 1970’s Rabies posters up around Customs & Excise houses. Living by the sea back then put a sinister edge to the sea side, ice-cream, buckets and spades and violent death."

Yep, got to agree with Henry there, as a kid growing up in the 70's, the three things that terrified me most were rabies, pneumonia and the Yorkshire Ripper - happy days! 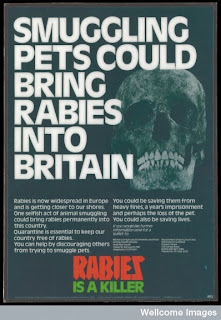 Budgie smugglers are okay though. 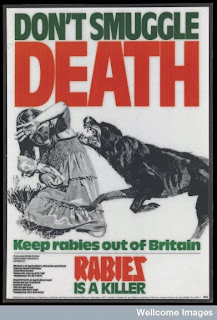 Below is Henry's rough for the gruesome cover... 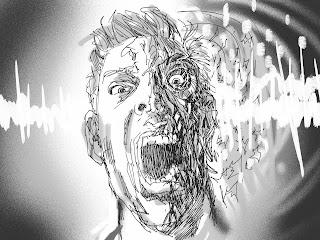 And finally his concept art for the cover which is pretty damn close to the printed version... 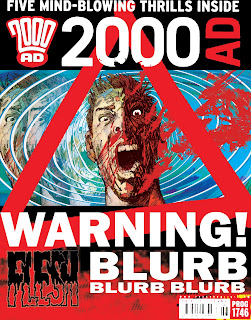 ﻿
A 70's poster warning of the deadly disease, Blurb!
﻿
"I’m aware the narrowness of the final artwork submitted needed Pye to work extra hard to make this work. He did a great job. The end result I hope is creepy and not just because it has my face on it!"

Sadly, those rollercoaster riding boy scouts with the strawberry milkshakes on Jim'll Fix It never learned their lesson...﻿

Yeah, Pye-01 certainly earned his oil rations that week, doing a top job of putting the elements together. Here's how it looks stuck to the wall at your local Customs and Excise house! 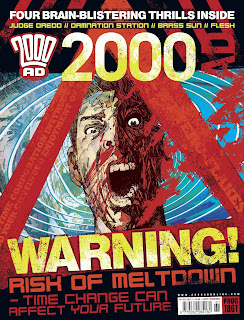 Henry Flint was seriously miscast as Carrie in the remake.
Great big walloping thank you's to Henry, what a marvellous fella and a cracking cover. Be sure to check out his marvellous blog here: http://henryflint.wordpress.com/
﻿
Posted by Pete Wells at 15:23