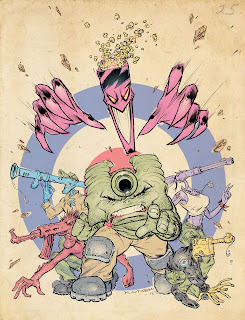 Proof that the mythological Aiken cover does actually exist!

An incredible coup this week for 2000AD Covers Uncovered. 2000AD artist Book Cook managed to erm... acquire the phone number of the British Kirby, the one and only Maurice Aitken! The mysterious artist, who is known to have inspired legends such as Kirby, McMahon, Ezquerra, Bolland, O'Neill, Gibbons and, of course, Cook himself, never gives interviews but I decided to go for it and give him a ring anyway.

Here's a transcript of our conversation...

Me: "Hello? Is that Mr Aitken? Maurice Aitken? My name is Pete Wells..."

Maurice Aiken ''Ullo? Who's that? Wells, like the fish? What the 'ell do you want - how did you get this number?''

Me "I hope you don't mind me ringing sir but I'm a huge fan of your work. I-I got your number from a friend at the Prohibited Planet comic shop in Sunderla-"

Me "I'm so sorry to disturb you Mr Aitken. I write a 2000AD covers blog and wondered if you'd-"

Maurice Aiken ''What the effin' hell's a blog? Ya know I don't like to talk about my work - especially the Gunheadz, brings back all sorts of memories... I suppose ya mean that cover from waaaay back when the Gunheadz were in that useless rag 2000AD - is that thing still going? Flippin' alien editors, I ask ya... The Gunheadz only had one cover for AD, maybe it was more I can't remember. They used to have a wicked lettering fella at IPC back then, I seem to recall he did a bang up job on it.''

Me "Yes, just the one cover, but unfortunately it was lost and never used. I believe it was lettered by a young fella called Parrnum O'Pye. He was a big fan of yours, as is his grandson, who works for 2000AD now. In fact, I think it was the grandson who recently discovered it beneath the pile of unread submissions. Oh, excuse me a moment Mr Aitken... yes, I'll have two steak bakes and a corned beef slice... sorry about that. Anyway, Tharg knew I was a fan and actually let me buy it! Two hundred polystyrene cups it cost m-"

Maurice Aiken ''You have the original?! I wondered where the hell that went. IPC were real sticklers back then, used to take photos of everything - concepts, roughs, pencils - I wouldn't be surprised if they were floatin' about somewhere."

Indeed, on aged film they did have the concept sketch for the cover and even Aitken's pencils. I asked if these came with the cover but unfortunately they were snapped up long ago by the Kirby and Ditko estates respectively... 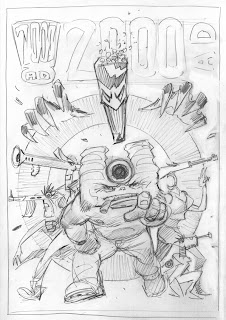 Aitken's pencils - note how Eisner would eventually adopt the same roughing style later in his career.

Here are those pencils too, a masterclass in rending which is still evident across the comics industry today. 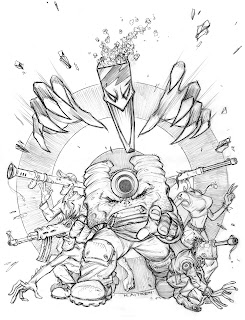 Apparently this image was repeatedly parodied by Tezuka until IPC threatened legal action.

Maurice Aitken "Anyway, I'd done plenty of Gunheadz covers before this one, but this was gonna be introducin' the gang to a whole new audience so I wanted to make sure they was all on there like. Mowser, Akay, Bazooka Joe, Lady...L-Lady Winchester, and dear ol' Sgt Howitzer. People always used to think they were American for some reason so I made sure I got the old RAF symbol in there good and bold... and...and that twisted bastard Popcon.''

And here are those other Gunheadz covers... 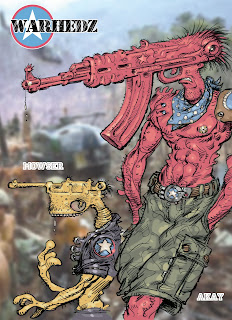 Note the Ezquerra-esque outline on Mowser, clearly the inspiration for King Carlos himself. 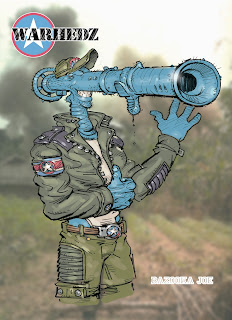 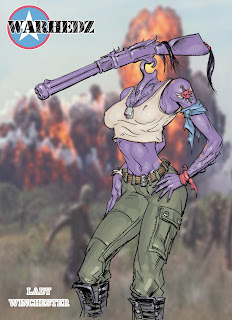 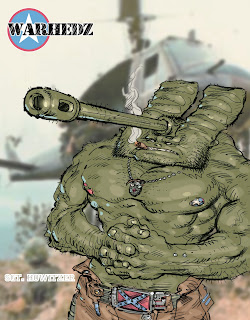 Stripped to the waist and ready for action! Elements of this early Sgt Howitzer pin up be seen again and again in Frazetta's work and is evident in early character designs by Mignola.

Me: "I've been lucky enough to have seen some of those covers Mr Aitken, they're amazing! The impact they had on the comics industry really can't be underestimated. Can you tell me a little about your style? How do you feel about the army of Aitken-clones it inspired who don't tend to credit you in their work?"

Maurice Aitken: ''My style? Well i dunno really... I've always been drawing, since I was a nipper - ya just do what comes out don't ya I suppose? I used to have a friend up north back then - the comics would come over from the states as ballast in the big ships and he'd send 'em down to me. Lot's of Jack Kirby, Joe Kubert - Sgt. Rock all that stuff... I guess that inspired me to tell my stories. People say they're a bit bonkers and wacky, but there's a lot of truth in 'em too... I uh...I don't like to talk about it really... (muffled noise in the background) I dunno Peter, I think I've probably said enough... Don't call me again please... Huh? (knock at the door) What now? Bah! Some fresh faced f**kin' Herbert with a satchel's at my door - where's my combat knife? Don't call me again. Bye!''

Wow! That was one of the best moments of my life, another thing ticked off my bucket list! Again, here's that recently discovered cover, a real piece of history there.

Note to obvious influence this cover had on O'Neill's first Marshal Law cover.

And here is how this super cover looks all lettered up, that really was the golden age of 2000AD. 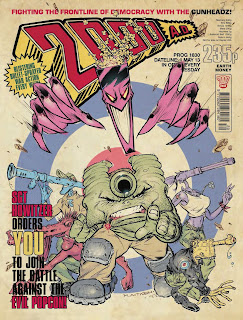 Nice to see the lettering has survived the test of time...

My thanks to Maurice for talking to... well, shouting at me, I can die happy now! Massive thanks to Boo Cook for getting me his number. Hopefully, if Boo continues to hone his craft, he will one day be as good as the mighty Aitken himself!
Posted by Pete Wells at 01:51