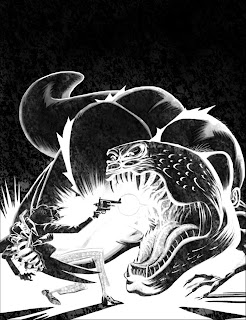 Strike a light Guvnor, Henry's changed a bit! Yes, the recently re-incarnated Stickleback looks like he's for the chop again, thanks to the digital brilliance of D'Israeli. Once again, Mr Brooker has provided a fantastically detailed, step by step account of this excellent cover with another bonus YouTube video. This handy video shows us how to select everything that is not transparent on a layer in Photoshop - very useful indeed!

Over to Matt to tell us more...

"As ever, I started with a loose brief for a cover from Matt Smith, possibly my briefest brief ever! He said "I could do with another Stickleback cover for this episode - Stickleback and Miss Scarlet facing off against the Eddie Hide dinosaur hybrid...""

In My Sketchbook (Yes! actual pens and ink and stuff!)

"Below are four quick scribbles, trying out different angles on the same idea, the idea is not to do a great drawing, but to quickly set down an idea and move on. Though these are very quick rough drawings, they’re very important - the foundation of everything to come."

"Sometimes I do lots of variations but in this case I had pretty clear images in my head. Any small refinements would be made at the next stage." 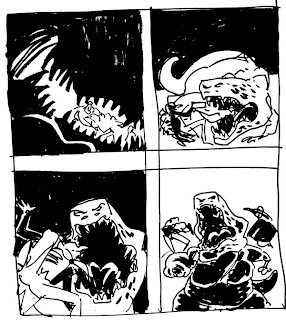 Four quick scribbles which look like my proper drawings. How depressing!

"I generated three cover roughs for Matt Smith from the three best ideas out of the four. And yes, number one is a bit of an homage to that classic Satanus Dredd cover from The Cursed Earth.
Matt went for number two." 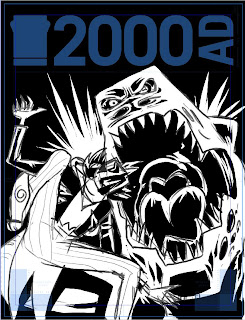 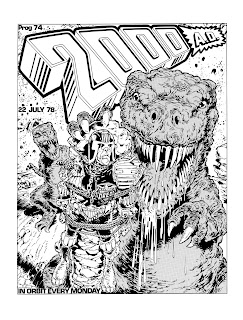 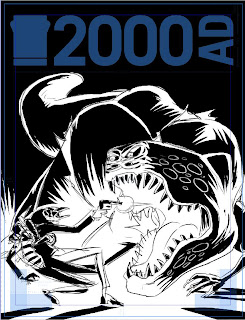 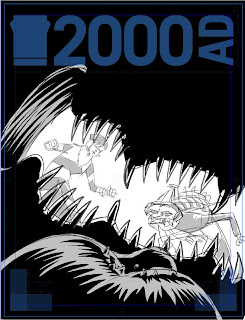 With the rough decided, it's time for Matt to crack on! "I convert rough to pale blue so I can see what I’m doing when I pencil over it. Manga Studio has a control that lets you quickly convert an entire layer to a single colour. (EX 4: Properties palette, EX 5: above the Layers palette top right.)" 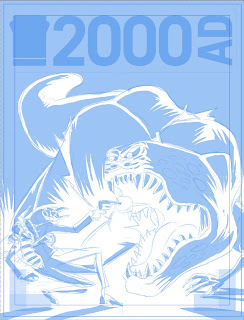 "Pencilling - tightening up the figures." 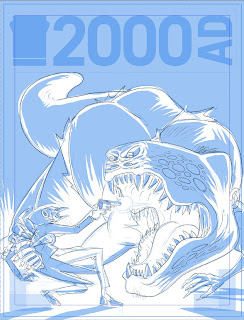 Eddie uses reverse Oil of Ulay that gently puts IN lines and wrinkles...

Time for some blocking. "On layers below the pencils, I add blocks of colour that will act as masks for the textures later on. Drawing the colour blocks is relatively slow and finicky because these define the “outlines” on the finished piece. My demo for the previous Stickleback cover (here) goes into much more detail about this." 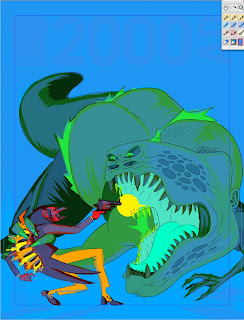 Old Eddie's looking a bit green around the gills...

"When this stage is done, I export to Photoshop format."

"Manga Studio works natively at 600dpi; that makes for unwieldy Photoshop files, so I downscale the file to 400dpi using Image: Image Size… (Alt+Cmd/Ctrl+I), with Resample Image set to Nearest Neighbour (preserve hard edges) which gives me nice sharp edges for the selection tools to grab. The 400dpi resolution will keep everything nice and sharp looking when the file is printed." 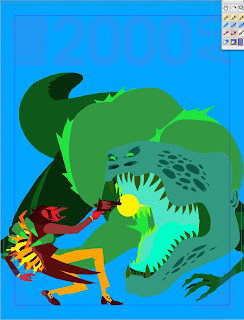 "I also add a white layer between the colour blocking and the drawing textures; this lets me see the image as it will appear when finished, but I can hide it to get at the colour blocks to make masks.
The previous demo included a video showing exactly how this worked."

"Textures over the colour blocks." 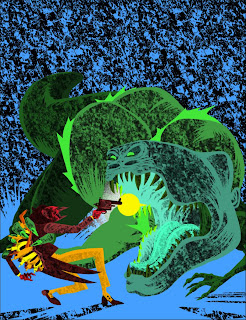 "Textures only. There are two sets of textures, one at 100% opacity, and another, on a separate layer, at 50% opacity to give textured greys (both layers set to Multiply so stuff will show through underneath them when I add it later). As you can see, the textures alone look like an indecipherable mess. Most of the work after this stage will be making a "readable" image out if this mass of textures." 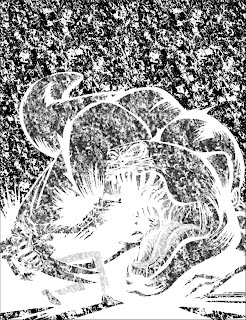 Bravely, D'Israeli kept on working through the freak snowstorm...

"Under-filling the textures. In the last demo, I described this process, this time, you get this video..."

"Straight away the drawing becomes much clearer." 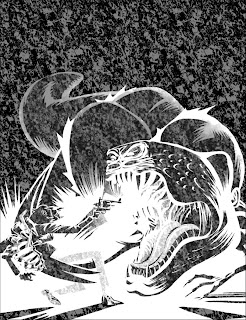 "Blacks. Same trick with something extra added; I want to paint over the 100% textures (and only the 100% textures) with scrubby, painted-looking black that will help to define certain bits of the image, but still leave some of the texture showing through. So, first, Select: Load Selection with Channel: Layer Transparency selected gives me a selection of the 100% textures. Go up to a new layer, fill with white ("What?!?"). Set the layer mode of this new layer to Multiply, then check the "Preserve Transparency" checkbox."

"Why? Setting the layer to Multiply makes the white fill transparent (so invisible), and Preserve Transparency locks the layer so you can only paint on those invisible pixels. I know where the shading's going to go (because it corresponds exactly to the textures that are visible underneath), so I can bash away with a big Brush loaded with black and it won't go anywhere except over the textures. I scrub in the black, selectively darkening areas (I can even use selections based on the colour blocks on the bottom layer to control where the black goes precisely)."

"Now you can properly see what you're looking at - Stickleback and the Hyde-osaur stand out nicely. Everything after this is refinement." 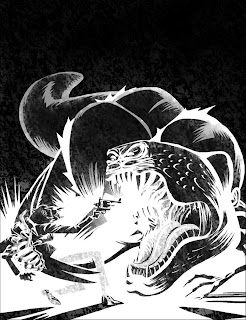 "Painter is a graphics program similar to Photoshop, but specializing in simulating the texture and brushstrokes of real media like watercolour, charcoal, crayons and so on. Painter will open Photoshop files, so there's no need for any sort of export process. It can produce some spectacular effects, but the extra processing power needed for those "real" brushes means it runs s-l-o-o-o-w-w-l-l-y-y on the sort of high-resolution print files I work with. Thus I use it for adding an layer of finish to stuff I do in Photoshop, and I try and keep my use of Painter to a minimum."

"I use the Watercolour Brushes in Painter to soften up some of those hard edges on the texture blocks, and add just a little detail to the areas of plain white. Again, I use selections based on the colour blocks on the bottom layer to constrain the painting and speed the process up (I started out as an airbrush artist and old masking habits die hard)."

Wow, those final touches really bring the cover to life!

"This is a pretty simple cover, so that’s it for the drawing and painting. I save a copy of the file as a TIFF and go back to Photoshop for final processing."

Back in Adobe Photoshop

"This file has been saved in RGB colour (Painter doesn’t really handle anything else) so I convert the file to greyscale - this makes it much smaller for FTP upload. Done!"

And here's how the cover looks on the prog. It would appear that the design droids at the Nerve Centre have added a bit of a blue wash. Nice... 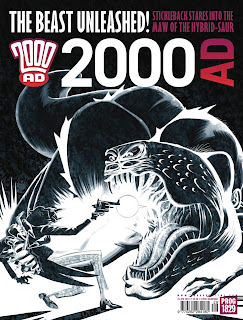 Thank you so, so much to Matt for another brilliant cover breakdown, he really does go the extra mile! Make sure you visit his incredible blog where you can read fascinating references to the hidden gems in the strip.
Posted by Pete Wells at 15:22