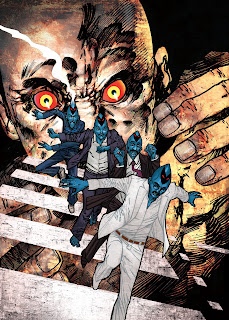 It's Sc4rab-mania on this sublime, psychedelic cover from the Fab erm... one, Mr Henry Flint. This exquisitely composed cover features the new 'improved' Zombo looming over the Sc4rabs, creeeepy!

Strangely, since this cover was published, many conspiracy theorists have claimed that Zombo is NOT dead. Pointing to several desperate clues to prove this. I'll let you make up your own minds...

Henry was good enough to tell us about the cover, he says "The brief was to come up with a cover featuring Zombo and the Beatles... eh sorry, the Sc4rabs. For an iconic image I chose the Abbey Road cover. Matt liked the first sketch but wanted a big head shot of Zombo behind the Sc4rabs instead of the small full size Zombo.... It’s a much better idea, good call..." 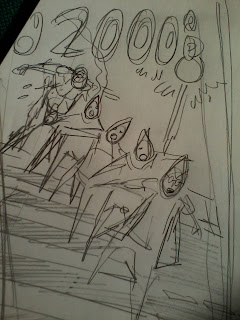 Henry continues "For reference I didn’t use the Album cover but this photo of the Beatles just as they were walking onto the crossing." 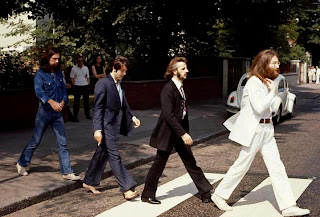 So again, that wonderfully twisted finished image. Ever the perfectionist, Henry claims he went 'too dark on the blue faces,' crackers!

The zomb with kaleidoscope eyes

And finally how the prog looks on your shelf, I love how the design team have utilised the 'too dark' blue, nice punnage too! 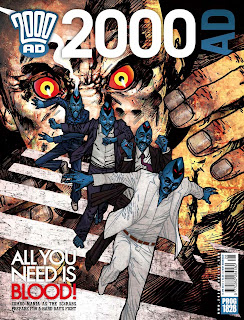 Special thanks once again to Henry, this is a seriously excellent cover. Check out more of his beautiful work at http://henryflint.wordpress.com/