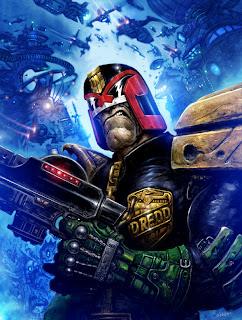 In Tin Man Games' brilliant new iPad game, YOU are the law! Next week sees the release of the Aussie company's latest chose-your-own-adventure style game-book for the iPad, Judge Dredd: Countdown Sector 106. Over the last few months I have been lucky enough to Beta test the game, here's my verdict!

Playing as Judge Dredd himself, you are drafted to the crime-infested Sector 106 to help out, thanks to a judge shortage. The sector has it's fair share of problems, including juve gangs, deranged mob bosses, Zizz dealers and even evil serial killers such as the Dockside Strangler - a notorious fiend who is targeting slabwalkers at the smuggler-ridden port. Furthermore, as you progress through the story (or more accurately, stories,) a much bigger problem comes to light which will require all of your judicial training, cunning and a fair bit of luck, to solve! 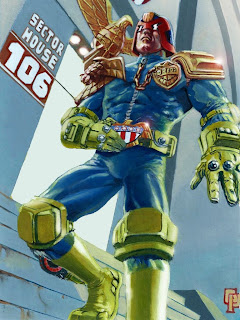 You ARE the Law!

Here's an example of how the game plays. Early in the game, after dealing with a couple of run of the mill crimes such as a sky surfing mugger and a jewellery theft, you arrive at a scene of utter pandemonium at the Sam Walton Shopping Promenade.

A vehicle has crashed into a 'Chez Ugly' clinic at Harridges department store, causing fires, multiple fatalities and injuries and spewing thick clouds of toxic gas throughout the scene. What will you do? Help the injured, call for back up or enter the mall to survey the damage? Whatever you decide, and whatever consequences you face as a result, it soon becomes apparent that the crash was no accident, and something much more sinister is happening inside the mall...

After you have fought your way through various Dreddworld establishments (fatty clothing store, face change parlours and so on) you realise that the accident was a distraction, to cover a daring Sexmek heist! You are faced with the scene below: 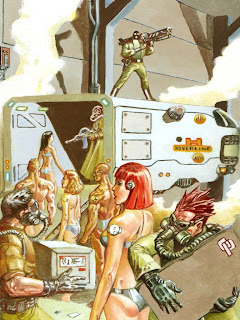 "I want your sex!" A daring gang make off with some valuable Sexmeks!

And the following choices:

What would Dredd's Comportment say?

So Judge, what would you do?

While you control Dredd's choices in the story, combat and other events are determined by the roll of one or more dice. Combat works in different ways - in a gunfight you are told how many points you need to win (for example 13 points.) You roll the dice, if the number you get added to your base Lawgiver score equals or exceeds 13, you win, if not, you lose, costing precious vitality. Cleverly, at times you are offered the chance to use different bullets from Dredd's armoury, however these can bring their own challenge. When firing a ricochet bullet, for example, you may down three perps if you roll 14 or higher, two if you roll 12 or higher and so on.

Daystick or fistfights again rely on different rolls of the dice; you or your attacker roll several die, the highest number on one dice becoming the attack strength. The opponent then rolls the die, if none of their die beat that number they are injured, however if they match or beat it, they dodge the attack and can counter attack! 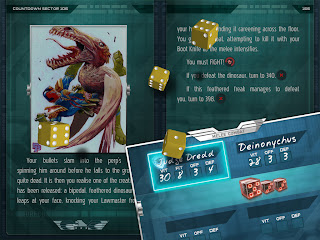 Of course Dredd's has more than just weapons at his disposal, he can use his fearsome reputation to stop an incident before it begins, by implementing an authority roll. For example, as a bag snatcher begins to run off you can shout for him to "Stop!" an authority roll will decide whether you're intimidating enough.

Add to this chance rolls, agility rolls and more and you can see there's real variation to keep you hooked in the game.

The Hall of Heroes

Longevity is further added to the game with a smart achievement system which encourages you to explore every possible outcome in the game. Some of the thirty achievements I've earned so far include "Sky Surfing USA" for riding a powerboard, "Throw a Percy" (think about it, Blue Peter fans) for destroying a pot plant and my favourite, "Dibnah Style" for using Hi-Ex rounds!

You also collect any in game art you uncover during your adventure to look at in more detail later, can you find all the illustrations to gain the "Art Heist" achievement? 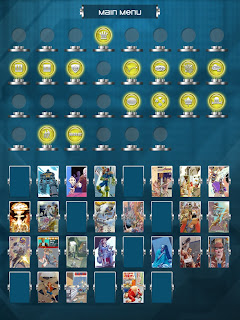 The Law in Order - Can you earn all of Dredd's Achievements?

Similarly, as you arrest perps throughout the game you gain their rap sheet, making for interesting reading when you're not playing the game. 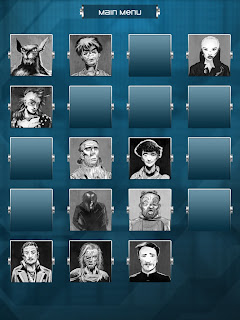 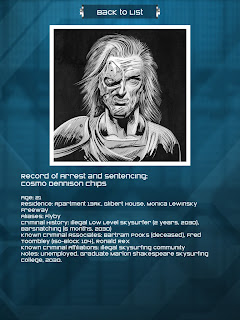 Cosmo here is a graduate of the Marlon Shakespeare Skysurfing College, 2030
The Verdict...

In all honesty, I love this, and would recommend it to any Dredd fan! The writer, Nick Robinson, seems to have an excellent knowledge of Dredd and his world as the story is chock full of Dreddworld references from sky surfers to Ugly Parlours to Gunge to Zizz dealers. The tone of the writing is great too, featuring a vast range of engaging scenarios that have the balance between old school Dredd action and humourous Megacity madness just right.

The gameplay is great too, you really have to think like a judge when engaging in the various fire fights, lawmaster chases, procedurals and fistfights as the story progresses. Thankfully, on arrival at the sector house you are given a chance to hone Dredd's considerable skills in three areas, boosting your base stats. A visit to the firing range will add points to Dredd's lawgiver stats, helping in firefights throughout the game, where as a visit to the garage will tune up Dredd's Lawmaster, giving you the edge in any subsequent chase. A visit to the briefing room can help Dredd spot wanted perps or arm him with significant intel to help you make the correct choices through out his adventure.

Though the game is very well presented, a very minor quibble lies in the artwork, which has been painted by, I assume, an in house artist. While the art is not too bad, it would have added real authenticity if an existing 2000AD artist could have been commissioned to provide the artwork. However, as the examples below show, the artist (a guy called German Ponce) seems to have a good knowledge of Dredd's world. 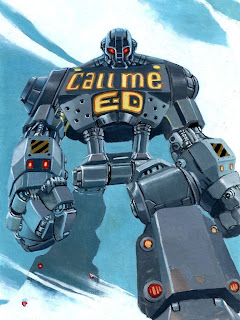 Robot War - Will you use Armour Piercing or Hi-Ex? 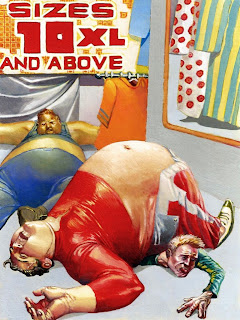 There's absolutely hours and hours of exciting, Dredd-based enjoyment in this game. I've taken several paths in the book which have taken me all over the sector and I feel like I've still only scratched the surface. This game is massive, and deserves to be huge!

When playing, you really do feel like the famous law man as you agonise over the countless decisions you have to make. Are you going to take the stealthy route, try to trick your way into a situation or go all guns blazing? The situations you find yourself in range from the sublime to the ridiculous but always feel like they could have come straight from the pages of 2000AD itself.

Tin Man Games have done an admirable job of bringing Dredd and his colourful world to life, I genuinely hope that this is the first of many adventures, imagine taking on the Dark Judges, the Sovs or even crossing The Cursed Earth! I'm sure the company would do a great job of plundering the 2000AD back catalogue too, we could have epic Quests as Johnny Alpha, take on the Norts as Rogue Trooper or even earn a fortune as a Buttonman. So many possibilities!

Buy this game Earthlets, I promise you won't be sorry!
Posted by Pete Wells at 04:14