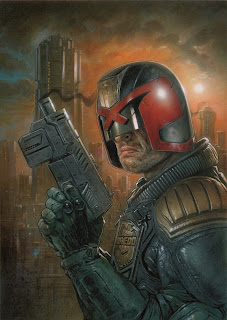 When you're asked by film giant Lionsgate and 2000AD to do a cover for one of the biggest, most anticipated movies of the year, it's pretty hard to say 'No', no matter how hectic your schedule is, as Greg Staples found out!

To compliment the highly anticipated Dredd movie, August sees the release of a digital comic exploring the origins of the movie's main villain, gang boss Madeline 'Ma Ma' Madrigal. The script is by Tharg's chief assistant Matt Smith and illustrated by the phenomenal Henry Flint, the story sports this beautiful cover by the legendary Greg Staples.

Greg said "I was asked by both companies to do a simple, iconic Dredd image for the story only two weeks before going to San Diego Comic Con. I had loads of work to do but simply couldn't turn this down!"

Greg used the movie poster as an influence as well as, quote, "a tonne of reference material that Dredd fans would kill for!" to help him produce the sketch below... 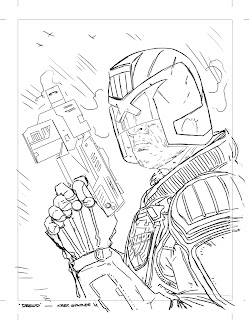 With the sketch approved, Greg set to work on this beautifully detailed underdrawing which he would use as the basis for the finished image. Note the blank background, Greg explains "At this point, I'd only seen the poster which is very dark. I was going to go for a generic, smoky kind of background in keeping with the tone of the image..." 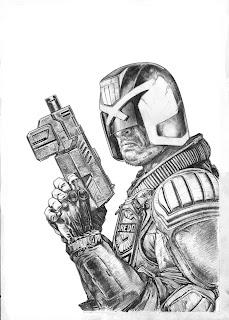 However, with less than a week to go before SDCC, the brief changed significantly. An incredulous Greg laughs "Someone asked 'Could you 'just' put a city in the background!?!' I explained to them that this was to be fully painted and not a digital image. To paint an entire city takes an awful long time!"

However, Greg agreed, mocking up the fantastic preliminary images shown below. He said "I wanted to offer a choice. I'd not seen the movie at the time but had seen the trailer which again looked quite dark. For this reason I did one in daylight and one set at night."

It was decided that the lighter version would be used and Greg was finally able to begin to paint! 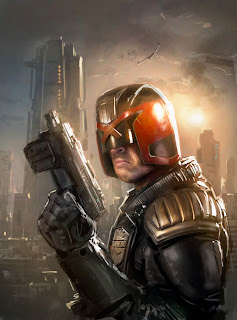 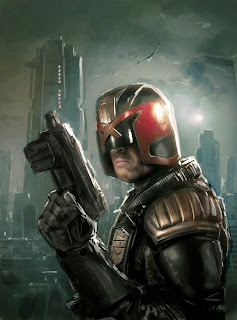 Greg printed out the daytime mock up and used this as reference for the amazing final painting below. Really taking it to the wire, Greg said "I was flying to America with the 2000AD crew on the Monday so had to have this delivered by the Friday before. After working on it for three days I literally finished it on Thursday night and jumped in the car to deliver it by hand. The paint was still wet as we jetted of to SDCC!"

It's a stunning image which, like the film, has been very enthusiastically received. Modest as ever, Greg said he's quite surprised by this, saying "You never know how these things are gonna go."

While in San Diego, Greg was been lucky enough to see the movie, and he told me about the screening. He said "I had a hectic few days doing the cover, then driving down to London before an incredibly long flight to America. We arrived, very jet-lagged, in San Diego at 8pm and the screening was at 10pm!" After a stressful dash to the venue, Greg's troubles were only beginning, he continues "Karl Urban was seeing the finished movie for the first time. He and Olivia Thirlby introduced it then Karl sat down next to me! I was desperately tired but was terrified that I'd yawn or sag during the showing!" Thankfully, the movie was so good, Greg was great throughout!

Naturally, I asked for Greg for his honest opinion, he said "It's brilliant! It was apparent almost immediately that we've got something very, very special here. It looks, and sounds, amazing! The cinematography is stunning and it's strange, but people were actually saying it's the best sounding film they've experienced!"

He was also complimentary about the cast and crew, saying it was evident that everyone he spoke to was passionate about Dredd and many were real fans. He was particularly positive about Karl Urban, who he called 'a lovely bloke' even when Greg accidentally put his name card over Karl's during the Masters of the Web panel, much to the audiences delight!

Massive thanks to Greg for taking the time to let me speak to him, especially after the frantic few weeks he's had! The web comic will be available in August and, I'm sure you don't need to be told, Dredd opens in the UK on September 7th!
Posted by Pete Wells at 04:12