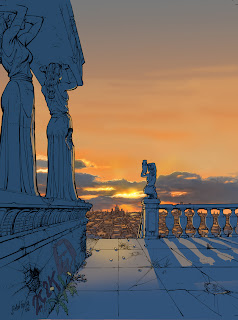 The sun rises over a Russian landscape forever changed by one man...

﻿
This week we wave a sad goodbye to one of 2000AD's most endearing characters, Russian Rogue Nikolai Dante, the only strip audacious enough to have trounced Dredd in the Eagle Awards!

Co-Creator Si Fraser has provided a beautiful farewell cover that, true to the character it represents, has broken convention and is as individual as they come! Here's Simon to tell the story: "So here's the last Dante cover, and this one has been controversial! Some felt that not having Dante on the cover was a mistake. I really wanted to take a step back though, make an image that would be powerful due to the lack of Dante, the feeling of his absence. I wanted to make a cover image that would work before you read the story and also afterwards as a coda. The sky is a sunrise not a sunset, with all the future that implies."

I have to say that this certainly was the case for me. I'm a huge fan of Dante and am ashamed to admit I had a restless night before my prog arrived and had butterflies in my stomach before reading the strip. When I saw the cover (thanks to the subscriber's preview at ECBT2000AD) it struck me how much the Karyatids looked like they were carrying a coffin and the general sadness and emptiness the cover conveyed certainly made me fear the worst...

Simon continues "I threw a lot of cover ideas around, discussed it with my studio mates (thanks to Jason Little for the Karyatids) and finally did the pencil sketch. I thought it could be a tough sell. I'm not aware of any other 2000AD cover that has had no characters in it at all..." ﻿ 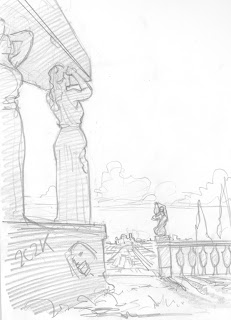 Pencils with plenty of character, but no characters!

"I think Matt did some consultation around the Nerve Centre (he must have asked Tharg - Pete) and then gave me the go ahead. The execution was pretty straightforward."

Below we can see Simon's digital rough, a smashing image as is. 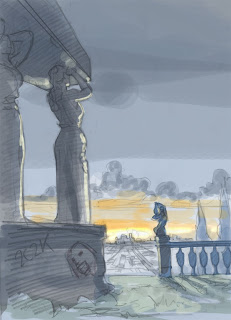 Is this the end for Russia's greatest love machine?

The inks once again show us what a fine draughtsman Simon is. Beautiful perspective, amazing architecture and those weeds are superb... 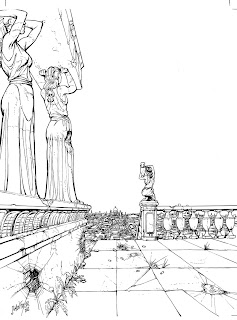 Such a haunting image.

And finally, the awe-inspiring finished cover. Simon says "I'm very happy with the sky, which is a digital painting."

A new dawn, but will Nikolai be alive to see it?

Hat's off again to the design team at 2000AD. It's amazing the way they have made 'The End' a part of the image, I'd looked at Simon's 'clean' version loads of times before I noticed the type wasn't part of the image. Brilliant! The End. But what's next for Morrison and Fraser?﻿

Over on Simon's blog he thanks the people who have helped craft Nikolai's adventures over the years. He was kind enough to extend his thanks to this very blog and it's readers, saying "Thanks again to you Pete, your support has meant a big deal to us. Your Dante in covers summary was a tremendous piece of work. Thanks also to all the 2000AD fans for their support over the years, it's been a kick!"

I'm sure you'll agree with me that the pleasure was all ours. I've laughed, swashbuckled and maybe even shed a tear or two at Dante's amazing adventures over the last fifteen years. Seriously comics, and comic creators, at their very, very best.