This months' Megazine features a beautiful, Akira inspired cover by the brilliant Chis Weston. Chris worked on the aborted Akira movie which was obviously the basis for this cool-as-you-like image. I contacted Chris and asked him to tell us more...

"I think most people know that I recently spent  a great deal of time working on a live-action adaptation of Katsuhiro Otomo's "Akira." I was literally two weeks away from going out to work in America on official pre-production when the plug was pulled on the whole operation.

This was due to a myriad of reasons: budget, script and the lack of a decent leading man who could carry the film.

Obviously I has immersed myself in Otomo's art during that period and couldn't quite shake off his influence. In particular, I felt primed to draw some heavy sci-fi bike action.

My upcoming Dredd story "The Death of Dan-E Cannon" features a lot of subtle references to "Akira"... it was written to be an episode that showcased Dredd's classic motorbike in all its glory.  I went to the trouble of building a 3D model of The Lawmaster in Cinema 4D so I could find some angles of the bike we hadn't seen before. It was while I was flipping the model around that I stumbled across the angle that Otomo took for his famous "Akira" poster..." 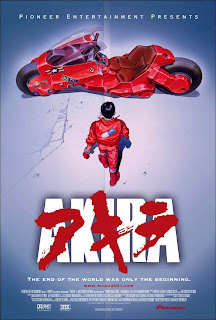 That iconic image, a classic!

I'm sure everyone reading this will be aware that to date Chris has written a few gems for Tharg, so it's great to see him having a crack at Dredd. I'm sure I won't have to tell anyone that Danny Cannon was the director of the Judge Dredd movie of 1995.

Chris continues "That gave me the idea to do an homage to "Akira." First, I created a digital monage of the composition..." 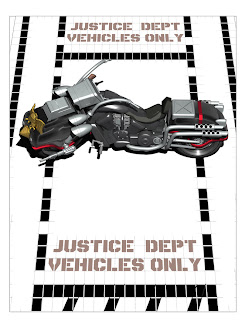 "Then I printed this out and traced it onto my art board in pencil, adding the figure of Judge Dredd." 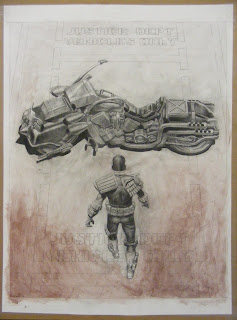 Of all the images Chris sent, I think I've looked at this the most, I love it!

"This was stretched onto a wooden board and an undercoat was applied." 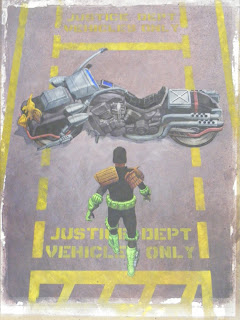 "Then it was just a matter of adding layers and layers of acrylic until I realised I was probably over-doing it... as usual!"

So below we can see Chris' incredible painting, Dredd looks like he means business! 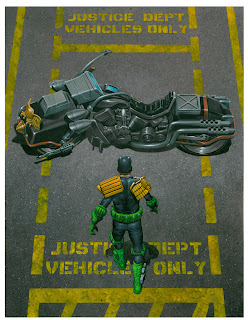 Another day on the streets for the Meg's premier law man.

"Finally, I scanned the painting back into the computer. I then adjusted the colours and added some metallic highlights. And, voilà, that was that."

The finished cover, an absolute masterpiece!

And here's the cover as you'll see it on your Meg... 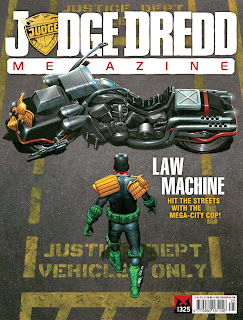 As an aside, I really liked how 2000AD design droid PYE-01 took the image and added a few subtle tweaks to create a striking ad for the Meg on the back of the prog. It was almost like having a Star Scan! 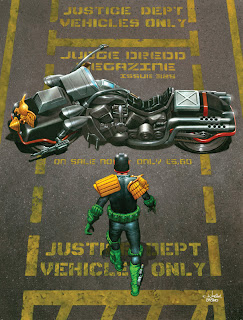 A HUGE, huge thanks to Chris for being so generous with his time. This is such a cool cover and a perfect homage to a great artist from a great artist. Please visit Chris' blog here.
Posted by Pete Wells at 05:41