This excellent story boasted brilliant characters, beautiful art and a real shocking twist of an ending (see series recap below.) This time, it would seem that book 2 will focus on one or more different historical periods as Azrael's grievous journey continues.

Friend of the blog Simon Davis has produced the first stunning cover to the series, a really creepy image I'm sure you'll agree. Many times on this blog I've featured Simon's excellent, fully painted 'sketches' and he was kind enough to send the one for this weeks' cover. And what a sketch, it's absolutely amazing! 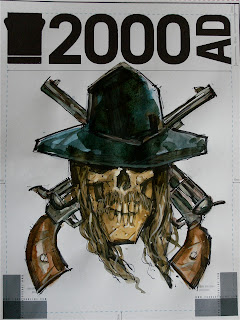 And below is the finished version, what a wonderfully atmospheric piece. Si doesn't own a scanner so whenever he does a cover I have to pester Simon (Pye) Parr from the nerve centre to send me his version. In my email I mentioned how much I loved this cover and Pye agreed, he said "It's one of my favourites too! He's done a few lately using oils on canvas, and they've all been brilliant. He's got an excellent Anderson one coming up and I loved the Angel Zero one too."

The covers may look beautiful but they cause one or two headaches for the production department. Simon continues "We have to get a guy from the office (Kevin Bezant) to photograph the covers rather than use the scanner as it picks up all the texture of the board." 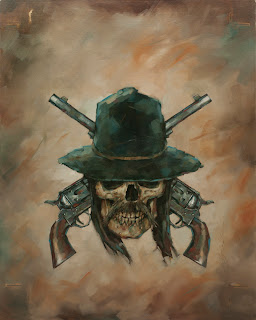 You may have noticed over the last few weeks I have begun to put the 2000AD cover up with the logos etc. on too. Although the purpose of this blog is to showcase the cover without the blurb, I think it's also only fair to show the cracking job the design team do. Just look at how the 2000AD logo is textured and the writing is actually part of the image, brilliant! 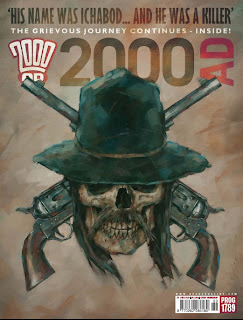 The cover as you'll see it on the stands.

Before I start, there was a rather fifty trailer for book 1. I wish Tharg's droids could find the time to do more of these. Check it out...


Cool eh? So, here's a recap of the original story to bring you up to speed on current events.

Ichabod Azrael was the meanest son of a bitch in the old west. An evil, bloodthirsty killer who'd butcher men, women and children without a second thought. As a result, the terrified townsfolk of Corinth hired bounty hunter Bloody Bill Sterling and his boys to take down the vicious killer.

The gang ambushed Azrael and filled him full of lead. As he dragged his bleeding body out of the town, he was shot in the back of the head and killed by a mere boy. Ichabod Azrael was dead, now his killin' spree really began!

It turns out Azrael isn't the dying type as he'd found love in the mortal realm and wasn't quite ready to give that up yet! Dragged into a colourless afterlife, he discovers he has enough piss and venom to actually harm the demons that rule the underworld, and begins a bloody trek to escape back to the land of the living and to the arms of his love.

He is joined on his quest by two compadres, General Nathaniel M. Beauregard, a serial bigamist with a terrible prejudice against indians and Deputy Zebulon Crow, a shy, overweight, yet brave deputy whom Ichabod himself had killed. As the trio journey through the dangerous, ever-shifting landscape, they are continually watched on the periphery by the mysterious Charon, ferryman of the dead. Azrael notes that this mysterious observer was also present at his death...

Following a fierce sandstorm, the men find themselves at a ruined wartime aircraft. Unable to comprehend what the 'metal bird' is, they explore and find a demon inside. He gives them a map of the underworld and tells them they need to find 'The Angel of Tears', atop the highest mountain, to get home.

Also on the aeroplane, is a mysterious photograph of the plane'spilot. He is another Ichabod from another time, with his love in his arms. As the men ponder the meaning of the picture, an army of demon enforcers arrive which, to everyone's amazement (including his own) are wiped out by Crow using the plane's machine gun turret. As the death toll rises, vicious tracker The Hunter and his demon hounds are sent to stop Azrael once and for all.

Eventually the three reach the mountains but are set upon by the Hunter and his hounds. Azrael pushes on, coldly leaving his companions to be ripped apart by the Hunter's beasts so he can get home. However Charon appears and a massive battle ensues between him and the Hunter. As the fight reaches it's climax, Charon disappears...

Ichabod reaches the summit of the mountain, to be once again greeted by a colourless town of Corinth and demonic versions of Bill Sterling and the boy who'd murdered him. It turns out that these are the manifestation of the 'Angel of Tears' and guard the portal between worlds. Azrael kills both parts of the angel and, as he is about to step into the portal to go home, hears the desperate cries for help from Beauregard and Crow. A newly discovered sense of morality makes Azrael turn back to help his stricken friends.

Azrael and the Hunter go at it with terrible, apocalyptic results. During the battle Crow discovers the portal to the land of the living and crosses over, resurrected into the real world again. He enters Ichabod's home, expecting to find his lover but is instead shocked to find Charon. It seems that the ferryman sensed Ichabod's incredible tenacity and vicious streak. He created Ichabod's lover to tie him to the real world before sending the Angel of Tears to kill him. Charon knew Ichabod would find the portal, then Charon himself would use it to escape from the afterlife.
7
The furious Crow asks Charon about the photograph on the plane. Charon explains that because of the escapes from the afterlife, realiy is broken and time is fluid. The Hunter will use this to persue Azrael wherever or indeed, whenever he may be. In a somewhat ambiguous ending, Crow promises he will do everything to help Ichabod and Beauregard before kneecapping Charon, showing that some of his compadre's viciousness had rubbed off...

The first series had two excellent covers, the first was this classic by Ben Wilsher which really set the tone for this unforgiving series... 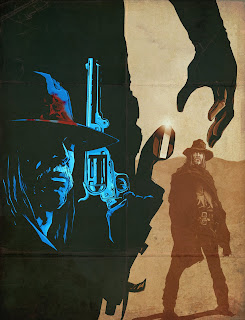 Ben Willsher - He's quick on the draw!
(See the 'making of' here)

This second, almost biblical cover was by Siku. I adore the colour palette and composition of this one... 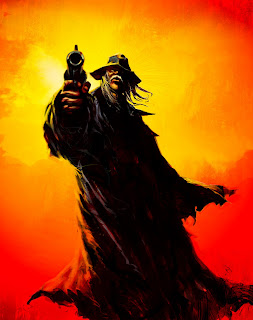 Azrael smites the sinners!
(See the 'making of' this cover here)