Jon Davis Hunt - Gaze into the face of Dredd. 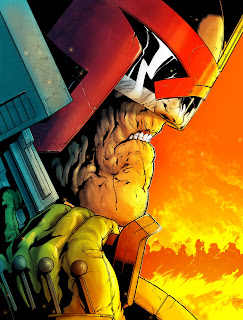 Feast your bionic eyes the powerful cover of Prog 1787 by the brilliant Jon Davis Hunt. The cover shows Dredd's face in intricate detail as his beloved city burns. Chaos Day, after a harrowing build up of 44 progs (that's almost eleven months Earthlets!) finally arrives with yet more devastating consequences. What emotions do you see when you look into the lawman's face? Is he beaten? Determined? Angry? Lost? All of these? Hopefully we'll find out in this blog entry!

Jon has, yet again, produced a fantastic cover which is masterfully inked and beautifully coloured. Here he is to tell you about his creative process.

"Let's start with the roughs. Tharg said he simply wanted a cover featuring Dredd and a burning Meg to kick off the Day of Chaos. At first, I asked if I could stick in the Dark Judges too, but the All Mighty One said that nope - all he wanted was the big man, looking beaten, but mad as hell!"

"I did a few Roughs first. It's always tough to come up with a twist on the iconic Dredd image as he's been done so many times by so many better artists than me. However, in the end, I decided to go with a close up profile shot. Firstly, I thought this would be a great chance to focus on Dredds most notable aspect, his chin, and secondly, I thought it would provide a nice book-end image to go with the rather awesome Langly cover that kicked it all off. I decided from the off that I wanted Dredd to be quite beaten up in this, but not so much so that he didn't look more than capable of kicking some ass, so I kept the camera really close. That way, I could add in lots of scratches and fine detail, while keeping the big man in overall fighting form." 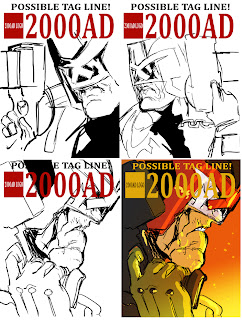 Next, Jon takes us through the inking phase "Once I had a rough I was happy with, I enlarged it in size and went straight to the inks. I'm feeling more and more confident with my inking now, so really enjoyed this phase and started to add in plenty of detail around the visor and of course, Dredds face."

Jon being modist as ever there. I have to say, I've spent waaaay too long staring at the ho-res version of these inks. Absolutely phenomenal work from an artdroid at the very top of his game... 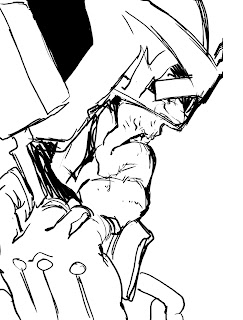 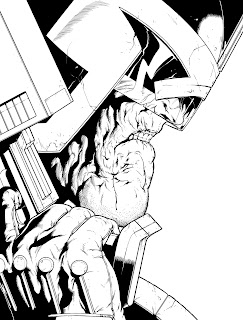 Before he absolutely inks the Stomm out of it - simply stunning!

With the image inked, Jon begins to colour Old Stoney Face, really bringing him to life. Jon continues "Base Colours - I always like to get my colour palette straight before I light the scene with colour washes, so here, as I already new the city was going to be in flames, I just focused on getting the colours right as if Dredd was just standing around on a nice, bright sunny day!" 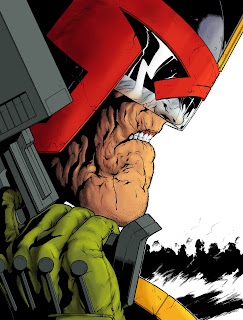 "Dredd just standing about on a nice sunny day" Ha! Obviously not a sun worshipper then!

With the base colours down, Jon gets to work on making the cover pop! He says "I then really went to town with the oranges and blues here, contrasting the bright flames of the burning background with with the darker, blue shadow that's creeping round behind Dredd. I tried to get across the different materials of Dredds helmet too and then used several more washes to actually cover the background inks, so that they turned from black into a deep, burnt amber...." 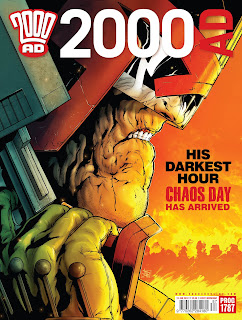 How your prog looks on the shelves...

Jon summarises "So there ya go! Hopefully a Dredd that looks like he's down, but definitely not out!" Man I hope so, but the way this amazing epic is going, anything could happen!


So there we have yet another absolutely excellent commentary by JDH! Huge, huge thanks to Jon for sending the images and text and for his massive support for the blog since it's inception. Please visit his site at http://jondavishunt.com/

As soon as I saw this cover I wondered if Jon had taken inspiration from Clint (you can see the making of Clint's cover for Prog 1743 here.) I couldn't resist putting the two images together and they look great side by side! Just look at how the fire merges into both images, brilliant! 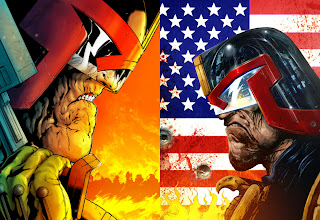