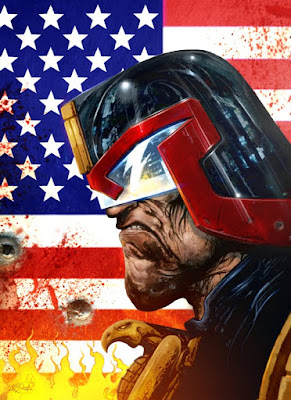 Yes!!! The return of Clint Langley! On the day when a brand new Dredd epic kicks off and we get a new, rather cool photograph of Karl Urban from the forthcoming Dredd movie. A hat trick and no mistake! 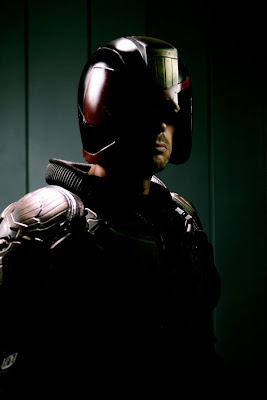 Clint's image is for the opening part of Day of Chaos, the brand new Mega Epic by John Wagner. The first arc of which features stunning art by the brilliant Ben Willsher which features more Dreddworld cameos than you can shake a daystick at! I asked John to give us a clue as to what Day of Chaos was about. He said "Let's just say that it's 30 years since the Apocalypse War and the destruction of East-Meg One. Some people might be a little...bitter?"

John gave details of the format of the story in a recent interview with goodcomicbooks.com. The tale will be similar in structure to more recent mega epics such as The Pit and the amazing Tour of Duty being made up of "a lot of shorter stories, some of which may seem at first only obliquely connected to the bigger picture – building up to an electrifying and violent conclusion!" Can't wait!!!

Below are Clint's fantastic inks for the image, I love how pissed off Dredd looks... 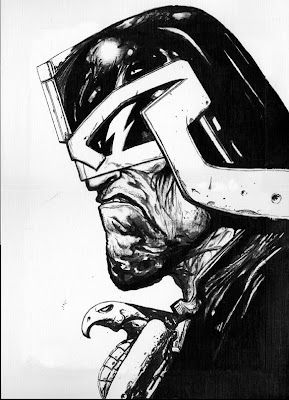 Next, as if by magic, Clint digitally enhances the picture to brain scrambling proportions! Just look how realistic Dredd's flesh is! And check out the burning city in his visor, I have a feeling this epic is going to be just that!

Thanks as ever to Clint for sending the images. He tells me he's working hard on American Reaper for his Repeat Offenders company at the moment, but hopefully he'll be back on ABC Warriors soon.
Posted by Pete Wells at 15:16