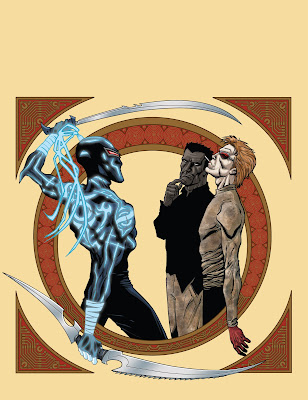 After working for the mighty one for twenty one years, Anthony Williams has certainly cemented himself in 2000AD legend with an incredibly broad portfolio for both 2000AD and beyond. Starting his 2000AD career illustrating PJ Maybe's exploits during Necropolis, he quickly became principle artist on strips such as Sam and Samantha Slade, Kola Kommandos, Babe Race 2000, The V.C.s and most recently, Sinister Dexter. While some may question the quality of some of those series' scripts, no one could ever doubt the quality of the top notch artwork.
Tharg isn't the only fan of Williams' work as his portfolio reads like a who's who of Mega corporations including giants such as the Google, the BBC, McDonalds, Burger King and of course Marvel and DC. Not too shabby eh?
Anthony has taken his immense creativity and used it to form something of a cottage comics and illustration industry. Branding himself as the Comic Stripper and employing several like-minded, Oompa Loompa-style creatives to create a host of custom comics and artwork. You can see his excellent website here, for which I urge you to subscribe to his weekly newsletter which is ace! Anthony and co are obviously having far too much fun in their comics factory, producing spoof adverts such as the one below. Who wouldn't want to work there!?!
Note Anthony's excellent Dredd-style grimace at the end of the ad...
Back in 2000AD, Anthony has returned to Sinister Dexter, continuing to plot the gunsharks' adventures in Charon's Crossing. After being hurled six months' into their future, Ray and Finny are busted from custody by a mysterious, shape-changing agent of a shadowy organisation known as Context. Below is Anthony's rough, I love how the image is framed by those swords... 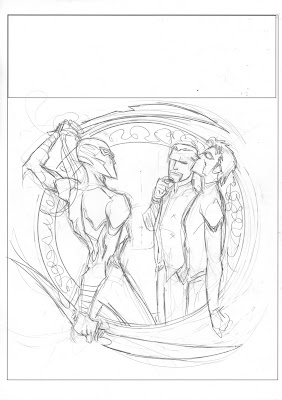 Next, we have Anthony's very cool pencils... 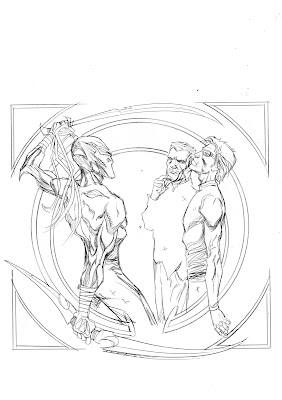 And his gorgeous inked image... 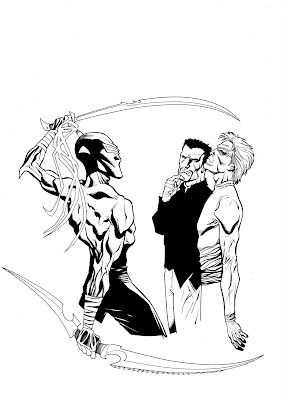 Finally the extra details are added digitally by an Oompa Loompa known only as Rob to really make the cover snap, crackle and pop!

Thanks to Anthony for finding the time to send the images, they're ace! Quick, go and subscribe to his newsletter!
Posted by Pete Wells at 01:34