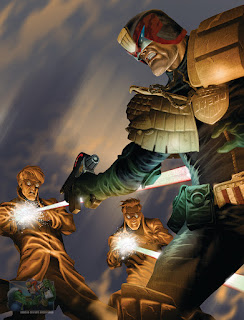 I apologise for the above pun, I think I may have hit a new low! Superstar Artdroid Richard Elson provides us with this action-packed finale to the Breaking Bud series which sees Dredd up against the mysterious agents of the Time Buraeu. Hmmm, I wonder if John Wagner has plans for these meddling agents in future...?
Richard was kind enough to send sketches and the story behind the cover. Over to Richard "I sent over three sketches based on Tharg's original brief, as shown below..." I love that little montage, it's like a mini comic strip in itself or the Slo-mo drug den bust from the Dredd movie! ﻿ 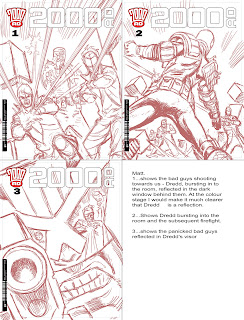 Sketch 2 - Gaze into the arse of Dredd!
"Tharg asked for a modification of the idea in rough 2 - where we could see Dredd's face in a three quarter view. I submitted a revised rough, which was given the go-ahead." 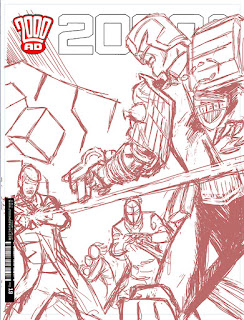 The annual Megacity One water fight.
"I scaled the sketch up to begin painting, but was pretty dissatisfied with the Dredd figure as a starting point, so redrew it."﻿ 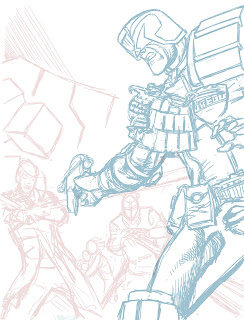 Enter the boys in blue!
"I have occasionally experimented with full digital painting and it has never really worked out, but I wanted to give it another shot. Still worried about the strength of the Dredd figure I concentrated on that first and ended up pretty much finishing it before had I even touched the rest of the image." I love all the textures on here...﻿ 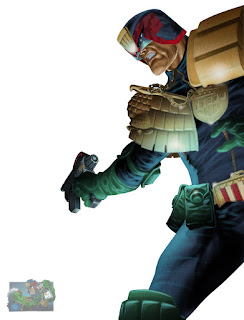 Good old Dreddy, you can see he leans his teeth twice a day.
"I then filled in the background figures, adjusted the lighting on Dredd, and sent the page off for comments..." 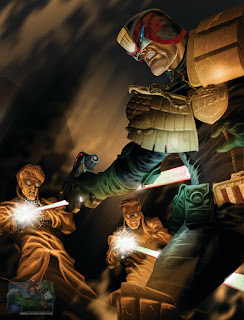 A shot in the dark!


"Tharg asked me to lighten the background, so that is what you see on the finished cover!"

Just look at those blingging bracelets!
And here's how the cover looks on your Progshelf, tremendous!﻿ 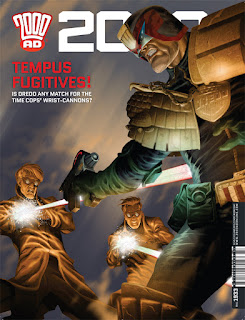 By 2137 the Apple Watch will do all sorts!
Huge, huge thanks to Richard for taking time out of his busy schedule to send the images and text for this explosive cover!
Posted by Pete Wells at 13:38