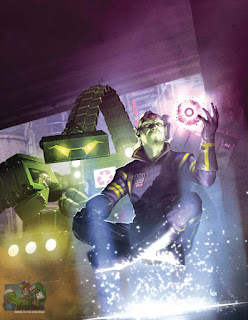 Not many people know this, but the Mighty One suffers from terrible, terrible piles. In fact, they're so bad, he can't sit down and has to levitate. Surprising then, that Mek Quake of all erm... people, was kind enough to treat the Mighty One to a lovely new purple pile cushion. A heart warming image captured by amazing artdroid Alex Rona...

Right, take 2! Tremble Earthlets, as intrepid artist Alex Ronald goes undercover to give us a revealing expose of disgusting working conditions in the Nerve Centre. Zero hours contracts, Rigellion Hotshots and he constant threat of Mek Quake. Ian Duncan Smith would be proud!

I absolutely adore this cover, it's genius! That Tharg is perfect and you can't beat the ABC Warriors! Mek Quake looks absolutely terrifying here! I would give my right arm to see Alex provide the art on a Meknificent Seven strip.

Over to Alex to tell us about the creation of this cosmic cover "Tharg gave me three options for this one, Tharg controlling electricity bolts, whipping the droids or standing with Mek Quake. Much as option two appealed to my twisted mind I chose option 3 and the chance to do a second ABC warrior after January's Savage cover..."

Here is that wonderful cover for those of you with sort memories... 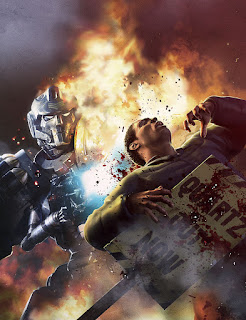 Alex continues "First draft had him with a hologram of the 2000ad logo providing some nice up lighting. I dropped this idea because it would have effectively created three logos on the cover and the pose wasn't overly inspired."﻿ 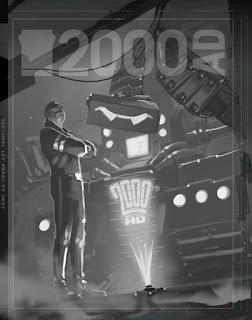 Tharg's rubbish firework put him in a  right old huff.

"After a rummage through past progs I found a nice image by Carlos of Tharg cross legged and levitating above London. This provided the pose I needed to make the image a bit more special." 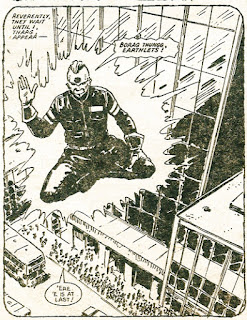 ﻿
"Quaequam Blag! Burt has been messing with the teleport controls again!" 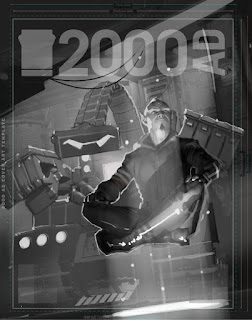 Mek-Quake loved his Tharg toy.
"I created both Tharg and Mek Quake within Z Brush and blocked in some background details using custom made and library props."

"These 3D parts are then exported into another package for assembly." 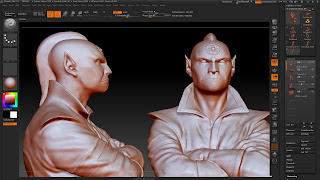 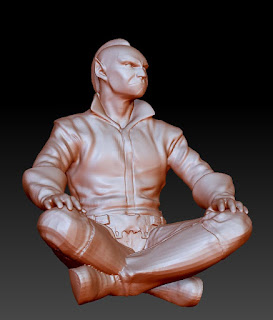 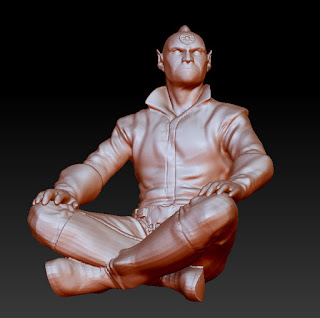 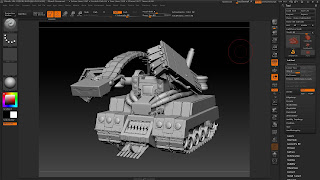 "Once the scene is composed and camera angle locked down, the elements are saved out as separate layers for painting in Photoshop."

﻿
Tharg coughed up the mother of hairballs...

"Originally I had the idea of some Thrill suckers  in there too and built one in 3D, but dropped it because it may have over cluttered the image slightly." 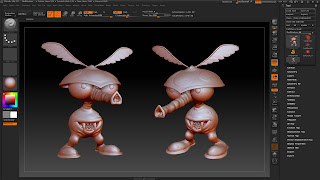 ﻿
Looks like Alex needs to update his antivirus software...

Tharg was chuffed with his raspberry doughnut!
And here's how the cover looks in your local thrillmerchant! Love that Betelgeusian green logo, brilliant.  ﻿ 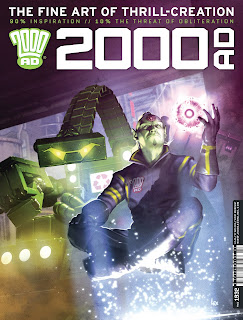 Tharg holds the recently removed sphincter muscle of an underperforming droid...
Another huge, huge thanks to Alex for his continued support with the blog. As ever, it's a great write up and every image is mind blowing, great! I'm sure this is going to be another contender for cover of the year, it's glorious! Be sure to check out Alex's blog for more goodies!﻿
﻿
Posted by Pete Wells at 15:38