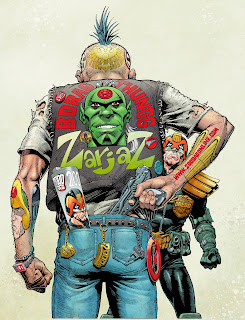 Do you know just why Cliff Robinson is the best in the business? Because, after a staggering ninety three covers for Tharg's mighty organ, he still manages to come up with fresh and inventive ideas like this one. Once again, Punks Rule as Dredd faces off against a 2000AD squaxx, resplendent in 2000AD finery!

Other notable additions to the painting are his badges, tats (Ezquerra Alpha, Death, Dante's biocrest, 2000ADOnline, the eagle of justice and the seminal SD and GI logos.) The image is topped off with the glorious Space Spinner, brilliant!

As it was my birthday on Saturday, Cliff was kind enough to send me this picture of his arse. It was only later that I realised it was the reference photo for the cover, the title of which is 'A Bad Influence.'  'Bad Flatulence' more like... 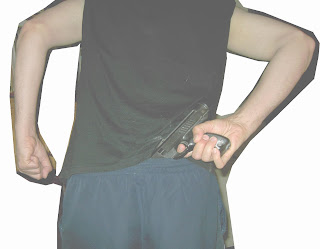 Here's Cliff's rough for the cover, I just love the clever composition... 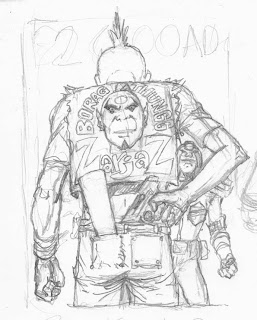 The perp meant to swat the radfly on Dredd's helmet with the comic, unfortunately he used the wrong hand...

Below the pencils start to take shape, note the Dredd figure, Cliff says "Dredd's helmet and badge were swiped from an earlier picture. Waste not, want not, particularly if it saves a little time!" Disgusting! I say Tharg should dock the Robinson droid's oil rations! 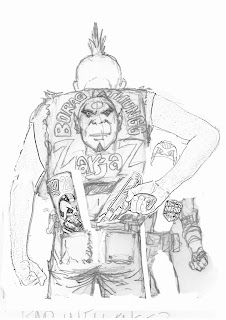 Dredd has a bad case of the Jigsaw Disease...

And here are Cliff's stunning inks which, as ever, are outstanding. Give that droid an oil-raise I say! 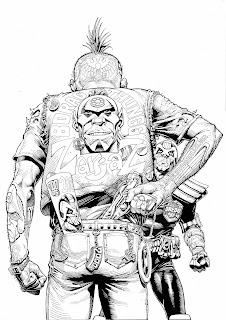 With the image completed, it is whisked to the brilliant Dylan Teague who has the unenviable job of doing it justice with his colours. Naturally, Dylan did an exceptional job; he's been colouring Cliff's covers since Prog 1698 and the pair seem to have a real synergy.

Here's how the cover looks on the shelf of your local thrill merchant. Well done and congratulations to Violet's new dad Pye Parr on a top job! 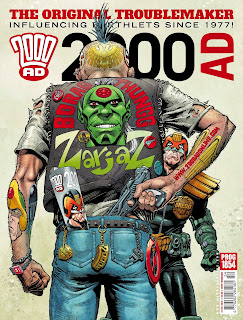 The Filth and the Fury

While I'm raving about Cliff and Dylan, here is the 'clean' image of the brilliant 'Faceboot' cover of Prog 1847. Cliff has promised me the roughs etc. 'before Hell freezes over.' More news when I get it! 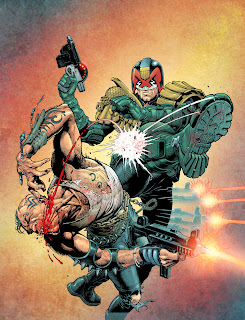 Gaze into the boot of Dredd

Many, many thanks to Cliff and Dylan for these wonderful, wonderful images. Certainly a fans' cover and contender for cover of the year?
Posted by Pete Wells at 16:43