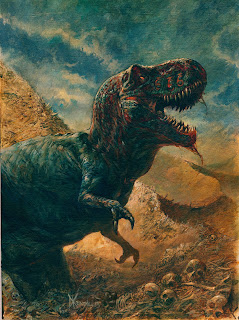 Good Grud what a cover! I know that my eight year old self (and forty year old self for that matter) would be grabbing this off the shelf instantly, it's brilliant! Beautifully painted by Dave Kendell (who brought us that stunning Slaine poster a few weeks' back,) it shows Gorehead in all his terrifying splendour! Over to Dave to tell us more...

"I started off the job like I do most commissions, doodling sketches in my sketchbook. Although I used to draw dinosaurs all the time in my childhood, I'd not done any prehistoric beasties for a long while. The sketches were really a means of familiarising myself with current thinking on T-Rex anatomy. They had gone from lumbering beasts to animals with the grace of a running ostrich. " 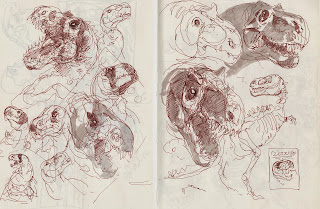 The front row of the Tory party conference. 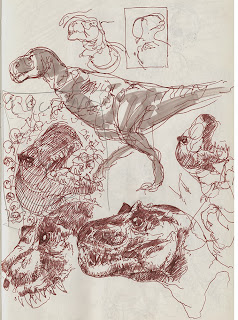 Everybody walk the dinosaur!

"After a couple of pages I felt I was getting into the stride of the beast. I was checking James McKay's drawings for clues to Goreheads personality."

"I started producing digital sketches.  The first approaches centred pretty closely on Goreheads head. My first idea was a symbolic shot of the jaws pushing up through a bone pile..." 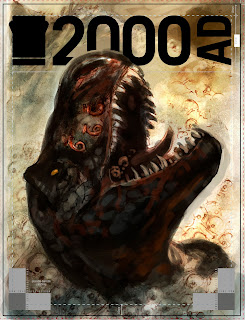 "The bone desert became important in the final piece. I did a couple of mood pieces with Gorehead looking mean and moody under a stormy sky." 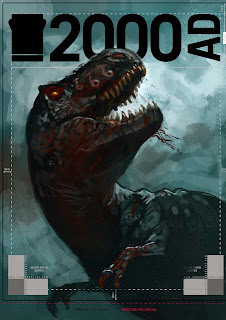 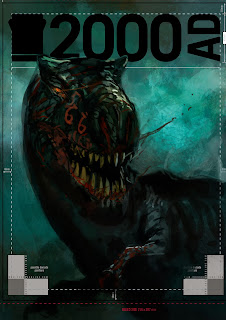 "Gorehead's killer smile was a hit with the ladies."

"The final image was a very quick piece suggested by my partner. She suggested I widen the shot and have a full body shot of him churning through a bone desert. This was the image Tharg chose..." 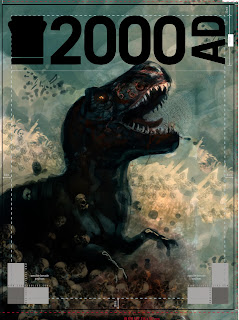 Someone stole Gorehead's piano as he was playing it!

"I refined the image and pencilled it up..." 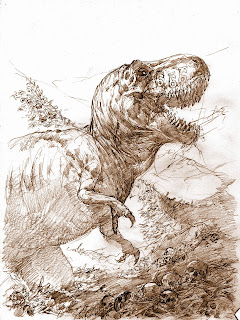 I challenge you to find better pencils than these.

"I transferred it to board and then painted the beast. One of my favourite films when I was young was the dinosaur film, Valley of the Gwangi. The desert setting inspired the lighting and mood of the final painting. It was still feeling a little too clean so I washed a burnt sienna over the final image. This gave it a slightly grungy, dirtied feel."

"On Pat Mills suggestion I added a rangers hat on one of the skulls. Whether this is hidden by type I am yet to see..."

Well, the good news is the hat made it, the bad news is the skull didn't! Still, that burnt orange text goes wonderfully with the colour scheme of the painting. 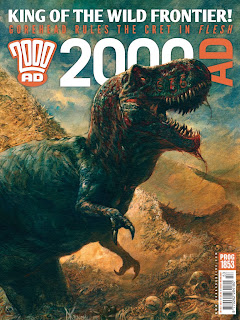 Thank you SO much to Dave for sending the images and text, I've waited a long time for this cover to see print, it's absolutely superb! Please visit Dave's site here!
Posted by Pete Wells at 12:23