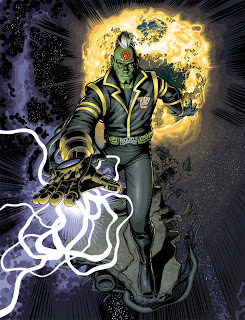 Rejoice Earthlets as the bumper, end of year Prog is upon us in the form of Prog 2013! This year, the mighty Tharg has bestowed the honour of Cover Artist to the fantastic Edmund Bagwell, who has decided to melt our eyeballs with this explosive masterpiece!

Edmund was kind enough to send some bits and bobs to let us see how the cover was put together. In terms of the brief, Edmund said "Tharg wanted a portrait of him in a cosmic setting..."

Below is the sketch he came up with. Great news for those ordering the Prog digitally this year, it comes with special bonus content including the pencils and layouts of various pages including the cover. Cool idea Tharg! 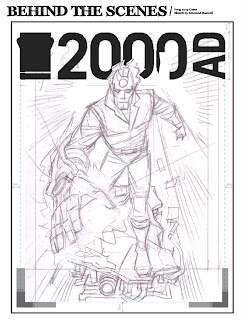 Bonus content from the digital Prog!
The cover image itself is born of a little confusion. When I'd contacted Edmund, I'd mistakenly congratulated him on getting the cover gig for Prog 2012. He said "Like you, even though the issue is numbered 2013 I kept thinking of it as being the 2012 year end special and so that's where the exploding earth came from."

Cue those wonderfully dazzling Kirby-esque inks for the cover, wow... 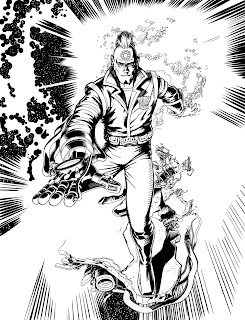 Finally here is the stunning finished image. As well as embracing the new, Edmund tips his talented hat to legends of 2000AD's glorious past, saying "The Cosmic Claw and debris board was a nod to Dave Gibbons and 2000ad's past."

How very Dare you!?!

And here's how the design bot put the cover together, feel that thrill power crackling! 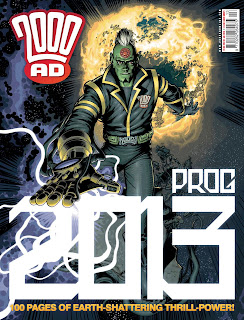 Thanks ever so much to Edmund for giving his time and support. Merry Christmas to him and all the fine readers of this blog!