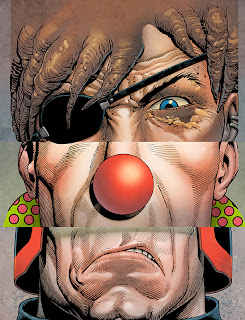 To round off the year, here is Cliff Robinson and Dylan Teague's frankly (no pun intended) disturbing cover of the brilliant Prog 1812. As you'll all know by now, this historic prog featured the thrilling climax of the Dredd, Lowlife and Simping Detective strips in a single, game changing story, Trifecta. I don't mind telling you, this cover freaks me out! The reason being that Frank's eye patch and Jack's nose remind me of The Who's Tommy album, which absolutely scared the shit out of me as a kid! 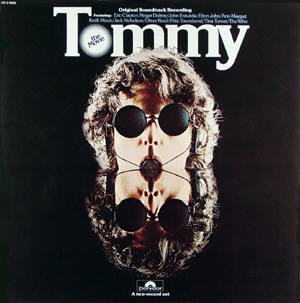 ﻿Pinboing Wizard?
Before we get to Cliff and Dylan, we need to hear from 2000AD design droid Simon Parr. It seems initially, this wasn't meant to be a cover at all; over to Pye to find out more. "The cover concept was originally an idea for the Cold Deck Teaser campaign that I came up with when me and Molcher were knocking ideas around, but we ditched it cos it was too spoilery right out the bag. Matt kind of liked it though so we got Cliff to draw it up as a cover instead. He did a great job too (as ever), it's really bizarrely jarring."

The effect Simon was going for was "kind of like a game of consequences where you fold the top down and someone else adds to a picture you started so you end up with a weird final image." I loved that game!

Below is Simon's concept sketch, which was sent to the mighty Robinson droid...
﻿
. 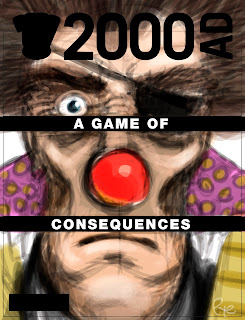 A game of consequences!

So here are Cliff's pencils, with a handy guide to help with the final layout of the cover...
﻿ 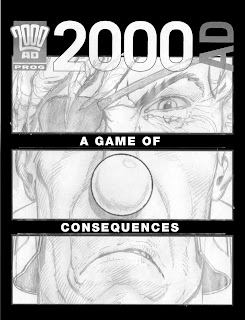 The scruff, the bluff and the tough.

And here's the line art - please, just spend a few minutes soaking up the detail, incredible!


I love Dredd's sneer, it's like he's disgusted to be part of the image!

And here's the artwork in all it's glory, yikes! 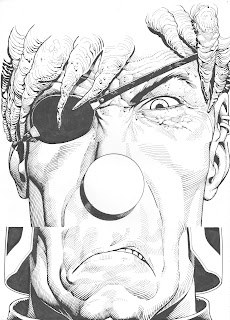 Once the artwork was completed, it was sent to Cliff's colouring partner, Dylan Teague, to work his considerable magic upon. He certainly didn't let us down!

I love how grimy Dylan has made Frank!

And here's how the prog looked once it had gone full circle back to Simon Parr, wowzers! 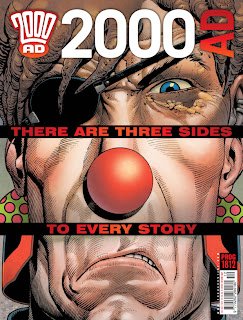 Thanks to Simon and Cliff for the images, I'll be cursing the both of you when I have nightmares tonight!
Posted by Pete Wells at 15:02