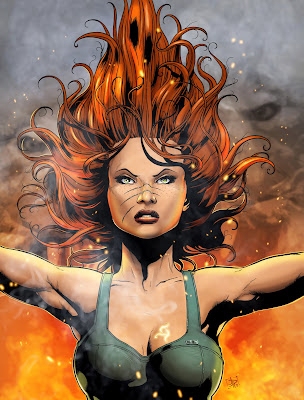 BRA-vo for the wonderful Jon Davis-Hunt who brings us the eye popping cover for Prog 1777! The cover shows Rowan performing her magic and it certainly has me spellbound! I adore the wolves' features in the background too, something I totally missed in the printed version of this terrific cover.
Over to Jon who, as ever, has kindly sent a fascinating breakdown of his creative process...
"This was the initial sketch I sent to Tharg. As you can see, it's VERY quick and basic. I tend to do a few really quick thumbnails like this, then pick the one I like and throw on some colour very quickly in Photoshop, just to get the rough subject and composition locked down. I have to thank Tharg right away for allowing me to send him such loose roughs, normally accompanied by a paragraph or two where I tell him to ignore how bad the rough is and that the final image will be much better..." 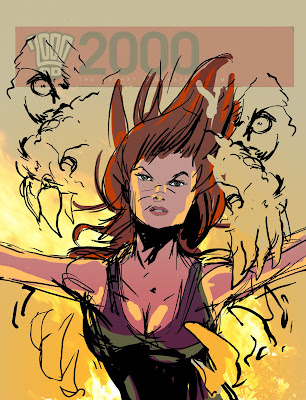 "Next up, I move to a better sketch, where I actually try and rough the image out in proportion and scale. I still keep this quite loose. One of the advantages of inking my own work is, I know how much information I need to get down before moving onto the inking stage - which is usually a lot less than if I was relying on someone else to ink my work for me.
In the first thumbnail, I'd thought maybe that Rowan would be kind of writhing in the smoke, but when I came to sketch it out here, I decided instead to go for a much simpler, static pose as I wanted to crop the camera closer and focus more on her face and hair in particular. Once I drew it out like this, I also realised it reminded me of the famous Jim Morrison Doors photo which I must have basically subconsciously ripped off. : )" 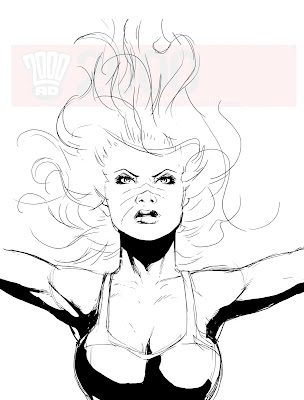 "Inking time. I spent quite a bit of time here on the hair, which I wanted to mimic the fire and flames of the background (although I later decided to blur those out). I enjoy the inking phase probably the most. With all the major decisions done with the initial sketch, the inking bit is where you can really refine the image and bring it to life." 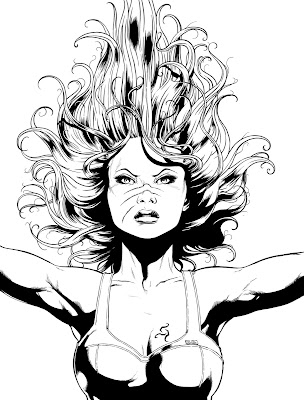 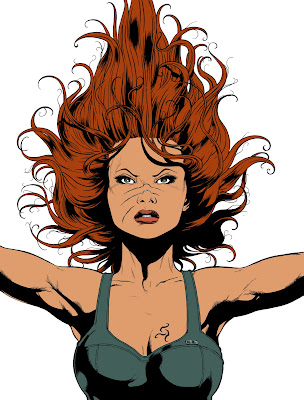 "Followed by all the tones and shadows." The image below is amazing - Pete. 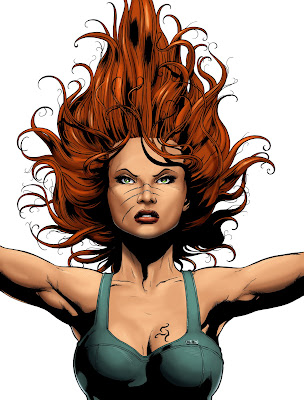 "Then I added in the background. I did a quite rough sketch of a wolf's head and then messed around with it in Photoshop until it began to look 'smoky'. I then drew in bits of smoke over the background image and then over the actual Inked image of Rowan. To do this, I simply used a hard edged brush, set the opacity to about 75% and then kept drawing in wavy lines and blurring them slightly. I'd then draw over the blurred line and blur again and just repeat until I had what looked like smoke, rising up from the background and Rowans rune tattoo."
As I said above, I missed the werewolf features on the printed cover, so hurrah for the blog! - Pete. 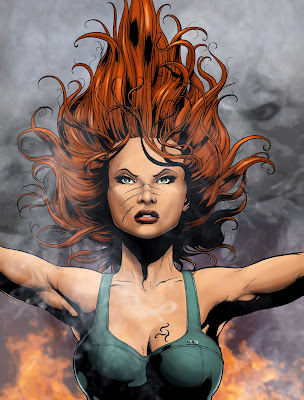 "I then lit the image, again in Photoshop to get the warm glow of the fire. I added in some glowing embers too."

"And finally, the amazing Mr Pye spent ages setting the type and adjusting the image (including painstakingly cutting round the various bits of hair) so that the final cover really came together." 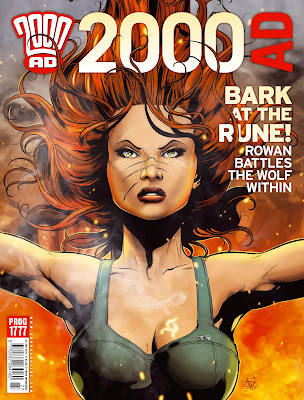 And there we have it. A brilliant, brilliant cover by an artist who goes from strength to strength! As a bonus, here is a panel from this weeks' strip which introduces a very special shop 'Pete's Welle Nice Burger Emporium', according to Jon, it's going to appear in one episode of every strip he does as a little Easter Egg. Wahooooooooooooooooooooooooohhhhhhh! 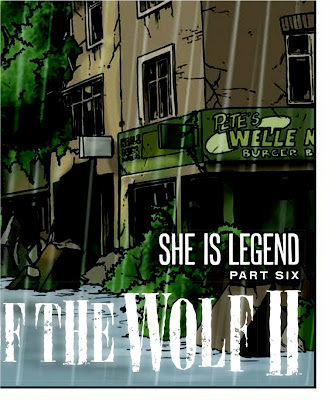 Thanks to Jon for the brilliant, brilliant images and for the wonderful surprise in this weeks' prog, I'm Welle chuffed!
Posted by Pete Wells at 10:12