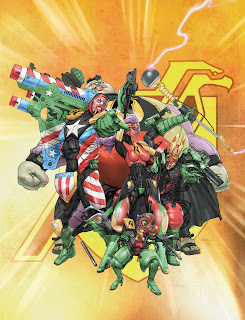 Bonus points if anyone can place the quote above.


When I saw this brilliant cover for the current edition of the Megazine I was gobsmacked. I pride myself on being able to instantly identify cover artists but this one eluded me; "Must be a new guy," I thought. I was blown away when I discovered it was friend of the blog, Mark Harrison! What an incredible departure from his usual style(s)!


"The Adjudicators job was an interesting one as not only was I doing the cover, but I was also coming up with the design for the characters, based on a brief outline from Simon Spurriur, the writer. About half way through the job I got a message from Matt that Carlos needed the cover to work from as he had already started the strip- he's mucho fast, Carlos. Slow down I say, take it Major Easy, Carlos! ;)" (Ha ha! - Pete.)

I quickly assembled a line up for his to work from and tried not to deviate too much from it in the final piece."

"Right away I got the joke and thought we should keep it as close to the obvious source material, but not so close as to be "actionable". So that meant adopting an American line art comic style and colouring and giving it a look that wouldn't have looked out of place on a cover for DC, Marvel, etc.


The conceit of the cover was that the Adjudicators were some sort of vigilante crime fighting team striking a typical group pose, only they were crap. The costumes had to look a bit cheesy, with elements of famous superheroes about them, but also keeping the theme of a Judges uniform in there (I gather they are an unofficial superhero Judge squad?) So this meant a bit of black red and green padding.


The pose was tricky. It had to look superhero but badly done. Typically when superheroes gather for a group shot everyone gets fair coverage, is posed and balanced to look dynamic and organised and integrated. Not so the Adjudicators. I had them crowding each other, blocking each others pose, stepping into each others personal space, fumbling  and generally looking like a team scrum rather than a power pose.  I posed myself for the main male figures, my crutch (I was on crutches at the time after a nasty fall) acting as a prop for the Thor-like character. I worked on the characters as separate elements to be composited later into the final piece."


Mark continues "For ref on the superheroes I tried to find some typical clichés and requisite items and looked at Marshal Law for Kev O'Neill's take on cossies. I think General Meg's Cod piece is a nod to that outlandish satire of Mills and O'Neill. Overcompensating for something!


Whilst the majority of line art was done in Painter (which has better, more responsive brushes and pens for such things) I also experimented with custom brushes in PhotoShop for the more mechanical aspects. I've pretty much moved over entirely to PhotoShop, and aside from a very scrappy pen sketch, this piece was entirely digital, no hybrid work.

"My fave bit of detail was the "Judge E 7000" gun. Kids of the 60's may recall the "Johnny Seven" gun which was the must-have toy of it's day. I was about 4 when I got one; damned thing stood taller than me! I based General Meg's gun on that, complete with top loading grenade launcher (that probably also shot about 6 feet and killed yourself if you used it!)" 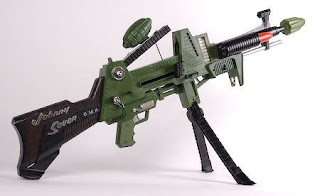 Man, why don't we have toys like this anymore?

In conclusion, Mark comments on this radical change of style "So there you have it! Hope it's of use to you. Looking at the last few covers, all different, it must be difficult for people to know what my style actually is. Note to self: must settle on one art style!"

I disagree! What makes Mark such an exciting artist is the range of styles he's adopted over the years, as well as his clever use of technology to give amazing results!

So, yet again, a huuuuuuge thanks to Mark for sending another fascinating, very detailed breakdown of a brilliant cover. Designing characters for the man who gave us Dredd and Johnny, eh? I wonder how many people can say they've done that!?!