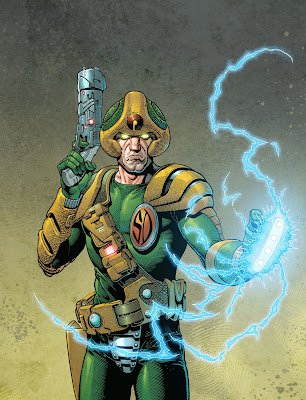 Cliff Robinson is back with his seventh* scrotnig Strontium Dog cover. The image shows our favourite bounty hunter getting all tooled up, ready to go on a job to find out who's trying to kill him (again!)
Cliff says "Here are a few bits'n'bobs 'n' odds'n'sods, the files include a few abandoned ideas..."
The first of those abandoned ideas, which I absolutely love, is this excellent close up of a rather angry Johnny giving the reader a face full of Electronux! 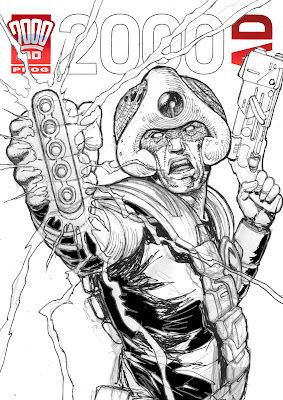 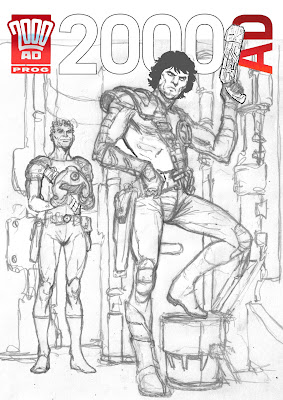 A different approach was decided upon and Cliff went on to ink this version of the cover which, quote "Neither Tharg nor myself cared for very much..." 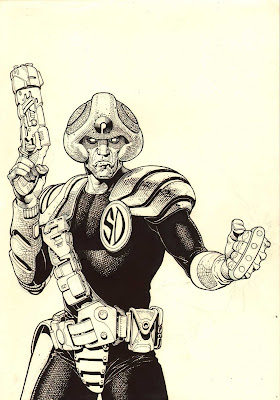 The eagle eyed among you will notice on this version that Cliff has made the right arm bigger and moved Johnny's trademark Westinghouse blaster... 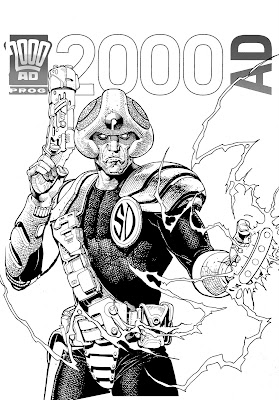 Ever the professional, Cliff went back and re-inked virtually the whole image. He says "As you can see, for the finished cover I scavenged bits I liked from the original inked version. Waste not, want not!" 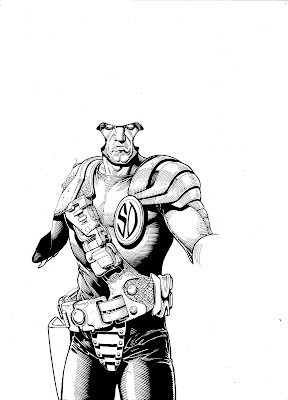 Below we can see how the physical artwork looks today. Cliff continues "I'll go back and finish the inks properly one day, particularly if anyone should want to buy the original (hint, hint!)" 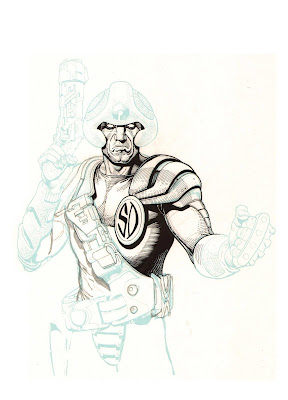 It seems that at some point McNulty was going to make it back onto the cover though this seems to have been abandoned for a more iconic image... 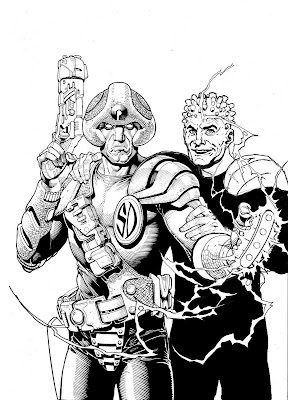 Once Cliff and Tharg were happy with the inks, the image was whisked off through an inter-dimensional portal to wunder colourist Dylan Teague who really made the image pop. Cliff is delighted with the job Dylan has done, he says "Please give Dylan a big mention, I think he's made my drawing look better than it deserves to be!"

Thanks, as ever, to the brilliant Cliff for sending the images. He had a hectic weekend but still took time out to find these 'bits and bobs' for us. A genuinely lovely fella!
* Six Strony Prog covers and one Strony-themed Big Finish Audio cover.
EDIT - And finally thanks to the fantastic Dylan Teague for sending the final, coloured cover image. Another excellent cover from the dream team of Robinson and Teague!
Posted by Pete Wells at 23:51