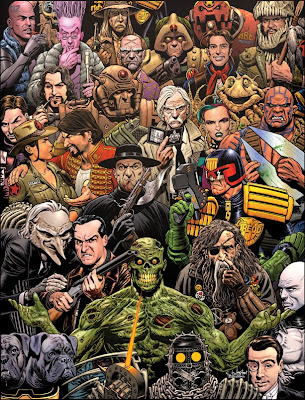 I've always had a huge respect for Chris Weston. Not just for his absolutely outstanding artwork (and in more recent years his excellent writing) but the fact that he's always been a very passionate, outspoken fan of 2000AD. I was delighted to receive these cover images from him today but it was his words that made me smile more.
Over to Chris "This cover sprung from a conversation I had with the artist Brian Bolland. I mentioned to him that I would like to see him draw a new, up-to-date version of his classic cover for the 2000ad Monthly US reprint comic. That was drawn way back in 1983... nearly thirty years ago!

Since then so many great new characters have appeared in the Prog's pages and I thought it would be a good idea to see Brian's take on them, using the same layout as his original page. Brian liked my idea, but suggested I should do it instead of him.

I filed the idea away, but it took another conversation with a different colleague to actually galvanise me into action. This fellow suggested that The Galaxy's Greatest Comic wasn't as good as it used to be. Now I wouldn't hit a man wearing rose-tinted spectacles , so instead I decided to channel my outrage into this drawing that showcased some of the more recent characters who have graced the pages of 2000ad. That unfortunately ruled out Nemesis and Rogue Trooper as I didn't want this to be a nostalgia piece; I wanted it to be a love-letter to the last few years of the comic's history, an era I think will be seen as a second golden age."

Hear, hear! The prog has been incredibly strong for as long as I can remember. A real testament to the creators and editorial team... 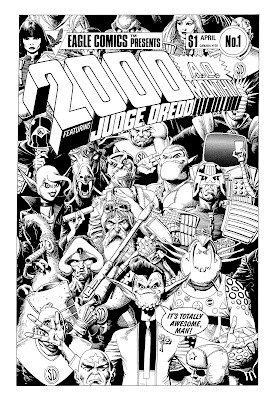 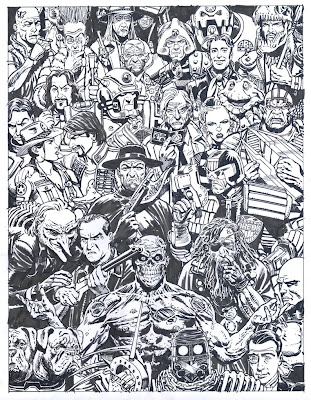 Chris' rage filled spec cover!
Chris Continues "A couple of notes: I took particular care to place the characters so that they would be seen through the "zeroes" of the 2000ad logo. My version of Bill savage does owe more to Jesus Blasco's original depiction rather than Patrick Goddard's but that's no slight on the current artist who I think is great... just me being a sad old fanboy. Look closely at Dirty Frank and you'll see he's wearing a Welsh Regiment badge, my little joke at Rob Williams' expense. Ampney Crucis was based on the actor Ian Carmichael, and I was thinking of John Hurt when I drew Harry Absolom." 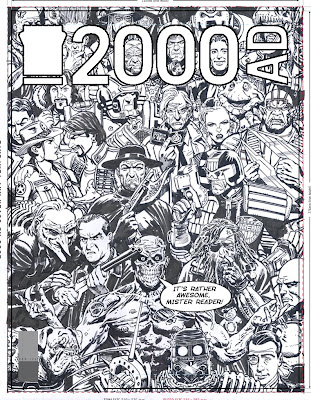 "I completed my rough version and sent it into Tharg "on spec". He seemed delighted with it. Only later did I discover it was going to be used as the cover for the 35th anniversary issue. I wanted this to be my own loving tribute to 2000ad and I am delighted it's been selected to grace the cover of such a landmark issue." So are we Chris!

"My only regret is i didn't make it a double-page spread and include some of the older characters like Rogue, Nemesis, Ro-Jaws, Sam Slade and Kano on the back cover. It did cross my mind but I talked myself out of it for economic reasons. I'll save that version for the 50th anniversary issue. With the way the years are flying by and the speed I draw at, I'd better get started...!" 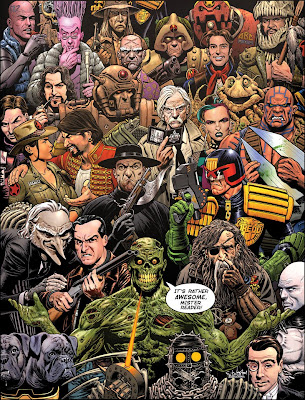 It's wonderful to hear a creator speaking so passionately about how good the comic is right now, I couldn't agree more with Chris' sentiments. Here's to another 35 zarjaz years!
Thanks a million to Chris for sending the amazing images and stirring words! Please visit his fabulous blog here!
Posted by Pete Wells at 13:35