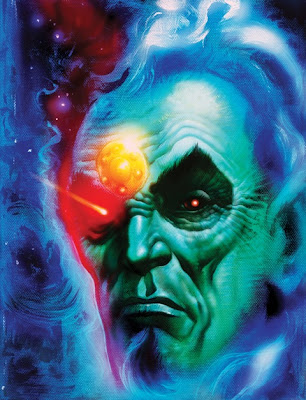 Behold the striking features of Tharg the Mighty, majestically brought to life by the amazing Liam Sharp! This stunning cover is for Prog 1740, one of Tharg's famed 'jumping on' progs, where each story is a first-parter to help new readers in their quest for thrill power!

This issue sees the beginning of a brand new Judge Dredd Tale 'The Dasterdly Deeds of PJ Maybe' where we find out what's next for the murderous ex-mayor of Mega City One. This herald's the return of John Wagner and Colin MacNeil to the prog which means we're in for a treat. Next up is Savage Book 7: 'Secret City' by Pat Mills and the excellent Patrick Goddard which continues Bill Savage's underground battle with the dirty Volgs! There's also the welcome return of everyone's favourite ultra-polite corpse Zombo, in the wonderfully titled 'The Day the Zombo Died' by the brilliant Al Ewing and mad-as-a-box-of-frogs Henry Flint. The issue also (hopefully) sees the return of Download's coolest hitmen Sinister Dexter as they continue their war against familiar enemies from other dimensions in the ominously titled 'Charon's Crossing' by Dan Abnett and Anthony Williams. Finally the prog will feature the mighty one's latest brainwave 3hrillers, these are three part, stand alone stories that don't expect the reader to know over thirty years of 2000AD history. The first of these tales is 'The Silver -Tongued Exploits of Cosmo Nibs' written by Tom Eglington and illustrated by the superb John McCrea who's work was last seen in the Prog seven years ago! All of these pulse pounding thrills are wrapped up in Liam's magnificent cover, exciting times indeed!

So let's get back to the all important matter of that magnificent cover! Liam said "This was a no-messing, straight to completion piece. I didn't do a rough of the mighty one (my eyes could only stand his aura for an extremely limited amount of time) and literally went straight to the canvas, painting shadows and highlights over a gold acrylic primed surface."

And here it is, impressive eh? 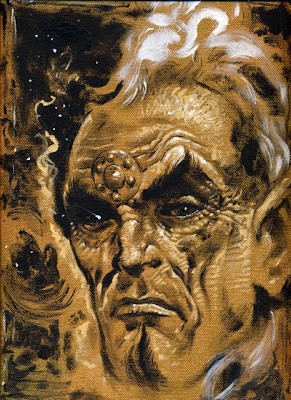 Next Liam adds some digital magic, he continues "From that I imported the image into my computer on my scanner and set about working up the full colour version in Photoshop. Here's the result!"

And finally the image with 2000AD template, which Liam used to get an idea of how the final product will look... 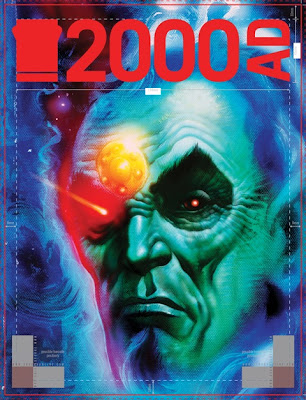 Thanks a million to Liam for sending the images, it's great to see Tharg on the cover again and fantastic that it's by such a comics legend!
Posted by Pete Wells at 12:18