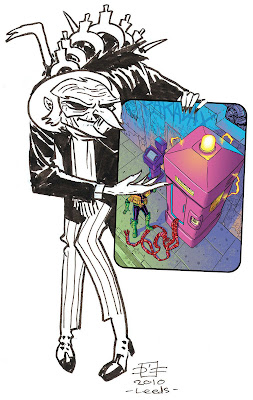 Oh no! The Victorian Kingpin of Crime, sneaky old Stickleback himself, has stolen D'Israeli's latest blog post and has posted it here! His crafty gang also lifted extensive notes detailing each stage of the creative process, what a bunch of cads!

The notes, beleived to be written by the artist begin "This was my first cover drawn in Manga Studio... for a Judge Dredd story drawn by 2000AD titan Brendan McCarthy, so I've got a lot to live up to!"

Indeed he did, McCarthy made his debut in the galaxy's greatest comic way back in Prog 82 (September 1978) and quickly became one of 2000AD's most respected, creative and daring artists.

Matt continues "Below are the original roughs I sent to Tharg. The brief was "Dredd rapping on the doors of the public loo, with maybe a Tom Baker-style scarf sticking out from the bottom of the door". I did the first two without reference, which is why it's the wrong kind of loo (also the old 2000AD cover grid). Tharg sent me some reference and I produced three, which was okayed."

Next we have roughs... 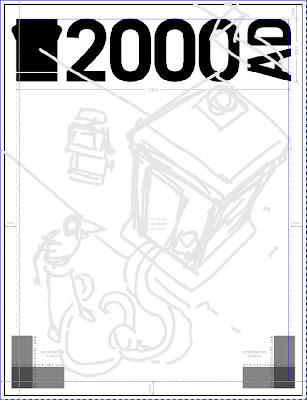 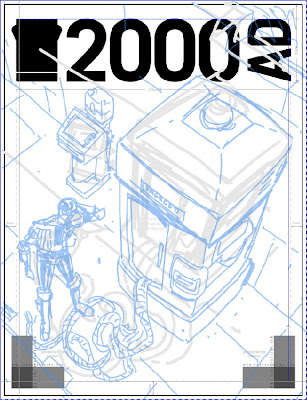 "Below are the tidied-up working rough pencils, with perspective and Dredd's anatomy tightened up. I use a pink colour for stuff that has required a second pass - for example, I draw Dredd by doing the outlines of his figure first in blue, then adding all the pads and eagles in pink - if they were the same colour the drawing would get lost in places."

One of the joys of D'Israeli's work is seeing how he uses technology to enhance his already formidable skills. He says "The loo, the wall and the console were all plotted out using Manga Studio's Perspective Rulers tool - this forces drawing tools to run only along perspective lines, which makes roughing out objects in perspective an absolute doddle." 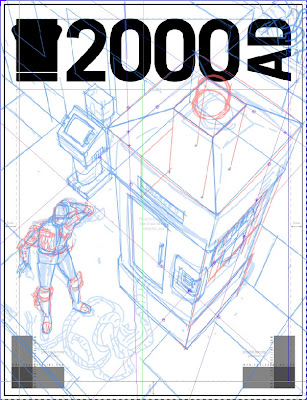 Next we have the 'pencils' stage "I only add finished "pencil" drawing to the figure, since the background is already plotted out nicely and there's no point in duplicating work. Note the grid (build using Manga Studio's "Vanishing Points" filter) which is a handy guide for freehand drawing in perspective. I made the "Mega City Public Restroom" sign on its own layer, copied it and distorted it to fit the side of the loo. (Note: this job was the last I drew using my old copy of Manga Studio EX 3, which had trouble managing the distortion, so I exported the sign and distorted it in Photoshop. I've since upgraded to Manga Studio 4 which is much happier with this sort of thing.)" 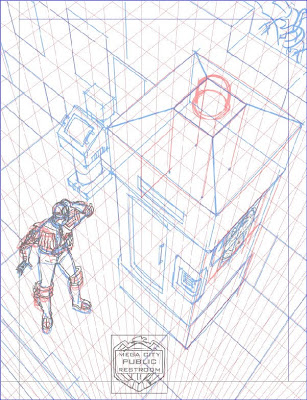 Next the image is inked in D'Israeli's distinctive style; "I like to ink everything freehand to keep a slightly looser, hand-drawn look. I added very slight curves to the edges of the loo, to make it look a little more rounded - Brendan's design looks as if it's made from moulded plastic..." 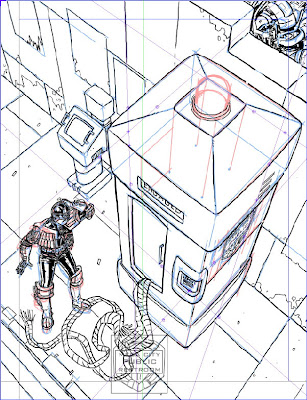 "The inks on their own, including "colour holds" (coloured outlines). From here I export the drawing from Manga Studio in Photoshop format." 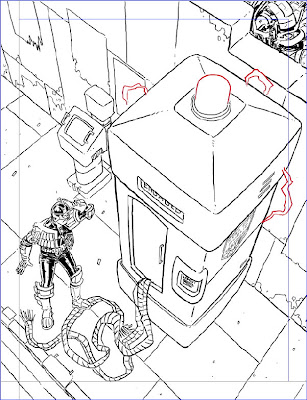 Time to start adding colour - I certainly don't envy Matt having to contend with McCarthy's insane use of colour! The artist says "Flat colouring in Photoshop. Brendan McCarthy's colours for the strip are really psychedelic, so I'm trying to follow that while making something that looks pleasing to the eye. I set up a series of purple mid-tones that I can work off with other colours..." 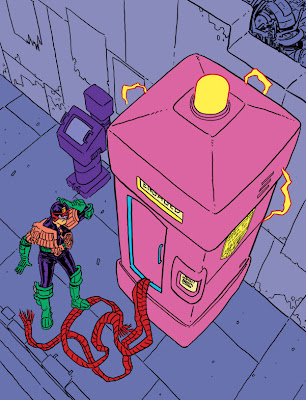 "Next shading, added on its own layer in pale violet, using Multiply mode - this is like adding a transparent wash." 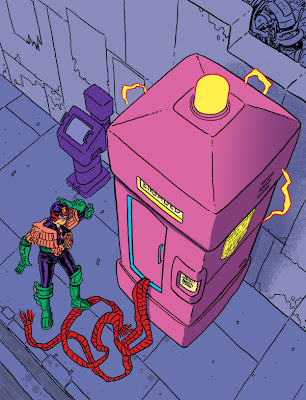 Next we see further evidence (as if needed!) of D'Israeli's amazing sense of design, "Highlights 1 - now the colours are starting to pop! I'm adding opaque highlights on a new layer, then cutting into them with a Layer Mask to establish shadows. Brendan used a really strong cyan for the wall behind the loo. I can't handle that kind of contrast with the same aplomb, so I'm pushing the strong blue up the top of the frame where it'll back the 2000AD title block and hopefully push it forward..." 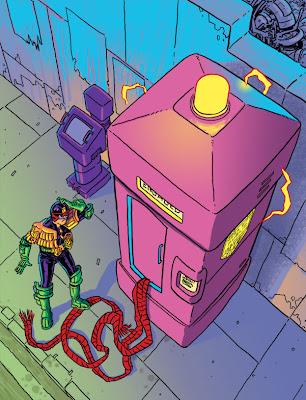 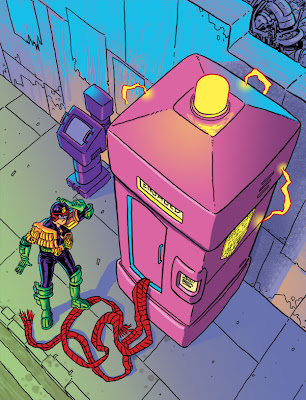 Off to computer program number three, Coral Painter, to help get that gritty D'Israeli finish we all know and love. "I make a copy of the file and open it in Corel Painter (which can handle Photoshop files so no need to convert). Painter has a load of useful texture brushes, which I use to break up the smooth Photoshop finish - Sponges to add texture to the pavement, Sargent Brush and Chalks to modify the texture on the wall, and Water Blender to just tweak the edges of the shadows on the loo. I also added a few more colours to the scarf." 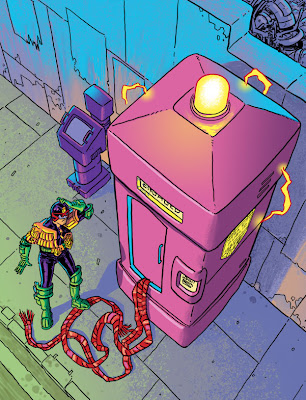 Adding the Fishpaste! To add a thoughtful finishing touch to the piece, D'Israeli adds some very special graffiti "Back in Photoshop, I use a layer set to "Multiply" to add graffiti to the back wall and "gum-spots" to the pavement. Except for my trademark "fishpaste," all the graffiti relates to work by Brendan McCarthy." 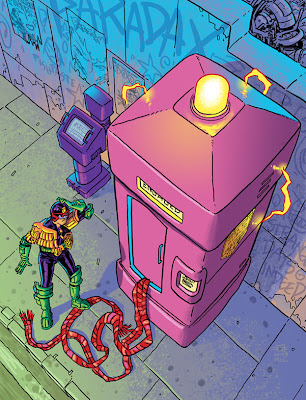 Below is a 'sketch' that Matt for me at the brilliant Thought Bubble in Leeds last weekend. I asked him for Stickleback doing something for this blog so he drew the image below with a space to add a cover. The cover in the sketch was obviously disproportionate to a standard 2000AD cover but D'Israeli was kind enough to correct this on a scan I'd sent him... 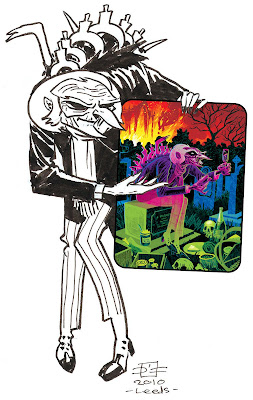 Also, as is customary for keen photographer D'Israeli, he took pictures of his sketches and sketchees for his own blog. For mine, I tried to ape the pose of Stickleback from the sketch then had the idea of making a never ending optical illusion by repeating the photo over and over in the sketch. Again Matt was kind enough to take my shoddy version of it and correct it. A fine, fine fellow indeed! 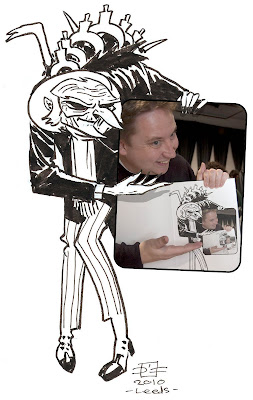 So, thanks a million to Matt for being so unbelievably kind in leaving so many fantastic images and such a fascinating commentary lying around for Sticklebacks gang to steal! On a personal level, I'd also like to thank him for being kind enough to fix my sketch and being such a nice chap when I met him. He really is D'best!