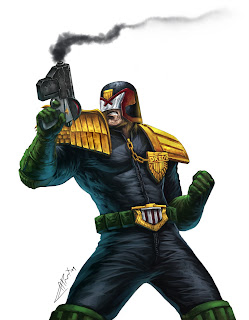 Early next year sees the release of Mongoose Publishing's Mega City Archives. These fact-filled books will lift the lid on all aspects of Mega City life from the inner workings of the Justice Department to the diabolical elements of the criminal underworld. Though Mongoose is perhaps best known as a company specialising in role playing games, it's worth noting that these books aren't aimed at the roleplaying market but 2000AD fans in general. They are information tomes in their own right, so no squaxx should be without 'em!

The cover above is by Patrick Reinemann and is for Volume 1: The Justice Department, this will be released in January 2010. The two covers below are for Volume 2: Lawbringers which will explore Dredd and the Justice Dept. and Volume 3: Lawbreakers which looks at our favourite villains of the future. Both covers were by Angga Satriohadi and the books will be released in February and March 2010. 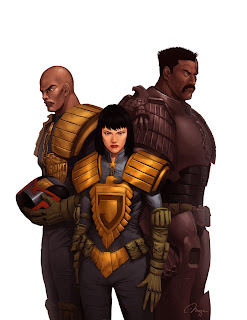 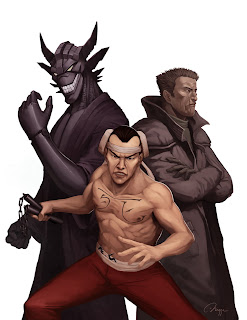 However, if Role Playing is your thing then Mongoose also have released some 2000AD related games. Below we see the fantastic covers for the Judge Dredd and Strontium Dog games by friend of the blog, Neil Roberts. Both covers feature a host of characters from both universes, so have fun playing 'Name That Perp' and 'Spot The Stront!' 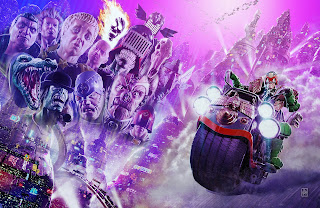 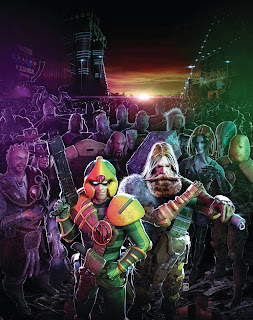 Thanks to Will Chapman for sorting me out with the covers and to Mongoose Publishing for giving their kind permission to show them. You can find Mongoose's website here.
Posted by Pete Wells at 06:40