Carlos Ezquerra - Who the Hell's gonna mess with him? 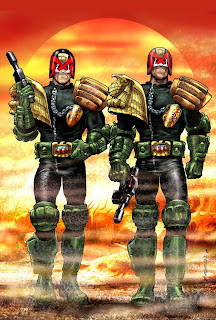 The cover, which accompanies the current Dredd Epic, depicts Dredd and his clone brother Rico (2) in an homage to the classic "Who the Hell's Gonna Mess With Us?" final page of the controversial Mega Epic, Judgement Day.

As well as the coloured version above, Carlos was kind enough to send me the inks, which you can see below. I've included a scan of the Judgement Day page just in case any readers haven't seen it, but also because it is one of the most wonderful pages ever printed in the Galaxy's Greatest! 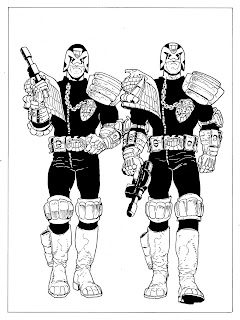 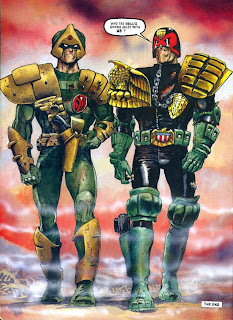 Carlos' British comics career began in the early 1972 (the year I was born!) where he drew strips such as Major Eazy, El Mestzo and The Rat Pack for Battle Picture Weekly. During the development of 2000AD he designed future Lawman Judge Dredd as well as much of the look and feel of Megacity One. A year later he designed the immensely popular characters from Strontium Dog for Starlord comic, which would soon find it's way into the pages of 2000AD.

Since then, Carlos is credited with designing a host of popular characters and strips such as Durham Red, the wonderful Al's Baby, Fiends of the Eastern Front, Bloody Mary, The Rifle Brigade and Just A Pilgrim. Below we can see some of his more famous creations... 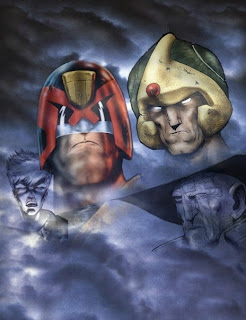 Below we have Carlos' first ever 2000AD cover, Prog 4, which shows a minor character from Dan Dare being 'crushed to a dot' by the gravity of Jupiter! Following that we have a painted cover for Prog 118 depicting the popular Strontium Dog strip Journey To Hell. Beneath that is the cover of Prog 124 showing alien assassin Kil-Gor who we learn was sent by the Dictators of Zrag to kill Tharg!

The latter covers both feature Ezquerra's trademark dotted outlines, something fondly remembered that featured heavily in his work for decades!

EDIT - Carlos tells me he didn't do the cover of Prog 4, apologies to all! 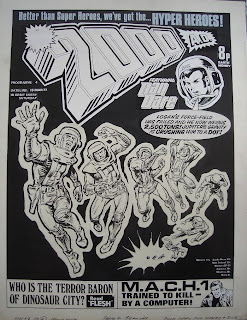 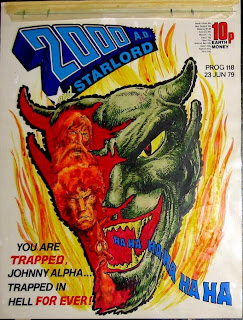 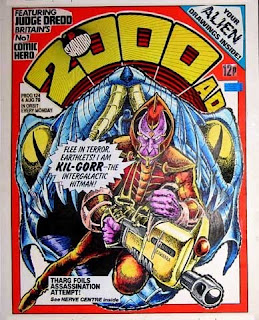 Below is a cover for The Stainless Steel Rat. The story was adapted from a set of novels by Harry Harrison and spawned three adventures for the James Coburn-a-like conman, all illustrated by Ezquerra. 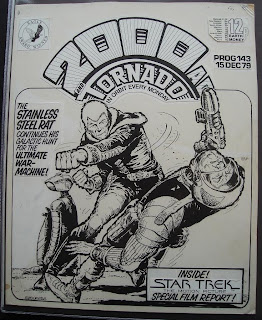 There are few 2000AD artists that can boast that they have drawn entire Dredd Mega Epics, however Carlos can claim to have single handedly completed at least a staggering six (The Apocalypse War, Necropolis, Purgatory & Judgement Day, Tenth Planet and Wilderlands, Helter Skelter (minus two episodes) and Origins!) Add to this his numerous mini-epics (Beyond the Call of Duty, Sector House, etc.) and dozens of one off and multi-part stories and you have an amazing body of work...

Below we have an Apocalypse War cover and three covers from Destiny's Angels (the covers are numbered 284, 286 and 288.) It is almost inconceivable today that artist would provide three covers in six weeks as well as fifty pages of strip - wow! 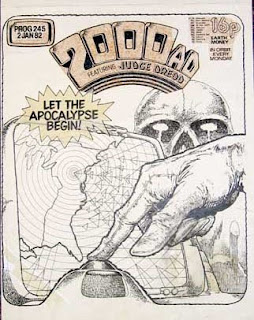 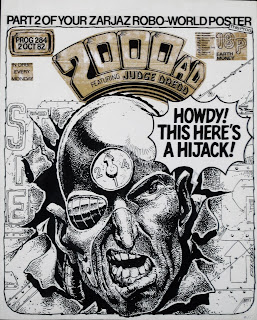 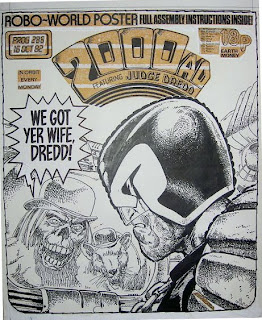 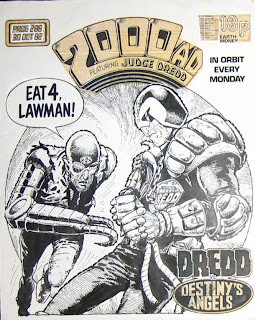 As well as chronicling Dredd's major developments and working on most major 2000AD characters, Carlos has provided almost 2000 pages of Strontium Dog artwork! Below we have Prog 339, possibly my favourite Alpha cover ever, and below that, the shocking cover of Prog 445 from the prelude to The Ragnarok Job, forerunner of the amazing Rage storyline. 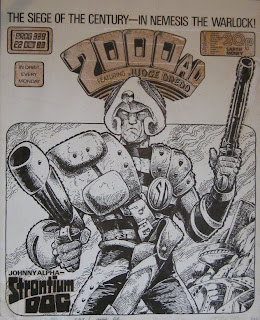 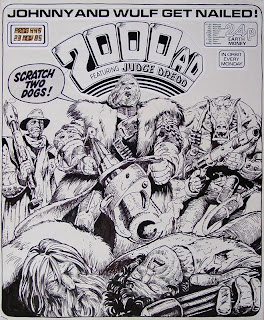 In recent years, Carlos has began using computers to colour his work. Below we can compare the painted cover of Prog 799 with the computer coloured version for the Judgement Day graphic novel... 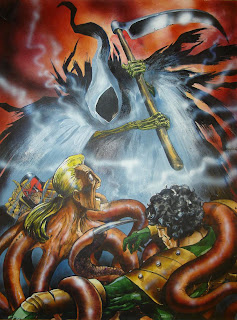 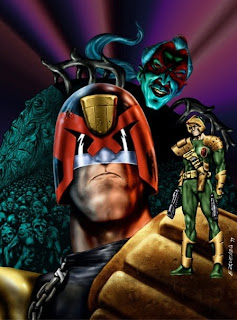 Here's the cover of Prog 1353 from the hilarious Tax Dodge story. 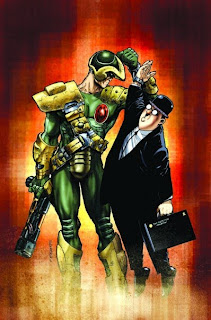 And here we have the prelims and inks from the legendary 'Three Dredds' cover of Prog 1380. 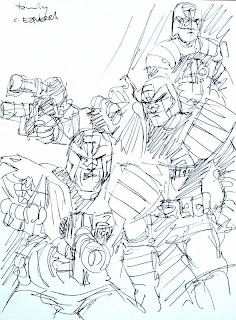 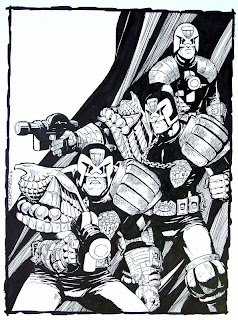 Finally, we have Carlos' latest co-creation, the outrageous Cursed Earth Koburn, a disgraced Judge who inhabits the Cursed Earth getting into all kinds of scrapes. The character is loosely based on Major Eazy, bringing this blog entry full circle! 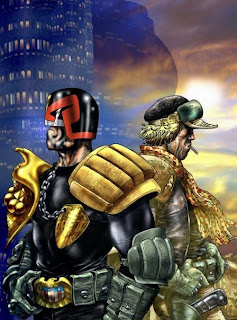 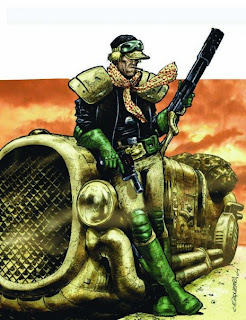 Great big fanboy thanks to Carlos for sending me the images and making me smile like a loon for an entire weekend and beyond! Long may he reign!
Posted by Pete Wells at 12:54