Richard Elson - Born to be Wild! Meet The Wild Bunch, a pack of genetically bred dog soldiers who take pride of place on the stunning cover of Prog 1652! These fantastic canine warriors are the new stars of the extremely popular Kingdom strip by the prolific Dan Abnett and the supremely talented Richard Elson.

Over the last sixteen years Richard has worked for a variety of UK comic publishers and made his 2000AD debut as far back as prog 564! Rich's epic visuals have been used to depict fantastic, large scale space operas such as Avatar and A.H.A.B and his superb creature designs have led to strips such as Lawcon and the universally acclaimed Kingdom.

Prog 2009 saw the debut of Marauder and a shift in Rich's artistic style. His line work was looser and as a result, the art seemed to crackle with raw thrill power! This style continues with Book 3 of Kingdom, the aptly titled Call of the Wild. Above is the beautifully coloured cover and below are the mind boggling roughs: 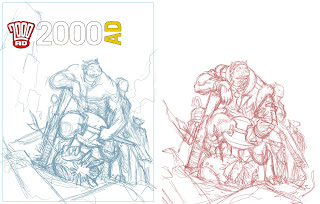 And the stunning inks, aaaaooooooh! 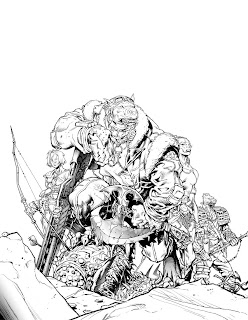 Huge, huge thanks to Rich for sending these!
Posted by Pete Wells at 11:45