"He saw you coming!" 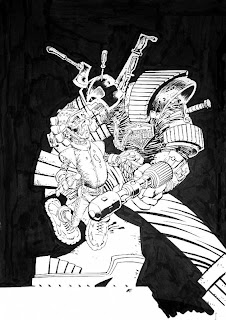 Imagine the scene, it's the tenth anniversary of the Judge Dredd Megazine and editor Andy Diggle gets one of the goddamn hottest comic artists ever to do a special commemorative cover. That artist was none other than Frank Miller, who was at his creative peak with his Sin City series.

Former Megazine editor David Bishop was in the command module as the art arrived as he was about to go for a farewell lunch with Dredd creator John (God) Wagner. Bishop says "I opened the package in Wagner's presence. His comment: "He saw you coming!"

Bishop sent an email to Miller expressing his disappointment and it was agreed that the cover would never be used. Two good tings come out of this sad little tale - one, the art was sold for more than $2000 for the Comic Book Legal Defence Fund and the other was that Diggle wrote Lenny Zero for free to fund the cover - giving the world not only a really cool character but more importantly, giving super artist Jock a big step up the artisitic ladder.
Posted by Pete Wells at 13:13