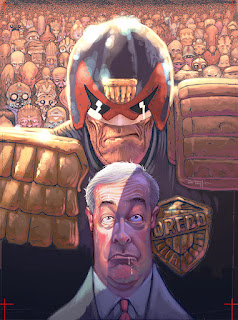 ﻿A momentous day in terran history approaches, a day when the inhabitants of Britcit vote on whether to stay in the Eurozone or leave. To commemorate this crucial event, scriptdroid Ian Edginton and artdroid Dave Taylor, introduce us to the odious little xenophobe, Bilios Barrage in Megazine 373's bonus Dredd tale, 'People Like Us.'

To accompany the story, the Taylor droid provided this hilarious cover. I reached out to Dave to tell us more about the curious little Brexit berk. He pulled up a chair at his local hardworking pub, chugged on a great British pint like millions of hardworking Britons that that built this great county, and whipped out the hardworking character study shown below, and said "A wee photoshop fiddle. Getting a sense of the malicious idiocy and combined dullness and boorishness in this creatures face. Tharg really didn't pay me enough for doing this. I'm still not fully recovered..." 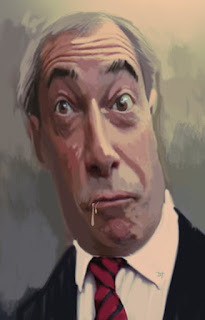 ﻿I hope that's drool or beer froth dribbling from it's rotten maw...﻿

Next the sketch for the piece; "Below is a sketch of what had been sitting in my head while doing the strip. Tharg, in his supreme wisdom requested I draw all of Dredd's mug. Fair enough. He is rather handsome!" 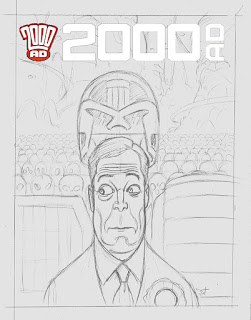 "A few pages from the ET design stage of the strip, which were also used on the cover, as anyone with some eyes can see. Some have said of me that I'm a fool for believing (knowing) ETs exist and are present in our skies, some have called me hero and champion (not really) for supporting the idea of at least being socially accepting of what shouldn't be called Aliens. I mean, come on...if you don't believe that we're not alone in the whole of what IS then I suggest you seek help." Yep, next people will be saying that Tharg isn't real... 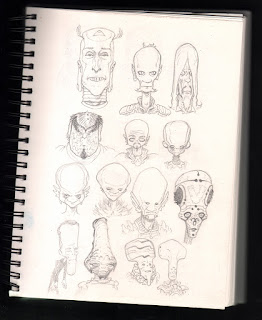 These immigrants are taking YOUR jobs, disgusting! 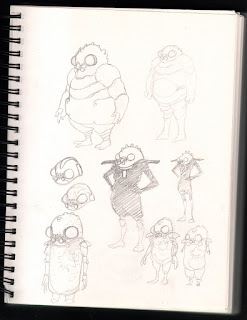 ﻿This immigrant is on benefits and lives in an eight bedroomed house with his 12 children by 13 different mothers - disgusting!

"The finished pencil drawing, which was then introduced conceptually to my computer and then I draw on the screen with crayons." This is true, poor Dave's mam has to come and clean his monitor each night while he is in bed with his teddy, Mr Pookems. 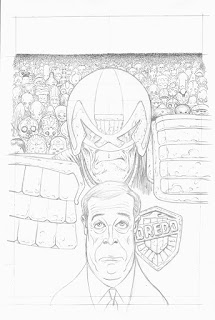 ﻿Dredd had pulled head lice duty this shift...
﻿
"Here I'm getting an overall feel for the finished piece. Took me three minutes. I don't expect to get paid for that." 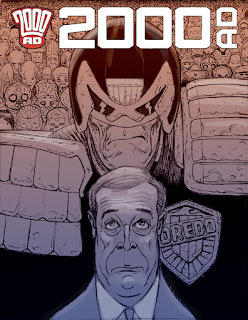 ﻿
﻿Hmmmm, Dredd noticed three little sixes...
﻿"Something happens when I press the keys on my keyboard and I hold the magic pen over the "tablet" which I believe strongly is called "flatting". Apparently that's a full time career now." I hope those who are not arty or computer geeks are keeping up... 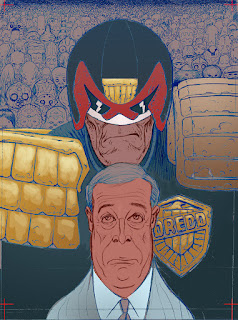 ﻿
"Youprick"
﻿
"I'm starting to build up the light in this one, finding where the play of light looks best and getting some depth into this damn thing." 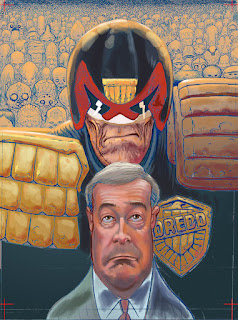 "Finishing the lighting here and tweaking. There's something I'm not happy with. Well, to be honest I could be here all night telling you what I'm not happy with, but I'll stay on subject as best I can. There's something I've lost in the creatures face (Tweaking is a real word)." However, this should NEVER be confused with twerking, Dave always gets the twerking out of his system before starting a job - Pete. 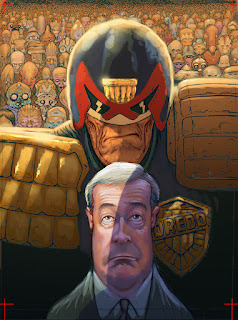 ﻿After this weeks' antics, perhaps he should be called Bilious Barge?﻿

"Bingo! I got the lighting and saturation right but still couldn't agree with that ugly fking face. I spent an hour or so "tweaking" and finally the monster was good. The monster was ready!" It's alive! Aliiiiive!!!! 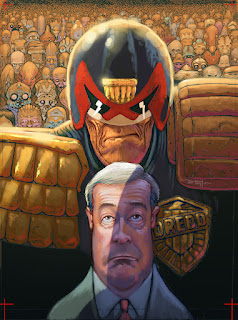 ﻿
2000AD Covers Uncovered takes no responsibility for feelings of nausea or rage you may feel when reading this article.
Clearly, Dave is just showing off now, he says "Sometimes you just need a close up..." 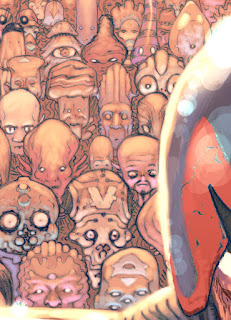 A photo of the Euro MP's taken from the latest Brexit propaganda.
And finally the Taylor droid adds "anyone feeling a little Trump? Not entirely by accident did I add a little Trumpacity to the face of the Creature!" As if he couldn't get any worse!﻿ 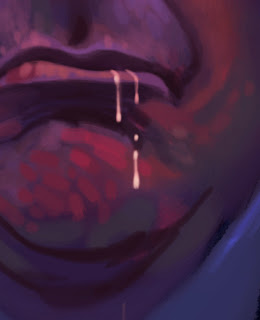 Perhaps he's sucking on a Fisherman's Friend...
So there we have it folks, the making of a wonderful cover by an artdroid at the very top of his game! Huuuuge thanks to Dave for sending the images and hilarious text, and for his patience over a stressful week.
And with that, an announcement...
Tharg the Mighty has decreed that this fine blog belongs at the home of 2000AD, 2000AD Online. Yep, I'm proud to say that from now on, my ridiculous ramblings will appear on the official site each week. Sadly, they will still feature the same shit jokes and awful puns each week, but will live there, instead of here. It appears my blog posts are doing a little Prexit of their own, the bastards.
I'll still be posting regularly on this blog too, artist specials and themed posts etc. and will link to my 2000AD Online cover breakdown each week so don't be a stranger, y'hear?
Posted by Pete Wells at 12:13